Lights out at Triple Tree

Approaching Triple Tree Aerodrome in Woodruff, South Carolina, a controller’s voice directing aircraft from Enoree—a small town east of the field that’s the last point on the published approach—to the downwind for Runway 3 was as welcoming as her words, “Welcome to Triple Tree.” The private aerodrome, made famous by its 7,000-foot-long-by-400-foot-wide manicured grass strip, camping facilities, and southern hospitality, opened its runway for total solar eclipse viewers Aug. 20 through 22.

A notice on the aerodrome’s website warned that the airfield wouldn’t be controlled because of the demand the eclipse has placed on air traffic controllers in the southeast who normally volunteer to staff the tower during its other fly-ins throughout the year. Pilots were instructed to fly the procedure and then self-announce at the airport.

However, a group of Cardinal pilots received permission to fly in on Aug. 19 as long as they volunteered to help during the event. That’s just what people do at Triple Tree—they volunteer to help in any capacity to make everyone’s visit enjoyable. So, the Cardinal pilots took turns providing advisories from the tower for the hundreds who flew in and out Sunday and Monday.

Curtis Berry flew his Cardinal from Hagerstown, Maryland, for the event and worked in the tower for two days. “It was a lot of fun,” Berry said, “Everybody seemed to follow the procedure inbound. 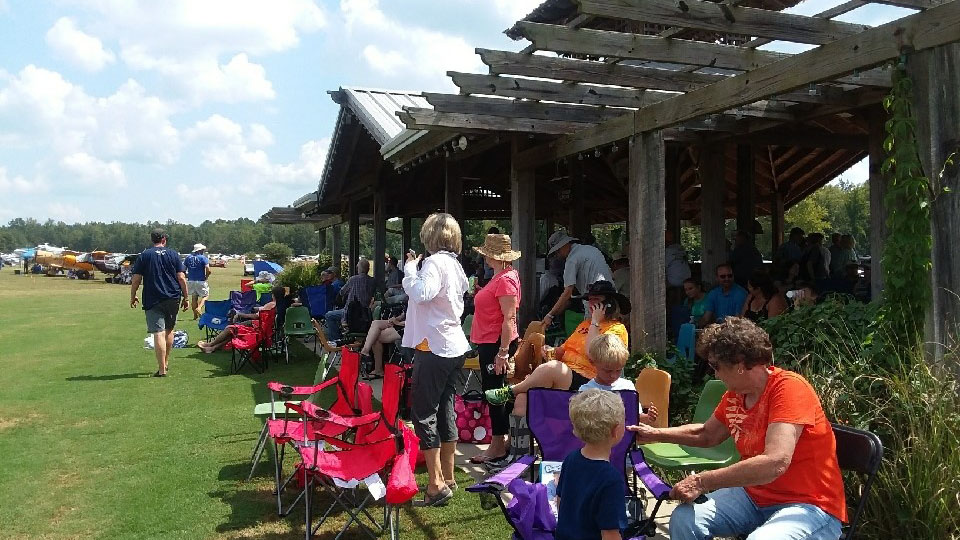 “From the tower, you can see the white tower [checkpoint] at Enoree,” he said, as he pointed out two aircraft on the arrival segment. They use binoculars, he said, to determine if the aircraft are high or low winged. Berry has volunteered to help at Triple Tree’s fly-in events in the past, but the job from the other side of the mic gave him a new perspective on the event.

“Oh there’s a lot to this,” he said, “It’s a well-organized thing. We’ll see how it goes leaving.” Berry finished his tower duties by mid-day Monday and planned to fly out after the eclipse, along with several hundred of the pilots who flew in just for the solar event.

Casey Matthews and his wife Nicol flew their neighbors Wayne and Cheryl Sherrill to Triple Tree in a Maule with a flight of four that included another Maule, a Decathlon, and a Warrior, and set up in the shade under the wing to wait for the eclipse. 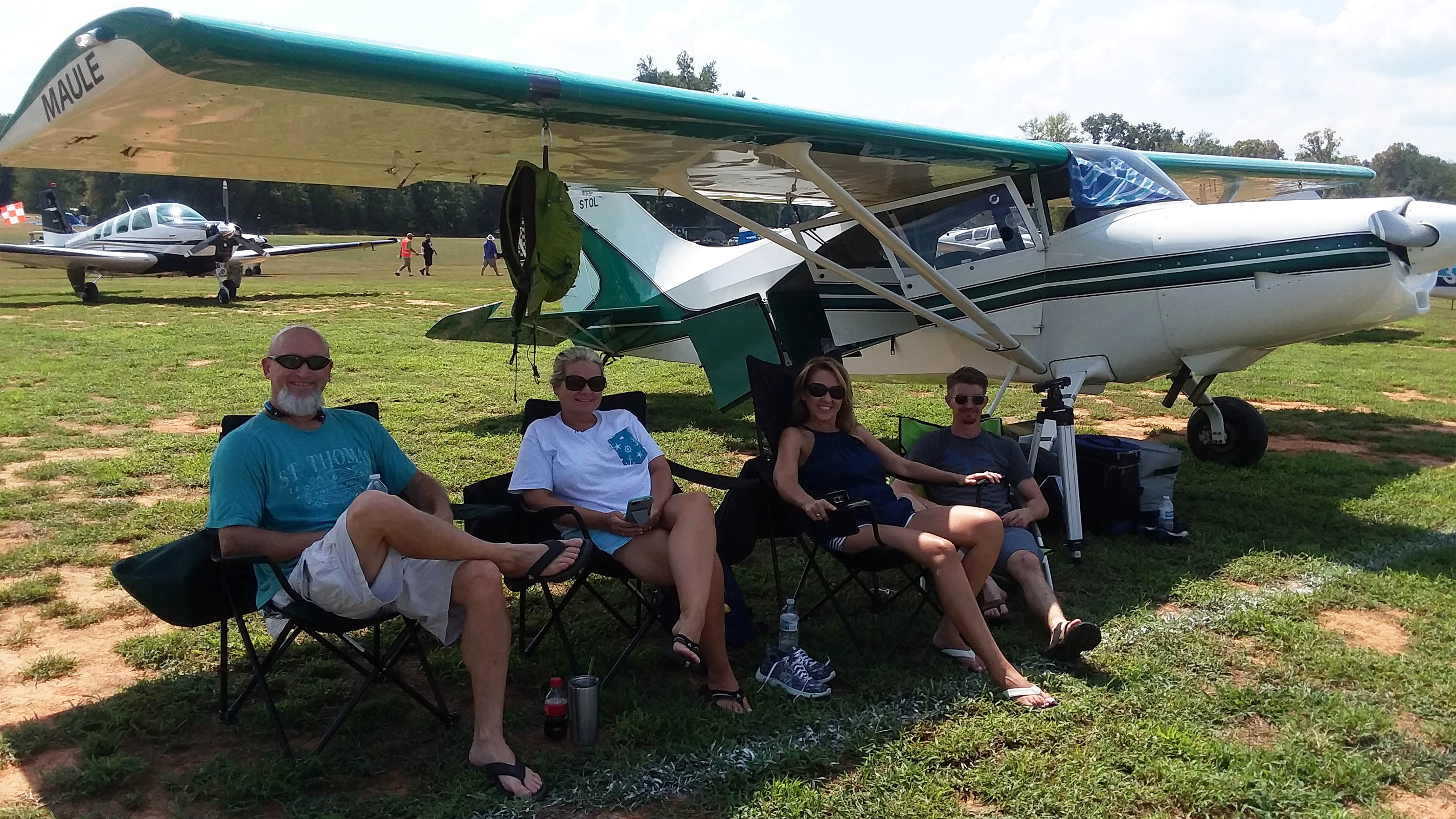 “This is one of the cool spots for it,” Casey said.

“We knew we’d be away from the trees in the open,” he said, adding, “and there’s airplanes here.” Casey and his wife are based at Lincoln County, South Carolina, just a 30-minute fight north of Triple Tree, and have camped here multiple times. It proved to be an unbelievable introduction to the general aviation culture for their neighbors.

“It’s better than sitting in traffic on 85!” Casey added.

Because attendees were gathered for the common purpose of watching the solar eclipse, actual talk of the eclipse waned until 1:10 p.m. when the moon began to cover a little sliver of the sun. Until then, perhaps the number one question was, “Is this your first time to Triple Tree?” 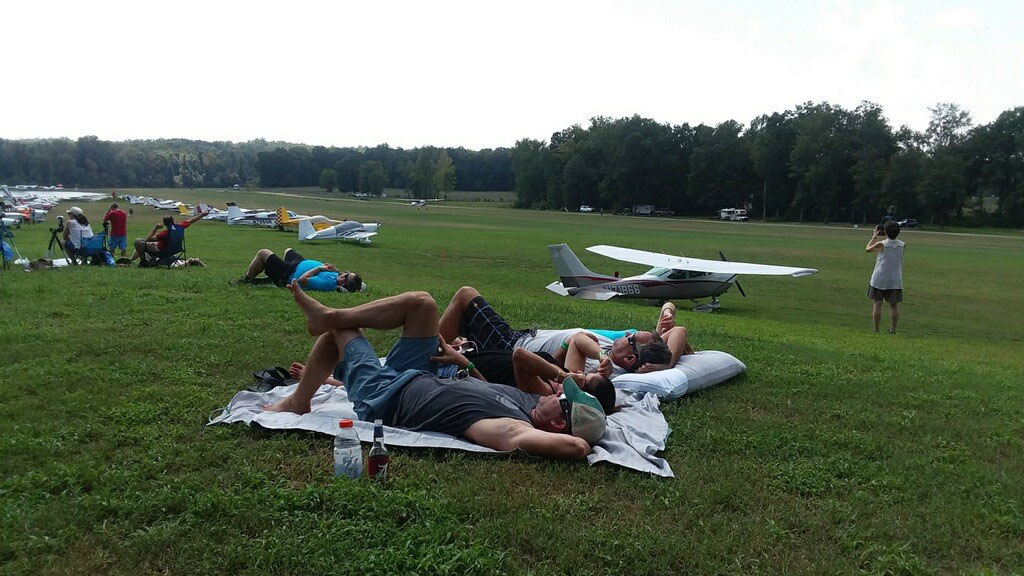 That’s because, at Triple Tree, there are only two types of pilots—first timers and returning veterans who have come to love and anticipate a relaxing few days camping under their aircraft wing, fishing, hiking, making new friends, and drinking in the first-class southern hospitality.

As the eclipse progressed, a few straggling aircraft coming in to land competed for attendees’ notice as young and old alike turned their gaze skyward to watch the moon start its slow march across the sun. At the point of totality, with only a bright ring showing around the sun, the crowd cheered as they looked up, the few clouds in the sky giving a hint of a sunset mid-day. As the sun reappeared, another cheer preceded the onslaught of rumbling engines as dozens of aircraft seemed to start up in unison for a mass exodus.

Diehard Triple Tree fans stayed put to watch the departures and head to a barbecue dinner and one more night of camping before returning to their everyday lives.

Those who’ve never been or who didn’t get the opportunity to experience Triple Tree during the solar eclipse don’t have to wait for another natural phenomenon to stop in.

“Hey Dale, see ya in two weeks!” one attendee exclaimed to his friend in the hot afternoon sun. Triple Tree will open its runway again Sept. 6 through 10 for its annual GA fly-in. 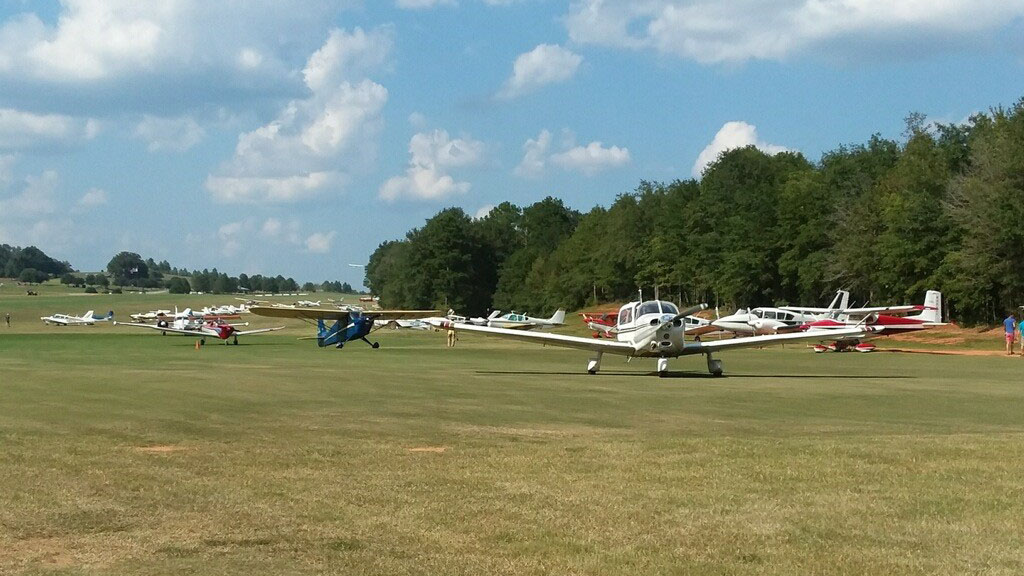