All in the family

Mike Hoffman played football for the University of Nebraska Cornhuskers the year ESPN declared the team “the greatest of all time.” Supposedly he has the rings to prove this, but it’s not something Hoffman discusses much; in fact, it’s something only his siblings brag about. Hoffman says these are the three things he’s proud of: family, aviation, and Huffy’s Windsocks, the company his mother and father started more than 30 years ago that supplies handcrafted windsocks to airports, facilities, individuals, and corporations around the world. His remarkable football career is just one of those things he remembers as part of his charmed life.

Charmed? Hoffman is married to his high-school sweetheart, and they have four smart and healthy children. The family lives on the farm where he grew up, in the 1903 farmhouse where he was raised. His parents have a home up the lane. Most mornings Hoffman takes the family’s Piper Super Cub up for an hour or so before beginning a day that will see his wife, Jacky, taking calls from happy customers; he’ll fulfill orders for windsocks to be mailed to places far from his Nebraska home, and he’ll enjoy long conversations with his father. A good day ends with a beautiful sunset over the thousand acres of his family farm, hay bales dotting the landscape and windsocks blowing in the breeze.

“I wake up every morning with a smile on my face,” Hoffman says.

Karen and Gary Hoffman are native Midwesterners. They met while they were in high school in the 1970s and became a team that worked the land and found ways to supplement their inconsistent farming income with creative ideas. Gary Hoffman—nicknamed “Huff,” can fix and make just about anything you can imagine—and imagines just about anything that can be made. He carved a grass strip from the acreage near the couple’s home and has populated the little airfield over the years with a variety of aircraft, from a Cessna 170 to a Grumman Traveler, a Super Cub to a Cherokee Six. One typically windy Nebraska morning, he showed a tattered and forlorn windsock to Karen, lamenting that he had only recently purchased the sock. “Can’t you make something better than this?” he asked his wife.

Well, don’t give Karen Hoffman a job if you don’t want it done right. This South Dakota native was soon making windsocks on her sewing machine. The couple took several of her homemade windsocks to a Flying Farmers convention to hand out as thank-yous—the pair have been on the board of the organization at several levels over the years—and a business was born.

Karen experimented with different fabrics until finally settling on a heavy-duty nylon that has a urethane coating and an ultraviolet-light inhibitor. Hiring local seamstresses in the small town of Spencer (population 440), Karen had them double stitch and band the material, which Gary cut from patterns he made. Their four children—Tony, Mike, Andy, and Julia—grew up hammering grommets into the tops of the various sizes of windsocks, and eventually Gary began making the brackets for the windsocks. Today Huffy’s Airport Windsocks manufactures 13 sizes of windsocks and the brackets that support them, as well as makes internally lit wind cones. Screen printing and fabricating brackets are done on the farm; at the shop in town the windsocks are sewn, packaged, and mailed. The family company can screen print your airport, airstrip, or company logo on any size windsock. They ship everywhere in the United States and have customers as far away as Dubai, Saudi Arabia, the Maldives, Nigeria, and Australia.

Several years ago, Mike and Jacky were living outside Omaha working corporate jobs and raising their kids in a suburban neighborhood (although Mike passed every farm dreaming about moving and putting in a grass airstrip), when his parents stopped by and broached the subject of their retirement and what to do with Huffy’s. Tony is married and has his own farm; Andy is an attorney and lives in Atkinson; and Julia had moved east. It didn’t take Mike and Jacky long to look at their 9-to-5 lives and Mike to think of that grass strip in Spencer, and to pack up everything and buy the business. Gary and Karen built themselves a new house even closer to the airstrip and sold the farmhouse to Mike and Jacky.

Down on the farm

Spencer is truly a one-horse town, and it appears maybe even the horse has left. The main street is quiet except for the occasional tractor trailer that passes through on Highway 281. Most storefronts are shuttered. Gary and Karen once opened a variety store here; it’s now a consignment shop. There’s a hair salon; a “general store” that sells trinkets, toothpaste, and beer; and Huffy’s. Inside there’s Jacky’s desk and a row of sewing machines along the wall. There’s a cutting table, packing boxes, a grommet machine (automation came to Huffy’s once the kids were grown), and a wall of packaged orange windsocks. 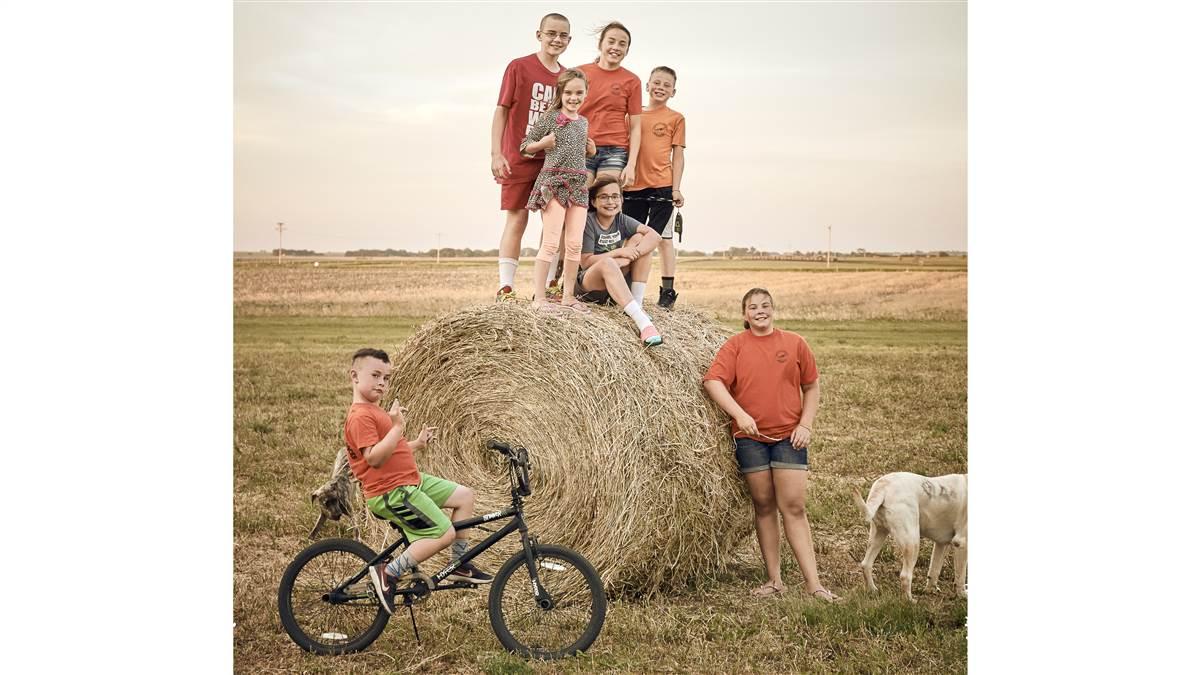 In 2013 the internet sensation was a little boy who ran a 69-yard touchdown for the University of Nebraska ’Huskers. He was Jack Hoffman, son of Andy and Bri Hoffman, and grandson of Gary and Karen Hoffman. In April 2011 Jack had a seizure and it was discovered he had a brain tumor. The prognosis was not good. He underwent two brain surgeries and 60 weeks of chemotherapy. A fan of Huskers player Rex Burkhead, Jack and his father had reached out to the star player with a wish to meet him. Burkhead became a member of Team Jack, the foundation the Hoffman family started to raise money for pediatric brain cancer. In 2013, not only did Jack and Rex become friends, but Jack ran a touchdown that broke YouTube records and won Team Jack the ESPY for the best moment in sports. Jack is now 11 and still struggling with the effects of pediatric brain cancer, but he’s an active little boy. The foundation continues to raise money for other children affected by this disease. If you want to be inspired, watch the video and visit the Team Jack website. —JSW

Seamstress Ann Mahlendorf has sewn windsocks for Huffy’s for more than 17 years. She is a master of a machine with massive thread cones, bobbins, and needles. She whips an eight-foot windsock through her sewing machine at breakneck speed—first up one side, then across the middle, and down the other. Quickly inspecting the seams, she folds it and puts it aside, and begins the next. She has to finish this order for the Nevada Department of Transportation before noon so she can go pick up her grandchildren. School’s out for the summer, and child care is hard to come by. Jill Heermann is working the grommet machine in the back, thankful this machine both makes the hole and affixes the grommet; she used to have to first punch the hole on one machine and apply the grommet on another machine. This one is much faster and easier (don’t tell that to the older Hoffman children, who still tell tales of hammering grommets around the kitchen table).

Mike and Jacky seal packages and label them, and take them to the post office. They leave Mahlendorf and Heermann and head back to the farm, where Mike will weld the brackets and sand and powder-coat them, and Jacky will start screen printing windsock materials in what was once a hog barn. With their four children out of school for the summer, sons Hudson and Hayden will follow their father around the welding shop, helping out and occasionally getting in the way. Seven-year-old Hayden usually throws in the towel early and heads to Gramma’s for snacks and TV time. Ten-year-old Hudson is his father’s shadow. Daughters Lauryn and Amelia do chores around the farm—this is a working cow-calf ranch with 85 pairs to feed and check on, as well as a row-crop farm of corn, beans, and alfalfa. The girls have rescued some turkey eggs from a sure breakfast for coyotes and are fiercely guarding and checking them in an incubator, hoping for baby turkeys to hatch.

After a full day of work, exercise, and playing on the hay bales, the children will visit with their grandparents while Mike and Jacky head back to the hog barn to finish screen printing an order of windsocks. They call it “date night.”

“We solve a lot of problems and get a lot of talking about life done here while we screen print,” Jacky says with a smile. Like Karen, she is also from South Dakota (the state line is just 10 miles from Spencer), and she also met her husband while they were in high school. She is a registered nurse but no longer practices, although she laughs and says she still nurses “kids, animals, and the geriatrics” up the lane. Like Mike, she’s embraced this life and never has looked back.

The Huffy’s Windsock family will be at EAA AirVenture this year, as they have been every year since 1985. In addition to the entire Hoffman family—Gary and Karen, and Tony and his family, Andy and his family, and Julia—Jacky’s parents will come, as will several of her nieces. All will camp out and help out at the two booths–one in Hangar A and one in Hangar D. Karen and Jacky will have a playful competition to see who will sell the most (the intrepid young Hoffmans also sell aviation-themed memorabilia and décor), and the end of each day will find Mike Hoffman with drink in hand, airplanes and family scattered about, and a smile on his face.