Get the app Get the app
Already a member? Please login below for an enhanced experience. Not a member? Join today
News & Media Aircraft Maintenance: Tips for prop tracking
Sponsored by Aircraft Spruce

Editor's note: This article was updated Dec. 11 to clarify forces acting on the propeller.

Thinking about the forces at work on an aircraft while it’s flying, we naturally think about lift, thrust, drag, etc. After all, the foundation of flight training begins with a focus on how these forces keep the aircraft in the air. 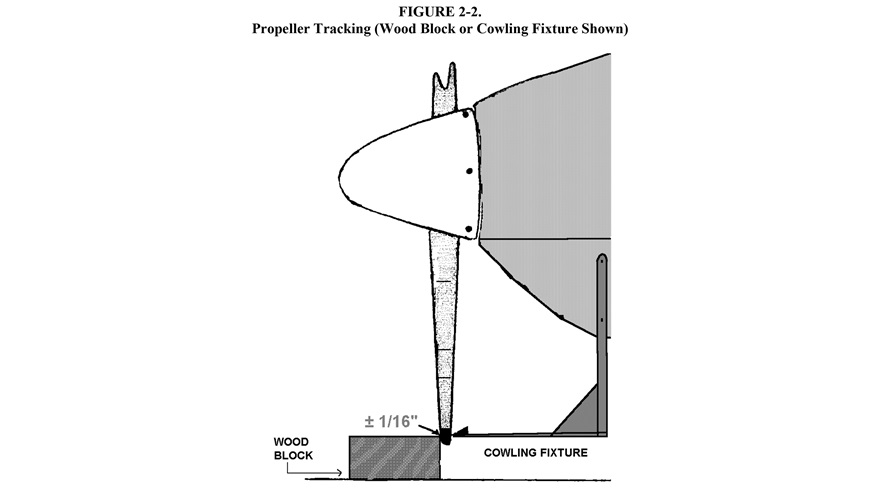 That’s great from the left seat looking forward, but from my “mechanic’s perspective,” I tend to focus to on the mechanical forces at work on the aircraft. Nothing rivals the forces placed on your  propeller.

Think of it this way: Your average general aviation aircraft produces about 200 pounds to 300 pounds of thrust to fly about 130 knots, and the structure supports from -1.52 to +3.8 times the gross weight of the aircraft when operating within the limits of the normal category. Those numbers are downright quaint when compared with the forces within which the propeller operates.

The typical GA propeller experiences between 10 tons and 25 tons of centrifugal force pulling the blades from the hub of the propeller during normal operation. The blades bend and flex as they claw the air from both the thrust and torque loads, and they also have to contend with vibration from the cyclic engine power pulses and other vibrations. And most of the sound that the airport neighbors complain about comes from the propeller tips as they travel at supersonic speeds during high-rpm takeoff operations.

Given the extreme forces at work, it should come as no surprise that it is imperative that propellers be in top condition in order to operate properly. Corrosion, cracks, wear, and other issues can compromise the ability of the propeller to meet its design specifications and, ultimately, cause catastrophic failure during flight. This is serious business.

Your best defense is a good offense in the form of routine preflight, postflight, and maintenance inspections of your prop. I’m particularly fond of postflight inspections because, by definition, they give you time to plan and execute any required maintenance without get-there-itis influencing your decision-making process.

According to the FAA’s AC 20-37E, "FAA data on propeller failures indicates that the majority of failures occur in the blade at the tip region, usually within several inches from the tip and often due to a crack initiator such as a pit, nick, or gouge." The combination of thickness, speed, flexing, and exposure to foreign object damage are greatest toward the tips of the propeller. There just isn’t much margin for error and abuse in that section of the prop when compared to the more robust and largely protected area near and including the hub.

Most propellers experience minor erosion on the blade face and leading edge during normal use. Our main concern is to look for more significant dings that show some form of deformation of the metal in the blade and anything with a sharp edge that can serve as a “stress riser.” This type of damage can cause cracks in the propeller, and it’s best to find them post-flight so they can be evaluated and addressed by a mechanic prior to further flight.

If the aircraft has a variable-pitch propeller, this is also the time to look for leaks and to gently flex each blade to check for looseness or inconsistency between the different blades. A small amount of movement is normal, but defer to your mechanic if you find inconsistency or have questions.

There’s another very important check that anyone can do to see if the propeller is bent or asymmetrically deformed in some way. It’s called a blade tracking check. Begin by rotating the propeller until one of the blades is pointing straight down. Now place a block of wood directly under the blade and mark the exact path of the blade on the wood. Leave the wood block in place and rotate the propeller to the next blade. Each blade should align exactly with the mark on the block. If the blade passes at a different location, it indicates that the blade has been bent in some way and should be attended to immediately by a propeller shop. This type of damage can come from moving the aircraft using the propeller as a hand-hold, rather than a tow bar. It’s a high price to pay for taking unnecessary shortcuts on the tarmac.

Next time, we will talk about what to do when you find damage, what amount of damage is too much, and how to go about fixing it. Until then…happy flying!