Get the app Get the app
News & Media Fly off: Bonanza vs. Centurion

Fly off: Bonanza vs. Centurion

A drag race over the California desert

There’s no consensus within this flying club—nor the broader general aviation population—on which of these classy six-seaters is the superior airplane.

“Pilots like me who learned in Cessnas typically gravitate to the 210 because it just looks and feels more like the airplanes they’re accustomed to,” said Jeff Provence, a long-time member of the 15-member San Diego Flight Corp., who strongly prefers the 210L Centurion to the club’s Bonanza A36. “It’ll carry heavy loads over long distances, and it’s an ideal instrument platform. It’ll fly an ILS like it’s on rails.” The club’s 1975 Centurion has been updated with a 310-horsepower TruAtlantic IO-550P conversion (which replaces the original Continental IO-520) and a Garmin G500 glass panel.

Takeoff distance over 50-foot obstacle: 2,130 feet: Bonanza/1,960 feet: CenturionDespite the upgrades, fellow club member Mike Roes would much rather fly the club’s sleek, low-wing Beechcraft A36. The 1992 model is powered by a 300-horsepower Continental IO-550 engine overhauled less than 300 flight hours ago, and it’s been modified with two 20-gallon D’Shannon tip tanks that extend its range and provide a gross weight increase.

“The Bonanza is more responsive,” Roes said. “It handles better, and its controls are better balanced and harmonized. It’s also got a big cabin door so it’s easy to load and unload mountain bikes and other bulky gear that I like to take on trips. It’s got exceptional speed and range, and the view outside gives me the feeling of being connected to the sky—not the ground.”

The San Diego club bought the two airplanes, and keeps them, and upgrades them, for the same reasons as other owners. Among single-engine, six-seat, non-turbo IFR travelers, these airplanes are the best of their breed.

Club members are charged the same hourly rate for each airplane—and the two airplanes fly about the same amount each month. Their engines also use the same spark plugs and oil, and club officials say total maintenance costs and dispatch reliability are about the same.

So, which of these IO-550-powered gems is the better performer? Does the Bonanza or Centurion take off shorter, cruise faster, or land shorter? We put them to a side-by-side fly-off, and here are the surprising results.

Jacqueline Cochran Regional Airport in Thermal, California, is 115 feet below sea level—and that’s where we’ve come for this contest. The airplanes taxi to the self-service fuel pump and we match their fuel loads with an even 60 gallons of avgas in each airplane. Two pilots of about the same combined weight are flying each aircraft, and there’s no baggage.

Number built: More than17,000 all variants Bonanza/9,300 all variants CenturionThe first side-by-side test is a short-field takeoff, and the airplanes stop wing-tip-to-wing-tip on Runway 35. This looks like a standard formation takeoff, but it’s not. It’s a drag race. And the point of the exercise is to see which airplane gets off the ground in a shorter distance.

At the Bonanza pilot’s signal, the two pilots bring the engines up to full power and hold the brakes. Then the pilots release the brakes at the same moment and the two airplanes surge forward. The Centurion, with its engine turning 2,700 rpm, accelerates faster and leaps off the ground sooner. The difference in takeoff rolls is about 50 feet, or just under two airplane lengths—but the winner is clear. Advantage Centurion.

Next, the pilots prepare their airplanes for short-field landings. There’s a steady, quartering headwind of about five knots. Both pilots use full flaps and do an admirable job of hitting their aiming points on the runway, but the Centurion’s final approach speed of 67 KIAS is about 10 knots slower than the Bonanza, and the Centurion comes to a stop in about 600 feet compared to the Bonanza’s 800 feet. The Centurion is the clear winner here, too.

The two airplanes take off together again and prepare for the aerial portion of this duel. Slow flight is first on the list.

Flying side by side with the landing gear and flaps up, the two airplanes decelerate to a critically low airspeed.

“We’re at 80 knots and 12 inches of manifold pressure,” the Bonanza pilot says as the two airplanes fly together side by side. Then, both pilots simultaneously close their throttles. The stall warning horns are sounding in both airplanes, but the Bonanza buffets and breaks first. Its nose drops, and once again, the Centurion is victorious.

We move to slow flight again, and this time the airplanes are dirty, with landing gear and flaps fully down.

The final test is a flat-out speed dash at an altitude of 7,500 feet msl. (Due to the high outside air temperature, the density altitude is more than 9,000 feet.) The two contestants are flying side by side about one mile behind the photo ship; then, on the Bonanza pilot’s signal, they go to full throttle at their maximum continuous propeller rpm. Both airplanes accelerate smoothly to about 178 KIAS, but the Centurion takes a slight lead of about five airplane lengths and maintains it as they streak ahead of the photo ship in less than a minute. We repeat the speed run again with precisely the same result. Winner, Centurion.

After landing, Provence, the Centurion pilot, is gleeful at his favored airplane’s clean sweep.

“I knew the 210 could take off and land shorter, and I truly believed it was faster, too, so it’s good to see all that confirmed,” he said. “I absolutely love this airplane.”

Provence says the Centurion gained both speed and efficiency from the TruAtlantic engine conversion. “It’s about 12 knots faster in cruise than it used to be,” he said. “It climbs better, and it can fly lean of peak at about 12 gallons an hour going 167 knots true. It’s a different airplane.”

Predictably, the results did nothing to change the minds of Bonanza aficionados. Roes still prefers the A36, but admits a grudging respect for the Centurion.

“The 210 is a workhorse, and it carries a heavy load,” he said. “But it doesn’t have the grace and refinement of a Bonanza, and it never will.”

This line of inquiry, of course, leads nowhere. The surprising conclusion of this contest was that in a battle of big-engine six-seaters, a modified Centurion not only holds its own against a stock, IO-550-powered A36. It beats it. 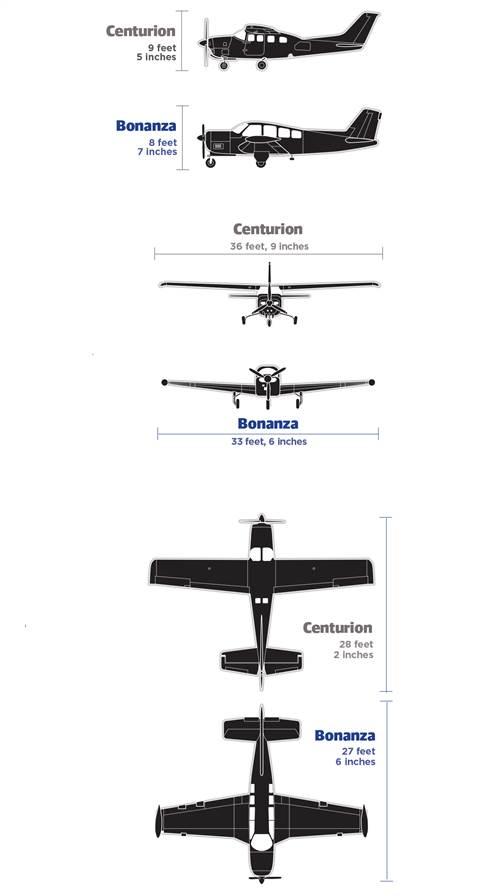 All specifications are based on manufacturer’s calculations and incorporate supplemental type certificates (STCs). Because of the wide variation in installed equipment and other STC packages, actual performance may vary from that shown. All performance figures are based on standard day, standard atmosphere, sea level, gross weight (at or below 3,650 pounds for Bonanza) conditions unless otherwise noted.