Get the app Get the app
AOPA will be closed July 4th, in observance of the Independence Day holiday. We will reopen at 8:30 am ET on Tuesday, July 5.
News & Media GoldMethod test prep challenges, motivates 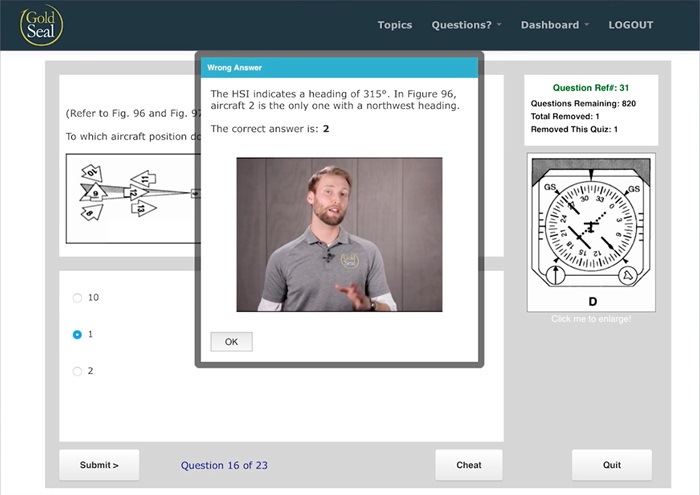 The new approach learns which test questions are the most problematic for students participating in the $99 online test prep course. Questions that are easily mastered disappear from the pool of hundreds of test questions while more troublesome questions reappear to reinforce learning.

“We’ve been in the flight training business since 2006,” said Still, “and were actually the first company to put a private pilot ground school on the internet. A lot of people don’t realize it but we were doing it before anyone else.”

GoldMethod’s intelligence-based software approach assists students with difficult material and avoids taking too much time on simpler concepts while preparing them for the demanding FAA Instrument Pilot Knowledge Test.

Still said that the system uses algorithms to actively watch how students answer a quiz. It monitors their answers and then decides what topics challenge them the most. “We spent months working on this” prior to the rollout, he said.

As questions are removed from a student's database, a gaming function allows students to move up a leaderboard, similar to the action at a golf tournament. Still explained that students are awarded gold stars and often compete online against each other as they gain knowledge and confidence. “I’ve seen them chat online and say, ‘I’m going to pass you tomorrow,’” which sets up a fun learning challenge and is an effective motivator.

The company pledges to reimburse students for the cost of the exam if they are unable to pass. Still called it the "You Pass or We Pay" guarantee. Students who complete the test prep course can generate a signed endorsement to present to FAA instrument knowledge exam administrators.

GoldMethod currently offers a drone pilot course and has plans to soon introduce a test prep course for students studying for their commercial pilot certificate.

“It’s extremely cool,” said Still. “The bottom line is that they just learn better and that’s the real goal.”