Get the app Get the app
Get the latest news on coronavirus impacts on general aviation, including what AOPA is doing to protect GA, event cancellations, advice for pilots to protect themselves, and more. Read More
Already a member? Please login below for an enhanced experience. Not a member? Join today
News & Videos Fields of gold

New tech is making a difference on America’s farms

Robby Schoepflin is flying his grandfather’s 1966 Cessna 172 low and fast along wheat fields in northwestern Idaho. The fields are shorn, and the only crop yet to be harvested on this late autumn afternoon is garbanzo beans. Dry and ready for harvest, they, like the shorn wheat, are yellow, gilding the landscape. The contrast between Schoepflin’s teal-and-white airplane and the yellow fields is like something from a Norman Rockwell painting—America’s farm belt on display in all its golden glory, and a man and his aircraft making holes in a brilliant blue sky. 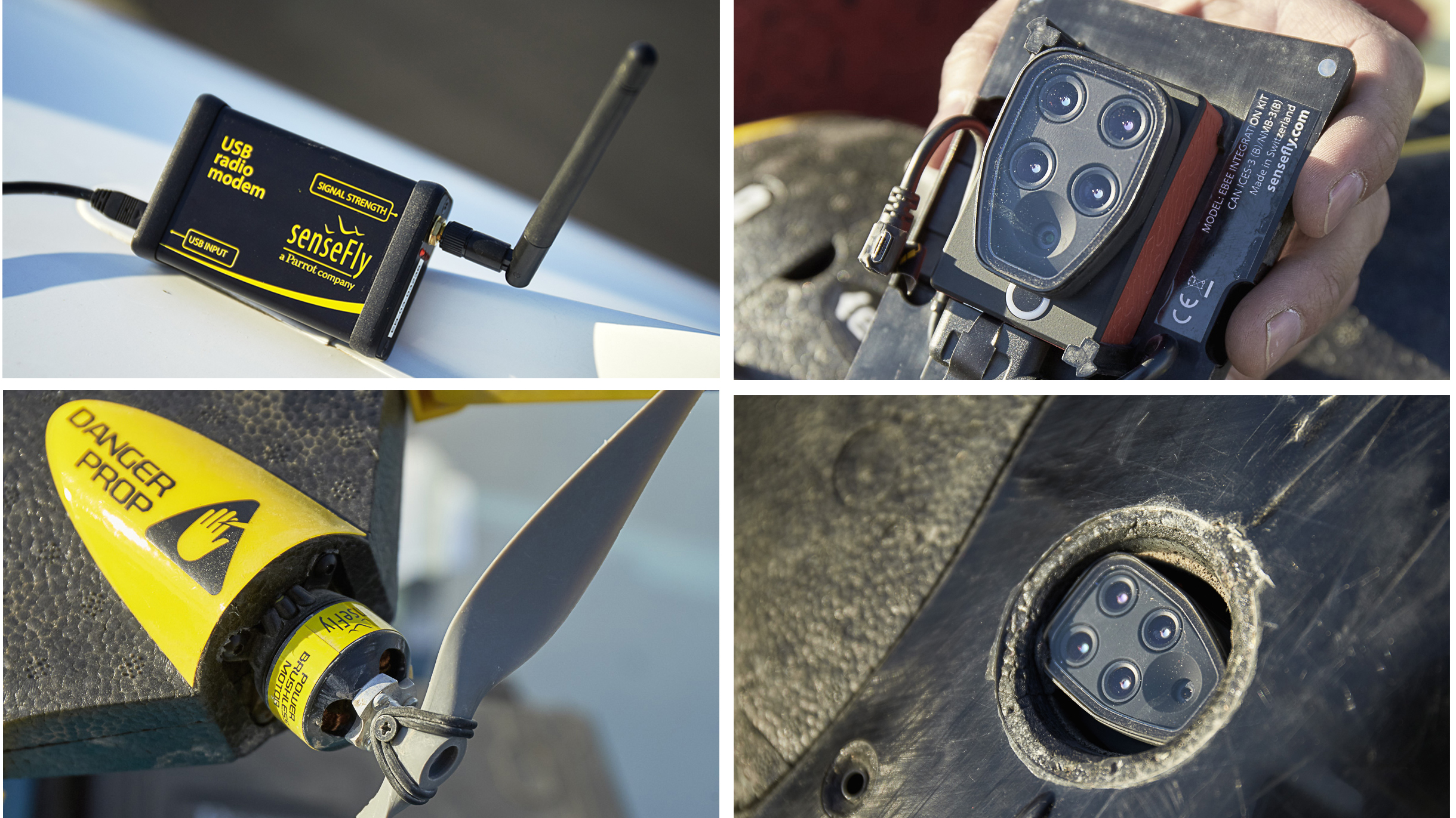 The SenseFly eBee Ag drone has an electric motor, rechargeable lithium-polymer battery, and rear-facing propeller. The drone is made of a light, engineered plastic foam, and weighs less than two pounds. Its 2.4-GHz radio link communicates with the eMotion software via a USB ground modem. The software displays the drone’s flight parameters, its battery level, and its image-acquisition progress in real time. Artificial intelligence inside the drone’s autopilot continuously analyses onboard IMU and GPS data to optimize the drone’s flight. A near-infrared (NIR) camera is standard but multiple camera options are available. NIR data is used to provide the normalized difference vegetation index, a numerical assessment of crop condition. Other cameras can compute indices such as chlorophyll estimation, create topographic field maps, measure water distribution, and check irrigation. The drone can photograph hundreds of acres in one flight.

Schoepflin grew up around aircraft on his father’s airfield in the Palouse, an area in southeast Washington and northwest Idaho. The origin of “Palouse” is unclear; it probably is from a Native American tribe, the Palis, and translated to roughly mean “land with short, thick grass.” The Palouse, situated north of the Snake River, is known for its fertile hills and prairies. But this geography lesson doesn’t matter much to Schoepflin, aside from the fact that he loves this land and married a girl from the Palouse here last year. It is even more meaningful because it’s where his father, Dale, built the airfield—Schoepflin Airport (WN26)—and Dale’s Aircraft Services. His father died at age 66 in 2015. The younger Schoepflin had bumped around the northern parts of the United States in various jobs before coming home to make sure his father’s legacy remains intact.

Schoepflin is a pilot and mechanic. He’s flown these fields most of his life. But now he has an additional role—he is a pilot for a company called Measure, which supplies drones for agricultural use. He was tapped for this job by local farmer Robert Blair, whose life in the wheat fields of Idaho has been turned upside down by this new technology—just as the young pilot’s has been.

Blair is a farmer. He is also, he says, an accountant, clerk, payroll manager, janitor, carpenter, veterinarian, and soil scientist, among other things. “A farmer is a jack of all trades,” he said. “I can’t afford to hire all those needs. I had one hired man and two boys.”

Had, until Measure approached him and wrote his new job description. But let’s back up. Blair Three Canyon Farms has been in Kendrick, Idaho, since 1903 and Blair inherited his 1,300 acres from his aunt and uncle. He grows wheat and legumes, just as his uncle did, but he has a different way of looking at things than his uncle. In fact, his uncle forbade him from using even a computer for calculations, and threatened to disinherit him if he did. All financials for the farm were written in longhand until the late 1990s. A graduate of the University of Idaho, Blair couldn’t stop thinking things could be easier.

In 2004, Blair flew over his farm for the first time in a general aviation aircraft. “I thought, wow, what am I missing from the ground?” he said. “This is the missing piece.” Then he saw an advertisement in a farm journal for a “crop cam,” a precursor to a drone. “I was the first farmer in the United States to use one,” he claims. Photos and local newspaper articles on the wall in his modest office suggest that he probably was. Blair and his two sons built his version of a crop cam soon after. “Farmers,” he said. “We build stuff.”

This began Blair’s interest and movement toward “precision agriculture”—which, using drones equipped with sensors and cameras, allows him to see every detail of his farm and the crops growing there. “It’s simple mapping; it’s using technology on the farm,” he said. “A farm is a business. I need to know what’s wrong, where it’s wrong, and when to do something. It’s different, but not upsetting. I actually look like a genius.”

When Measure approached him to oversee the agricultural sector of its business, Blair seized the opportunity. “I’ve had a lot more opportunities than most farm boys,” he said. At presentations he wears his overalls and carries a pitchfork à la American Gothic, and then changes to a business suit when he begins explaining how drones work on the farm. On this day, when Schoepflin is flying a Measure drone over his fields, Blair is describing their use to the agricultural attaché from the French Embassy. “I’ve had some interesting conversations I never would have expected in my life,” Blair said. He calls himself “crazily blessed.”

Directed scouting: Identifying problems before going to the field

Crop visualization: See crops from the air; the whole field

Crop yields: Amount of crop that was harvested per unit of land area

Precision agriculture: Use of technology to make management decisions on the farm

Proactive data: Capturing information before the fact; can effect change

Reactive data: Capturing information after the fact; too late to change

Remote sensing: Visual detection of circumstances with a drone

Surgical agriculture: Going beyond precision; manage even smaller areas, down to plant and leaf management

Yield monitor: Equipment on a combine or harvester that uses a sensor with algorithms to determine yield when harvesting

The Association for Unmanned Vehicle Systems International estimates that 80 percent of the commercial market for drones will be for agricultural use.

Drones such as the fixed-wing Sensefly eBee Ag drone Schoepflin uses in his work for Measure can cover 160 acres in an hour, collecting crop data via a remote computer using a software program called eMotion. Once launched—a flinging motion that involves the pilot holding the drone by its wings, leaping in the air, and vaulting the drone forward—the drone is monitored on the computer either by another operator or Schoepflin himself, if he is working alone. He keeps the computer setup in the back seat of his truck or on the truck’s bed. Schoepflin typically spends a full day on a farm.

Blair refers to the monitoring of his fields as “directed scouting.” Sensors on the drone identify weed species, show plant heights and population densities, and illustrate crop damage caused by animals. In the case of weeds and plant growth, the information can be used to immediately address the problem; the information is transmitted to combines and sprayers, directing them to problem spots and cutting down the amount of water or chemicals the farmer will need to correct the problems.

“If you can identify weeds before the crop canopy is over, then you can make informed management decisions,” Blair said. “Instead of spraying 100 percent of the field, I’m spraying 30 percent, because I’m spraying exactly where it is needed instead of across the whole field. That’s huge—to be able to identify those areas to treat before the treatment takes place.”

Blair estimates that other farmers could lower their chemical application costs by 10 to 25 percent using these tools. That could amount to tens of thousands of dollars in savings on an average-size farm, and reduce chemical runoff into surrounding uncultivated areas.

Blair has also used the drone technology to obtain crop damage payments. When Idaho and other western states began to reintroduce wolves, other animals such as deer and elk began moving into areas where they had not been seen before—such as Blair’s wheat field—causing more than $50,000 in damage to his crops. The photographs from the drone validated the claim.

“UAVs [drones] let us be proactive,” Blair said. “They identify and we go look.”

Schoepflin’s aviation background and his experience as an ag plane pilot are valuable to a farmer like Blair. He knows the fields and what he’s looking for. He’s also valuable to a company like Measure. “Rob’s being a private pilot allows us to get him in and out quickly, where driving would take time,” Blair said. Schoepflin has found his skills needed in states a long way from the Palouse: Florida, for example, where he flew the drone over lettuce fields.

Measure is among a growing list of companies that do not sell drones, but offer expertise in their operation to farmers like Blair, who wasn’t interested in owning and operating his own drone. The cost of commercial-grade agricultural drones starts at $10,000; with all the cameras, sensors, and software, the price tag could reach $40,000.

“It comes down to time and expertise,” Blair said. “When you start flying UAVs, it takes time away from your farming operation or from your family. Do you really want another job [learning to fly the UAV], or do you really just want the information?”

According to a report in Montana’s Great Falls Tribune, there has been some resistance, especially from older farmers, to implement new technologies. “However,” the report said, “if the threat to the American farmer is low prices and rising costs, then farmers must take advantage of every opportunity available to make their operations more efficient.”

“Farmers are curious about cost savings on their fields, but some are still skeptical,” Schoepflin said. “Everyone thinks it’s really amazing how far technology has come, when I can program a small flying machine from a laptop and throw it in the air while it does all the rest of the work, including landing.”

Blair says he sees a “new model” of agricultural production coming to U.S. farms, one that involves a collaborative approach where farms and farmers share technological resources.

“I enjoy my time in the dirt. I enjoy my time on the tractor, riding on a combine, and bringing in a crop that you’ve nurtured through the season, working with your family. There’s no greater job in life than that,” he said. “Precision agriculture is one way to ensure that both me and my children can keep doing that.” 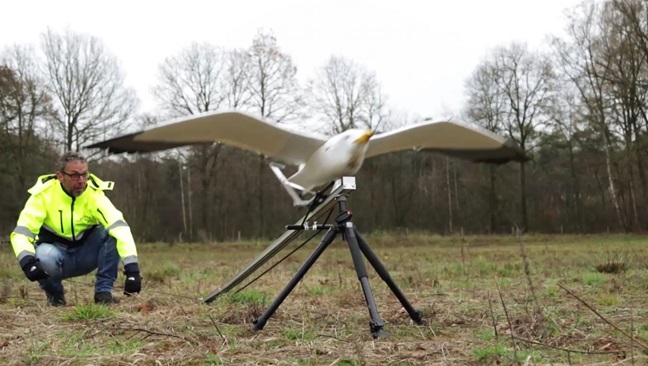