Get the app Get the app
AOPA will be closing at 2:30pm ET Wednesday, November 23rd, and will remain closed Thursday and Friday in observance of the Thanksgiving holiday. We will reopen Monday November 28th at 8:30am ET.
AOPA Members DO more LEARN more SAVE more - Get MORE out of being a pilot - CLICK HERE
News & Media Taxi troubles

A trip down a dark alley

Flying on-demand Part 135 airplanes can be a tough life, with pilots often spending their day waiting for that firefighter-like call to swing into action—calls that always seem to happen near the end of the day. We fly in all kinds of weather, often into unfamiliar airports at a passenger’s whim, but this Uber-like service is why we exist. 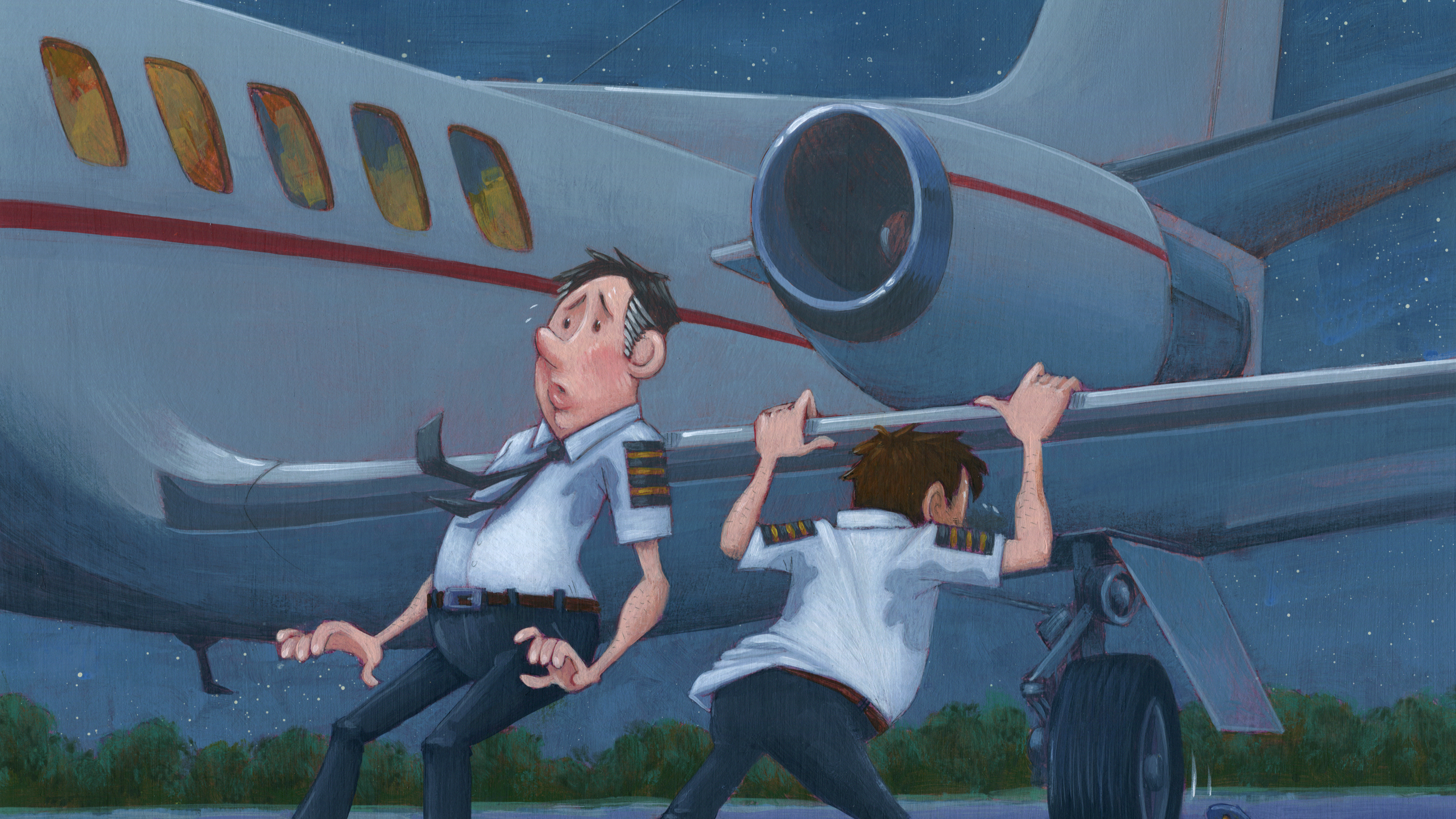 I’d just walked in my back door under a beautiful starry sky, so all seemed right with the world when the pager went off around 11 p.m. The scheduler said Tommy and I were headed out in the company’s new Citation S/II—new to this company, at least. The trip would be easy: Depart the Waukegan, Illinois, airport; drop one passenger at an airport in central Michigan; and come home. A quick weather check said it would be as beautiful a VFR night in Michigan as it was in Chicago.

Since the trip over was my leg and I’d already checked weather, the only thing left was a look at our airport destination, where our passenger said his wife would be waiting in her car on the ramp. It was a single-runway, non-towered field, so it should be easy in and easy out. Climbing away from Chicagoland, we could already see the lights lining Lake Michigan’s eastern shore. In the descent, Tommy tried calling unicom, but since it was nearly 1 a.m., no one answered. The winds were calm, so I chose to land straight in on the nearly 5,000-foot Runway 9.

Tommy clicked the microphone a few times to make sure the runway lights stayed on, which we needed since there weren’t any other lights even remotely close to the airport. The touchdown was hard, characteristic for me in this airplane. The S/II had a different wing that the other Citation IIs we usually flew, and I just never seemed to get the hang of the darned thing. Next time, I guess, I thought as I turned south off the active runway.

After much grunting and shoving and heave-hoing, though, the darned thing started to move…slowly.I left all the landing and taxi lights on and slowly came to a stop on the taxiway. This place was dark—really dark. No taxiway lights, just green reflectors sticking up on plastic poles to outline the way. “We’re taking it easy,” I said, with Tommy quickly nodding.

“There,” he said. “Aren’t those headlights?” Almost in response, the headlights flashed. I flashed the taxi lights in response, feeling confident now on where we were headed. There wasn’t much room to turn the aircraft, but I managed to get it pointed outward from the ramp before I shut down. Our passenger was eager to be gone and we were soon watching his car’s taillights disappearing down a dark road. I used our big Maglite for the walk-around as Tommy climbed into the left seat for the trip home.

With both engines spinning, Tommy taxied out. We’d decided to depart west, which meant simply reversing our taxi back in—which is, of course, what we thought we were doing. But with nothing except reflective tape on some sticks, the going was slow. I looked down at the approach plate to be sure I had the correct frequency dialed in to call the center after takeoff. When I looked up, I almost felt a bit of vertigo, since the path ahead looked different from what I was expecting. It looked like buildings appearing in the lights.

“What the heck is that?” I asked Tommy.

“We’re OK,” he said. “I remember seeing that coming in.” I think the quizzical look was still plastered on my face as the airplane stopped. “Uh, oh,” he said. Definitely buildings. We’d made a wrong turn somewhere and were now pointing down a narrow taxiway with T-hangars on our right. As we both looked at the buildings around us, Tommy did the smart thing by setting the brakes and shutting down. Climbing out with the Maglite again, we looked ahead and saw the dead end. The taxiway was maybe half again as wide as the Citation’s wide gear stance.

There was no clear way to turn the airplane around—at least, no way we could see where we wouldn’t fall off the edge of the taxiway. So much for getting into bed early, I thought. Of course, we also had no idea how we’d even call anyone for help at 1 a.m. We looked at each other as we circled the airplane again, flashing the Maglite in all directions—as if, by chance, it might point us toward the way out. No such luck. “Well,” Tommy said, “We could try a three-point turn.” I looked at him a bit quizzically.

“We start up, then I crank in a hard left turn with you outside. All you do is stop me before I go off the pavement. Then just before I shut down, I’ll cock the nosegear full right.”

“And then we do what, exactly?” I asked.

“We push it back until we’re almost off the pavement going backwards.” It was about 1:30 a.m. in Michigan, but this kind of made sense to me. A few minutes later, we tried the turn, me acting as ramp agent. When Tommy shut down and exited the airplane, we walked over to the back end to see how far we could push the jet and stay on the pavement. We figured about 10 feet, so I marked a spot by tossing my hat down under the belly, so we could both see it while we were pushing.

Even light on fuel and with no people aboard, pushing a Citation is nothing like shoving around a 172. After much grunting and shoving and heave-hoing, though, the darned thing started to move…slowly. We saw our mark and stopped pushing the jet. It stopped almost immediately. Tommy hoped back in, fired up the right engine, and repeated the three-point turn procedure. We almost made it out on the first try, but we had to shut down and push one more time.

Finally, as we taxied out, it became clear how we missed the turn. But I was more amazed at how we’d gotten out of this mess. For months after that, when Tommy and I would see each other in the crew room, one of us would ask, “Been to Michigan lately?” and laugh.

Rob Mark is the publisher of JetWhine.com.