How to fly a jet pack

A decades-long effort to produce a practical jet pack for civilian use (or otherwise) is closing in on completion, and the JB-10 by JetPack Aviation could reach customers before the year is out. At least it could reach those willing and able to pay $250,000 to fly like James Bond. JetPack Aviation CEO and test pilot David Mayman, arguably the most experienced jet pack pilot in the world, if not the only experienced jet pack pilot in the world, gave AOPA a briefing on how to fly a jet pack. 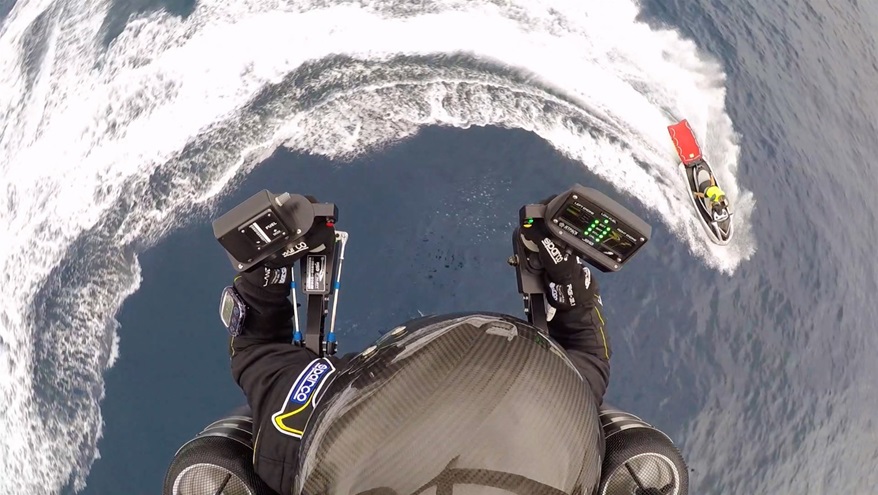 The left-hand grip is connected to ducts that direct the engine thrust left or right to create or halt rotation. Photo courtesy of JetPack Aviation.

Mayman, who keeps a busy travel schedule, obliged with a phone call from Australia, though most of his jet pack time has been logged in California, where the JB-10 was designed and tested.

Mayman has in recent years hit the road with his jet pack. He flew the company’s previous prototype, the JB-9, around the Statue of Liberty in 2015, and has shown off the newer JB-10 more recently in London; Monaco; and Long Beach, California, after which an observer wrote in December that Mayman “just made it look so easy.”

Turns out, there is a little bit to learn before strapping on an 80-pound package that includes two turbojet engines, and their fuel and controls. Thick socks and sturdy boots are a very good idea. More on that in a moment.

Mayman said he is training two future jet pack test pilots, one an experienced aviator and the other not so much. This training to date suggests that aviation experience does not necessarily give one a huge advantage in learning to fly a jet pack, because flying a jet pack is difficult to compare to any other form of aviation. There are a few similarities, or at least familiar qualities a pilot might find, between jet packs and helicopters. (Mayman holds an FAA commercial pilot certificate for fixed-wing, as well as rotorcraft pilot certificates issued by Europe and Australia.)

“I have flown a bunch of different things, but none of it really helps when you’re flying a jet pack,” Mayman said. He noted that pilots do have some advantages over nonpilots, having been taught a disciplined and careful approach to aviation, including aeronautical decision making.

Just don’t expect those stick-and-rudder skills, or even the cyclic-and-collective skills that you’ve mastered, to translate to a jet pack. 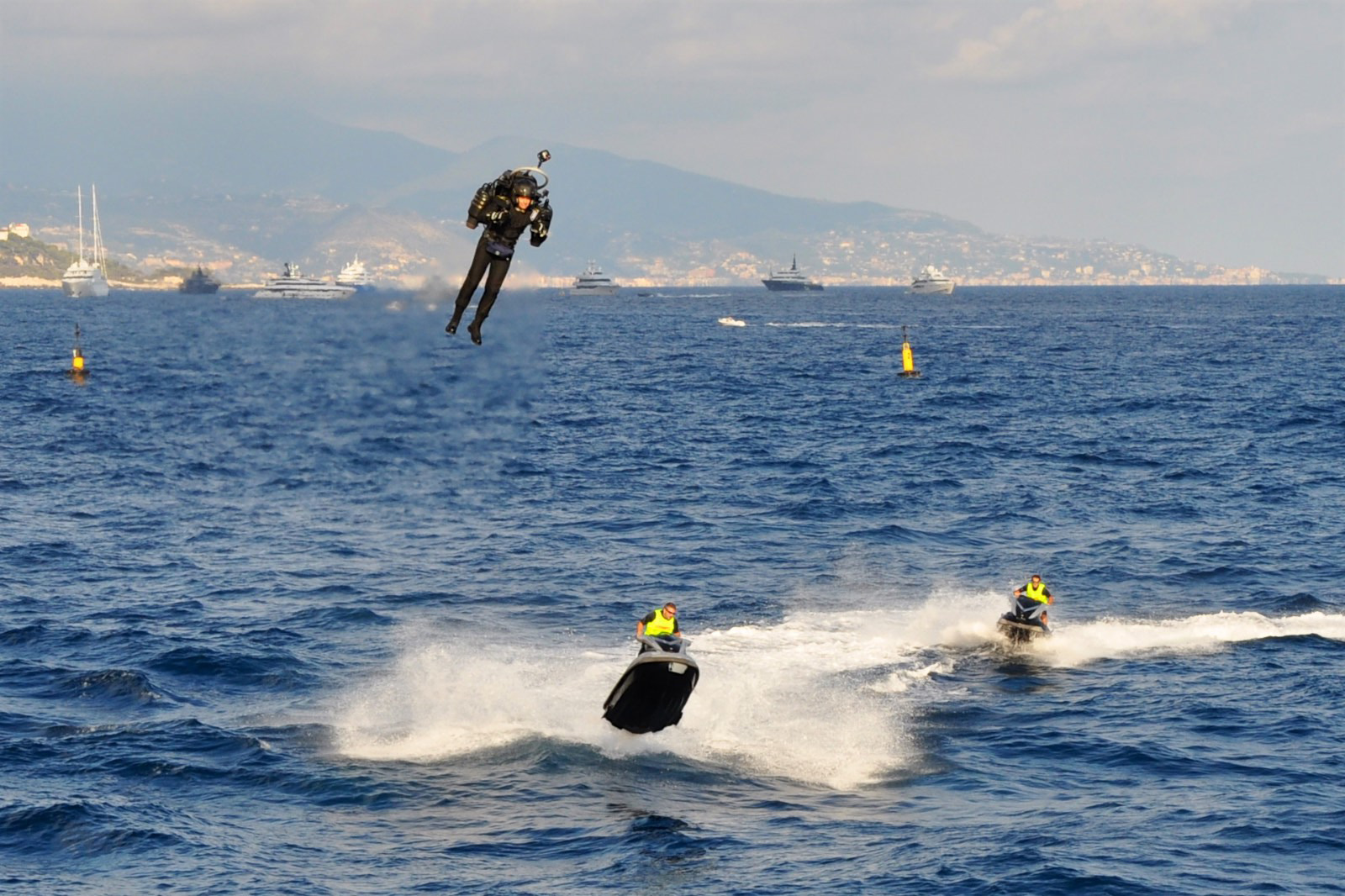 If your intuition tells you that having a pair of turbojets spool up while strapped snugly on your back might make it a hot time for ankles and legs, that is good intuition. Mayman said he learned long ago the value of thick socks and sturdy boots, though it’s only during startup and liftoff that the JB-10 blasts jet exhaust on the pilot’s extremities. Once airborne, “If you fly properly and in balance you could actually wear shorts because there’s no heat,” Mayman said.

The JB-10 and the JB-9 that preceded it were the first versions from designer (and Mayman’s longtime collaborator) Nelson Tyler with which Mayman “felt comfortable about leaving the Earth and flying so low without any safety wire or anything else,” the test pilot and CEO recalled. As for the previous prototypes, “they were exercises in trial and error, let’s say.”

Tyler has many patents to his name, and is well-known in Hollywood and beyond as the designer of sophisticated, stabilized camera systems. A pilot himself, Tyler has worked since the 1970s to design a practical, personal jet pack, and Mayman said he has harbored the same dream himself for 25 years; the pair have worked together for many years, testing and designing the JB-10 and its precursors. They more recently added more members to the team, and conducted public demonstrations including a Statue of Liberty flight in 2015, and in 2016 showed off the JB-10 in Monaco, and London, demonstrations recorded on video and intended to whet the appetite of potential customers and investors.

Mayman said the JB-10 is basically, from a technological and design standpoint, ready for the market (a market that he and Tyler hope is out there). There is just one small problem that may take some time to sort out: The JB-10 does not fit any available classification or regulatory scheme for aircraft. It is a twin jet with no wings, or fuselage. No such thing has been flown by or sold to the public (though jet packs do have a surprisingly long and rich history, with appearances in film, Olympic opening ceremonies, and military trials.)

The FAA has so far been cooperative, inquisitive, and at times a bit perplexed, Mayman said.

“There’s a lot of sort of head scratching going on at the moment,” Mayman said. “We’ve been having discussions with the FAA about how to progress under the experimental category.”

Another option might be 14 CFR Part 103, which governs ultralights, though the JB-10 does not quite fit there, either. It has potential to achieve horizontal speeds of 100 mph or more, and also needs more than the five gallons of fuel allowed by Part 103 to achieve still-modest flight times of about 15 minutes. Mayman said some at the FAA have suggested that a pilot certificate of some kind—and even a type rating, because the JB-10 is powered by twin turbojets—might be appropriate. That would certainly limit the potential market, while a typical type rating would do little to improve a pilot’s jet pack skills.

Mayman said that from the company’s perspective, some type of formal training is entirely appropriate. Conversations with various FAA officials are ongoing.

“We don’t want to ship this thing off in a crate with a note that says, ‘Best of luck,’” Mayman said. 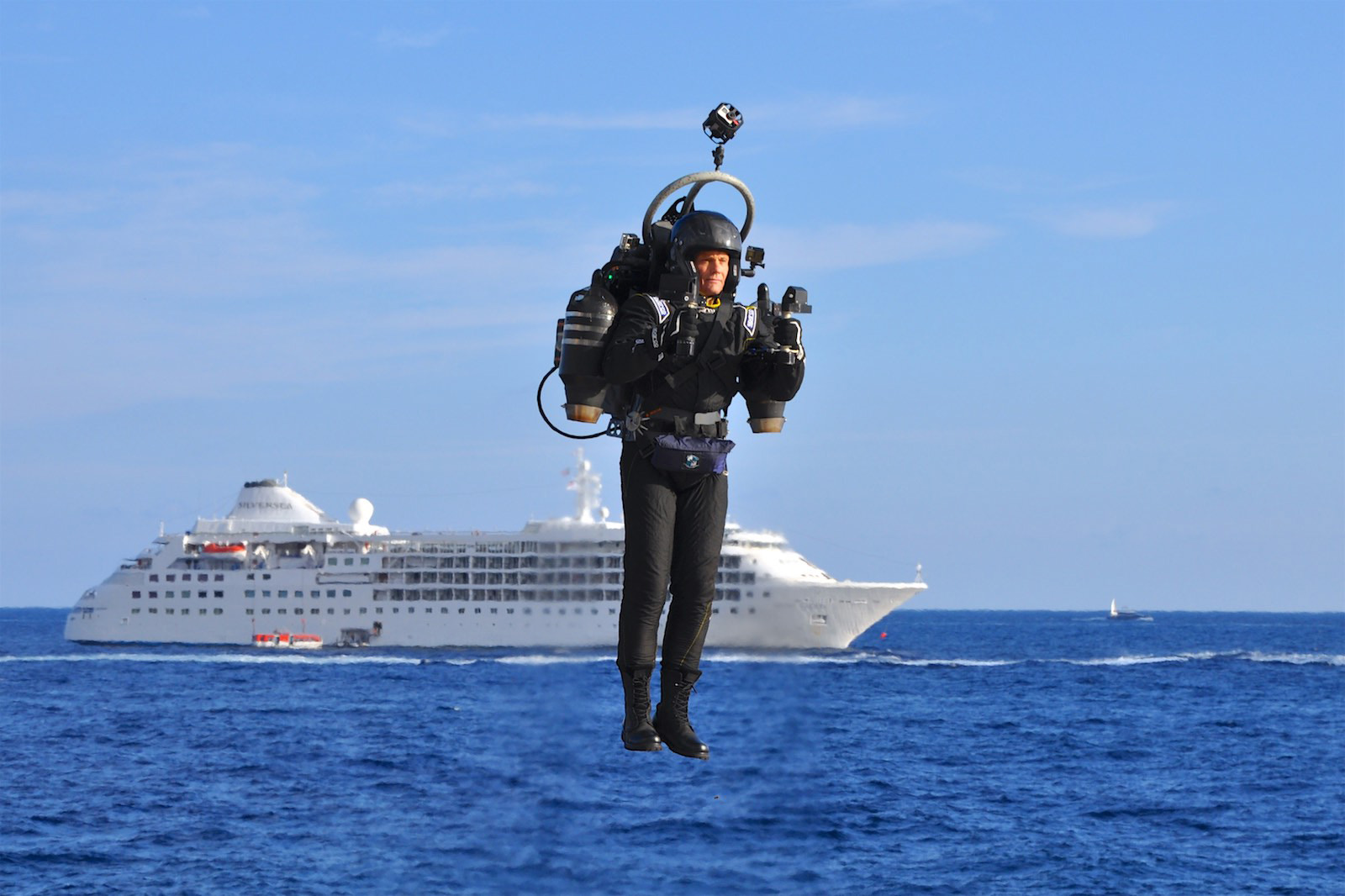 Engineers of more traditional forms of aviation have created many technologies that make the JB-10 flyable with relatively little instruction. The turbojets are made by turbine maker AMT Netherlands (which proudly features a JB-10 video on its own home page). They are controlled by a nearly automated system, full authority digital engine control (FADEC) that is condensed, for the pilot, down to a throttle, a simple display, and a three-position switch: off, on, and start. Indicator lights confirm normal function or alert the pilot to any malfunction.

“If you have everything in green, you’re good… anything in amber you should probably take a look at, and anything in red, fly another day,” Mayman said.

A rack designed to hold the jet pack in position for donning also allows the pilot to be unburdened while fueling and preflighting the machine, and that inspection also is straightforward: check engine mounts, control links, electrical connectors, and harness. A dipstick can confirm fuel level displayed on the gauge.

Before flight, the pilot should survey the area for hazards and warn spectators to back up and consider ear protection.

Once those Nike turbojets start, there is an automated self-check and system diagnosis, and the pilot is soon informed of the results based on light color. The engines idle about 20,000 rpm on the ground.

Given green lights, and an absence of overhead wires; large, angry birds; or low-flying air traffic, it is now time for the fun to really start. “There’s actually really no warm-up period required,” Mayman noted.

Two flight control arms extend ahead of the pilot, each fitted at the end with a vertical hand grip similar to a motorcycle throttle. The right hand grip is the throttle, and the left grip controls ducts that direct the jet exhaust left or right. This twist grip is somewhat analogous to the pedals in a helicopter that control the tail rotor, in that it is used to create or counteract rotation around the vertical axis.

“This is where, if anything, it’s like flying a helicopter,” Mayman said of jet pack takeoffs. In a helicopter, “as you come up on the collective you make sure everything is staying centered … it’s the same in the jet pack. If it’s trying to spin or torque a little bit to the left, then you would use your left hand control grip, which ducts the thrust ... on each engine … if you want to spin to the left you twist the grip to the left.”

Forward motion is achieved by leaning forward, which causes the pilot’s arms to press down on both control arms. That, in turn, tilts each engine. Raising the control arms together tilts both engines so the thrust vector moves in front of the pilot, slowing forward speed or increasing backward speed, though that might not be the best idea, because there is an obvious advantage to seeing where one is going when flying a jet pack.

The engines are mounted on a gimbal behind the pilot’s head that also allows them to move independently up and down (toward head or toes) to control roll.

Mayman said all of this comes very naturally. There are, however, a few less-intuitive things one needs to know before powering up to 59,000 rpm.

At altitudes below 10 feet, the engines are both breathing in a lot of their own exhaust, due to recirculation. This, Mayman said, “degrades performance significantly.”

It might be counterintuitive for pilots of both fixed-wing and rotorcraft accustomed to a little extra lift in ground effect to discover that the jet pack gives exactly the opposite. Once above 10 feet, “you get the power that you would expect,” Mayman said.

“I like to go straight up to at least 10 or 15 feet just to be sure that I have power before I transition forward,” Mayman said. He otherwise tries to keep some horizontal motion going. “It’s similar to a helicopter inasmuch as, if you can help it, you’re trying not to do a vertical climb/descent.”

Mayman said another concept familiar to most pilots and useful with a jet pack is to lead with power. Since forward motion is created by dividing vertical lift (produced by the jets) into a combination of horizontal and vertical lift, a jet pack pilot should add some power before vectoring the engines for a change in horizontal motion.

The reverse is true when reducing horizontal velocity and transitioning into a hover, such as during approach and landing: Anticipate the extra vertical lift that will result as less thrust is directed horizontally, and reduce power accordingly.

As for controlling the motion vectors, roll, and rotation, “it’s nearly instinctive to do that,” Mayman said.

Mayman said both of his protégés are "doing fine." He thought of another aspect of aviation training that may help a jet pack pilot: situational awareness, and a strong grasp of 3-D space and motion.

Pilots, he added, have already been taught that “if the horizon is dipping to the right, you just need to do something to fix this … let’s not overthink it.”

Assuming that regulators continue to cooperate and remain generally supportive of bringing the JB-10 to the masses (at least, those who can afford an expected $250,000 price tag driven in large part by the need to customize the engines and fuel system), Mayman said the JB-10 could be sold to the first customer as early as the third quarter of this year.

For those who might wonder what the practical value of such a contraption is, Mayman notes that the company has signed a cooperative research agreement with the U.S. Navy, which has applications in mind he can’t really talk about. Future versions might have external load capacity that would make them suitable for search and rescue, or similar missions. Fully automated controls could increase the potential utility—and market. An electric ducted fan version is already being developed, the JB-11.

While the jet pack may never be anyone’s everyday driver, it could be a technology with tremendous potential in certain niches. Mayman also is courting law enforcement and emergency responders who could use a jet pack to swoop quickly into a hard-to-reach area and then simply drop the pack and get to work.