Get the app Get the app
Get the latest news on coronavirus impacts on general aviation, including what AOPA is doing to protect GA, event cancellations, advice for pilots to protect themselves, and more. Read More
Already a member? Please login below for an enhanced experience. Not a member? Join today
News & Media Up-and-comer: Anthony Oshinuga

A struggling aerobatic pilot who never gives up

Pay attention. That Cessna 170 pilot narrating your flight over the vineyards around French Valley—the other wine country in California—may well someday show up on the Jumbotron at a Red Bull Air Race, Reno Air Race, or your favorite airshow. 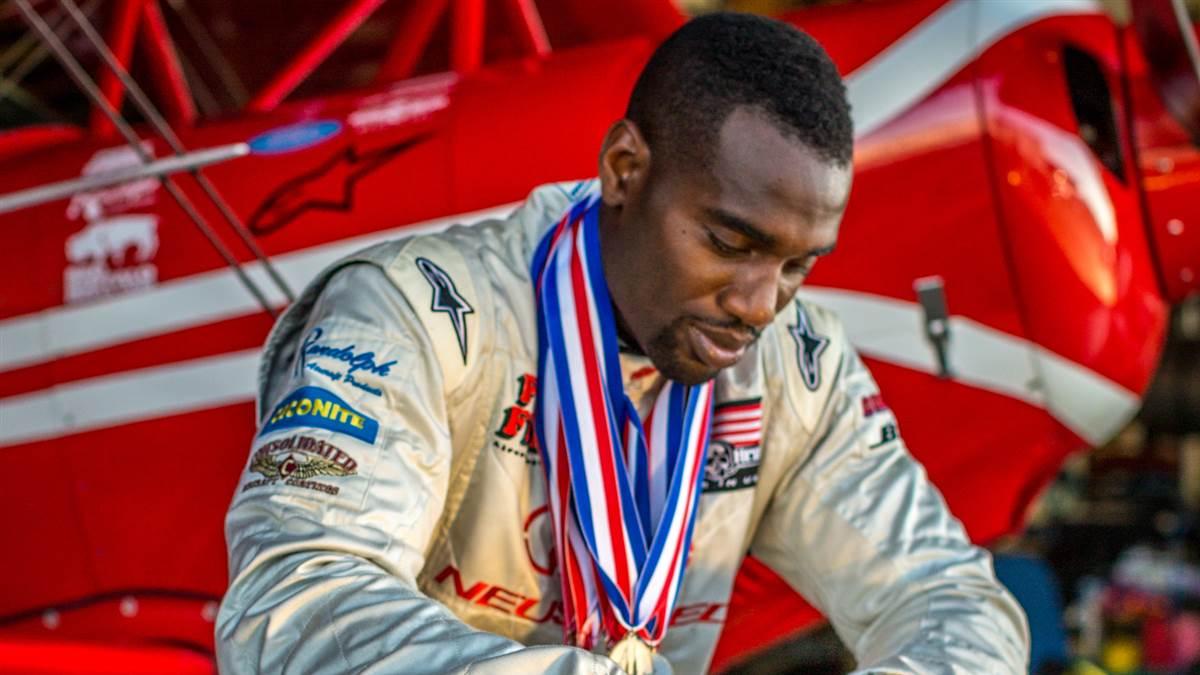 Who | Anthony Oshinuga, aspiring race/aerobatic pilot.
Hours | 1,500
Favorite aircraft | “Pitts Special S1—affordable, fun, and allows you to learn the fundamentals of aerobatic flying before jumping into a more capable and serious mount. Although I have to say the P–51 Mustang is my all-time favorite aircraft.”
Extra | “Every pilot has goals in aviation, whether it’s to fly to new and fun destinations, become a commercial pilot, or just excel as an aviator. I personally feel that anything you authentically apply your passion towards will bear fruit; you’ve just got to keep your eyes to the sky.”

Anthony Oshinuga has dreams. “Never give up. There will be naysayers. If you are passionate and consistent, doors will open. They have to,” he tells students at high schools in the region. Oshinuga follows his own advice, never giving up on his dream to fly on the aerobatic main stage. His quest for the gold, though, has taken its toll on the 34-year-old mechanical engineer. He’s chucked a couple of good jobs in the pharmaceutical world to pursue his flying dreams. The vineyard sightseeing flights in the 1949 Cessna 170A help cover some costs. His Pitts S1-S has been in the shop for months, getting work done on its wings; the time off killing his G tolerance.

Oshinuga is used to challenges: “I grew up poor.” He saved lunch money to buy paint for the radio-controlled airplane kit his dad bought him. “Nothing was ever given to me. I had to work for it,” he says. He was inspired by Top Gun at age 12, but his mother immediately shut him down when he declared he was going to be a fighter pilot. “She said, ‘I don’t want my son going out there and killing anybody and I don’t want my son getting killed.’ I was heartbroken.”

His Nigerian-born parents encouraged his education, though. A partial basketball scholarship was his ticket to a mechanical engineering degree and, ultimately, a job that allowed him to earn a private pilot certificate in 2010. A few aerobatic lessons and a glimpse of the Red Bull Air Races that same year further stirred his passion.

Since then Oshinuga purchased the Pitts and has competed three years at the U.S. National Aerobatic Championships and twice at the National Championship Air Races and Air Show in Reno, Nevada.

Developing his skills to compete at the highest level will take years, but he soldiers on, speaking to schoolkids, introducing others to flight through the EAA Young Eagles program, and improving the world’s dating scene through his book Hooking up with Mr. Right and Taking Flight. The book uses aviation analogies to help women attract the men of their dreams, says Oshinuga, who is married and the father of an infant son.

Meanwhile, he works to hone his aerobatic techniques, pharmaceutical consulting gigs help to pay the bills, and the goal of big-league aerobatic competitions is never far from his mind.