Get the app Get the app
Get the latest news on coronavirus impacts on general aviation, including what AOPA is doing to protect GA, event cancellations, advice for pilots to protect themselves, and more. Read More
Already a member? Please login below for an enhanced experience. Not a member? Join today
News & Videos Inexpensive Merlin aircraft making gains

Editor's note: This article was updated Aug. 1 with additional information.

Pilot Chip Erwin described progress on the Merlin personal sport aircraft (PSA) designed to lower the cost of flying. The single-seat Merlin cruises at 110 mph with higher wing loading and a higher power-to-weight ratio than a typical light sport aircraft, “and it’s $100,000 less expensive, so you’re paying a lot extra for a place to put your telephone.” The Merlin personal sport aircraft (PSA) is a single-seat aircraft that can be built for less than $40,000, said Chip Erwin. Photo courtesy of Aeromarine Merlin.

Erwin, who is recognized from his association with the Czech-built SportCruiser LSA adopted and then ditched by Piper, said, “LSA’s are ridiculously expensive.” He explained that the $16,500 high-wing Merlin kit concept began as a way to combat the rising cost of new aircraft in the LSA class and to simplify basic construction techniques. “We’re raising the bar for experimental aircraft,” Erwin explained July 26 at EAA AirVenture in Oshkosh, Wisconsin.

The Merlin kit has top skins and other parts that are basically pre-assembled in a Czech factory, leaving less work—and less room for error—during the final assembly stages. In a unique twist on a familiar phrase, he said “some disassembly is required” by builders who will be expected to layer in fuel, vacuum, and other systems. “The parts are already in,” he added, "but you have to take them off to comply with the 50-percent [homebuilt manufacturing] rule.”

There is a builder-assistance program for an additional $6,000, and Erwin said homebuilders “could have it finished with an A&P supervising them for about $38,000.” Avionics are additional, but he suggested that “for $38,000 to $45,000, you could have a really beautiful airplane” and “about a two-week build program. It’s a really, really a fascinating thing.” 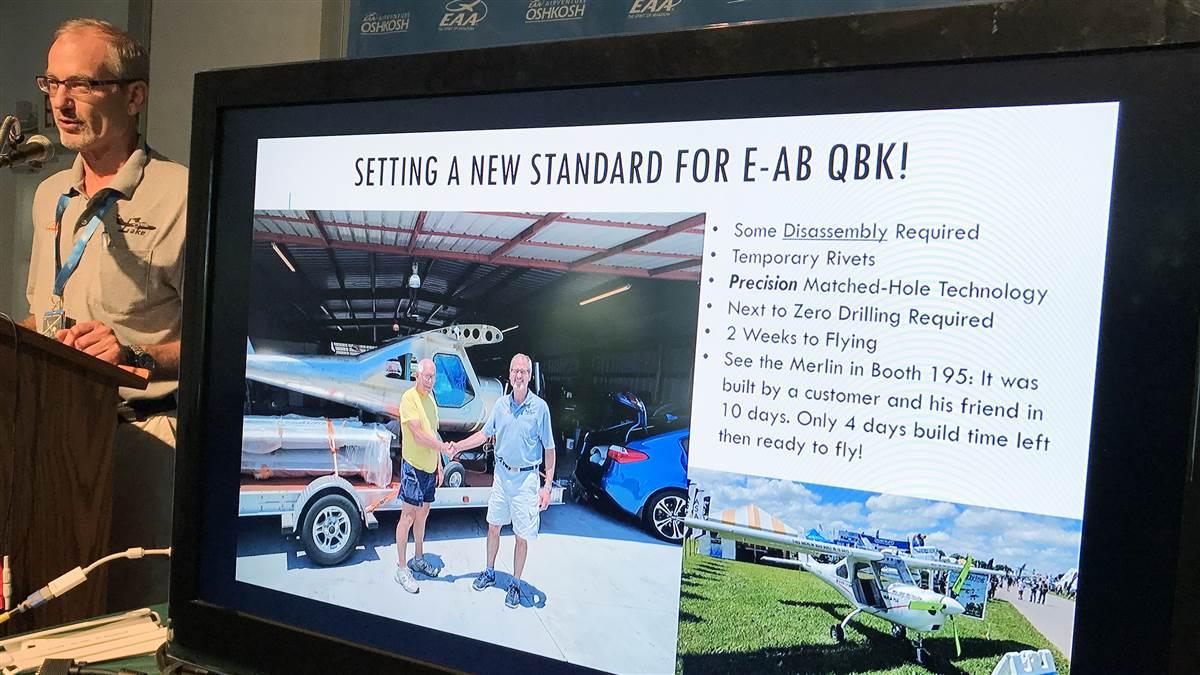 Six aircraft are flying in the United States and 44 have been shipped. The aircraft kit, which comes with a ballistic recovery parachute, has passed European standards as a microlight. Erwin described the Merlin as “fun” to fly because of its “three-second takeoff roll and exceptional performance.” He said that the center of gravity “is not an issue and big people fit in comfortably.” It has ample baggage space so owners can carry a lot of gear to their favorite airshow or secret getaway.