Get the app Get the app
Get the latest news on coronavirus impacts on general aviation, including what AOPA is doing to protect GA, event cancellations, advice for pilots to protect themselves, and more. Read More
Already a member? Please login below for an enhanced experience. Not a member? Join today
News & Videos “You’re on guaaarrrd!”

When professional pilots are anything but

Please. Just. Stop. Stop the buffoonery on 121.5 MHz, also known as “Guard.” The idiocy transmitted over what is reserved as the emergency frequency has spiraled down to a schoolyard maturity level. Perhaps I’m just getting old and crotchety, but I doubt that when I hear similar laments from my pilot colleagues. What’s most embarrassing is that the comments are largely coming from “professional” pilots hiding behind the anonymity of our VHF radios. The same tired, oft-repeated snarky comments every day, several times a flight; it’s the flight-level equivalent of the annoying Facebook friend who posts the same inane posts daily. 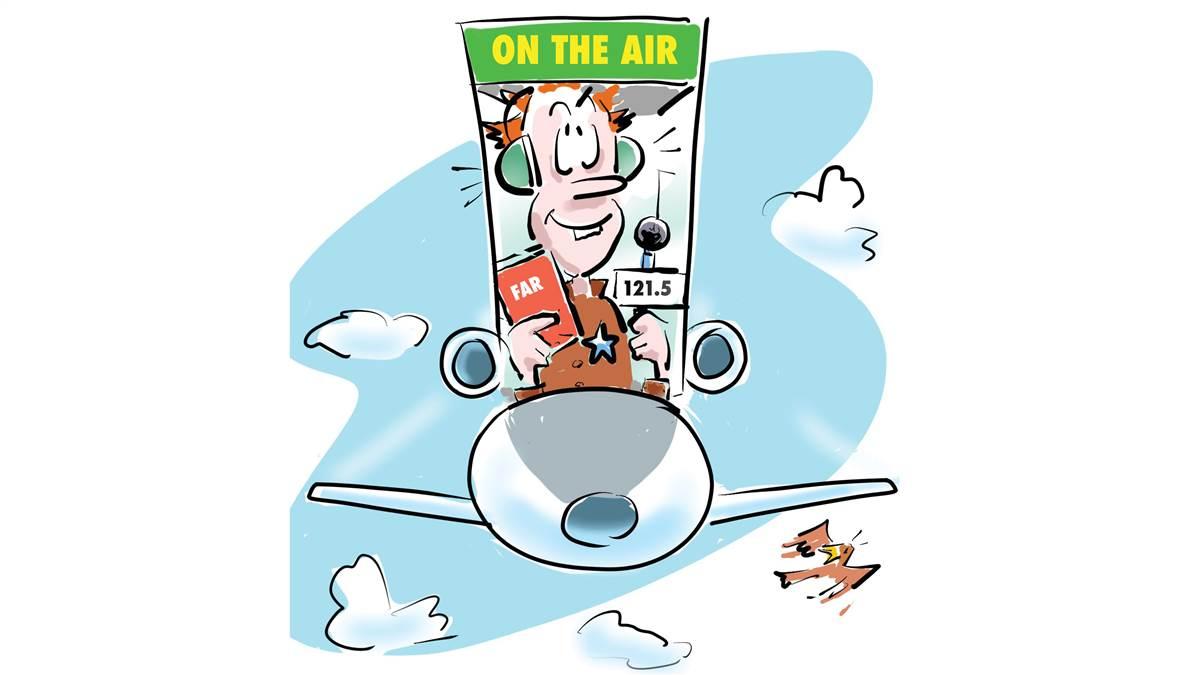 What prompted me to write this was perhaps the biggest breach of etiquette I overheard when someone mistakenly called for pushback clearance on 121.5 MHz, which is not uncommon. Another pilot answered, “Cleared to push.” I was incredulous. When fellow pilots sabotage other pilots’ careers—and their passengers’ safety—it clearly has gone too far.

A quick refresher from the Aeronautical Information Manual: All aircraft should maintain a listening watch on 121.5 MHz to the maximum extent possible. Unfortunately, with all the extraneous yakking on the frequency, this sometimes becomes impossible—which defeats the purpose. What is the frequency supposed to be used for? 121.5 MHz is a guarded frequency, hence the “Guard” comment you constantly hear. 121.5 MHz, and UHF 243.0 MHz for military operations, are monitored by ATC and others, including maritime agencies. There is a clear channel above and below both frequencies to eliminate the chance of bleed-over interference.

But this “guarded” frequency, which should remain quiet except for practical uses and actual emergencies, is monitored by a small group of “Guard Nazis,” one of many names for this type of pilot. You can just imagine them with their audio panels set to transmit on number two rather than their primary number one. Twitchy fingers or thumbs are poised over the push-to-talk button. They’re ready to be the first guy to chime in with the pirate-sounding “guuaaaard,” like we haven’t heard that a dozen times in the past 15 minutes. Perhaps the automation level in modern airliners has become too advanced if this is how pilots entertain themselves.

Woe to the pilot who mistakenly transmits on 121.5 MHz. The assault from the Guard Goons is swift and stinging.But what are the benefits of monitoring 121.5? Restoring lost communications is a big one. If you flub a handoff or ATC forgets to hand you off, and you fly out of range, you can be reached on 121.5 and told to come up on a new frequency. My recreational flying occurs in and around Washington, D.C., where I often hear warnings broadcast to aircraft approaching restricted airspace. A last-ditch chance to avoid an airspace bust or an intercept? Yeah, I’ll take that benefit.

If your primary ATC frequency has a stuck microphone blocking all transmissions, a heads-up call on 121.5 can alert fellow pilots to check their mics on the frequency in question. If that doesn’t work, ATC can at least get you another frequency to try. Finally, radio relays on 121.5 can restore communications between distant controllers and aircraft below their radio coverage.

But woe to the pilot who mistakenly transmits on 121.5 MHz. From long cabin PA announcements to the quick but errant call to ramp or operations, the assault from the Guard Goons is swift and stinging. Because, of course, they’ve never mistakenly transmitted on 121.5. Rather than stay quiet and let the offender figure it out, the Guard Police must immediately chime in, ultimately stepping all over each others’ transmissions in the process. Gee, I wonder how many knee-slapping comments I missed in that squeal of multiple Guardians trying to get their word in? If the offender calls two or three times, then a simple “check frequency” would be justified. That’s it.

The proliferation of smartphones has armed the Guard Geeks with ever more material to test on their audience. Now, they have their favorite ringtones, music, and movie quotes to share. And then there’s the bodily noises. Really? Am I back in fourth grade?

Of course, the shenanigans simply make the true professionals turn off or tune out. When the unwitty chatter gets going, they turn off the distracting audio only to realize, say an hour later, that it’s still off. I hope they didn’t miss any legitimate calls thanks to the boy-who-cried-wolf mentality that exists on 121.5.

Speaking of boys, I have to hand it to female pilots, because in my 32 years and 14,000 hours of flying, I’ve never heard stupid comments on 121.5 spoken in a (real) female voice. I say “real” because there are lots of mistaken calls to company operations frequencies answered by males, imitating a female voice—quite poorly, I should add. We’ve heard this one thousands of times before, and it’s still not funny. I realize that women account for only about 6 percent of the pilot population, but even with those odds, I find it refreshing that the women realize the stupidity of it all, and wisely stay out of it. They likely recall their days in grade school when the Guard boys start chiming in.

So can we all dissuade ourselves from making the emergency frequency the social network of the airwaves? Can we stop polluting the airwaves with worn-out gags, ringtones, and belches? It has become the airborne equivalent of middle schoolers putting firecrackers in the toilet. I’m sure if the general public heard what was being said by our “professional” pilots on a so-called “emergency frequency,” the fallout would be embarrassing to the profession. AOPA