Get the app Get the app
Get the latest news on coronavirus impacts on general aviation, including what AOPA is doing to protect GA, event cancellations, advice for pilots to protect themselves, and more. Read More
Already a member? Please login below for an enhanced experience. Not a member? Join today
News & Media Training Tip: Unusual aerial activity
Sponsored by Aircraft Spruce

A pilot studying airspace on a sectional chart before a cross-country flight notices an oddly shaped block of special-use airspace of considerable size, identified with the letter A followed by a number. 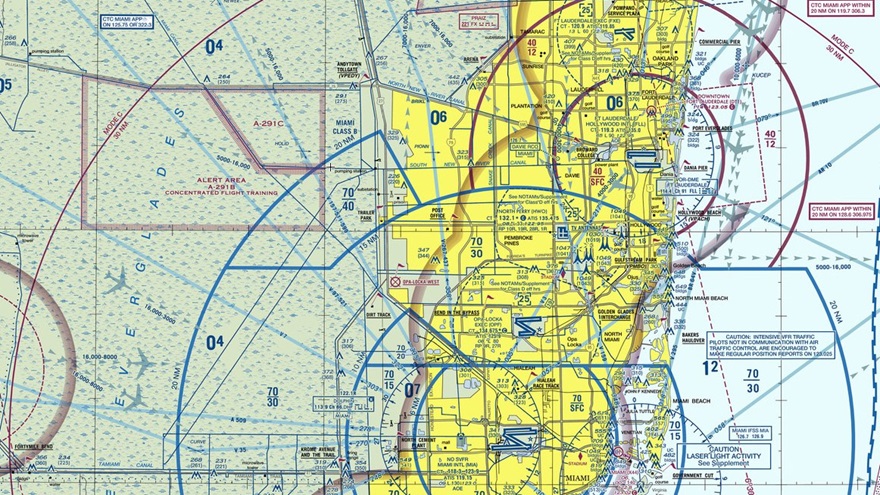 Special use area A-291 to the northwest of Miami's Class B airspace. Graphic courtesty of SkyVector.

This isn’t a prohibited area, a restricted area, or a military operations area—all of which the pilot has seen before and knows what the designations require of those flying in the vicinity. This airspace is an alert area, and in this example, the designation Alert Area A-291 B is accompanied by a note: “concentrated flight training.”

Before hitting the books to review alert areas, the pilot notes several other charted characteristics of A-291 B, located just northwest of Miami’s Class B airspace. Several Victor airways enter the airspace at its southeast corner, with one of the routes (accommodating V97 and 521) exiting at its northern boundary, and the other, representing airways V157-511-599, continuing into an adjoining alert area designated A-291 C. Also, the southeastern tip of A-291 B extends into a segment of the Miami Class B airspace that has a floor at 4,000 feet msl and a ceiling at 7,000 feet.

How do alert areas fit into the overall airspace structure, and what responsibilities does a pilot take on when transiting them on a cross-country flight or as a “nonparticipating” flight?

The Aeronautical Information Manual explains that special-use airspace (SUA) is divided into two categories: regulatory SUA, such as prohibited areas and restricted areas that are “established in 14 CFR Part 73 through the rulemaking process,” and nonregulatory SUA including warning areas, military operations areas, alert areas, and controlled firing areas.

“Alert areas are depicted on aeronautical charts with an ‘A’ followed by a number (e.g., A-211) to inform nonparticipating pilots of areas that may contain a high volume of pilot training or an unusual type of aerial activity. Pilots should exercise caution in alert areas. All activity within an alert area shall be conducted in accordance with regulations, without waiver, and pilots of participating aircraft, as well as pilots transiting the area, shall be equally responsible for collision avoidance,” notes the Pilot's Handbook of Aeronautical Knowledge.

Information about the alert areas on the Miami Sectional Chart is included on an informational panel of the chart, and gives the altitudes of use, time of use, and controlling agencies. Check notices to airmen frequently when a flight may take you in or near special-use airspace.