Outside the Box: The Rotax 912 is delightfully different

The past 20 years may have yielded more outside-the-box ideas than any other comparable period in history. The iPod redefined the music industry in 2001. Facebook, YouTube, and Twitter redefined how we interact. The iPhone not only redefined the cellphone, but also changed our lives in too many ways to count. Airbnb redefined lodging, Uber redefined ground transportation, and the iPad and ForeFlight redefined our general aviation cockpits. (Remember when we schlepped around 15 pounds of Jeppesen binders, and spent mind-numbing hours keeping them updated?) Wow! 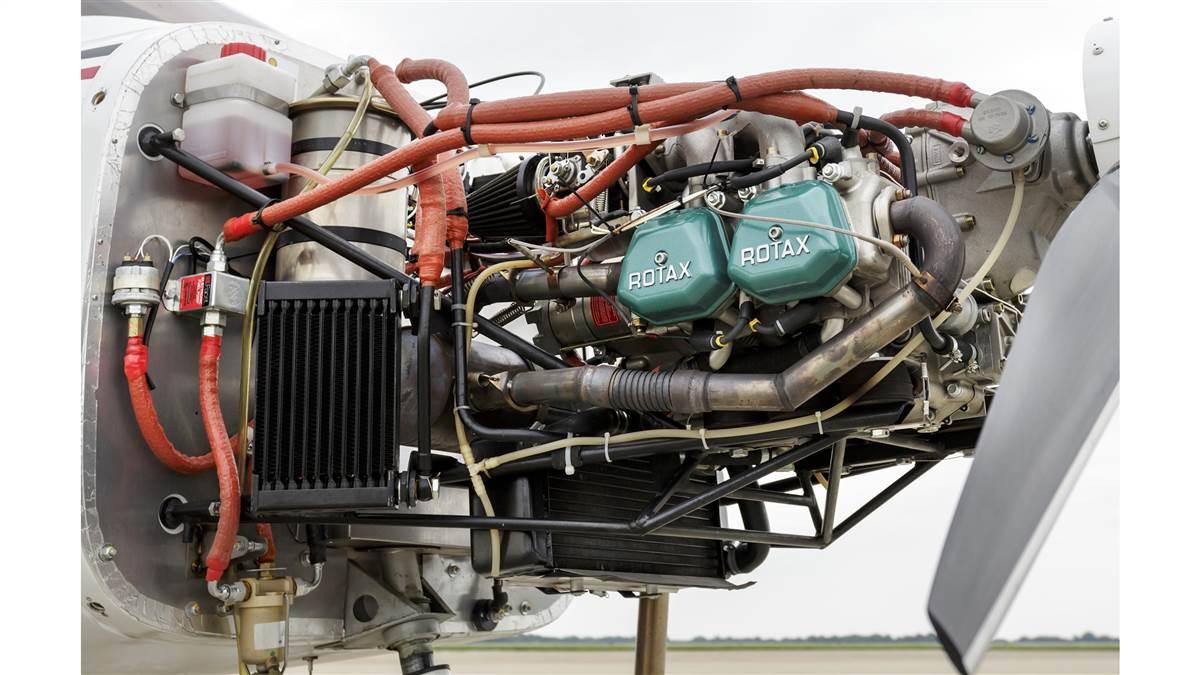 A different way of doing things

Preflight of a Rotax is straightforward, but with a few twists.

I’ve already discussed burping the engine before checking the dipstick and, if necessary, adding oil. It’s also important to check the coolant level; the main coolant tank should be full, and there always should be some extra coolant in the overflow tank. The preflight visual inspection should include looking for coolant leaks.

Starting is a bit different. The carbureted 912s have a choke but no primer. Cold starts are accomplished by pulling the throttle back to idle, activating the choke fully, turning on the electric auxiliary fuel pump, and cranking the engine (10 seconds maximum). Once the engine starts, retard the choke slowly and simultaneously advance the throttle to maintain an idle speed of about 2,000 rpm—remember, that’s crankshaft speed, not prop speed.

After the engine warms up for a minute or two, advance the throttle to 2,500 rpm and make sure the oil temperature is coming up. When oil temperature reaches about 120 degrees Fahrenheit (50 degrees Celsius), it’s okay to taxi to the runup area. The mag—oops, ignition—check is done at 4,000 rpm with a maximum drop of 300 rpm and no more than 120 rpm difference between the two ignition circuits. After the runup, throttle back to idle (around 2,000 rpm).

After landing, allow the engine to cool down at idle rpm for a bit before shutting down (with the ignition switch; there’s no mixture control). This keeps the coolant circulating and helps prevent any boiling that might occur if the engine stopped with hot cylinder heads. Using waterless coolant eliminates the issue. —MB

While all this amazing innovation was happening, a Canadian company’s obscure Austrian subsidiary—mostly known for its two-stroke snowmobile, motorbike, and ATV engines—was quietly redefining the small (under 150 horsepower), four-stroke piston aircraft engine. Few U.S. aviators noticed until 2004, when the FAA approved the Light Sport aircraft rule, and sexy factory-built special Light Sport aircraft (S-LSA) began entering the U.S. aircraft registry and showing up at the airshows in Oshkosh, Lakeland, and Sebring.

Nearly all those S-LSAs turned out to have same engine: the Rotax 912. Today, as the LSA rule celebrates its thirteenth birthday, nearly every pilot has heard of Rotax. Yet the outside-the-box nature of its innovative engines remains widely underappreciated outside the Light Sport and Experimental communities.

The Rotax 912 story began in 1989, when the first 80-horsepower engines were shipped to customers in Europe for use on ultralights and motorgliders. Rotax already dominated those markets with two-stroke engines derived from the company’s snowmobile product line. But almost nobody outside the ultralight community took notice.

For one thing, Rotax had developed a reputation for building cheap, light, cantankerous, not-very-reliable engines with ridiculously short 300-hour TBOs. For another, the new 912 four-stroke engine had a TBO of only 600 hours—perhaps an improvement by ultralight standards, but hardly acceptable in the world of “real airplanes.”

Rotax pressed forward. By 1994, Rotax obtained FAA certification of the 80-horsepower 912, and in 1996, it introduced a turbocharged version (the 914) rated at 115 horsepower. In 1999, a normally aspirated 100-horsepower version for ultralights (912 ULS) was introduced, and an FAA-certified version (912 S) quickly followed. By then, the TBO had been increased to 1,200 hours for the 912 and 1,000 hours for the 914. The engines were selling well abroad, but never gained much traction in the United States.

Everything changed in 2004 and 2005 when the FAA adopted the LSA rule. Factory-built S-LSAs suddenly became all the rage, and the overwhelming majority of them were powered by the Rotax 912 ULS. LSA designers considered it the obvious choice: It was substantially lighter, more compact, and more efficient than traditional 100-horsepower engines (such as the Lycoming O-235 and Continental O-200); was designed to run on unleaded mogas; and by then had a credible 1,500-hour TBO. What wasn’t to like?

If you grew up in a world of Continentals and Lycomings like I did, these four-stroke Rotaxes take some getting used to. They’re different—in a good way. If Rotax made a 300-horsepower version I could hang on my Cessna T310 in place of its Jurassic Continental TSIO-520s that were designed more than a half-century ago, I’d do so in a heartbeat.

First, the engine is astonishingly small and light. The 912 ULS has a dry weight of just 132 pounds, compared to 199 pounds for a Continental O-200-D or 200 pounds for a Lycoming IO-233-LSA. (All three of these engines are rated at 100 horsepower.) Rotax accomplishes this mainly by turning the engine twice as fast: Redline is 5,800 rpm for takeoff and typically 5,000 rpm in cruise. The cylinders can have a lot less displacement because they process twice as many combustion events.

Of course, you can’t turn a prop that fast without the prop tips going supersonic (and generating a lot more noise than thrust), so the engine has a reduction gearbox with a 2.43-to-1 ratio. At redline, the prop turns at less than 2,400 rpm; in cruise, the prop turns just over 2,000 rpm. The notion of a geared engine might sound scary, but the Rotax gearboxes have been trouble-free and require no special maintenance other than a 1,000-hour recommended inspection.

If you grew up in a world of Continentals and Lycomings like I did, these four-stroke Rotaxes take some getting used to. They’re different—in a good way.Obtaining 100 horsepower from such tiny cylinders at such high rpm creates a cooling challenge. Rotax deals with this elegantly by combining conventional air cooling of the finned cylinder barrels with liquid cooling of the cylinder heads. The engine incorporates a small integral coolant pump and a small external radiator. Coolant volume is only about a half-gallon, so it doesn’t add much weight. Liquid cooling of the heads results in far lower CHTs—typically less than 200 degrees Fahrenheit in cruise, with a redline of 275 degrees F.

The ignition system is electronic, powered by dual alternators that are built into the engine. A powerful permanent magnet on the flywheel induces AC current into a pair of stator coils inside the crankcase. The AC is fed to an electronic rectifier/regulator unit that puts out 13.8 volts DC. These dual alternators power the dual solid-state ignition system. They also drive the electronic tachometer (which displays crankshaft speed, not propeller speed).

The oil system is a bit different, too. Instead of using a wet sump system, with a large oil pan on the bottom of the crankcase like all Lycomings and most Continentals, the Rotax uses a dry sump system employing an external cylindrical oil tank. Instead of relying on a scavenge pump to return oil to the tank—or on gravity like the O-200 does, requiring the oil tank to be below the crankcase—Rotax uses internal crankcase pressure (caused by blow-by of combustion gases) to propel the oil from the bottom of the crankcase to the oil tank.

This demands a novel preflight procedure: Before checking the dipstick to determine the oil level, it is necessary to “burp” the engine by removing the oil filler cap and then pulling the prop through by a few blades until you hear a gurgling sound—which indicates that all the oil from the bottom of the crankcase has been pushed into the oil tank, and only air is left in the crankcase. Once the engine has been burped, you can obtain an accurate dipstick reading and you’re assured of a full oil tank at engine start.

Rotax engines have no mixture control knob. Most carbureted ones like the 912 ULS incorporate dual Bing carburetors with a high-altitude compensator that automatically adjusts the fuel/air mixture by sensing pressure altitude. Injected engines such as the 912 iS incorporate a FADEC that accomplishes the same thing.

Perhaps the most delightful difference is that the Rotax is designed to use unleaded autogas, which is significantly cheaper and cleaner than avgas. Using 100LL is permissible but not recommended. In fact, if the engine is run on 100LL more than 30 percent of the time, Rotax calls for a reduced oil and filter change interval, and increased preventive maintenance. The use of leaded avgas can cause buildup of lead sludge in the oil tank and reduction gearbox, among other bad things. Also, you’re not allowed to use all-synthetic oil such as Mobil 1 if you use leaded avgas, because synthetic oil can’t hold lead in suspension. Bottom line: Try to use unleaded mogas instead of leaded avgas if you possibly can.

Lockwood Aviation in Sebring, Florida, is the preeminent provider of Rotax parts, overhaul, and maintenance training in the United States. I had a long chat with Rotax guru Phil Lockwood about the reliability and durability of these engines. Lockwood told me that when Rotax 912s come into his shop for overhaul after 2,000 hours and he tears them apart, it’s astonishing how pristine they are inside. After 28 years of incremental evolution, product improvement, and TBO extension, these engines seem to be about as bulletproof as anything in aviation.

Now if they’d only build a 300-horsepower model….