George Bye, creator of the Sun Flyer electric trainer prototype, has teamed up with XTI Aircraft Company to accelerate development of a vertical takeoff and landing design that aims to seat six and cruise at business jet speed. 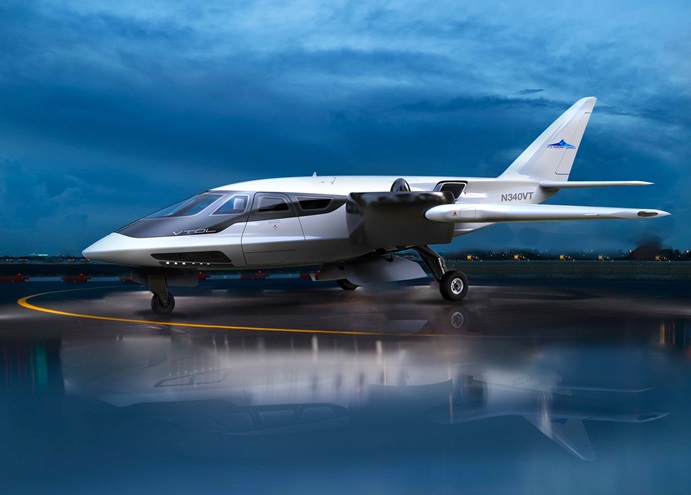 XTI Aircraft Company is collaborating with Bye Aerospace to build a hybrid-electric prototype of the TriFan 600 design. Image courtesy of XTI Aircraft Co.

XTI Aircraft announced the partnership March 6, noting that the addition of Bye and his design team to the effort will accelerate development and allow the first prototype to be built at full scale, rather than the 65 percent scale previously planned. The TriFan 600 also will now have a hybrid-electric propulsion system.

XTI is recruiting investors through traditional venture capital channels as well as through online crowdfunding. The TriFan 600 being developed will be able to take off and land vertically, then transition to more airplane-like flight as the ducted fans rotate, giving it an expected range of 1,200 miles. XTI expects the TriFan 600 to be able to climb to 35,000 feet in ten minutes.

“Advanced electric power for aircraft makes the hybrid-electric configuration compelling for the TriFan,” said George Bye, founder, chairman, and CEO of Bye Aerospace, in the XTI news release. “We can now bring together into one extraordinary airplane, battery power, electric motors, and a light efficient engine in a vertical takeoff and landing platform. The TriFan will achieve unprecedented performance and operating economy while being safer, lighter, quieter and cleaner. We’re very excited to team with XTI on this game-changing VTOL project.”

Bye’s own Sun Flyer, a two-seat, solar-electric trainer, aims to be the first American-made, practical, and all-electric trainer to reach the market. A maiden flight has not been announced, but ground testing began in 2016.