Get the app Get the app
Already a member? Please login below for an enhanced experience. Not a member? Join today
We are currently experiencing issues with our phone system. We apologize for the inconvenience.
News & Videos After sundown

Don’t be afraid of the dark. Night flying can provide rewarding experiences in your flying life.

Of all the skills you learn as a student pilot, night flying ranks high in importance. That’s because when the sun goes down, a new set of adaptations, challenges, and rules kicks in. Even if you don’t plan to fly at night, there may come a short winter day that leaves you flying unexpectedly late. And there you are, flying in the dark and facing a new world. 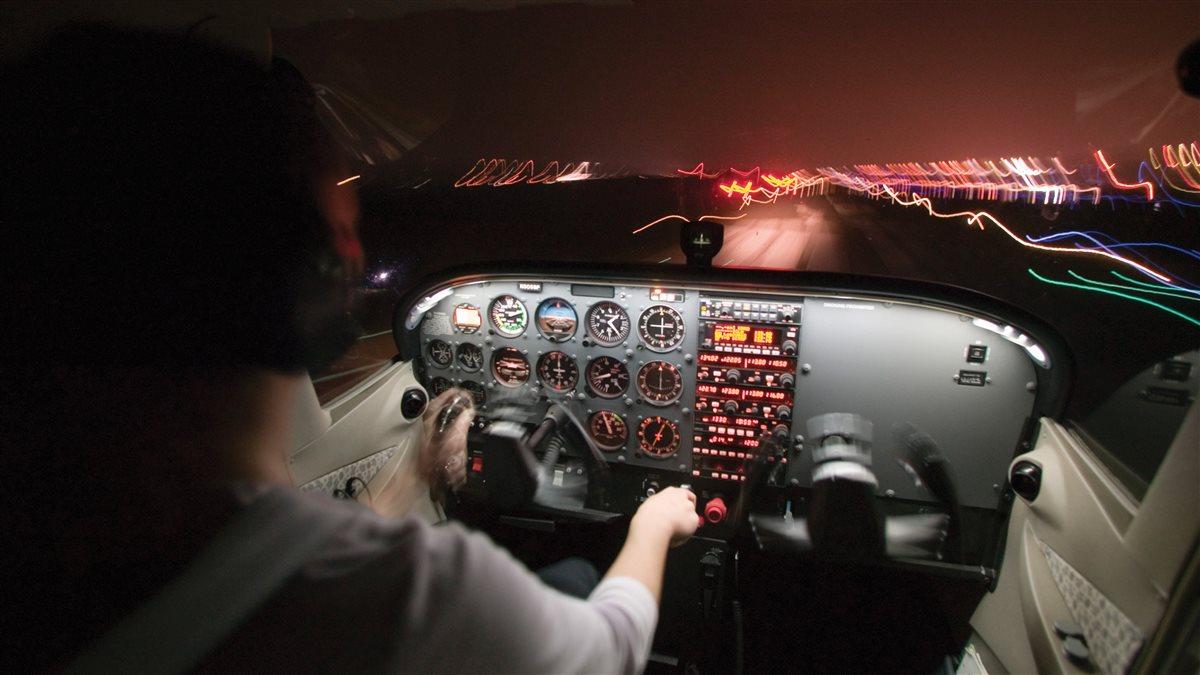 Don’t leave home without one (or more)

If, like most of us, you fly under FAR Part 91 flight rules, then you are not required to carry a flashlight at night. But how will you conduct your preflight in the dark? What will you use as a light source if your airplane’s panel goes dark?

Some pilots believe they must have a flashlight powered by two D cells, but that rule applies to FAR Part 135 operators carrying passengers under VFR at night or under VFR over-the-top conditions (see FAR 135.159[f][3]).

So, what flashlight should you carry? It’s up to you. Here are some popular choices. 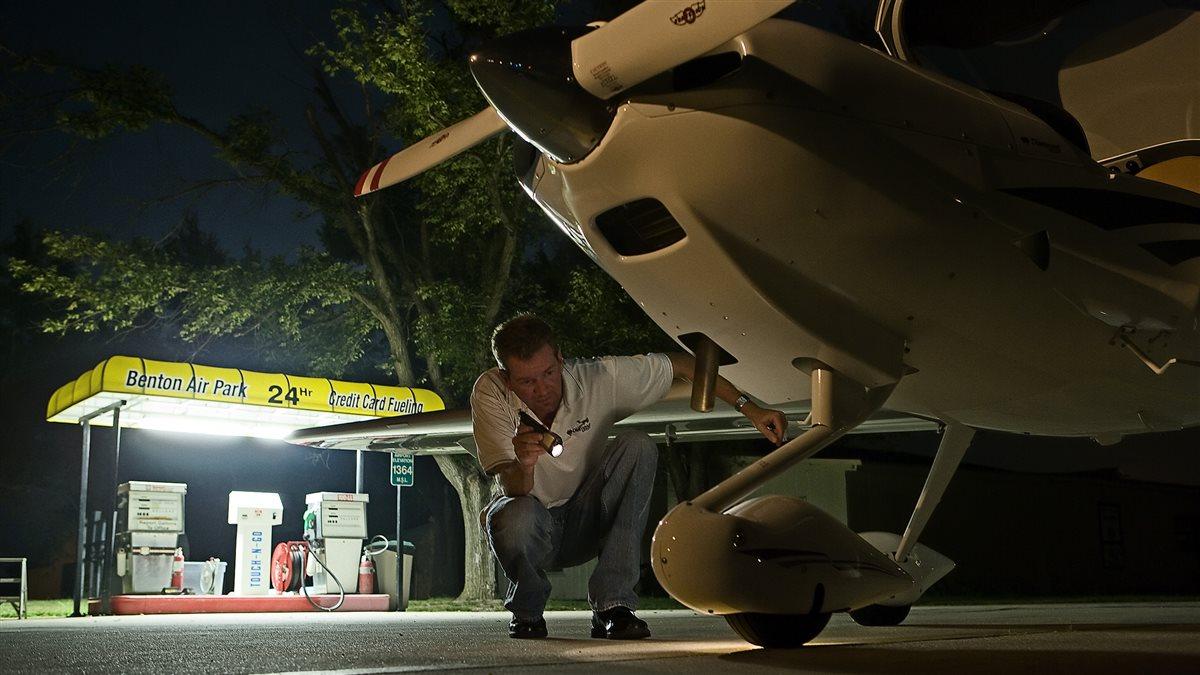 That’s just one scenario when you’ll be glad you complied with the night flying instruction requirements set out in FAR 61.109 (three hours of night flight training, including a cross-country flight of more than 100 nautical miles total distance, and 10 takeoffs and landings to a full stop).

reparing for a night flight means coming to terms with many important preflight items—among them, lights. Your flight instructor should make sure you understand aircraft, airport, runway, taxiway, and approach light systems—including visual approach slope indicators (VASIs), which are valuable in setting up a safe descent profile on final approach. In a void of darkness, lights assume central importance.

That includes flashlights. Although the regulations don’t require them for operations under FAR Part 91, you should have one, or more, on hand. With plenty of spare batteries. How else can you determine your fuel level, or otherwise perform a safe preflight inspection of the airplane? Or be aware, say, of that set of chocks someone left on the taxiway? Or look on the floor for the pen you just dropped?

Knowing runway and taxiway markings is always important, but never more so than at night. Unless you have the luxury of a navigation display with your position georeferenced on an airport diagram, taxiway lights and lighted signs are the only ways to help you safely get to the active runway. Sure, you can use paper charts—they’ve served well for decades—but seeing them in the dark can be a tough job. Your instrument lights work, don’t they? Sure they do; you checked that during the preflight.

Night takeoffs are a rush. As the airplane accelerates down the runway, you probably will have the sensation of going faster than normal. Our eyes see closer objects better than distant ones, so as the nearest runway lights pass by, our eyes fool our brains into thinking we’re going faster than we really are.

After takeoff, other sensations and illusions take over. With no visual references to help, it’s time to focus on the flight instruments for positional cues. For all practical purposes, this amounts to instrument flying. It’s of vital importance that your instrument scan be both fast and efficient—try not to fixate on any one instrument. This helps prepare you for training for the instrument rating, and could save your life if you inadvertently enter clouds or limited-visibility conditions (see “Gray Out,” p. 50).

That’s just one scenario when you’ll be glad you complied with the night flying instruction requirements set out in FAR  61.109 (three hours of night flight training, including a cross-country flight of more than 100 nautical miles total distance, and 10 takeoffs and landings to a full stop).

Watch for the so-called “black hole” after-takeoff illusion when taking off into a pitch-black, featureless scene. After climbing away from the runway and airport lights there’s no horizon, no ground lights, no stars, and no moon. Pilots taking off from remote or desert airports, or those near large bodies of water, often run into the black-hole phenomenon. The antidote is to fly by reference to your instruments, and trust their indications. Otherwise, your senses can trick you into a case of vertigo. Keep the wings level, hold the heading, and maintain a climb—all the while taking into consideration any nearby terrain.

After some experience, most pilots realize that night flying has some definite advantages. You can see other traffic, thanks to their position lights and strobes. Without a sun to heat the Earth’s surface, thermals cease and often, a night flight can be turbulence-free and smooth as glass. Fly often enough, and you learn to recognize cities and towns just by seeing the shapes of their lighting arrays, and to detect and identify nearby airport beacons. This does wonders for your confidence. 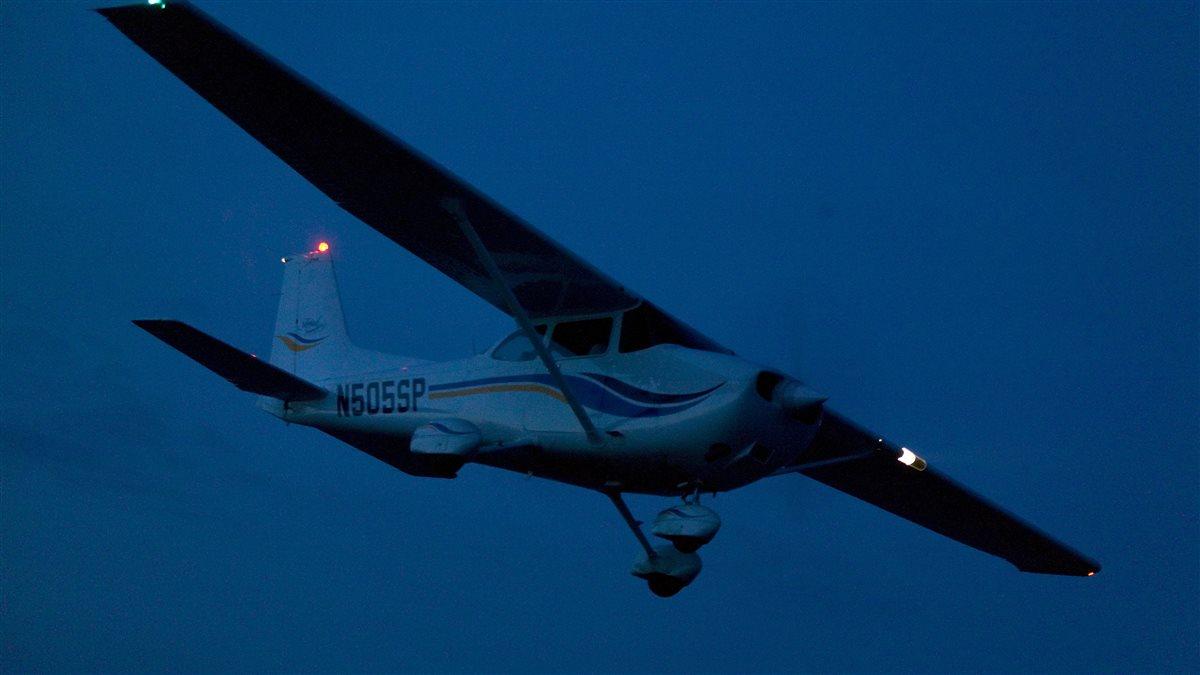 Then there’s the weather. Unless there’s a moon, you can’t see clouds at night, so hopefully your preflight weather briefing and in-flight weather information sources assure you of the ability to maintain VFR cloud-separation distances. If there’s any doubt, call off the flight, wait it out, and maybe begin studying for that instrument rating.

Have you entered a cloud? Turning on your landing light can confirm that. If so, a climb, descent, or 180-degree turn will hopefully put you back in good VFR conditions in short order.

As nighttime temperatures drop, the temperature/dew point spread narrows. That can mean fog if the spread goes to five degrees or less—especially near rivers and lakes, or after a front has brought a soaking rainfall. From the cockpit, you can watch for the early signs of a dense fog by looking at lights on the ground. If they’re beginning to be surrounded by fog, get ready to land at the nearest suitable airport. If you keep track of METARs as you fly, you’ll have advance warning of any fog or other adverse conditions.

Night airport traffic patterns should be flown just like those you fly in the daytime. But after turning final, illusions can crop up once more if you fly into black-hole conditions or encounter other situations. A runway that slopes away from its threshold can fool you into thinking you’re too low on final. Conversely, a runway that slopes up can leave you thinking you’re too high. Either way, there’s a temptation to adjust your glidepath too high or low, as the case may be, and ruin a stable approach in the process.

Here’s where visual approach slope indicators can come to the rescue. Check your chart supplement to see if VASIs or other approach slope indicators are available at the airports you’ll be flying to. VASIs are located to the side(s) of a runway’s threshold, and come in two- and three-bar setups (the three-bar version is for jumbo jets). If the far bar is red, and the nearer one white, you’re on glidepath—hence the “red over white, you’re all right” memory aid. White over white lights? Sorry, you’re too high, or, as the saying goes, “white over white, fly all night.” Red over red? Uh oh, you’re too low—“red over red, you’re dead”—and should climb until you have a red-over-white picture. Better yet, if you see red over red, go around immediately.

What’s the most attractive aspect of night flying? The paucity of visual cues means you concentrate on the few you can see. This develops your curiosity, enhances situational awareness, and turns your thoughts inward.Precision approach path indicators (PAPIs) are like VASIs, but their four lights are arranged in a row. You want two lights red, two lights white to stay on a proper glidepath. If all four lights are red, well, you already know what to do by now.

No VASIs or PAPIs or even lighted “poor man’s VASIs” (three white boards lined up in a row; you want them lined up to stay on glidepath)? Use the shape of the runway lights to help determine the correct sight picture. You’ve seen that before, on daytime flights. With a little practice you can adjust your altitude to make the runway lights conform to the right perspective. Shorter or longer runways can make this a challenge, but again, practice makes perfect. 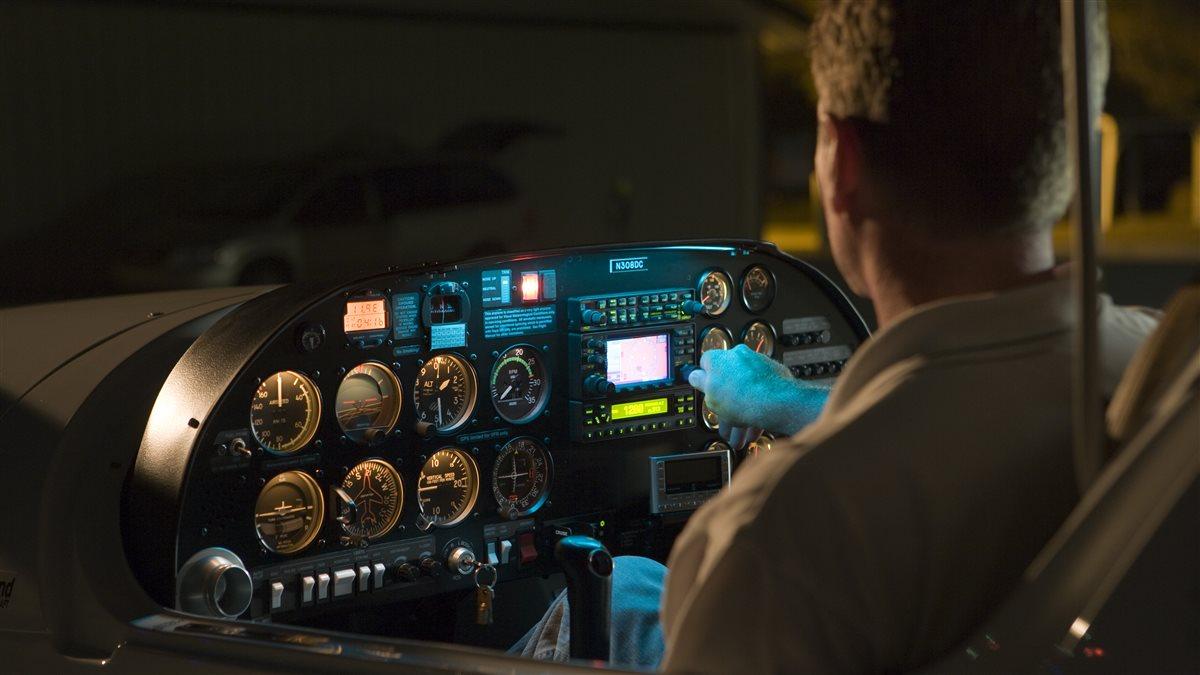 What’s the most attractive aspect of night flying? The paucity of visual cues means you concentrate on the few you can see. This develops your curiosity, enhances situational awareness, and turns your thoughts inward. Some of my most memorable, enjoyable flights have been long night cross-countries. One summer night I dropped off a friend at the Ann Arbor, Michigan, airport, then took off, bound for Gaithersburg, Maryland’s Montgomery County Airpark.

A weak cold front had gone through western Pennsylvania, leaving isolated, dissipating thunderstorms. Other than that, skies were severe clear, I had a sliver of moonlight, and I cruised at 7,500 feet in cool, turbulence-free air. The lights of Detroit slid by my left side, then came the dark void of Lake Erie and a sprinkling of ships’ lights, followed by Cleveland, with its blaze of illumination abruptly halted by the lakeshore. The traffic was light, and the frequency was so quiet that the controllers running Cleveland’s airspace let me fly directly over Hopkins International—all lit up with its array of airport lights.

To the south came Akron’s lights, then dark terrain interspersed with the green-and-white beacons of airports in eastern Ohio. On I went, past Pittsburgh and into the Appalachian darkness. Headlights snaked down interstates.

Then came the thunderstorms. They were small, spread far apart, and their tops were just above my altitude. I wove around them, still in clear, turbulence-free air. The storms were clearly dying, but they were still generating lightning. As I flew by, the cells lit up in the dark—first one, then another. It was a light show all my own. And then I was through, back in the night, back in clear air, on my way to Gaithersburg. I’ll never forget it. 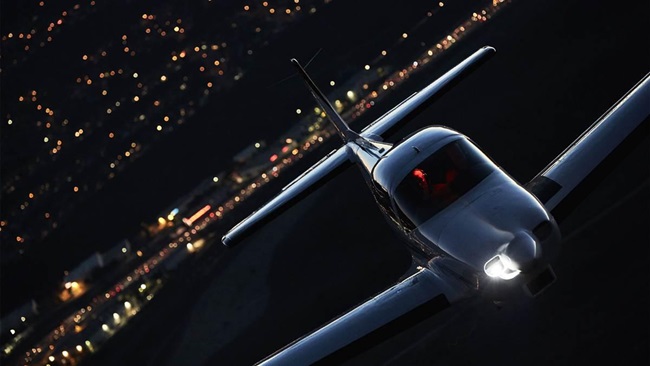 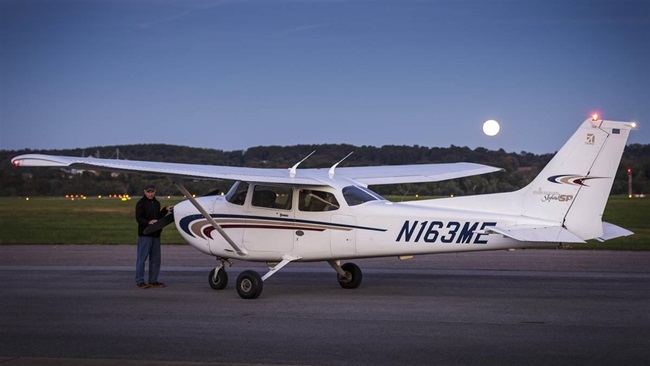 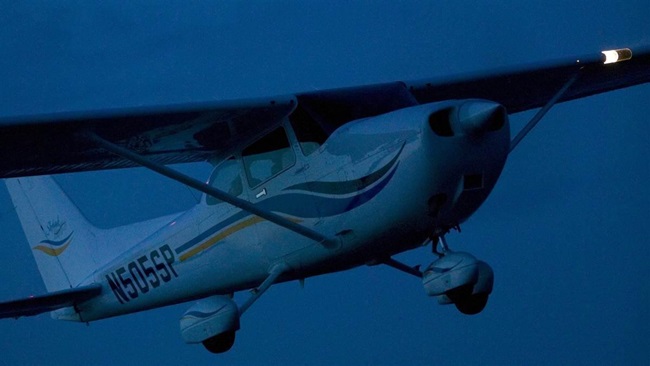