Get the app Get the app
AOPA Members DO more LEARN more SAVE more - Get MORE out of being a pilot - CLICK HERE
News & Media North Carolina: Outbound to Ocracoke

This barrier island is flightworthy—even in the off season

It’s a beautiful October morning and Conor Dancy and his wife, Sam, are flying the coast of North Carolina.

The slender strip of land that comprises the state’s famed Outer Banks and the Cape Hatteras National Seashore is below. In the high season of tourists and sunbathers and fishermen, this coastline would be filled with families, SUVs, and fishing poles. Today it’s just the hum of the Cessna Skylane’s engine. For the 25-year-old Dancys (they were high school sweethearts), this is a getaway the hardworking young couple could not imagine in the heat and high prices of July. They are bound for the farthest tip of these Outer Banks, to a barrier island accessible only by water or air.

Conor and Sam’s three-day vacation takes advantage of reduced rates and few tourists in the off-season. Conor is a corporate pilot who, while on the road quite a bit, rarely gets to enjoy flying just for fun. Sam is a human resources professional who also works long hours. They’ve rented a Skylane from Conor’s former employer, a flight school in Leesburg, Virginia. 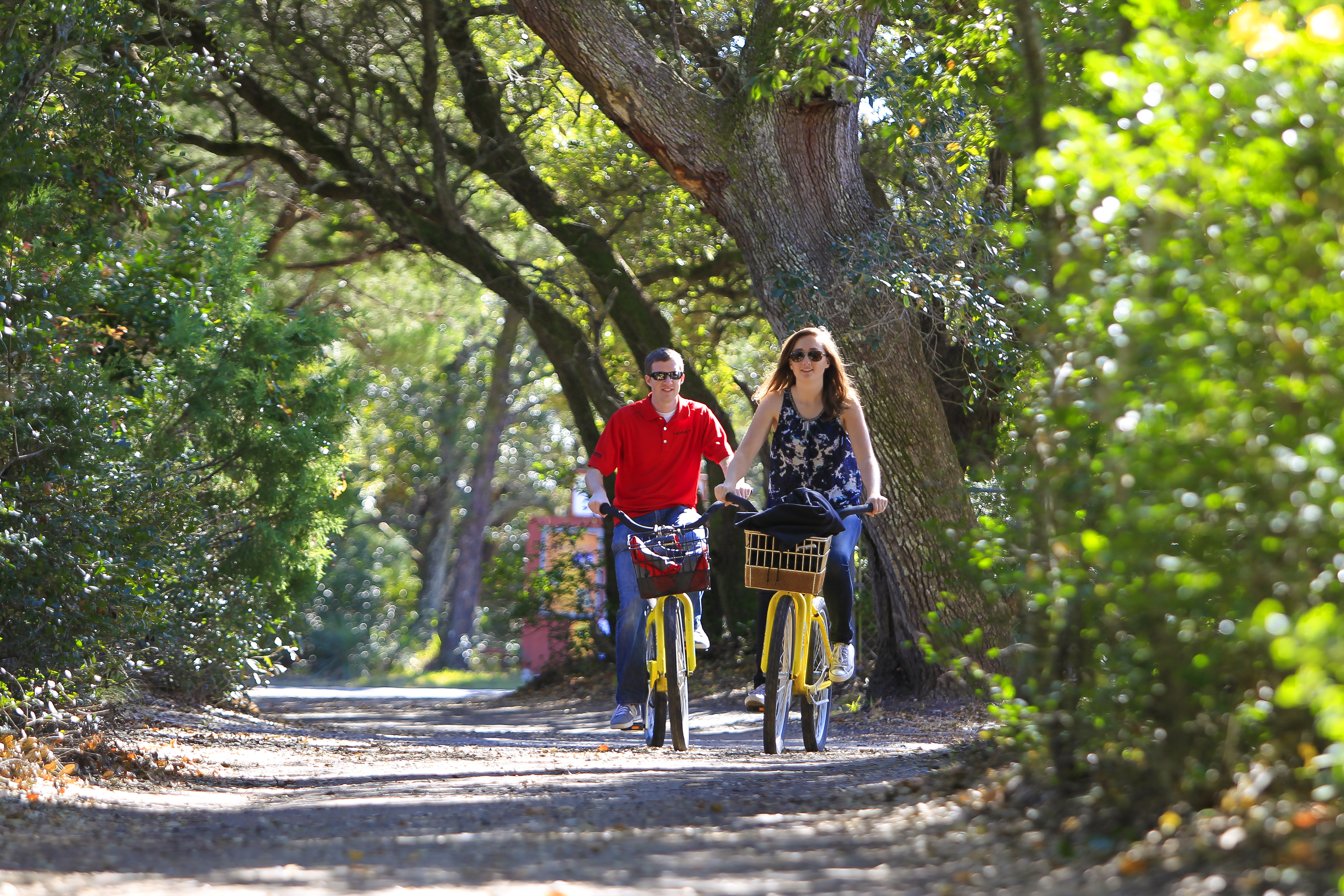 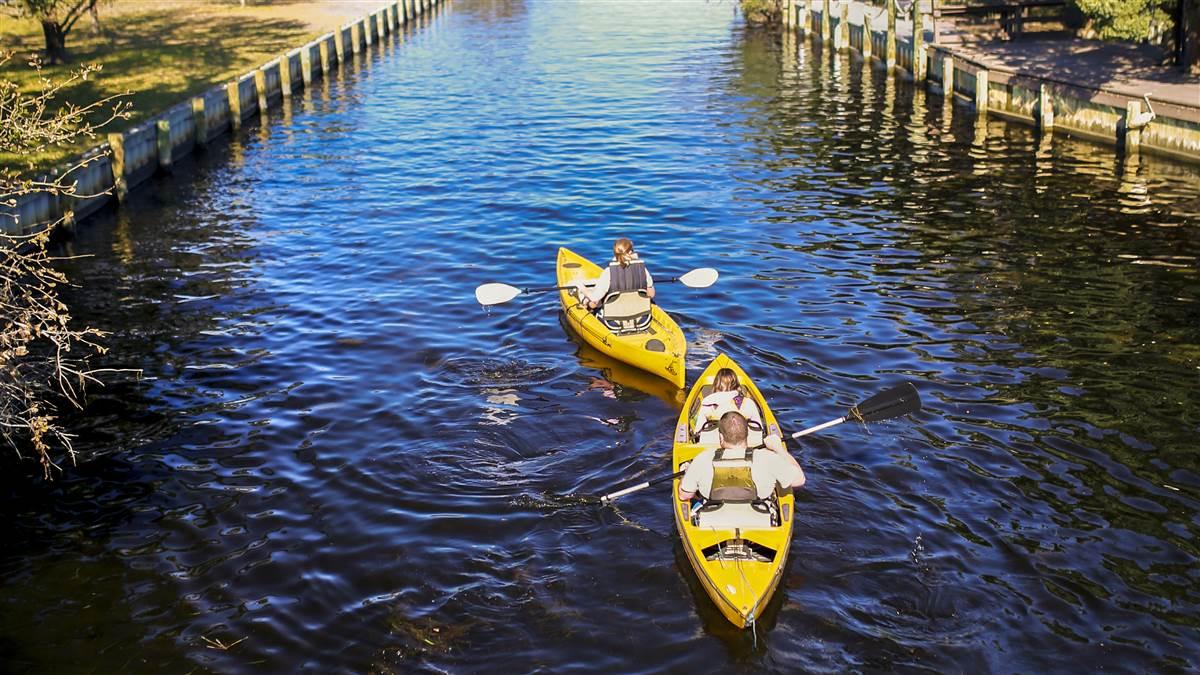 These island towns have general aviation airports with easy access.

Block Island, Rhode Island (BID). The airport is located just a mile from town on this New England/New York island that boasts 17 miles of beaches.

Catalina Island, California (AVX). Also known as the “Airport in the Sky” because it is located on the highest point of this island off the Southern California coast.

Friday Harbor, Washington (FHR). Located in the San Juan Islands off the coast of Washington, the airport is within walking distance of town. There is also an airport on Orcas Island (ORS).

Martha’s Vineyard, Massachusetts (MVY). A general aviation airport that also has limited commercial service. Also on Martha’s Vineyard is Katama Airpark (1B2), steps from the beach.

Nantucket, Massachusetts (ACK). Located on the south side of Nantucket Island on the Atlantic Ocean.

Put-in-Bay, Ohio (3W2). One of several islands in Lake Erie, Put-in-Bay is on South Bass Island, and there are airports on North Bass Island (3X5) and Kelleys Island (89D).

Tangier Island, Virginia (TGI). This quiet island is somewhat isolated but welcomes visitors to the lower Chesapeake Bay—in Virginia. Many people mistake it for Maryland.

There are just six airports granting access to the 200-mile stretch that is the Outer Banks, beginning at Sandbridge, Virginia, and ending just past Ocracoke Island, North Carolina. Fuel is only available at mainland airports Currituck County Regional Airport in Currituck (ONX) and Dare County Regional Airport in Manteo (MQI) so GA pilots plan accordingly. The string of peninsulas and islands separate three sounds—ocean inlets—from the mighty Atlantic Ocean. This stretch of ocean has claimed many ships, from seventeenth-century pirates to German U-boats, in what is rightly called the “Graveyard of the Atlantic.”

The trip is in hurricane season, falling a week after Hurricane Matthew caused flooding and damage in the Outer Banks. “In the days leading up to our departure I kept a close eye on the National Hurricane Center’s forecast,” Conor says. “Thankfully the atmosphere was quiet during our trip, and nothing materialized.”

Flying from the Washington, D.C., area, the Skylane skirts the no-fly zones around the nation’s capital and later the massive military installation at Norfolk, Virginia. How inspiring the United States armada looks from here, peering down at the aircraft carriers and other U.S. Navy ships in port. The couple tries to identify the ships and talks about the amazing engineering marvel that is the Chesapeake Bay Bridge Tunnel, a 20-mile-long four-lane bridge and tunnel structure first constructed in the late 1950s. Between its suspension bridges are two two-mile-long underwater tunnels so that from the air, it looks as if the bridges simply disappear.

The first stop is to see the Wright Brothers National Memorial at Kitty Hawk. Touching down at First Flight Airport (FFA) after overflying the monument, the site is more imposing than expected for the uninitiated. Visitors feel a certain sense of history and inspiration here, the brothers’ copper busts and the 60-foot granite monument towering above. The couple walks the memorial grounds to the locations where the brothers flew, visit the 9,900-square-foot visitors center, tour the reconstructed camp buildings. There’s a pilot lounge here, accessible by access code, as are others at the unattended airstrips on the Outer Banks. It’s hard to believe this well-maintained 3,000-foot-long airstrip was built in 1963.

Heading farther south, the couple stop at Hatteras Airport (HSE). It’s a lonely spot on this fall day but the perfect weather beckons them to walk to “town” for lunch. The walk is longer than expected and they begin to notice that things aren’t quite right here; television sets and washers and dryers and mattresses and toys and broken pieces of furniture are on the roadside, haphazardly piled up and strewn about. Hurricane Matthew cut a nasty swath through here just a week before and cleanup had not yet begun. Other than some chips and sodas from the bait and tackle store near the airport, they don’t find much. Such are the challenges of traveling in the off-season.

Back in the air again and headed for the prize: Ocracoke Island. This barrier island has been called “enchanted” and like Brigadoon, that mystical Scottish village that only appears once every 100 years, Ocracoke appears off the right wing like a vision. There are 16 miles of windswept beach here and a tiny village just one mile square. Visitors can easily walk into town from the airport (W95) and more easily walk straight to the beach, but the hotel has a van and a driver waiting. The van rattles and thumps toward the village (the van has seen better days) and arrives just in time to see the moment visitors have been rhapsodizing about for years—sunset over Silver Lake, the small hidden harbor inside the village.

The Anchorage Inn is modest, although its views are not. Balconies overlook Silver Lake and the marina, where anglers have been bringing in their catch since the early eighteenth century. It’s romantic, peaceful, tranquil: three words that doubtful could be used at the height of the season, when the thousands of tourists who arrive here on one of the three ferries to the island disembark. There are waterfront bars and restaurants, bicycle rental shops, gift stores, and wine and cheese shops. Tonight? It’s bedtime at 8 p.m. Or read a book by a bedside lamp. Or sit on the balcony and sip wine and trade flying stories. There’s a 10 p.m. noise ordinance in the village always, so even when the tourists are here, it’s a quiet place. Good sleeping town.

Transportation around the village is on foot, by bicycle, or by golf cart. Conor and Sam are avid bicyclists and have an app on their phones they are anxious to use and record their miles. It’s an easy loop around the village when you’re moving at their pace. To start the day, they have breakfast at The Pony Island Restaurant. “The Pony,” as the locals call it, is the oldest restaurant on the island and is owned by Vince O’Neal, whose family are original settlers on the island. The restaurant is famous for its big Southern breakfasts, but small plates for this sporty couple are very reasonable. It won’t win awards for décor, but its simple furnishings and remarkable old photographs from the restaurant’s beginnings in 1959 are charming.

Ocracoke is known for its wild ponies, believed to have washed up here from shipwrecks. They don’t wander quite like they used to; picket fences around the original old homes were to keep them out because they once roamed free. Now they’re protected on the national seashore. The Ocracoke Lighthouse was built in 1823. There are 90 family cemeteries on the island, some very old, some more modern. There’s a historic one that commemorates British sailors who were killed by a German submarine and whose bodies washed ashore during World War II. It’s actually a little piece of Britain and the British flag flies there all the time. 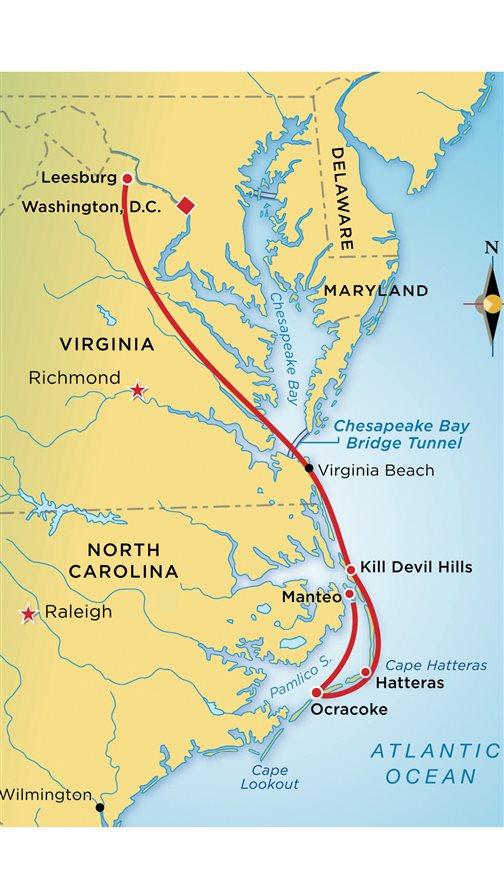 Visitors can’t do the town justice if they don’t partake in some pirate lore and plunder some shops. Teach’s Hole is where Blackbeard the Pirate, aka Edward Teach, lost his head in 1718. On Pamlico Sound he fought and lost his last battle; it took five pistol shots and 27 cuts to his body to bring him down, and then the British sailors chopped off his head. You can find out all the gory details at the Teach’s Hole and Blackbeard Exhibit on the Beach Road. However, every October the town is usually overrun with swashbucklers for the annual Blackbeard’s Pirate Jamboree. Sadly, Hurricane Matthew had put the kibosh on the 2016 jamboree and although Ocracoke has been cleaned up from the storm, measurements at buildings all throughout the island show the record water level the hurricane had caused.

This is a working waterfront, and at 4 p.m. the charter fishing boats bring in their catch. You can watch them unload, divvy up the catch, and clean the fish while enjoying a cocktail at Smacnally’s Bar & Grill.

Even budget weekends deserve a nice meal and the Flying Melon Café on Back Road did not disappoint. It was the word flying in the name that enticed the travelers, but the New Orleans-style cooking kept them there. Chef/owner Michael Schramel is not a pilot, but he has a big head, hence the “melon” in the restaurant’s name.

Charming, kitschy, romantic, relaxing—but all good things must end, so it is time to preflight and head back to the real world. At the airport is another couple who has flown their Cherokee in just for a stroll on the beach and lunch at Howard’s Pub (the restaurant had picked them up but they’d walked back). Stopping for fuel at Manteo, Conor and Sam discover another great flying destination on North Carolina’s Outer Banks—and make plans to return.