A former CNN producer teamed up with a certificated flight instructor to create an Atlanta-based company called SkyFire Consulting, among the first to offer formal drone training for police and firefighters. 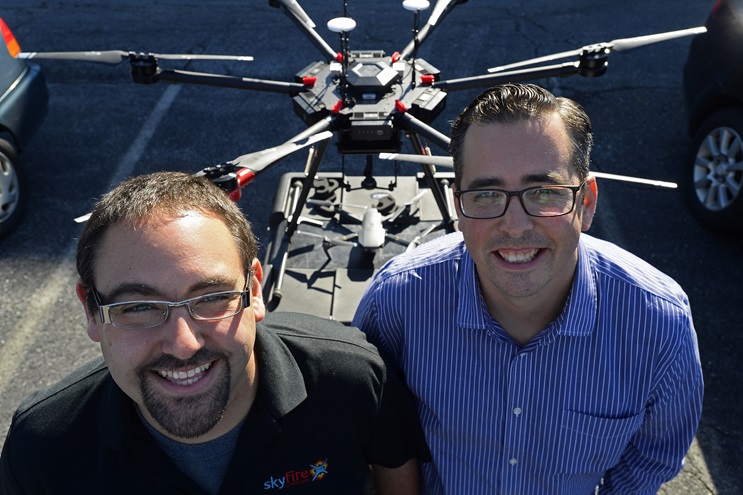 Matt Sloane left the news network known for pioneering the use of drones in broadcast journalism in January 2014, and was asked soon after to give a training session to police public information officer trainees, offering them a producer’s perspective on the news business.

“I had literally just gotten a Phantom 2 the day before,” Sloane recalled in a telephone interview, referring to the popular, small quadcopter made by DJI that helped create a consumer unmanned aircraft systems industry. After the program, four fire chiefs approached Sloane asking for help integrating unmanned aircraft into their emergency response arsenal. Sloane got hold of his friend Ben Kroll, a CFI and Cirrus Standardized Instructor Pilot with thousands of hours logged.

“We started the company the next day,” Sloane recalled. “By August we were at our first fire department.”

SkyFire Consulting has since worked with several fire departments across the country, including the Menlo Park Fire District in California, which has developed a robust drone program (the subject of a recent article that appeared in AOPA Drone Pilot) and is working to help other agencies and departments do the same.

While SkyFire is a DJI enterprise dealer and offers turnkey packages for police and fire agencies that include equipment and training, Sloane said the focus is on training. He is careful to differentiate his company from the myriad hobby store retailers and others selling public safety “packages” that may not come with effective training or other support. Sloane, who has personal experience working in emergency medical services, brought his first responder knowledge to the mix with Kroll’s aviation expertise, and said they started the company in large part to be an alternative to hobby retailers who know little or nothing about emergency services.

He also is working to spread the word to departments that have not yet shown the enthusiasm of the Menlo Park firefighters, and encourage adoption of drone technology.

“We’re trying to communicate to people that it’s easy enough now that you really should be doing it,” Sloane said.

Kroll said understanding the basics of airspace, aeronautical decision-making, and the safety culture that manned aviation has long since embraced, are all important to first responders who wish to make effective use of drones.

“It’s almost a disservice, I think, just to give a fire department a drone and say, ‘here you go,’” Kroll said. SkyFire provides customized training on location, as well as assistance with all the details of creating an unmanned aircraft flight department within the department. Sloane said the company is among the leading providers of assistance with obtaining Certificates of Authorization or Part 107 compliance (public safety agencies have the option). The pair also are gaining experience and expertise in the particulars of police and fire operations.

As the officers of Menlo Park noted in the recent AOPA Online article, effective air support from a drone requires both aeronautical and firefighting expertise.

“Really giving people all the tools … I think that’s what really separates what Matt and I are doing,” Kroll said. “If they just look at this as a toy, then eventually things are going to go wrong.”

SkyFire’s rise to prominence in the fledgling sector of the industry has given Sloane and Kroll a seat at various tables where officials are working to refine best practices for UAS air support. That includes the National Fire Protection Association committee formed to study the topic, which will release a technical standard in the coming year, Sloane said, that will be available for public comment in 2018.

The company also has worked with state-level agencies on much the same topic, and conducted training in all regions of the country, fielding inquiries from every state “and American Samoa” so far, Sloane said.

“We are in this for the long haul, and think we’re making a difference,” Sloane said.

Kroll said training programs created for fire and police departments typically start with two or three days of training, including classroom work on airspace, aviation procedures, and other knowledge required to pass a Part 107 test. Advanced training is also offered. The first day of basic drone training for emergency services is typically classroom time, and the hands-on portion starts on day two. Kroll teaches the basics of aircraft handling, and employs many of the same techniques he uses in a Cirrus as a CFI, such as the creation of realistic distractions to train the pilot to prioritize and maintain focus and situational awareness.

“I think the most important thing for us is setting the tone,” Kroll said, noting that first responders who lack prior aviation experience must understand that drones are “real” aircraft, size notwithstanding.

“It can cause damage and it can hurt people,” Kroll said.

The aviator with about 5,000 hours logged in manned aircraft still dabbles in that kind of flying, but has found that the unmanned variety are now taking up most of his time and attention.

“It’s become my sole focus,” Kroll said, though was quick to add that he still finds time to go flying “on the side.”

The particulars of SkyFire training, including live training at a facility where controlled burns add another layer of realism to the mix, will be the topic of an upcoming feature in AOPA Pilot.