Get the app Get the app
AOPA will be closing at 2:30pm ET Wednesday, November 23rd, and will remain closed Thursday and Friday in observance of the Thanksgiving holiday. We will reopen Monday November 28th at 8:30am ET.
AOPA Members DO more LEARN more SAVE more - Get MORE out of being a pilot - CLICK HERE
News & Media TFR set May 4 in Bedminster, New Jersey

TFR set for May 4 in Bedminster, New Jersey

AOPA is notifying members that the FAA will implement temporary flight restrictions from 9:30 p.m. on May 4 to 10 p.m. on May 7 in Bedminster, New Jersey, the location of the Trump National Golf Course Bedminster. 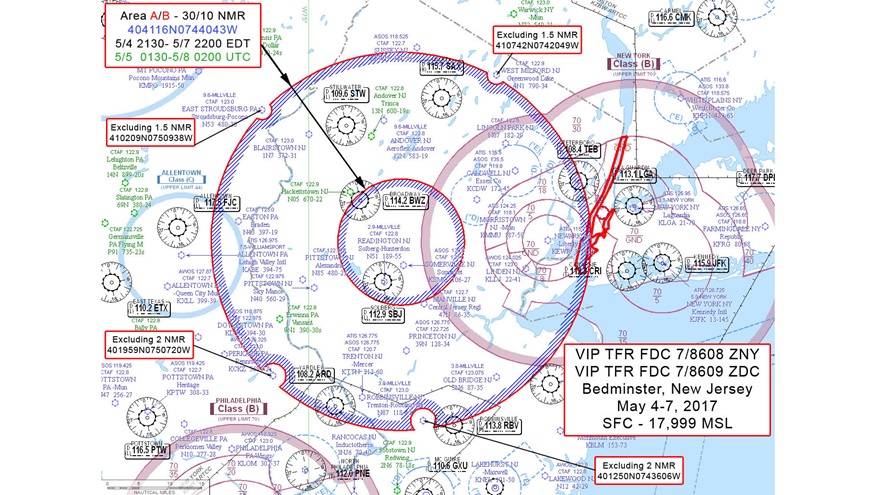 President Donald Trump will be visiting New Jersey, bringing with him a 30-nautical-mile-radius temporary flight restriction. The graphic, created by FAA System Operations Security and Jeppesen FliteStar software, should not be used for navigation. Image provided by NBAA.

Two general aviation airports within the inner core of the TFR, Solberg-Hunterdon Airport in Readington, and Somerset Airport in Somerville, will have all operations halted during the TFR’s effective period.

AOPA strongly urges pilots to check notams frequently during the period for changes to flight restrictions and effective times that could take effect on very short notice.

According to news reports, President Donald Trump was scheduled to attend a dinner reception May 4 aboard the aircraft carrier USS Intrepid, which is docked on Manhattan’s west side, before traveling to his golf club in Bedminster, west of New York City, for the weekend.

The TFR’s configuration includes a 10-nautical-mile-radius inner core and a 30-nm-radius outer ring centered on the Solberg VOR 035-degree radial at 6.9 nautical miles. The TFR will be in effect from the surface up to and including 17,999 feet msl with exclusions that are described in the notam.

All aircraft operations in the inner core are prohibited except law enforcement and security flight operations, and approved scheduled air operations as described in the notam.

In the outer ring, the New York Class B airspace Hudson River SFRA Exclusion and East River SFRA Exclusion is excluded from the TFR restrictions. All other aircraft operating within the outer ring are limited to aircraft arriving or departing local airfields, and workload permitting, ATC-authorized transit operations. Aircraft may not loiter. All aircraft must be on an active IFR or VFR flight plan with a discrete code assigned by an air traffic control facility. Aircraft must be squawking the discrete code prior to departure and at all times while in the TFR, and must remain in two-way radio communications with ATC, according to the version of the TFR notice posted by the FAA on May 3.

Some arrival and departure restrictions and other routing impacts will result from the TFR’s proximity to New York area airports.

“AOPA has strongly pressed efforts to find a solution for the negative impact TFRs have had on Lantana Airport and will now have on the two New Jersey general aviation airports that will be shut down,” said Nobuyo Sakata, AOPA director of aviation security. “AOPA continues to seek congressional support for minimizing the economic and operational impacts of TFRs, while still providing adequate security for the president.”

Dan Namowitz has been writing for AOPA in a variety of capacities since 1991. He has been a flight instructor since 1990 and is a 35-year AOPA member.
Go to Dan Namowitz's Profile
Topics: Security, Airspace, Notams