Get the app Get the app
Get the latest news on coronavirus impacts on general aviation, including what AOPA is doing to protect GA, event cancellations, advice for pilots to protect themselves, and more. Read More
Already a member? Please login below for an enhanced experience. Not a member? Join today
News & Media Simple, safe separation for drones

A university professor, pilot, and AOPA member in Nebraska hopes to gain some traction with a beautifully simple idea to keep drones and manned aircraft separated in the agricultural environment: a strobe light that warns manned pilots to give the drone crew time to land. 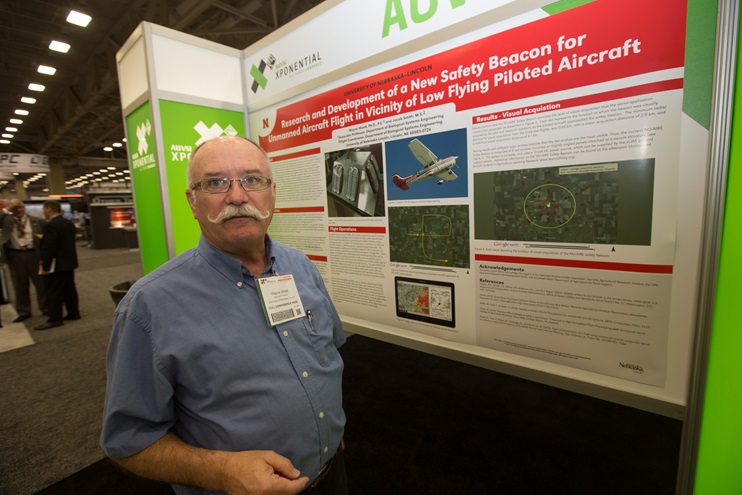 Associate Professor Wayne Woldt of the University of Nebraska, Lincoln, came to AUVSI Xponential hoping to attract interest in producing a strobe light system designed to warn agricultural aircraft pilots and other low-altitude manned operators of the presence of unmanned aircraft. Photo by Jim Moore.

Wayne Woldt, associate professor at the University of Nebraska, Lincoln, said a series of five test flights conducted in the summer of 2016 with a Cessna 172 approaching a ground control station confirmed that a cluster of off-the-shelf strobe lights mounted on top of a vehicle can catch a pilot’s eye nearly two miles away.

Woldt has been flying unmanned aircraft at an FAA-approved test facility in Mead, Nebraska, and said he has consulted with agricultural aviators to find out what kind of warning an ag pilot would need to steer clear of drones. He was told that a half-mile warning would probably suffice, and “I really feel like we met at least a minimum” after demonstrating that the strobe light cluster is visible at 1.8 miles away.

The concept is beautifully simple: Drone pilots would light the strobe when flying, and manned pilots would see it far enough away to approach and make their presence known, but not fly over that particular field right away. The remote aircraft crew would see and hear the manned aircraft with plenty of time to land and get out of the way, and then turn off the strobe to signal an all-clear.

Woldt, who has been flying since the 1970s and earned a private pilot certificate about a decade ago, said he has been pitching his idea to fellow pilots and regulators, with an enthusiastic response from the former but not much traction, yet, with the latter. He said he set up a display at AUVSI Xponential, where he was interviewed for this story, in hope of gaining some momentum for the concept, and perhaps finding a company to put a packaged system on the market. Making pilots aware of the strobe light and what it means (the color is red, found to be the most visible) was another part of his mission.

Woldt also works with farmers and other drone pilots who are new to aviation, helping them learn the rules and safely coexist. He welcomed the association’s move to open membership to remote pilots starting in February, as he sees it as an opportunity to spread the safety culture of manned aviation to the remotely piloted world.

“I think the AOPA effort is going to help a lot in that area,” Woldt said.