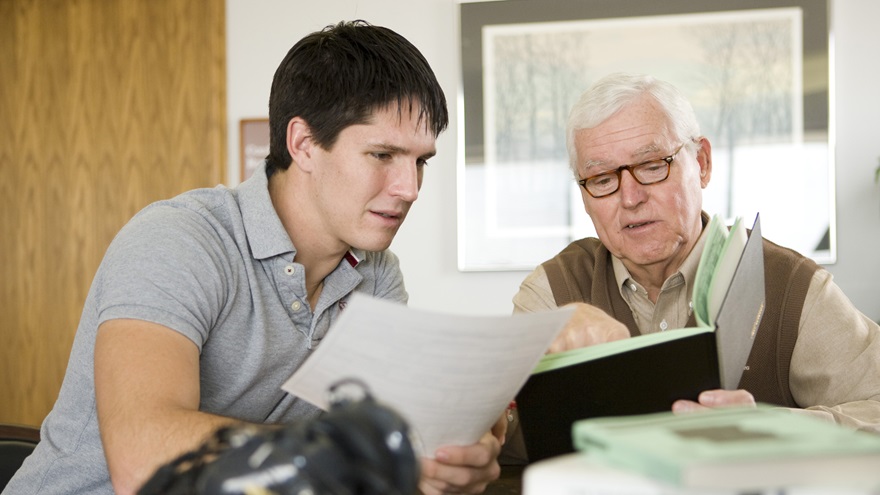 A young student pilot with an older examiner going over the required paperwork prior to the checkride. AOPA file photo by Mike Fizer.

The revisions of the year-old ACS, and the new ACS for the commercial pilot certificate, were posted to the FAA’s Airman Testing website on May 18.

A key goal of the change was to better integrate pilot knowledge and practical testing, and to make test standards more adaptable to rapid changes in cockpit technology.

Testing under the ACS remains comparable to the superseded PTS in terms of difficulty, time, and information required. The FAA describes the ACS as a “single-source set of standards” for knowledge and practical testing.

“The ACS updates to the Private Pilot Airplane certificate and Instrument-Airplane Rating incorporate corrections and changes; streamline some areas by consolidating task elements; and standardize phrasing and the sequence of certain task elements,” said David Oord, AOPA senior director of regulatory affairs and chair of the ACS working group.

“The revisions represent the FAA listening to stakeholder feedback and making improvements,” he said.

Applicants and flight instructors should note, for example, that in the revised Private Pilot–Airplane ACS and the new Commercial Pilot ACS, the Area of Operation on slow flight and stalls calls for an applicant to “establish and maintain an airspeed at which at which any further increase in angle of attack, increase in load factor, or reduction in power, would result in a stall warning (e.g. aircraft buffet, stall horn, etc.).”

As of June 12, that standard will replace the current ACS slow flight demonstration consisting of establishing an airspeed “approximately 5–10 knots above the 1G stall speed, at which the airplane is capable of maintaining controlled flight without activating a stall warning.”

That standard proved impractical in some aircraft, Oord said.

The FAA has produced a media presentation titled Airman Certification Standards; What’s New and What’s Next that details ACS modifications, updates, and background on their development.

Oord expressed appreciation for the FAA and other stakeholders following up on their resolve to seek continuous improvement in the ACS, as new volumes and revisions come on line.

“I am extremely proud of the work the group members have put in to make these new standards a reality,” he said. “The improvements, I believe, clearly speak for themselves.”

Dan Namowitz has been writing for AOPA in a variety of capacities since 1991. He has been a flight instructor since 1990 and is a 35-year AOPA member.
Go to Dan Namowitz's Profile
Topics: Pilot Regulation, Training and Safety, IFR