Get the app Get the app
News & Media Career Pilot: Revoked 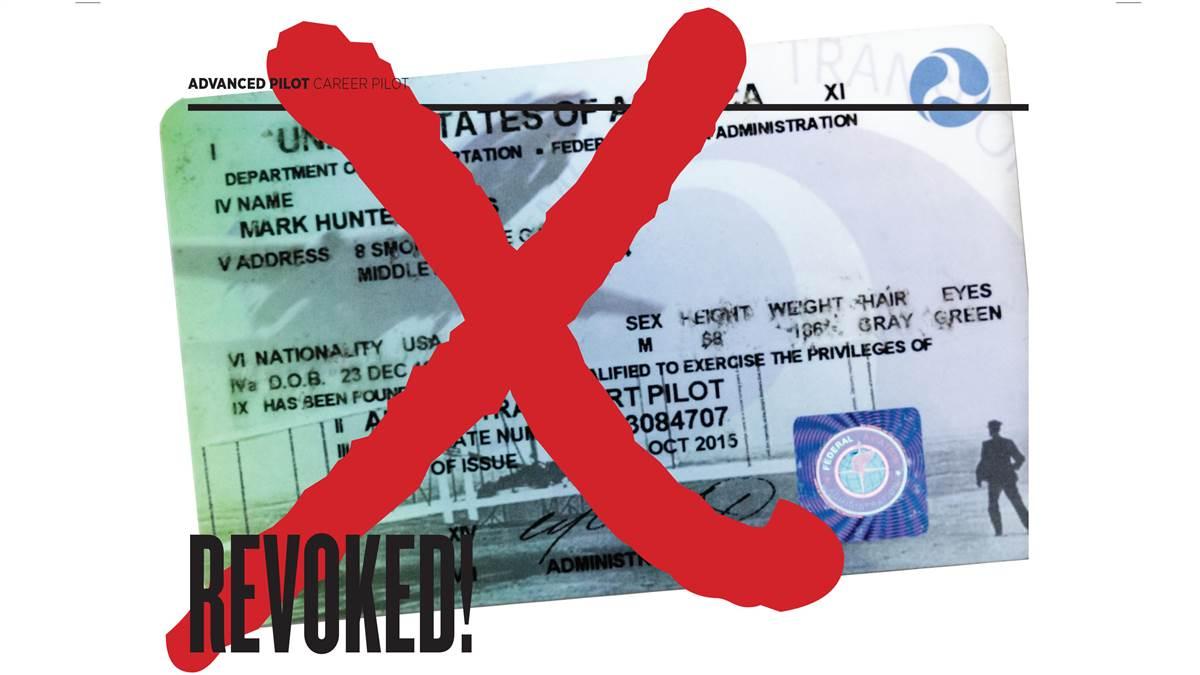 Nothing can derail a professional flying career quicker than a revocation of an FAA airman certificate. Despite the FAA’s new compliance philosophy, which makes a very good attempt at establishing a “positive safety culture”—and recognizes that inadvertent rule violations can be best addressed and remedied through education, counseling, or remedial training—there are some transgressions that command the ultimate penalty: certificate revocation.

FAA Order 2150.3B. the FAA Compliance and Enforcement Program, is the guidance document that stipulates the processes FAA personnel follow when pursuing an enforcement action. Perhaps the most grievous of all “sins” committed by anyone who seeks or has a certificate or operating privilege is falsification. The order states, “In general, the FAA considers the making of intentionally false or fraudulent statements so serious an offense that it results in revocation of all certificates held by the certificate holder. Falsification has a serious effect on the integrity of the records on which the FAA’s safety oversight depends. If the reliability of these records is undermined, the FAA’s ability to promote aviation safety is compromised.”

Here are other highly probably revocation actions: student pilots flying for hire or compensation; CFIs falsifying any endorsements; flight operations by anyone whose pilot certificate is suspended; virtually any flight operation involving the use of drugs or alcohol contrary to the limits specified by the regulations; transport of controlled substances; three convictions for DUI/DWI moving violations within three years; reproduction or alteration of a medical certificate; and conviction for possession of illegal drugs other than “simple possession.” Other illicit activities that could result in a certificate suspension, civil penalty, or even revocation are listed in the FAA’s order.

If you have stepped way over the legal line and the FAA has taken all your certificates in a revocation action, are you forever grounded? Not necessarily. In general, revocation actions last one year. But, recognize that you will need to reapply for every certificate and rating that you once possessed.

The first suggestion: Re-familiarize yourself with the information on the knowledge tests. Study up for the private, instrument, commercial, and ATP during your yearlong hiatus. If you previously held an ATP certificate prior to revocation, then you must complete an Airline Transport Pilot Certification Training Program (ATP CTP) as required by FAR 61.156.

If there is any saving grace to this predicament, it is that all previous flight time remains valid. There is no need to acquire another 40 hours of flight time, for example, to retake the private pilot checkride. But, before taking the practical test for each of the certificates and ratings that have been lost, you are required to receive three hours of instruction from a CFI.

So even if the worst should happen and you lose all of those pilot privileges because of a serious misdeed, all is not lost. In a year’s time you can be back in the sky, hopefully much the wiser. But, who will hire you? Well, the news there is not that good.

An unofficial survey of recruiters for a few “big name” regional and major airlines revealed that those carriers have a “zero tolerance” policy. The problem for these companies is the potential risk and the fallout in the event of an accident or incident involving a pilot who has been suspended or revoked. The press would, no doubt, zero in on the fact that the airman has a “history of noncompliance” with the regulations. This kind of PR is unwelcome.

However, there could be smaller operators that would be willing to give you another chance. This may depend greatly upon when the violation took place. Perhaps the “drug bust” or DWIs took place at age 20 but now, at age 35, you have led a decade of stellar living. After all, shouldn’t “rehabilitation” play a role in hiring decisions?

One option for returning to the industry is starting an aviation-related company yourself. Whether it is a single-pilot Part 135 operation, aircraft management, banner towing, a flight school, scenic tours, or aircraft sales, there are other avenues to the sky.

For a superb example of forgiveness and redemption read Flying Drunk by Joseph Balzer. It is an inspirational story by one of three Northwest Airlines pilots who, in March 1990, flew a Boeing 727 from Fargo to Minneapolis after swigging beer at a local bar the night before. All three were arrested for intoxication, convicted, sent to federal prison, and stripped of their pilot certificates.

As Balzer says, “It was horrible. I didn’t want to live anymore. I was so humiliated, embarrassed, ashamed.” Of course, he feared that he would never fly again. However, American Airlines—in an exceptional and laudable extension of second chances—restored his career where he returned to the cockpit.

As an aside, the industry has a tremendous resource for commercial pilots who suffer from alcohol or substance abuse: the Human Intervention Motivation Study (HIMS) program. As stated on its website, “HIMS is an occupational substance abuse treatment program, specific to commercial pilots, that coordinates the identification, treatment, and return to work process for affected aviators.” Good to know, just in case.