A neophyte steps up in the world

The day was April 18, 1969, according to my logbook. I was several months into my first full-time flying job as a co-pilot on a Beechcraft King Air 65-90 at Kansas City’s Charles B. Wheeler Downtown Airport (MKC). I was the number-three guy on the aircraft, which meant splitting the flying—not something a 600-hour-total-time young guy likes to do. 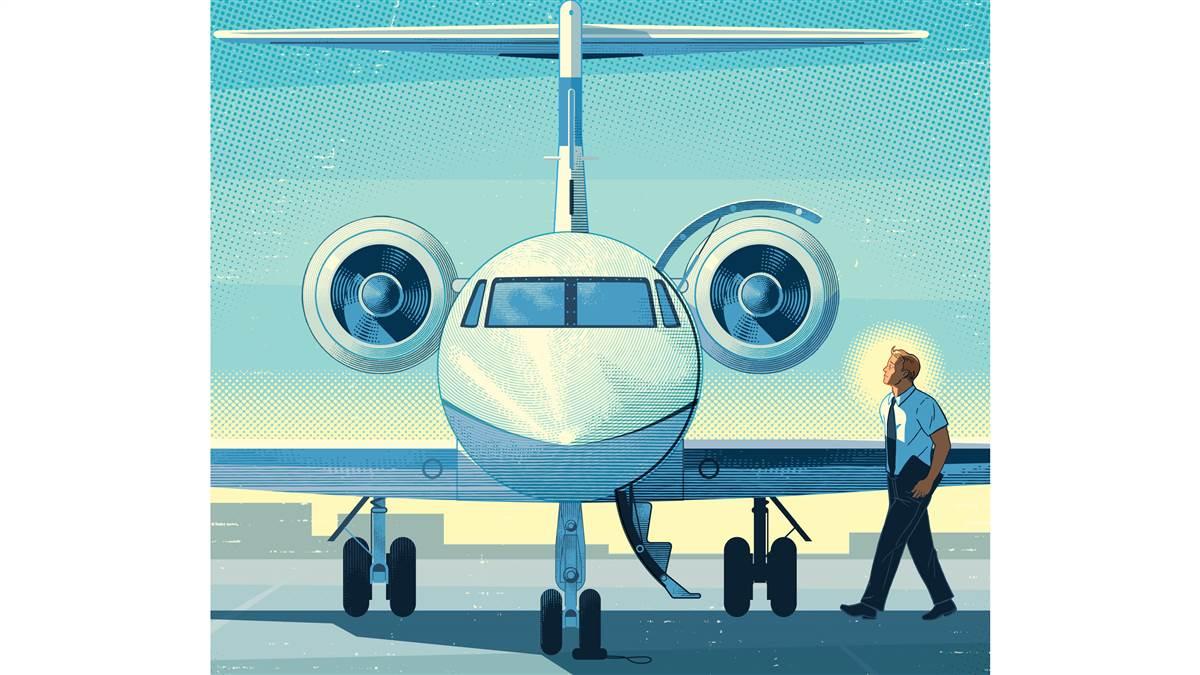 I had turned down a similar position after a short test flight on a new Falcon 20 the previous fall with Easy Carroll, the chief pilot for Russell Stover Candy. The company had traded its Howard 500 for a new Falcon 20, but it was only to fly about 125 hours per year. The lure of a jet job in those early business jet days was quite overwhelming—but not as important as a fatter logbook. The King Air job promised about three times as many flight hours per year as the Falcon, so I stayed with the King Air.

In an unending quest for more hours, faster airplanes, or a bigger paycheck, I unashamedly beat the bushes at both MKC and Kansas City, Kansas’s Fairfax Municipal Airport (KCK)—for the next job. In those days, before the restrictions of security fences and locked doors, it was easy to learn everything and everybody that had anything to do with every airplane of interest at either airport. All it took was time, a genuine interest in hangar talk, and subtle self-promotion.

Early on that memorable afternoon and on the way home from MKC I took a slight detour and went to Fairfax Airport to hit up a few of the operators. One of them was Midwest Executive Jet. It had a Learjet 24 and its own small hangar operation, which was half owned, as I recall, by H&R Block. I had met Chuck Weldon, the chief pilot and an ex-F–4 guy, and had given him my résumé. I left there that afternoon and went to my home in Park City, about seven or eight miles away in Missouri, on the other side of the river.

Shortly after getting home I got an urgent phone call from Weldon wanting to know if I could leave immediately on a charter flight to Fort Worth, Texas, to deliver some automotive parts. I high-tailed it to Fairfax and was immediately thrown into the right seat of the Lear 24.

The passengers boarded the aircraft, followed by the chief pilot. Then I got in. And I couldn’t properly close the door.Hey, it was legal! In those days, a Learjet co-pilot needed only a private pilot certificate and an FCC restricted radiotelephone operator’s permit.

The Lear’s two swivel chairs were removed, and there were two or three boxes of automotive parts and hardware on the floor. On the aft divan were two office workers going along for the ride since it was late in the day and the office was near closing time. Weldon had me run the checklist and was patient with me as he pointed out the location of a few items, especially the system test switches immediately forward of the throttle quadrant. I did the radio work but was surely lost for the next two or three hours while flying to Fort Worth and back.

After arrival in Fort Worth and while in the FBO, Weldon asked me to file the return flight plan as he took care of the fuel purchase and other business. On the phone, I remember having to ask him from across the room for input data—TAS, final altitude, and whatnot.

A few minutes after blasting off, but still in the climb, Weldon excused himself from the cockpit and attended to the two passengers on the aft divan. He did coach me with a watchful eye, keeping track of our altitude, and then started coaching me for the level off with about 2,000 feet to go.

I was hand-flying, of course, and obviously in way over my head. But what a thrill—and it still is, just thinking about it today. And get this: I got paid, although I don’t remember how much.

My second Lear flight was on February 1, 1970. I was a new-hire co-pilot at an Omaha engineering firm that had two Learjet 23s and three Beechcraft Bonanzas. The chief pilot sent me to a Learjet ground school in Wichita the previous week. Then, on the first Sunday after returning from Wichita, we had a trip to Iowa City and back.

The passengers boarded the aircraft, followed by the chief pilot. Then I got in. And I couldn’t properly close the door.

I remembered the ground school instructor showing us and demonstrating the operation of the upper and lower door halves, but all memory left me on that Sunday morning. And there was no training to proficiency to prevent the biggest danger while operating the early Learjet doors without snubbers—falling out of the airplane. He was a bit miffed, but the chief pilot came to my rescue and the doors were closed. I think we were on different frequencies for the next 17 months.

On startup and taxi out, the chief did all the radio work and never mentioned or used a checklist. He raised and lowered the landing gear and flaps himself. I tried to be helpful but to no avail, and I think the “miffed level” ratcheted up.

The following day it was the same deal. We left on a six-day trip to Boise, Seattle, Las Vegas, and Phoenix, and I never touched the controls, talked on the radio, or “pulled gear.” I remember that on the leg from Seattle to Las Vegas I was dutifully following our flight progress with a high-altitude Jeppesen chart and offered to tune the nav receivers, only to be told I could use number two nav for anything I wanted but leave the others alone. What a nice guy!

But, I guess, in hindsight, he couldn’t have been all that bad. After all, I finally got my first Learjet takeoff and landing seven weeks later, on March 21, 1970. And I only had 26 hours in type. How well I remember the day. It was the first empty leg since February 1, and we were returning to Omaha from Savannah, Georgia. Being polite and somewhat solicitous, my chief pilot stood by the aircraft door, motioned with his right hand to the cockpit, and said, “This is your leg.” I felt like my career had really begun.

Keith Lorch has been a corporate pilot flying Learjets since 1970, and has logged more than 3,000 Lear 60 hours in the past 15 years.