Get the app Get the app
Get the latest news on coronavirus impacts on general aviation, including what AOPA is doing to protect GA, event cancellations, advice for pilots to protect themselves, and more. Read More
Already a member? Please login below for an enhanced experience. Not a member? Join today
News & Videos The trip of a lifetime

A pack of Huskys in the backcountry

He’d overflown mountainous central Idaho many times in a corporate jet at 40,000 feet, but this was  different. Instead of looking down at the icy peaks with a God’s-eye view of the vast wilderness area, Learjet 35 co-pilot Zack Schmidt was maneuvering an Aviat Husky among steep-walled canyons lining the winding, rushing Salmon River. The craggy peaks towered above him, blocking any view of the distant horizon. 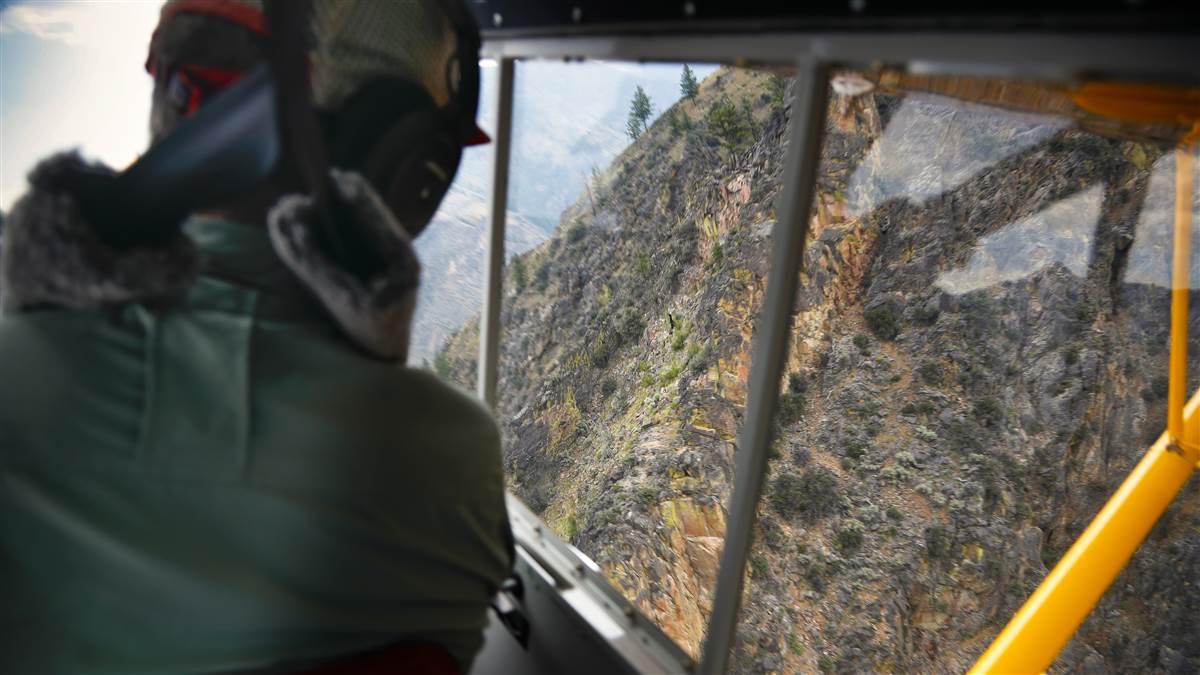 Members shared 165 favorite flying destinations in the Hidden Gem contest, including spots across the globe. Zack Schmidt and Jeff Auen enticed pilots with photos and descriptions of their favorites, which were selected by online voting from 10 finalists. 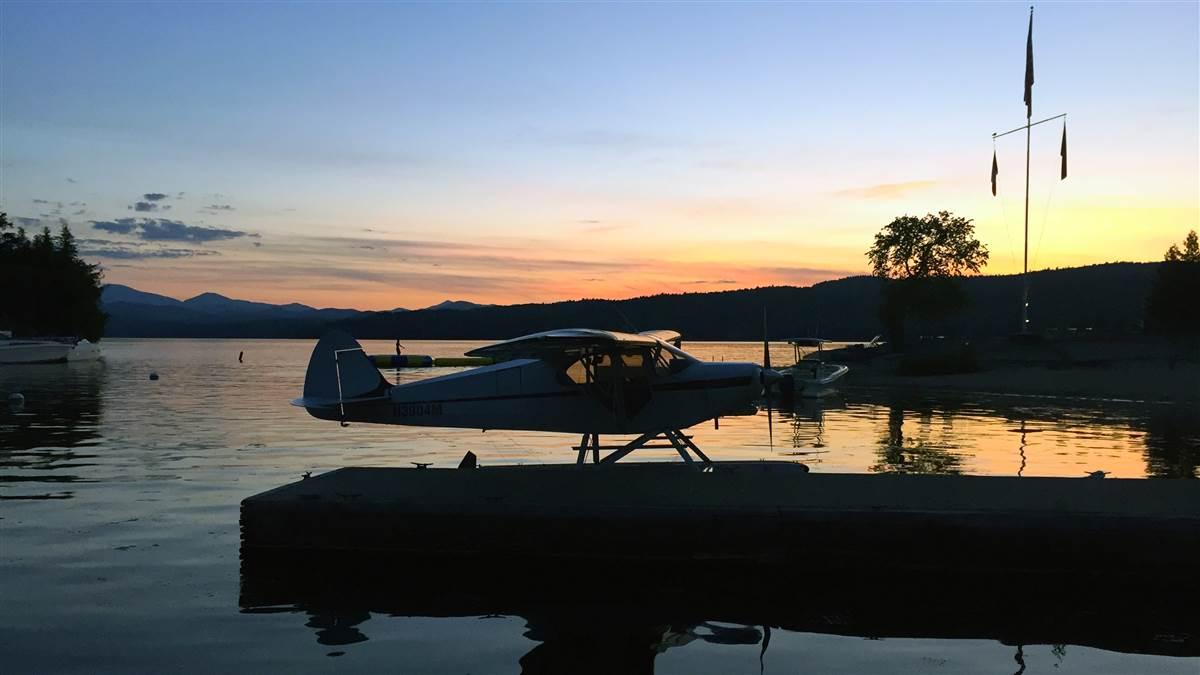 Basin Harbor, Vermont, offers “something for everyone, seafaring pilots, landlubbers, and nonpilots alike,” according to winner Zach Schmidt. “Stroll down to the harbor and go for a seaplane ride, play a round of golf, indulge in the varied dining options, or just sit by the water and read. Relaxation is inevitable.” 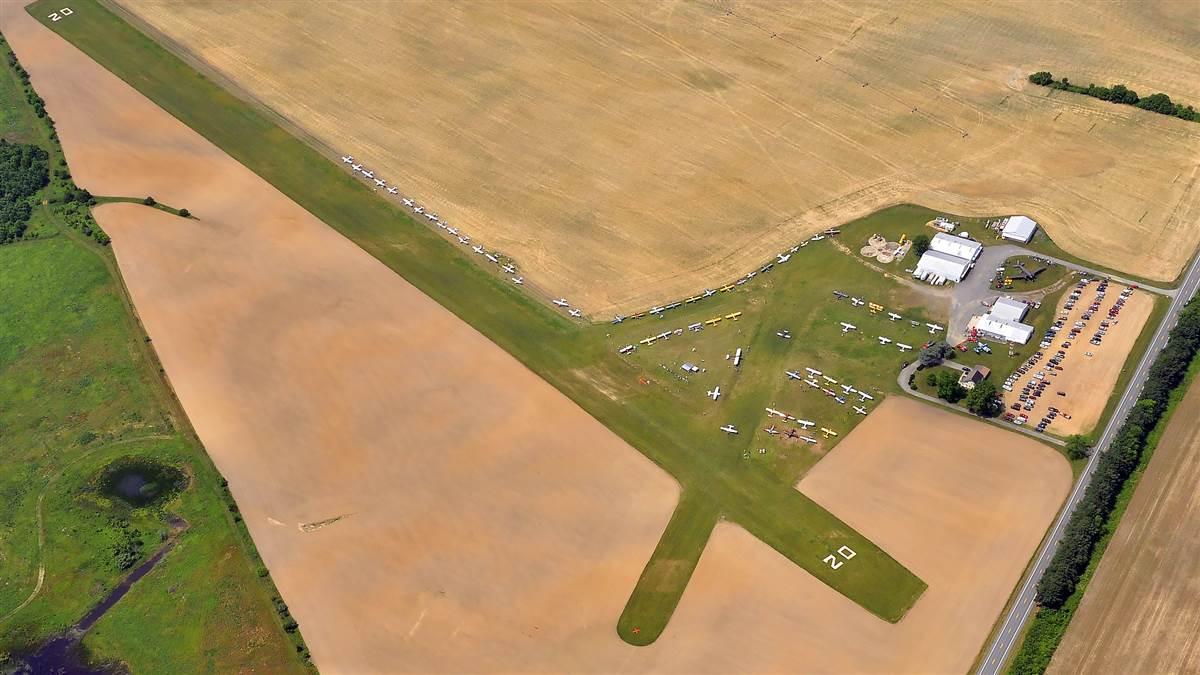 Massey Aerodrome on the Eastern Shore of Maryland attracts aerobatic, warbird, motorglider, and antique aircraft owners to well-attended events throughout the year, according to Jeff Auen. Tiny white-roofed houses at the approach end of Runway 2 are stations for a skeet-shooting range, he said.

And even though he was traveling at a fraction of the jet’s speed, the nearness of the canyon walls made the Husky’s airspeed of 100 miles an hour feel unusually fast.

“That’s Soldier Bar ahead on the right,” Aviat test pilot Steve Anderson told him from the other seat of the tandem bushplane. “There’s only one way in and one way out. We’ll land uphill and take off downhill.”

Schmidt scanned the rugged terrain but couldn’t spot the runway. The only remotely suitable landing area was a scrub-covered hillside with a short, curving, dusty goat trail on the east side. There weren’t any runway markers, or even a windsock.

“I don’t see a runway,” said Schmidt, 31, a U.S. Marine veteran who served in Afghanistan. “I only see something that looks like a cow path, or an ATV trail.”

Schmidt, one of two winners of the Hidden Gem contest sponsored by Aviat Aircraft and AOPA, was collecting his prize—a three-day journey through the magnificent Frank Church River of No Return Wilderness area in a robust, 200-horsepower Husky A–1C with an experienced backcountry pilot. (The other winner, Jeff Auen, was about a half-mile behind him in another Husky.)

Anderson assured Schmidt that the 1,650-foot-long, 15-foot-wide gash below them was an actual landing strip, and that they would soon be touching down there. But first they had to fly up the canyon for one mile to find an area wide enough to turn around, then slow the airplane, line up with the runway, and clear the cliff at the approach end with as little margin as possible.

“The trick is touching down as close to the end of the runway as you can, to avoid the bumps further down,” said Anderson, 36, a burly, sardonic test pilot who grew up and learned to fly in the Mountain West. “The surface is kind of rough, so when we touch down, just hold the stick all the way back, count to eight, listen for the buzzer, and hope for a good score.”

The landing went as planned, and the Huskys bounced and rolled to a dusty stop. They had to add power to taxi uphill to the far end of the strip.

Soldier Bar—named for 19-year-old U.S. Army Pvt. Harry Eagan, who was killed there in a 1879 battle against the Shoshone tribe—was the most challenging of the half-dozen airstrips the contest winners visited during three days of backcountry flying. And to Schmidt, it was the most memorable.

“I was looking right at it but couldn’t believe it was an actual runway,” he said. “This trip has expanded my definition of the word ‘runway.’”

Schmidt and Auen, a Maryland-based musician who built and flies an AirCam, won the first-ever Hidden Gem contest with their words. The contest asked pilots to submit their favorite “hidden gem” general aviation destination, with a brief description of why they loved it and a few photos.

“The surface is kind of rough, so when we touch down, just hold the stick all the way back, count to eight, listen for the buzzer, and hope for a good score.” —Steve Anderson, Aviat test pilotSchmidt wrote about Basin Harbor, Vermont, a place he had visited with his wife in a Cessna 182 the previous summer. Its grass field is next to a harbor that offers seaplane rides (see “Your Next Adventure,” facing page).

Auen had chosen Massey Aerodrome on Maryland’s Eastern Shore, another grass airfield with multiple runways, a museum, and welcoming aviators he had visited often during the restricted 40 flying hours in which he proved the airworthiness of the twin-engine, tailwheel airplane he assembled from a kit.

“It’s a beautiful site that dramatically changes with the seasons,” Auen wrote. Instead of a GPS identifier, he offered geographic directions that speak to the airport’s scenic, rural location. “When the river ends, head toward the smokestack in the distance and Massey Aerodrome is three miles ahead.”

Aviat and AOPA invited the winners to the aircraft manufacturer’s factory in Afton, Wyoming, to visit some of aviation’s other hidden gems—those in the rugged Frank Church Wilderness Area that are reachable only by aircraft, river, or trail because there are no roads.

Anderson met Schmidt and Auen at the Jackson Hole Airport and drove them to Afton, where they met Earl Polenz, a gregarious, good-natured Aviat test pilot; retired airline captain; and outdoorsman.

The winners also were introduced to their airplanes: a pair of new, 2017 Husky A–1Cs with fuel-injected 200-horsepower engines, reinforced landing gear, and lightweight VFR instrumentation. “This is the newest airplane I’ve ever flown in my life,” Schmidt said. “It’s only got 20 hours on it. That’s almost unbelievable.” 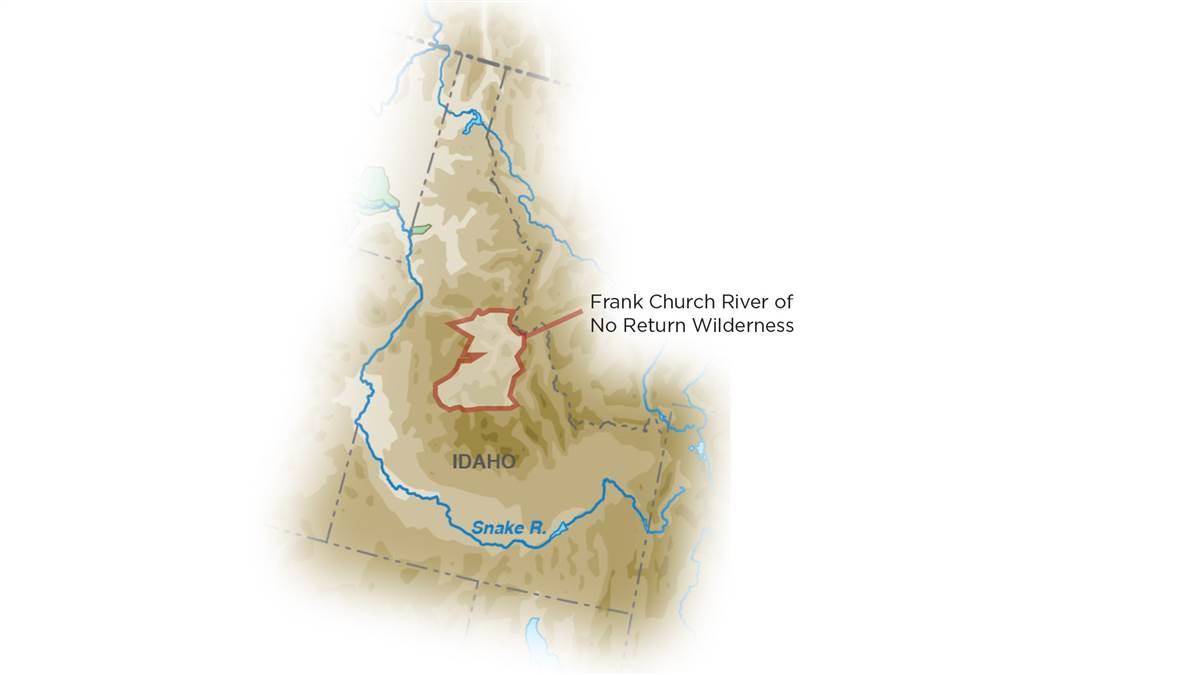 The Aviat pilots let the winners decide who would fly with whom. Schmidt initially teamed up with Anderson and Auen with Polenz, with an agreement that they would switch two days into the trip. But each of the pairs got along so well that no one wanted to change. They ended up keeping their flying partners throughout the four-day excursion.

The Huskys were loaded to the gills with baggage, gear, emergency supplies, and Auen’s guitar. The fuel tanks were topped off. The plan was to fly west to the Jerome County Airport in Idaho, fill up the tanks, and then head north past Sun Valley and into the Sawtooth Mountains that afternoon. But it was already getting hot, and surface temperatures were expected to reach into triple digits that afternoon. Afton is located in a deep valley, and clearing the ridges to the east would require climbing to 10,000 feet, with a density altitude of more than 13,000 feet.

Anderson was asked whether the aircraft should spiral up over the valley to gain altitude before flying west toward higher elevations, but he was certain the Huskys’ ability to dig in and climb like mountain goats made that unnecessary. “These airplanes have a great low gear,” he said knowingly. “We’ll go GPS direct.”

After crossing mountains and overflying the lava fields and desolation at Craters of the Moon National Monument, they encountered a thickening haze from western wildfires burning far to the southwest. After refueling, it was a north turn into the mountains. The winds aloft (and turbulence) were mercifully light through the valleys to Sulphur Creek for lunch, then the Flying B Ranch where the group would stay for the next two nights.

At Sulphur Creek (pronounced “crick”) was Paul Collins, a Husky-flying, outdoor-loving, Ford Edsell-driving retired surgeon who pitched in as a flying tour guide. Collins has hiked, flown, and rafted throughout this region, and he recounted stories of the people, places, and history here while flying and shared them over the aircraft radio.

Collins brought a techie friend with him and they installed webcams at Flying B Ranch and another airstrip to provide other pilots with real-time information about weather conditions. “A glimpse at the current wind and sky conditions can mean so much,” he said. “The weather here can change so fast.”

Pilots here tend to avoid flying in the middle of the day for reasons that quickly become obvious. Afternoon heat drives density altitude to absurd heights, thunderstorms are spawned with little warning, and swirling winds create jarring turbulence and powerful thermals. The winds were still light at takeoff for the short flight to the Flying B Ranch, but the sky overhead was darkening by the time of arrival.

The ranch has a gorgeous, well-irrigated, 2,100-foot grass airstrip that has been a flying destination for more than 60 years. That’s plenty of room for Huskys, even heavily loaded ones. But the approach to the runway when landing south (upstream) requires clearing a tall bluff on downwind, then plunging into the canyon and descending quickly on base—and then avoiding trees on short final.

Fortunately, cool air over the river helped the airplanes descend quickly and easily. After the Huskys were tied down and the gear unloaded, the pilots jumped into clear, cold (52 degrees Fahrenheit) Salmon River to cool off—which took about two seconds.

After sunset, Auen broke out his guitar and, with an almost encyclopedic knowledge, played for guests and staff at the rustic lodge who requested songs from Jimmy Buffet and Johnny Cash (although I Married Up by Antsy McClain drew the most enthusiastic response).

The trip concluded with a two-hour flight out of the mountains to Boise, where Class C airspace; air traffic controllers; and impossibly long, wide, paved runways brought the winners back to reality.

Auen said he was already planning to return in his AirCam.

“I don’t know when it will happen,” he said, “but it will happen. I’m going to bring my family here and show them some of these magnificent places.”

With the redundancy of two engines, Auen said the AirCam would be terrific for aerial exploration. But getting it here from Maryland would require time and effort. “It’s a long cross-country,” he said. “But I’d look forward to doing it.”

Schmidt said he’ll take lessons from this “once in a lifetime trip” along with him on every future flight.

“What we did in the Idaho backcountry these past few days is about as far across the aviation spectrum from my day job as you can get,” he said, “and most of it, I just wouldn’t have been able to grasp from a book or manual or in a simulator.

“The hands-on training will surely apply to any sort of flying I do in the future, and I believe it has already made me a safer and more competent pilot, which my family and future passengers will certainly appreciate.”