Get the app Get the app
AOPA will be closed on Monday, February 17, 2020, in observance of Presidents' Day.
Already a member? Please login below for an enhanced experience. Not a member? Join today
News & Videos Training Tip: The night-flight environment
Sponsored by Aircraft Spruce

For many people, the full impact of the switch back to standard time doesn’t register until they step outside at the end of a workday to find the sky dark and street lights blazing. For student pilots, there’s an upside to this jarring change: After-work flight lessons become convenient opportunities to satisfy the night-flying requirements for the private pilot certificate. 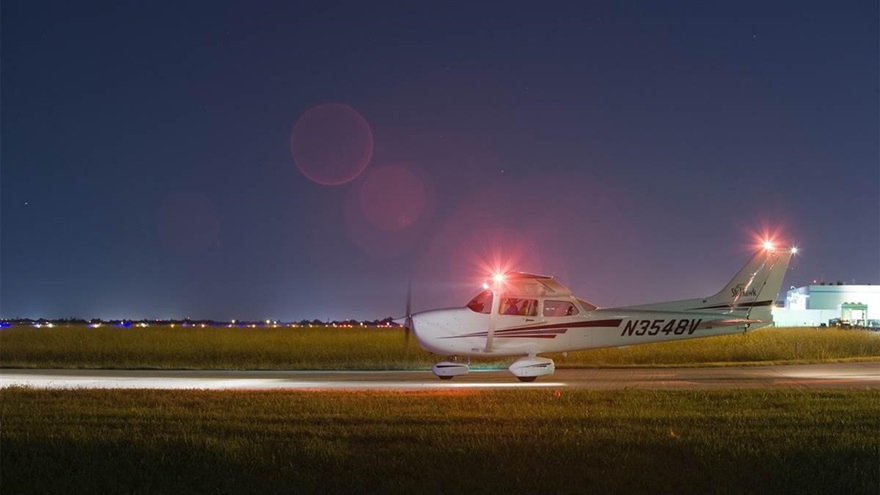 Along with separate rules and equipment requirements, the night-flying environment—or environments, because night-flying conditions can vary widely—poses numerous challenges not encountered in daylight.

As a rule, night flying requires a pilot to depend heavily on the flight instruments for aircraft control. Your flight instructor, who harps in daytime about keeping your eyes outside the cockpit, may soften the tone at night—especially on dark, moonless nights, when the horizon is invisible or nearly so. Control aided by reference to instruments will be important when approaching airports surrounded by dark, featureless terrain.

A hazard from the lack of a visible horizon can be cloud layers that mimic it with disorienting effect. Lights on the ground can upset a pilot’s orientation. “Autokinesis”—an effect that makes stationary lights appear to be moving—can be induced by gazing too long at the light source.

A lighted runway in the midst of dark terrain may seem to slope upward or downward. This illusion is known as black hole effect; also be alert for it when approaching over water.

Before a night cross-country, review the characteristics of destination airport runways—including whether a VASI, PAPI, or other system is installed. Check notices to airmen to verify that the system is operational.

You may know that getting your eyes adapted to the dark is a gradual process that can be instantly undone by sudden exposure to bright light. Easing into night flight by starting your orientation flight just at dusk, and progressing into full night flying, is similarly helpful and realistic.

Make sure your required minimum three hours of private pilot night training includes “one cross-country flight of over 100 nautical miles total distance” and “10 takeoffs and 10 landings to a full stop (with each landing involving a flight in the traffic pattern) at an airport.”