Get the app Get the app
Already a member? Please login below for an enhanced experience. Not a member? Join today
News & Media High-flying singer

AOPA’s 2017 regional Fly-Ins are infused with aviation. How thoroughly? At the Norman, Oklahoma, event Sept. 8 and 9, even the musician providing entertainment at the Friday evening Barnstormers party—which will be held on the ramp at University of Oklahoma Westheimer Airport—is a pilot, as well as an active flight instructor. 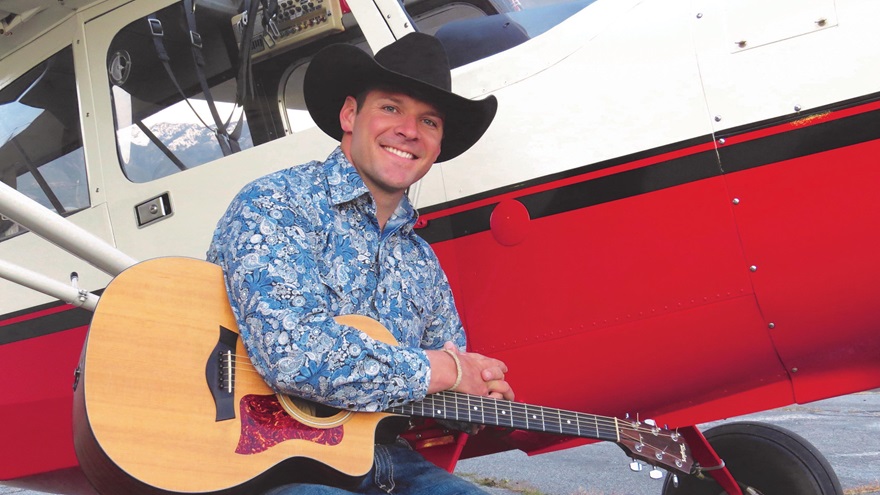 John Wayne Schulz also is a cowboy and a horse trainer. In fact, he sees some striking similarities between training pilots and training horses. (You’ll have to keep reading, I’m not giving them away that quickly.)

Schulz grew up in south Texas, just south of San Antonio, where his family has raised cattle since 1857. “Even growing up in the ranching community, I’ve just always had my eyes up toward the skies—like a lot of people,” he said. “If I’m not training a horse, I’m training a student pilot.”

When Schulz was six, an airline pilot let him into the cockpit of a Boeing 737. “I don’t remember a lot of things from 6 years old, but that’s one of the things I remember,” he said. His first flight in a Cessna 172 was a gift for his thirteenth birthday. “I was hooked—that was it.” Schulz completed a fast-track training program, becoming a pilot in 2014, and proceeding through CFII and MEI.

Schulz moved to Utah three years ago. “I wanted to learn to fly where there was high elevation, and to learn how to fly in all four seasons. And I’m glad I did. I’ve encountered things out here that I probably wouldn’t have encountered in Texas.” Today he works full time as a flight instructor; serves in the Marine Reserves, where he’s assigned to a tactical squad; and trains horses.

Musically, his roots are in traditional country. “As long as I’ve been interested in aviation, I’ve loved singing. I was always singing as a kid,” said Schulz, who put together his first band at age 13 with musicians in their 50s and 60s—playing venues where he was too young to be in the audience. “I would play dance halls on the weekends, whenever I wasn’t in school. We were playing the old, traditional country music” by artists such as Johnny Cash, Merle Haggard, and Willie Nelson. That’s the sound he emphasizes today. “I’ve always leaned more toward the old, traditional stuff.

In 2011, his mother was diagnosed with cancer. “I told her I would do anything for her. She wanted me to try out for American Idol. I thought she’d want her favorite cake baked, or for me to take her to have her nails done.” He made it to the final cut, just before 12 men and 12 women are selected for the live show—where the public votes for a winner. “That was a blessing in disguise. Right after I was cut from the show, my mother passed away from breast cancer.” Schulz was able to spend her final months with her.

After that, however, he did three overseas American Idol tours for deployed military, and enjoyed the chance to visit the cockpits of military C-17 and C-130 transports. In early 2016, he was asked to come back for the show’s final season, where his audition was the second-most-viewed—again, he stayed in the competition until the live-show selection. “I’ve never had my heart set on being famous and making it big,” he said. “I just love music, and I like living a normal life.”

Schulz also competes in rodeo, and received a personal invitation from singer George Strait to compete at his annual team roping classic. “It’s neat that I got to meet him. He’s always been my idol. Ever since I was a kid, I’ve tried to emulate that clean-cut, stick-to-your-roots style that he has.”

Those similarities between training horses and training pilots?

“I start colts from zero interaction with humans, and I’ll teach these colts to roping off of them and competing off of them—to what I’d call finished. Believe it or not, there’s a lot of correlation between teaching horses and teaching humans.” Horses have strong body language, he explained. “Students in the cockpit do the same thing. You can physically see the body language change. Training horses has actually made me a better flight instructor, believe it or not.”

Today Schulz trains mostly in Cessna 172s, and the Piper Arrow and Twin Comanche—although he and his roommate are airplane shopping, and hope to find a tailwheel airplane.

More information about Schulz is available on his Facebook page.

AOPA's fly-in Sept. 8 and 9 will feature in-depth workshops all day Friday and then an exhibit hall, an aircraft display, and the Barnstormers Party that evening. The main event kicks off Saturday with a pancake breakfast, free seminars, and more.