Get the app Get the app
News & Media A woman, a plan, an airport re-energized

A woman, a plan, an airport re-energized

Nadine Kelley had no idea how far her words could go when she stood up at a Lane County, Oregon, economic development meeting in January 2014 to point out a lack of creature comforts at the airport in her home town of Cottage Grove.

With a bare cement slab to be seen where a fixed-base operation building had been hauled away years ago, and nothing else to greet arriving pilots, the overall appearance of disrepair and neglect was hardly the kind of welcome mat a community with much to offer beyond the airport grounds should be putting out.

To say that Kelley’s words started a groundswell, making her into something of a local aviation celebrity even though she doesn’t fly, is no exaggeration.

The Oregon Aviation Historical Society, a nonprofit headquartered at Cottage Grove State Airport that holds an annual free-admission Stearman Fly-In, stepped up to help figure out the finances (to be funded by donations), and helped Kelley, a newcomer to civic activism, begin researching what type of building—A trailer? A yurt? A stick-built structure?—would make a good airport welcome center.

The Oregon Department of Aviation pitched in, enthused that the community was taking steps to enhance the utility of the new runway and a planned new taxiway and ramp for the airport that is also known as Jim Wright Field.

Stick-built won out over the other construction options. And “after much fumbling around, excitement, frustrations, advice from the peanut galleries and lots of perseverance we finally started building in April 2017,” Kelley wrote in a memoir about the project which she titled, “We just wanted a bathroom in Cottage Grove, Oregon.”

The sailing was smoother after that, and on Aug. 15, the Cottage Grove State Airport community celebrated the grand opening of a 432-square-foot tourist information center featuring a covered patio area for aircraft viewing; information about “hotels, restaurants, shops, covered bridges, museums, 2 lakes, biking, and 2 golf courses,” a courtesy car, and two bicycles for ground transportation, Wi-Fi—and yes, a “real bathroom.” 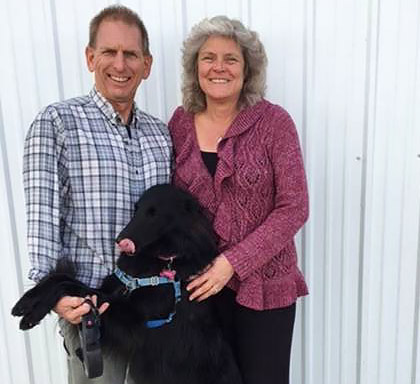 The grand opening included a ceremony to present the keys to the building to the state aviation department as the airport’s owner. Pilots flying in to attend in the celebration found a 55-cent-a-gallon discount on avgas available when they refueled to go home.

Visitors arriving in Cottage Grove by general aviation aircraft are also likely to meet unofficial airport greeters Shawn Kelley, Nadine’s husband, who keeps an ear to the common traffic advisory frequency from their home nearby, and the Kelleys’ dog, Kayla.

To recognize Kelley for spearheading the project, and to spread the word about the upgrade, the Oregon Pilots Association named Kelley its 2017 Volunteer of the Year, presenting the award at its annual convention on Aug. 26.

“Nadine has worked hard to make the Cottage Grove Airport a desirable destination for the pilot community,” the group noted in the September/October edition of its newsletter, Prop Wash.

If a visit to Cottage Grove, with its lakes, golf course, and natural charm, seems like a good fit for a day on your vacation schedule next summer, Kelley suggests penciling in “8/18/18,” so you can be on hand when the airport becomes the venue for an attempt to set a Guinness World Record for the largest toga party.

The effort represents a thematic follow-on to the community’s appearance in the 1978 movie National Lampoon’s Animal House, which popularized toga parties. The film’s concluding scene of a homecoming parade was shot on Cottage Grove’s main street.

With the hard work now done, enjoying the fruits should go on a long time. Kelley, sounding well satisfied during a phone interview with the results of the community effort she sparked, reiterated her amazement as expressed in her article about the project at how quickly the airport’s turnaround came about after she spoke up at a community meeting in early 2014.

“I never thought my husband and I would or could have accomplished something of this magnitude. We are just regular people with a desire and an idea. A lot can happen when people believe and work together,” she wrote.

Dan Namowitz has been writing for AOPA in a variety of capacities since 1991. He has been a flight instructor since 1990 and is a 35-year AOPA member.
Go to Dan Namowitz's Profile
Topics: Airport, People, Travel