Get the app Get the app
Already a member? Please login below for an enhanced experience. Not a member? Join today
News & Media Comedy flying a serious business for Eric Tucker

Some people’s dream is to fly. Eric Tucker’s dream was to land. 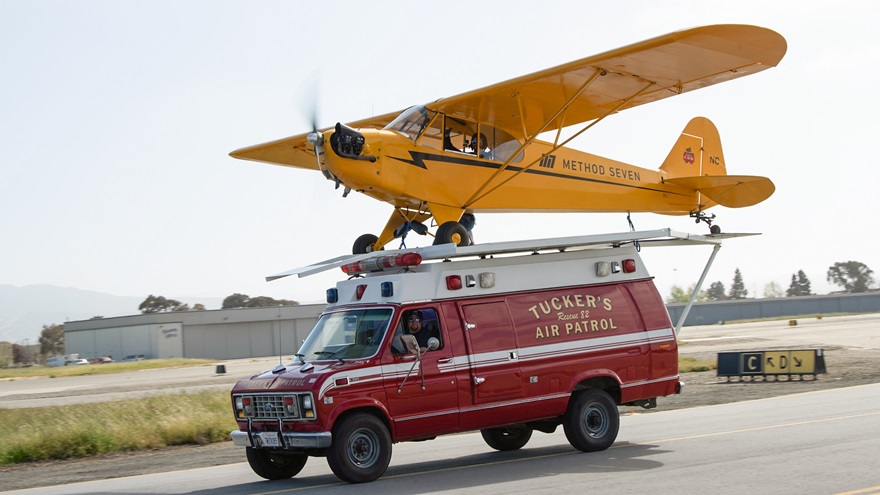 Justin Ramsier drives a 1990 ambulance while Eric Tucker pilots his J-3 Cub from a platform attached to the ambulance roof. Photo courtesy of Method Seven and Donald Beirdneau.

But not just anywhere. By age 12, Tucker, who grew up surrounded by the show business of aviation, and knew many of its star performers, was beguiled by the idea of landing an airplane on top of a moving vehicle in a feat reminiscent of barnstormer days and “the wacky aerial stunts they did.”

Well, it was a kid’s dream. What you’d expect from the son of Sean D. Tucker, an aerobatic performer with serious star power, and the 2017 R.A. "Bob" Hoover Trophy winner.

Tucker put the dream away and went about being a teenager, although he did solo an aerobatic airplane on his sixteenth birthday and joined the ranks of teenage pilot-certificate holders.

Two things happen when you grow up around the airshow greats of your time with an awareness of your “incredibly rich upbringing in aviation”: You become a professional pilot, and you perform in airshows.

You also teach the skills that dazzle and amaze the spectators on the ground but provide pilots with life-saving abilities as an upset instructor. And in his work as a corporate pilot flying a Beech King Air 350 twin turboprop and a Falcon 900 tri-jet, Tucker, now 37, had come to recognize that basic stick-and-rudder skills were lacking in many pilots, including experienced professional pilots.

“The primary reason why you have so many loss-of-control accidents is a tragic loss of stick-and-rudder skills in corporate and commercial aviation,” he said in a recent phone interview from Salinas, California. “The more experience you have there, the less in touch you are with stick-and-rudder skills.” He ticked off a few examples.

About two years ago, when Tucker was working on a syllabus for an upset-recovery instructor training program, the old dream began to stir. An idea began to take shape to use the comedy-act style of flying he loved to deliver a serious message about stick-and-rudder skills.

He needed just two things: the right airplane, and a vehicle to land it on.

He found the airplane, a Piper J–3 Cub, in Georgia. He got as far as Texas before breaking down at a lonely airport on Memorial Day Weekend last year. (If you ever break down on a holiday weekend, this is how to do it: The repair shop on the field specialized in Piper Cubs, and the mechanic lived at the field.)

“Twenty-one fuel stops later I made it home,” he said.

Tucker’s wife took on the assignment of locating a ground vehicle, which brought her to Craigslist. With a car being too small and a motor home out of the question, she told him, a lucky break came along in the form of a “screaming deal” on a 1990 ambulance formerly owned by the Ponderosa Fire District in Arizona.

Tucker had designed a platform to attach to the roof of the ambulance for landings, so now he was ready to practice. 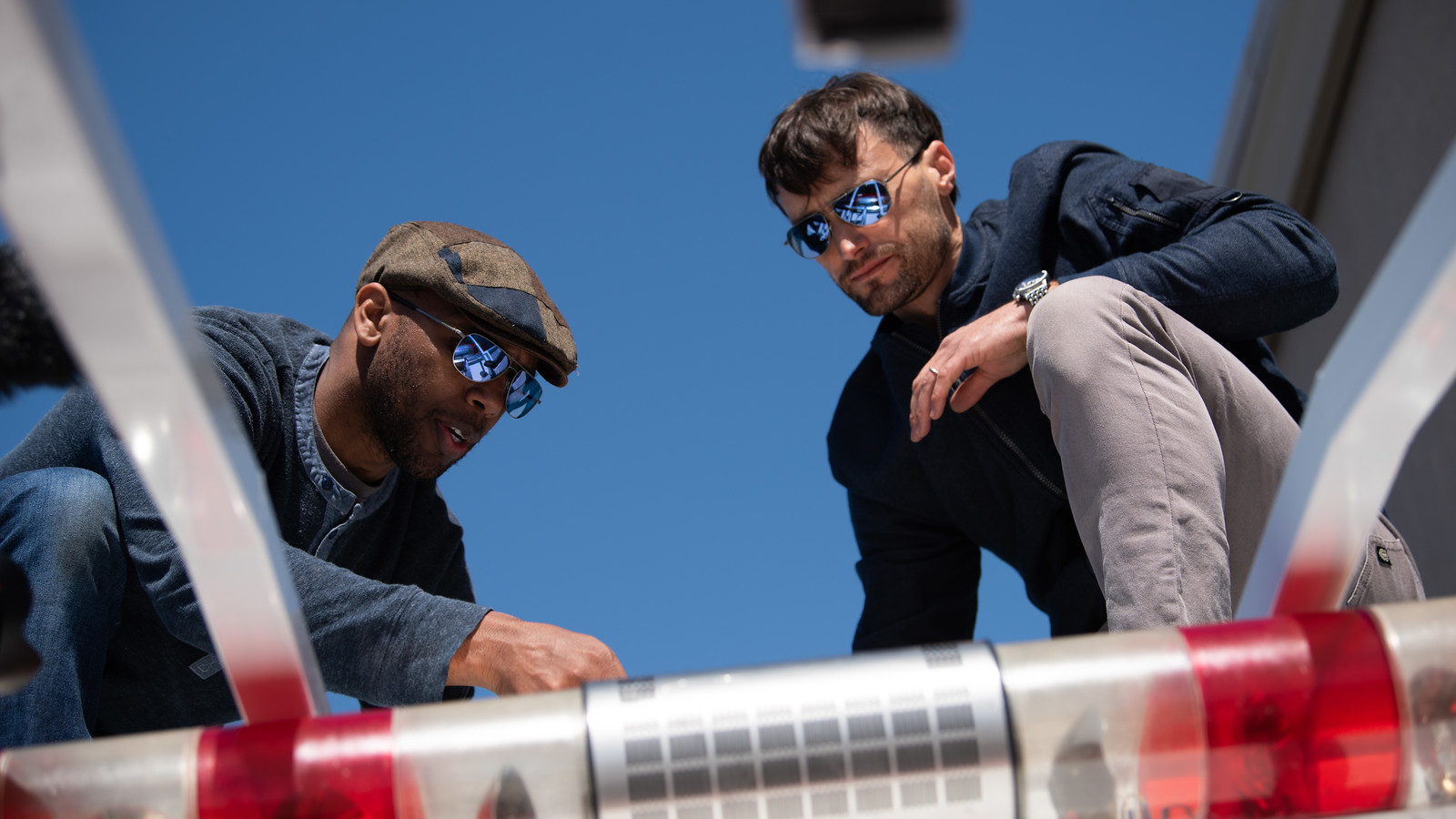 Landing a J–3 Cub on top of a moving ambulance isn’t an aerobatic feat, he said, but rather a type of formation flying. (Who says you must form up with another airplane?)

Adopting formation-flying principles—in which the lead ship, or ambulance, maintains a predictable track and the “wingman” forms on the leader, kept things smooth, and minimized distractions such as the need to talk on the radio. Tucker said he had seen communications problems reduce other pilots’ attempts to land atop a vehicle to chaos.

“Without formation skills whole thing would be totally impossible,” he said.

In this case the leader’s job was to drive down the runway at 55 mph, right on the centerline. Tucker would focus completely on joining up and landing, so if they got within 1,500 feet of the runway’s end before that, the leader would alert him, and he would abort.

Tucker and Justin Ramsier, the ambulance’s driver, tested the technique in three stages. With about a mile of runway available, the first step was to figure out how to approach within about 10 feet of the ambulance; the vehicle became almost impossible to see the closer he got to it. It also generated an impressive amount of wake turbulence for the Cub.

Next was to “get down and stable” for a touchdown in the middle of the platform atop the ambulance. With the J–3’s wheels properly positioned on the platform, there was only about eight inches of space left on either side of the main gear.

The landing would be complete when the main gear rolled into wheel wells in the platform.

The finishing touch was for the ambulance-and-airplane combo “to get stopped together,” followed by triumphantly taxiing off the runway in front of delighted spectators.

Tucker, who noted that another reason to tackle the feat was to share his rich aviation heritage with his children, now ages 4 and 6, plans to incorporate the performance into his airshow act, which also includes a “dead-stick aerobatic routine.”

He has his sights set on a possible debut for the ambulance landing at a performance in San Luis Obispo, California, in October, he said. 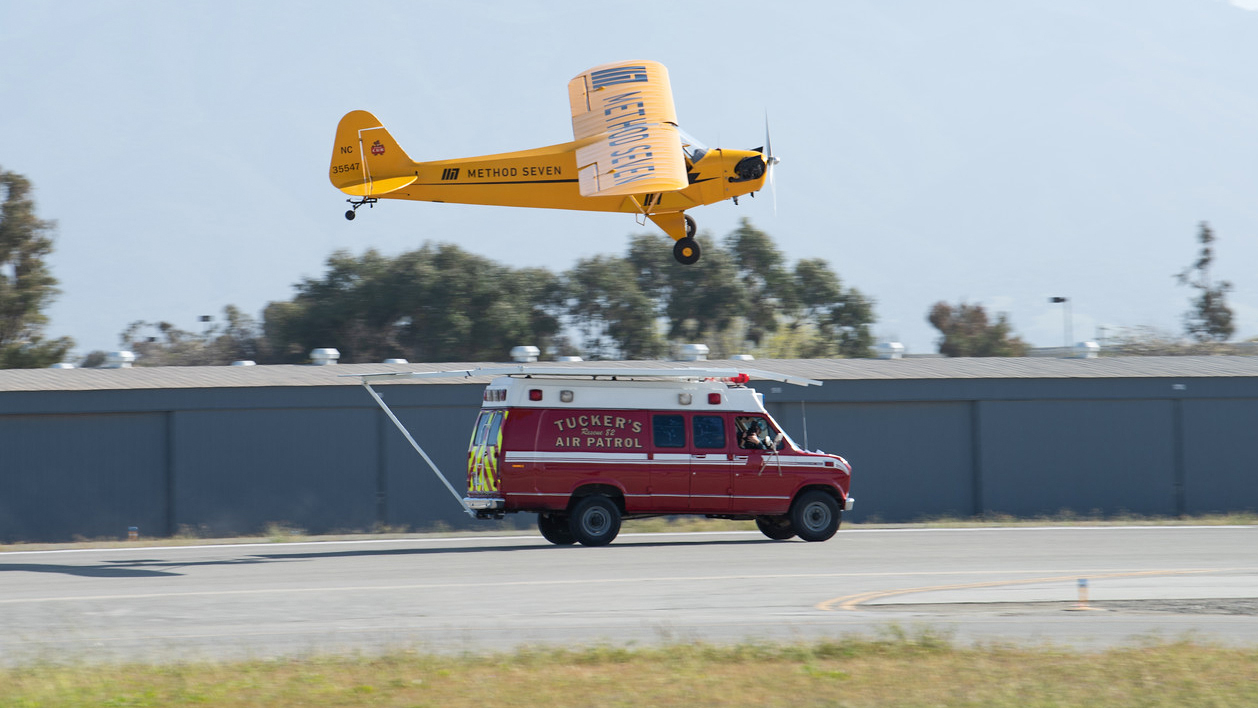