Get the app Get the app
News & Media Technique: A better return policy

Maximize your advantages on departure

Even if glider pilots wear those funny Gilligan’s Island sailor hats and speak in odd languages, we can learn from them. On the day that a good engine goes bad, any pilot can become a glider pilot. 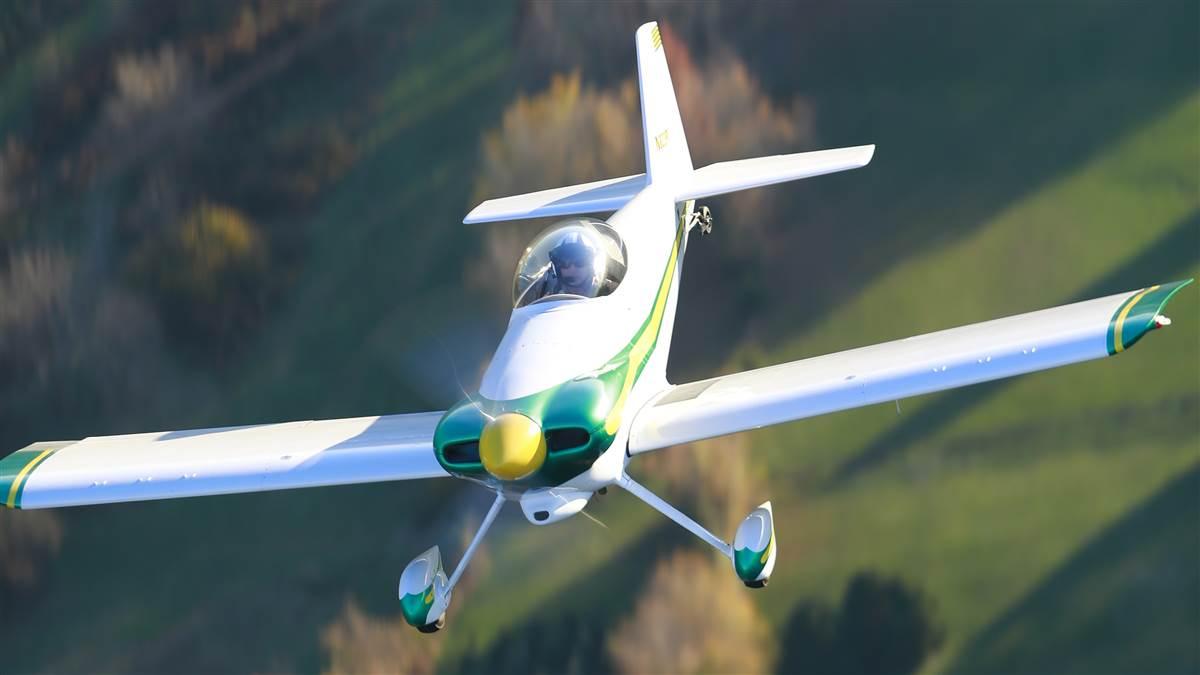 Photography by Chris Rose
According to the Airplane Flying Handbook, the downwind leg is flown one-half to one mile out from the landing runway.

The possibility of an engine failure becomes a little less intimidating if we develop good habits. I am going to flout conventional departure wisdom by suggesting that we no longer fly the extended runway centerline after takeoff. And I will go one step further by offering a significantly safer strategy that starts immediately after liftoff and tracks a straight path away from the runway. So put on your sailor hats and get ready to go down the rabbit hole, because that is where the safest departure profile is found.

Before we begin, I’d like for you to remember two numbers: 300 feet and 500 feet. Three hundred is roughly the amount of altitude you would lose in a light piston single by turning 180 degrees in a sharply banked and steep descent. Five hundred is the diameter of that turn.

Imagine you just took off from a small airport that was surrounded by inhospitable terrain. Imagine further that you are unable to land safely anywhere other than the runway you just departed, and that surface has disappeared under the nose of your aircraft at an altitude of 300 feet. Suddenly the engine stops, and you are demoted to sailplane pilot second class. You might think it was a good idea to turn back to the airfield. But if you did such a foolish thing, the aircraft would run out of altitude and meet the ground 500 feet to one side of the runway.

But what if you had instead intentionally flown about 500 feet downwind of the runway? Now if the engine stopped and you made a 180-degree turn back, the tires of your airframe would be touching down on an insurance-friendly runway. Drifting downwind in a crosswind, that critical turn back to the numbers could be done into the prevailing wind and without the tendency to overbank and cross-control, which a turn from the opposing side of the threshold would promote. (During a crosswind, the required offset is reduced in proportion to the wind velocity because the pilot would be turning into a wind that reduces his or her groundspeed.)

Maybe you don’t like the idea of doing steep turns that close to the ground. Fair enough. But my point is that a best profiled departure depends upon quickly getting to a point from which a safe landing can be made, and then multiplying your advantages from there. One way to increase your chance of survival is to plan on climbing longer than is customary at the best angle of climb airspeed. Flying at best angle will keep you closer to the runway for every foot of altitude gained. 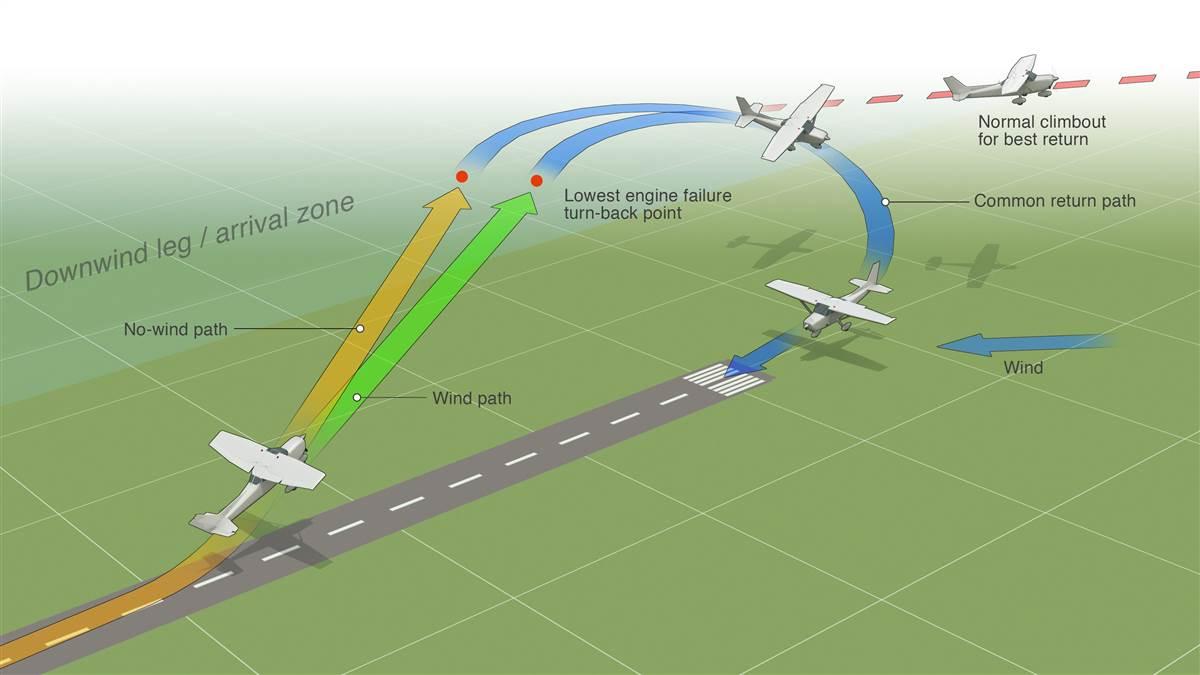 In no-wind conditions, drifting 500 feet (the airplane’s turn radius) will allow a pilot to turn back to the runway in the event of an engine failure, without putting the aircraft in the path of other traffic. With a crosswind, the pilot should use a smaller offset to be able to make the critical turn into the wind. After reaching that initial point, an upwind turn increases the angle of climb and—once on the upwind side of the runway—gives any return a tailwind if the engine fails farther out.

This strategy keeps the airport within glide range longer. Upon reaching that turn-back point, turning into the wind to continue the climb leverages all the good things that keep the aircraft flying. Steeply banked turns eat up altitude. Changing course to a somewhat upwind heading upon arriving at your initial point reduces the arc length necessary to save yourself. Another great advantage is that the turn will soon put the aircraft on the upwind side of the runway, giving any return a tailwind.

But what if you had instead intentionally flown about 500 feet downwind of the runway? Now if the engine stopped and you made a 180-degree turn back, the tires of your airframe would be touching down on a runway.The more that you pivot into the wind, the more this benefit multiplies. Turning upwind slows your movement away from the runway during a critical time in the flight profile, but you will have to balance these performance advantages with the necessity of maintaining a good return position. The less you have to maneuver the aircraft, the longer you can stretch your glide. And flying into a headwind also increases your climb angle. It is a wonderful way to add safety treats to a better planned cookie jar.

How do I know this works? I ran mathematical models that pitted the traditional centerline departure, with its normal two-segment climb, against profiles with longer best-angle climbs and tracks that initially took the aircraft away from the runway in both directions, upwind and downwind. I used different conditions of wind, without considering the takeoff roll, so that only the effects of flight were fairly compared. In each and every case, the normal departure was found to be lacking. It seems the traditional profile and traffic pattern are less than optimal.

And how did my colleagues react to this revelation? The word genius was bandied about. One pilot and theoretician wondered what took me so long. Others saw the light after some arm twisting, and a couple more called me crazy. It wasn’t hard for experienced pilots to accept that it is better to maintain the best angle of climb longer. But the thought of intentionally displacing an aircraft downwind on departure nearly caused one guy an aircraft-spacing aneurism. I had a hard time with that objection because the worst-case scenario still provided more aircraft separation between arrivals and departures than is guaranteed by the current cruising altitudes for direction of flight. But the aircraft separation issue was a minor controversy compared to the sin-eating that followed.

According to a small minority, it is blasphemous to give pilots more options during the first minute of flight. The decision to proceed straight ahead after an engine failure on takeoff is written on stone tablets. Pardon me for not shaking in my boots because this procedure differs a bit from what we might expect to see on any given day at the airfield. An initial climbout that is only slightly downwind and well below pattern altitude will not cause a rip in the space-time continuum. And what normal person, when faced with drowning, throws away a life preserver? Translation for my surfer pilot friends: Normal traffic patterns have bad karma, dude!AOPA

John Carroll is a former commuter airline captain, a banner/glider tow and ferry pilot, and had a short career as an airshow performer.