Get the app Get the app
Already a member? Please login below for an enhanced experience. Not a member? Join today
News & Media Technique: Learn to turn

Antidote to loss of control

“Pilots, as a group, simply don’t know how to turn.” So wrote Wolfgang Langewiesche in Stick and Rudder. The year: 1944. The context: Most fatal accidents resulted from a loss of control while turning. 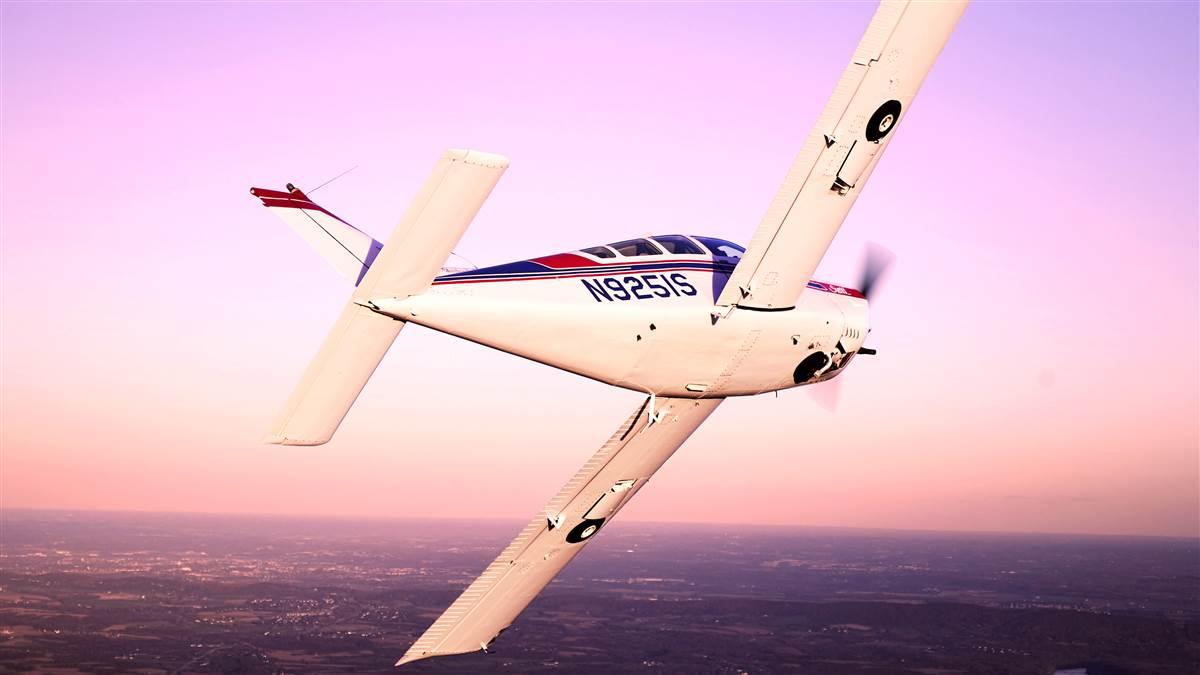 One in four pilots, of the close to 900 I’ve surveyed, believe the rudder turns an airplane. Others might inadvertently misapply the rudder during turns when distracted or stressed. Given this, is it any wonder airplanes continue to skid into spins while in the traffic pattern? What if systemic errors and omissions committed during flight training have been contributing to these accidents? What if we can reduce in-flight loss of control simply by improving the way we teach turns? And what exactly does “turn” mean?

“Turning” and “maneuvering” describe the same thing: curving flight paths. Turns have certain distinguishing characteristics, as well. First, a turning airplane orbits at some distance around some point. Second, it sweeps an arc at some rate. Third, it experiences some acceleration. Again, these attributes are independent of the airplane’s attitude.

Mention “turn,” and pilots invariably zero in on the level turn. But we routinely perform climbing and descending turns, too. FAA training handbooks present a catalog of turns whose names connote specific techniques and objectives: S-turns across a road, lazy 8s, steep turns, and spirals are a few.

Questions like these lead to an inescapable conclusion: Turns are within the purview of the elevator.How do we evolve flight training beyond the rote recital of “horizontal component of lift” to the ability to correlate one type of turn with other types of turns? To understand without any doubt the differences between roll, yaw, and pitch, while providing training experiences that reinforce the notion, “If you do this, the airplane does that”?

According to Langewiesche, the problem with our flight training doctrine is that it “usually becomes a theory of building the airplane rather than of flying it.” More recently, Juan Merkt of Embry-Riddle Aeronautical University expanded on this by suggesting that a pilot-centric approach to flight training could “lead to a better understanding of how the airplane works.” By focusing on the top-level consequences of airplane performance first, Merkt believes pilots will “begin to appreciate how these concepts apply to real flight situations.”

Consider Langewiesche again: “Everything that is true of the [horizontal] turn...is true also of the pull-out from the dive, the flare-out from the glide, the pull-up into a loop—in short, of any curving of the flight path upward.” What if we taught turn performance from this perspective? After all, this is how it’s presented to professional airshow pilots, U.S. Navy air combat pilots, and U.S. Air Force test pilots. That is, turning flight can occur in any of the three geometric planes: the horizontal, the oblique, or the vertical. Turns around a point, chandelles, and loops are perfect examples of turns in each geometric plane.

Turn performance naturally segues into practical discussions about angle of attack, G-load, design limits, and approved maneuvers, too. For example, merely showing a student how 60 degrees of bank and 2 Gs puts you on the curve of a typical bank angle versus G-load diagram is an educational opportunity missed. How are bank angle and G-load controlled, and by whom? What does that exponential curve represent, and what happens if you’re not on it?

Does stall speed really increase with bank angle, or is G-load the key? Why not introduce design limits by superimposing them here? How can bank-angle-versus-G-load concepts be translated into insightful training experiences? Additionally, what is the connection between bank angle versus G-load and the speed versus G-load (V-G) diagram?

Ah, the V-G diagram—where aerodynamic, structural, and speed limits define our maneuvering envelope. What key V-speeds can be shown here? How does the aerodynamic limit change with airplane weight? What does maneuvering speed mean? Is it possible to fly slower than the 1-G stall speed without stalling? How do flaps or a rolling pullout affect design limits? Can you illustrate accelerated stalls here? How about a loop? What can be gleaned about the relationship between airspeed and G-load trends? And which control surface determines whether or not we cause the airflow to separate from the wing, or the wing to separate from the airplane?

Probing questions like these lead to an inescapable conclusion: Turns are within the purview of the elevator. Sure, we might use aileron and rudder to influence our maneuvers, but the elevator is critical to the proper management of straight and curving flight paths. Reading deeply, this concept even appears in the FAA’s Airplane Flying Handbook. 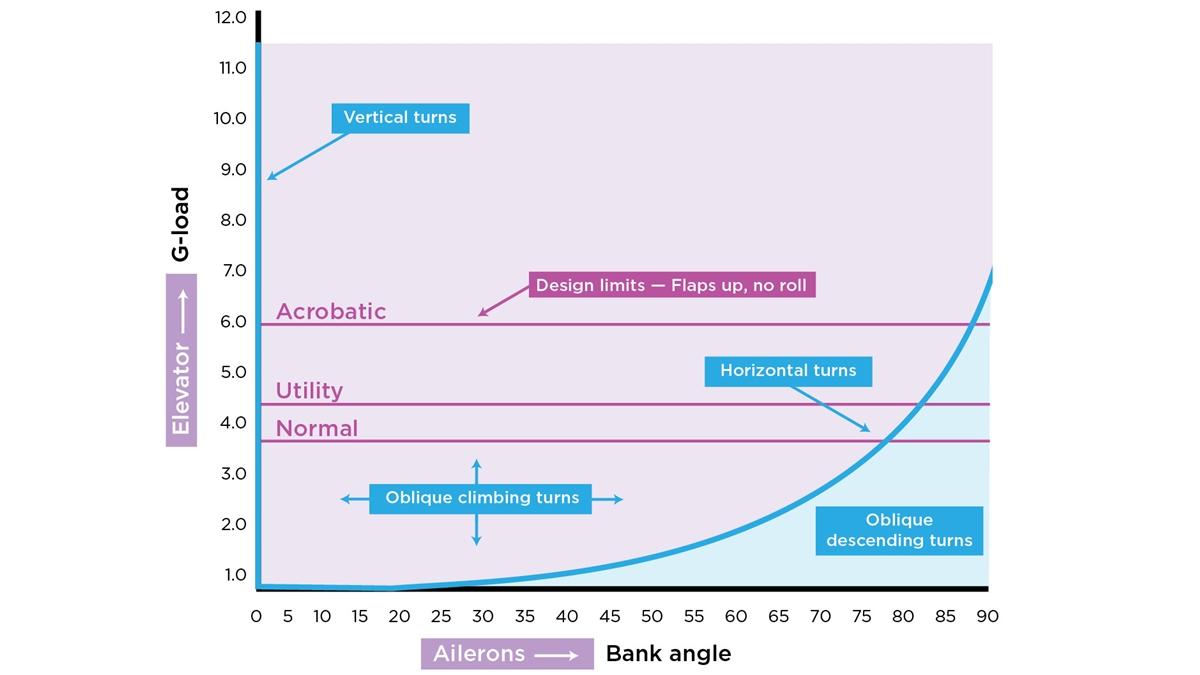 The bank-versus-G-load diagram found in the Pilot’s Handbook of Aeronautical Knowledge shows only data for a level turn. This enhanced diagram shows climbing and descending turns, and where normal, utility, and acrobatic design limits fall on the curve.

Level turns: “The elevator...‘pulls’ the nose of the airplane around the turn.” Chandelles: “a climbing turn should be started by smoothly applying back-elevator pressure.” Eights-on-pylons: “emphasize that the elevators are the primary control for holding the pylons.”

On your next flight, try this experiment: Establish a coordinated turn at a comfortable and constant angle of bank. Using sufficient elevator, “pull” the nose of the airplane along the horizon. Apply more aft elevator and watch your level turn become a climbing turn. Release aft elevator and start a descending turn. Reapply enough aft elevator to resume the level turn.

For a more advanced exercise, take along an instructor who understands turn dynamics. Start with a coordinated, level turn. Smoothly transition into a slipping turn while holding the bank angle constant. Notice how the turn rate slows, the nose appears to lag behind the turn, and the rudder is deflected opposite to the turn. Clearly, rudder is not turning the airplane. Then slowly transition into a skidded turn, while continuing to maintain the same angle of bank. Observe how the turn rate increases, the nose appears to move ahead of the turn, and the ailerons are deflected opposite to the turn. Clearly ailerons cannot be turning the airplane. While certain situations might warrant use of a slipping turn, there is no practical application for a skidded turn other than to flirt with a spin.

Greater awareness about the function of each of the controls and the consequences associated with their use advances us to the correlation level of learning. It also opens up a whole new way of thinking about maneuvering an airplane in three dimensions. More important, learning to turn just might be the antidote to reducing loss-of-control accidents.AOPA

An aviation educator for 30 years, Master Instructor Rich Stowell has logged 9,000 hours of flight instruction given, 34,000 spins, and 25,000 landings.