Get the app Get the app
AOPA will be closed on Friday, July 3, 2020, in observance of Independence Day.
Already a member? Please login below for an enhanced experience. Not a member? Join today
News & Videos Garmin GDL 51, 52 connect easily to ForeFlight

Editor's note: This article was updated Dec. 20 with additional information about SiriusXM Aviation trial offers with the GDL 51 and 52.

Garmin, SiriusXM Aviation, and ForeFlight have been working together to create an easy way for pilots to access weather and traffic information on their mobile devices in flight. 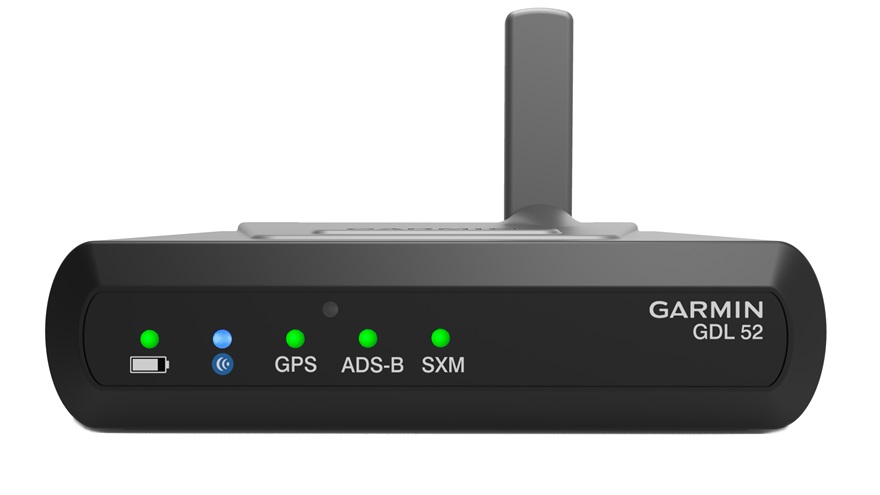 Garmin's GDL 52 receiver is available in both the portable version shown here, and a remote mount version. Garmin photo.

Garmin’s portable GDL 51 and 52, launched in July 2017, are small—4.9 inches wide by 1.3 inches tall by 3.4 inches deep—and weigh less than a pound. They can stow nicely in a flight bag and don’t take up much room when sitting on top of the instrument panel.

The GDL 51 is a SiriusXM receiver, so a subscription is required to pull weather information into ForeFlight, Garmin Pilot, or other Garmin portable devices. I tested the GDL 51 on a flight from Florida to Maryland in my Cessna 170B at the end of October. The skies were perfectly clear, so I didn’t use the NEXRAD imagery, but the time-stamped METAR information proved useful. I like to check the winds at my planned destination to see if they remain as forecast or if they have changed in direction or velocity so that I can find an alternate with more favorable winds. The GDL 51 does not provide traffic data.

I used the GDL 52 during a flight in the Cessna 170 from Maryland to Tennessee over the Thanksgiving holiday.

I had planned a southerly route to Tennessee to have more favorable surface winds, which I kept an eye on with the GDL 52. The southerly route also kept the flight in clear skies. Marginal VFR ceilings over the mountains just north of the route matched what was shown on ForeFlight’s flight category overlay. Up-to-date winds aloft information made altitude planning en route easy as I crossed mountains and then descended over lower terrain.

Traffic information is helpful, as long as ForeFlight’s “hide distant traffic” function is enabled so that your screen isn’t covered by black targets (airliners) that are tens of thousands of feet above you.

The flight to Tennessee took six hours, and the GDL 52 lasted about five hours, matching the battery operating time listed on Garmin’s website. A warning pops up on the ForeFlight screen when the unit’s battery is down to 20 percent. It wasn’t a problem to continue without the GDL 52 because I was in VFR conditions, with no weather between me and my destination near Nashville. However, had I been deviating around weather, I would have needed to plan in advance to alternate charging the GDL 52 and my iPad Mini 4 in my Cessna 170’s one power port.

Both units provided a level of luxury in the Cessna 170 that I’m not used to. Being able to check weather changes while en route, plan alternatives, and spot traffic (with the GDL 52) provides more time to make decisions and alter plans as needed. After flying with the units, particularly on long routes, it’s hard to go back to a cockpit without that information.