Get the app Get the app
Get the latest news on coronavirus impacts on general aviation, including what AOPA is doing to protect GA, event cancellations, advice for pilots to protect themselves, and more. Read More
Already a member? Please login below for an enhanced experience. Not a member? Join today
News & Videos What Went Wrong? Just a short flight

Editor's note: This article was updated March 20, 2019, with the release of the National Transportation Safety Board's probable cause of the the 2017 fatal crash of a Learjet 35A near Teterboro, New Jersey.

The National Transportation Safety Board on March 12, 2019, cited pilot error as the probable cause in the 2017 fatal crash of a Learjet 35A that was circling to land at Teterboro Airport in New Jersey. AOPA Air Safety Institute Executive Director Richard McSpadden provided an analysis of the accident. 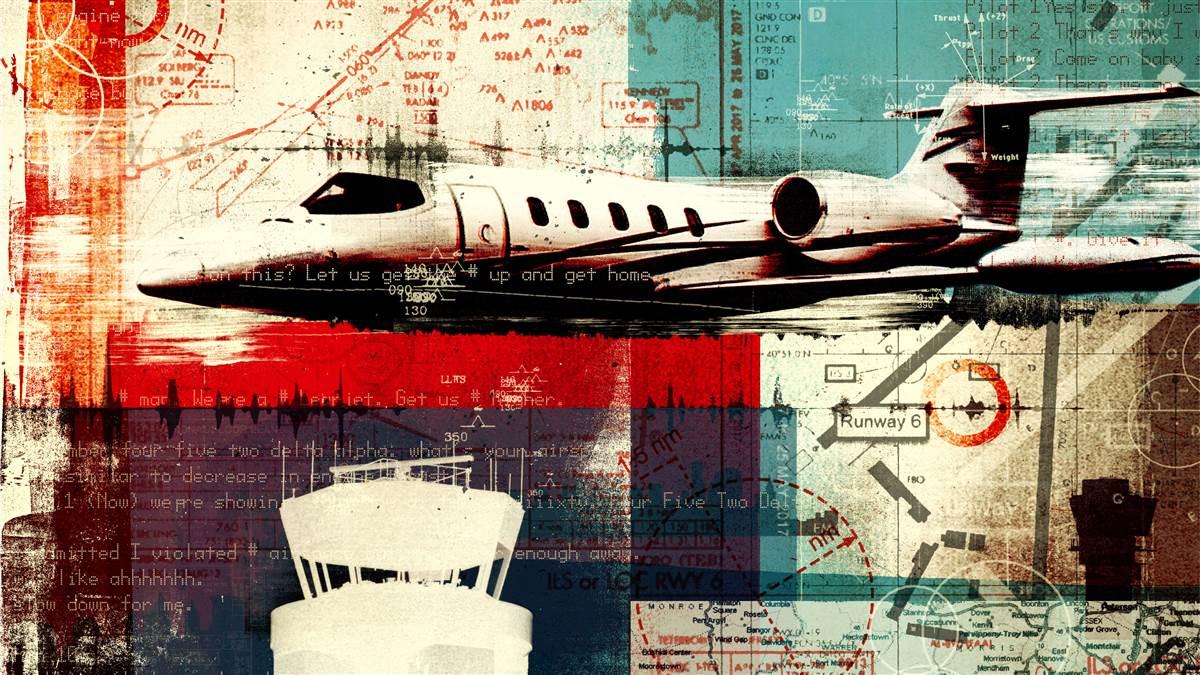 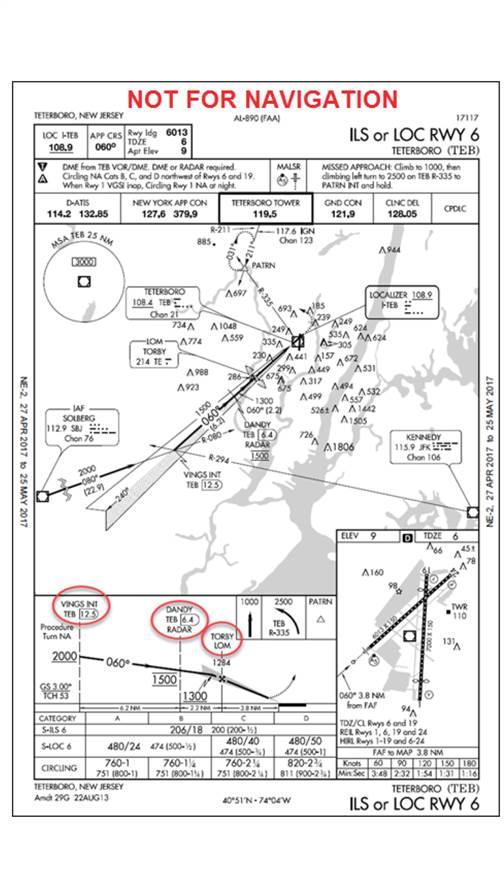 Earlier this year, the National Transportation Safety Board released disturbing transcripts from the May 2017 cockpit audio of a Learjet that crashed at Teterboro Airport in New Jersey while circling to land in visual conditions. The transcripts reveal dysfunctional cockpit operations between an experienced captain and an inexperienced first officer flying a demanding airplane in one of the most intense airspace regions in the world. Their tragedy and the NTSB’s reports provide sobering awareness of the importance of a focused cockpit; how quickly situational awareness can erode; and the devastating consequences when it does.

General aviation jet aircraft are mostly used in professional flying operations, flown by well-trained, full-time pilots operating under detailed and standardized procedures. Such a cockpit in operation is impressive to watch, like a well-rehearsed production: The pilot and co-pilot read and respond to checklists, anticipate each other’s needs, and build and share situational awareness about themselves, the airplane, and their surroundings. That’s how fast-moving, complex airplanes can be flown millions of hours each year with an impressive safety record. Accidents in turbine aircraft are rare in GA, occurring at less than half the rate of overall GA accidents.

Turbine aircraft accidents typically involve a rapid reduction of situational awareness, exacerbated by the speed and complexity of the aircraft involved. Often the degradation in situational awareness—a critical link in the accident chain—is permitted by a nonchalance that eventually becomes insurmountable. Sadly, the May 2017 Learjet accident reflects just such a pattern.

The NTSB hasn’t issued a final report on the probable causes, but the facts of the accident are clear. It’s evident the cockpit culture that day and the resulting loss of situational awareness were contributing factors.

This was the crew’s third flight of the day. The Learjet 35A’s captain filed an IFR flight plan for a 28-minute flight from Philadelphia International Airport (PHL) in Pennsylvania, to Teterboro (TEB) at a cruising altitude of Flight Level 270 (27,000 feet) and a cruise speed of 441 knots. The Learjet, operated by Trans-Pacific Jets, was flying under FAR Part 91 as a positioning flight with no passengers aboard. The Lear was cleared for takeoff shortly after 3 p.m. Visual meteorological conditions prevailed along the route of flight.

The national radar summary chart indicated no significant weather echoes over the flight route. A defined 100-knot jet stream was moving southeastward across western New York, Pennsylvania, southern New Jersey, and through eastern Maryland and Delaware during the period. Surface winds at the destination were strong and gusty.

The airplane banked hard to the right and a tower controller recalled he could see the Learjet's belly with the wings almost perpendicular to the ground. The Learjet’s climb was capped at an initial altitude of 4,000 feet msl. About 10 minutes after departure, the crew checked in with New York Approach. The approach controller kept the Lear at 4,000 feet and provided vectors for the Teterboro ILS Runway 6 approach, circle to Runway 1. Shortly thereafter, the controller cleared the Learjet to descend to 3,000 feet. About four minutes later, the crew was reminded to intercept the localizer. The pilots, confused about airport position, did not proceed as expected. The controller issued new instructions to fly to VINGS, a localizer waypoint 12.5 miles from Teterboro’s Runway 6. The Learjet was cleared for the ILS Runway 6 approach, circle to Runway 1, about eight miles out from VINGS.

At 3:26 p.m., the approach controller instructed the crew to contact Teterboro Tower; he issued a 1,500-foot crossing instruction at DANDY (6.4 miles from TEB Runway 6) and to circle at TORBY, the final approach fix located 3.8 miles from Runway 6. About two minutes later, and approximately four miles from the airport, approach again instructed the Learjet crew to contact the tower. With contact established, Teterboro Tower cleared the Learjet to land on Runway 1 and provided surface weather conditions: winds 320 degrees at 16 knots, gusting to 32 knots. One minute later, the tower asked, “You gonna start that turn?” The crew confirmed it was and immediately initiated a turn.

The Learjet’s radar track showed the flight starting a right circling turn less than one mile from the approach end of Runway 6. The airplane banked hard to the right, and a tower controller recalled he could see the Learjet’s belly with the wings almost perpendicular to the ground. As the airplane appeared to level out, the left wing dropped, showing the Learjet’s top. Security video cameras at nearby buildings captured the last moments showing the Learjet at high angles of bank; one camera captured the jet in a steep, right-wing-low, nose-down attitude at impact. 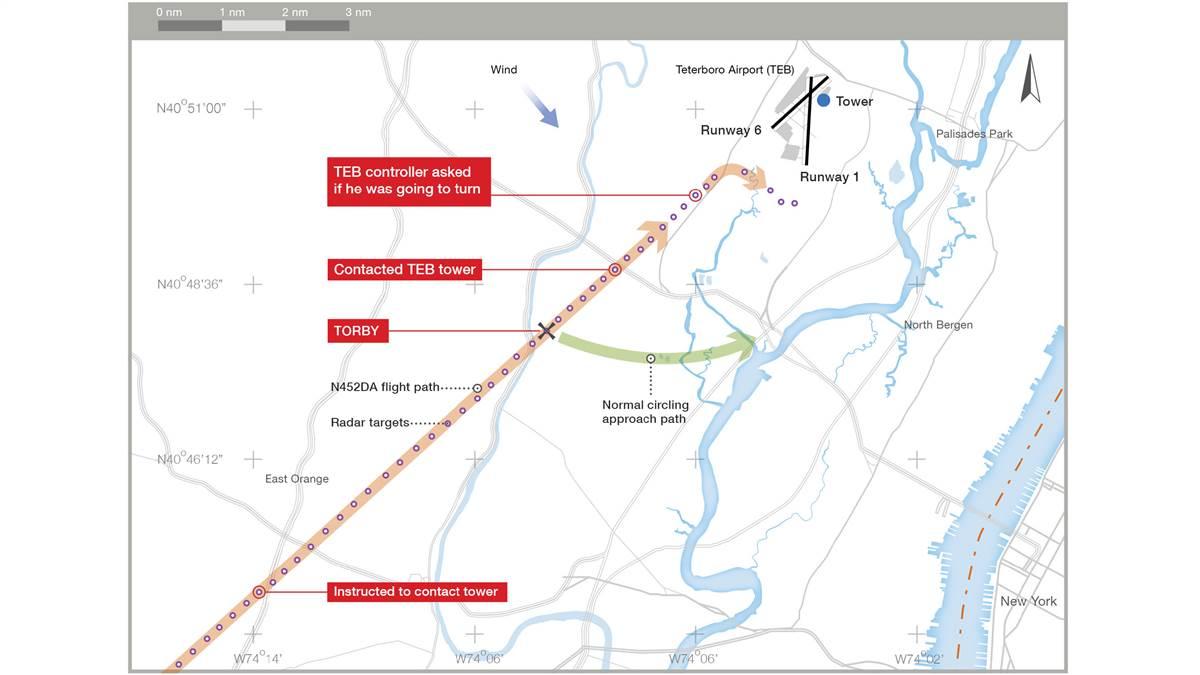 The crew did not start the turn until the tower controller reminded them to turn, nearly three miles beyond the normal circling point. They turned from a crosswind of 16 knots gusting to 32 knots to a direct tailwind.
Illustration by Charles Floyd

The transcript of cockpit communication reveals a coarse cockpit with a co-pilot striving to learn the airplane and impress a seasoned captain. While most crew cockpits aren’t church sanctuaries, they are professional and focused. This cockpit was quite different. The level and occurrence of profanity is striking, and distracting. Complaints that they haven’t received a higher altitude, when ATC points out they’ve exceeded airspeed limitations, and when they discover they’re closer to Tetorboro than they realized are riddled with expletives. The cockpit voice recorder transcript cites 131 expletives in the 30-minute flight.

The cockpit conversation hints at a contemptuous atmosphere, disrespectful of outside authority and dismissive of rules. In fact, the co-pilot, who flew most of the flight until moments before the crash, was rated 0 on a Trans-Pacific rating scale from 0-4. Such a rating prevented the co-pilot from flying the airplane under any circumstances. Disregarding company policies, the captain gave the leg to an unqualified co-pilot in one of the busiest airspace sectors in the nation.

At no point in the flight was the crew practicing procedures and standards that lead to shared situational awareness. The CVR recorded no pretakeoff briefing, no clear description of the duties each would assume during the flight and upon arrival, and no approach briefing. These are compulsory in professional flying environments.

En route, on multiple occasions, the crew exceeded speed limitations. In the busy airspace they were kept lower than preferred, and when the controller explained her rationale for the lower altitude, they cursed her on intercom, exclaiming, “It’s like she doesn’t like us.”

The co-pilot, who flew most of the flight, was rated 0 on a Trans-Pacific rating scale from 0-4. Such a rating prevented the co-pilot from flying the airplane under any circumstances.They became so distracted by what they perceived as a lack of respect for them and their Learjet that it began to have an impact on their situational awareness, and they began to get behind the airplane. The degrading situational awareness and advancing task saturation resulted in numerous missed radio calls from controllers. At one point the co-pilot aligned with Newark airport, mistaking it for Teterboro. It took several minutes for the crew to comprehend why the localizer for Teterboro Runway 6 was not aligning with their visual picture. But by then, the tracon had to issue them a modified clearance.

Throughout the flight, external radio traffic was busy, and rapid, as is common in New York’s Class B airspace. Even with the captain providing frequent coaching on airspeed and heading checks, the co-pilot’s skills were overwhelmed. Uncoordinated actions between the crew created confusion in responsibilities, in one case causing a late localizer intercept, as neither pilot realized the autopilot remained in the wrong mode. Task saturation continued to build, and situational awareness kept eroding in a high-workload airplane, in strong turbulence, during one of the most challenging airport arrivals in the National Airspace System.

During the approach, the co-pilot attempted—more than once—to start down the ILS before capturing the glideslope, with the captain correcting the error.

Fixated on speed and altitude controls, confused by the alignment of the runway and localizer guidance, frustrated by missed radio calls, and annoyed by turbulence, the crew—and importantly, the captain—got well behind the airplane. Two miles beyond the normal circling point, the tower reminded them to start the circle. Surprised, perhaps embarrassed, they immediately began a turn—and they may not have anticipated the effect on groundspeed when they turned from a crosswind of 16, gusting to 32, to a direct tailwind. The high-bank turn, initiated late, likely with above-normal G onset probably contributed to a loss of control and ground impact.

The Teterboro tragedy offers several sobering lessons. The crew’s freewheeling cockpit overlooked procedures and company policy designed to provide safeguards that could have helped them retain situational awareness. It’s likely this attitude was fortified by the nature of the flight: a repositioning run, third flight of the day, and without passengers. It must have felt like a relaxed mission compared to their two previous flights that day. The level and extent of profanity in the cockpit—much of it aimed at others outside the cockpit—indicates a lack of professionalism that perhaps further contributed to an undisciplined cockpit.

Additionally, the captain’s decision to permit an unqualified co-pilot to fly a quick, intense leg into one of the most demanding regions of the country clearly contributed to the accident. Allowing the co-pilot to fly any leg was a breach of company policy. Allowing him to fly this leg indicates the captain underestimated the complexity of the operation.

The art of good instruction is letting students go far enough to see the consequences of their mistakes and their shortcomings, without going so far that safety of flight is endangered. This flight is a reminder to all instructors and captains of how quickly things can deteriorate; you cannot allow a student to continue when you, the instructor, begin losing situational awareness and getting behind the airplane. You must take control until your task saturation subsides and you regain control of the environment.

Finally, it’s helpful to realize when things aren’t going your way and you’re just not on your game. Use a rule of three. If you notice three mental mistakes—missed radio calls, missed speed restrictions, lining up on the wrong airport—step back and rethink your operations. If on the ground, you may cancel the mission and pause to regain focus. In the air, work to get to an environment where you can regain control. Get into clear air, stay for a turn in holding, request extended vectors. Take action to regain control and mental acuity.

While we wait for the NTSB to determine a probable cause, we can reflect on this accident and the lessons it provides to better understand the importance of a focused cockpit, how quickly situational awareness can erode, and the dangerous consequences when it does. Such reflection may help us identify unwelcome traits that could spill over into our flying—traits that we must squash quickly so we can provide a safe flight environment for our crew, our passengers, and ourselves. 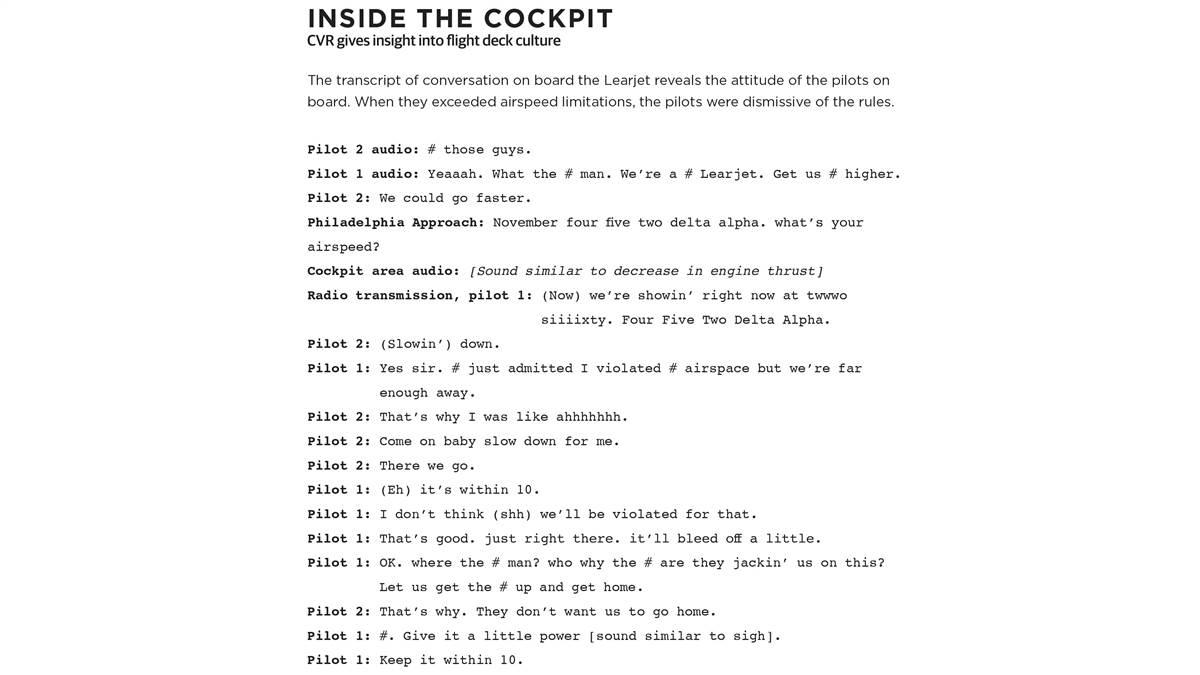