Get the app Get the app
Already a member? Please login below for an enhanced experience. Not a member? Join today
News & Videos The fix-it flight school

When you enter the sky-blue building that looks out onto Runway 16/34 at Merrill Field in Anchorage, a sign directs you: “Welcome! We’re upstairs.” Climb the staircase to the waiting area and you will be directed to take off your shoes—particularly if it’s winter—so you don’t track mud and snow around the small office. 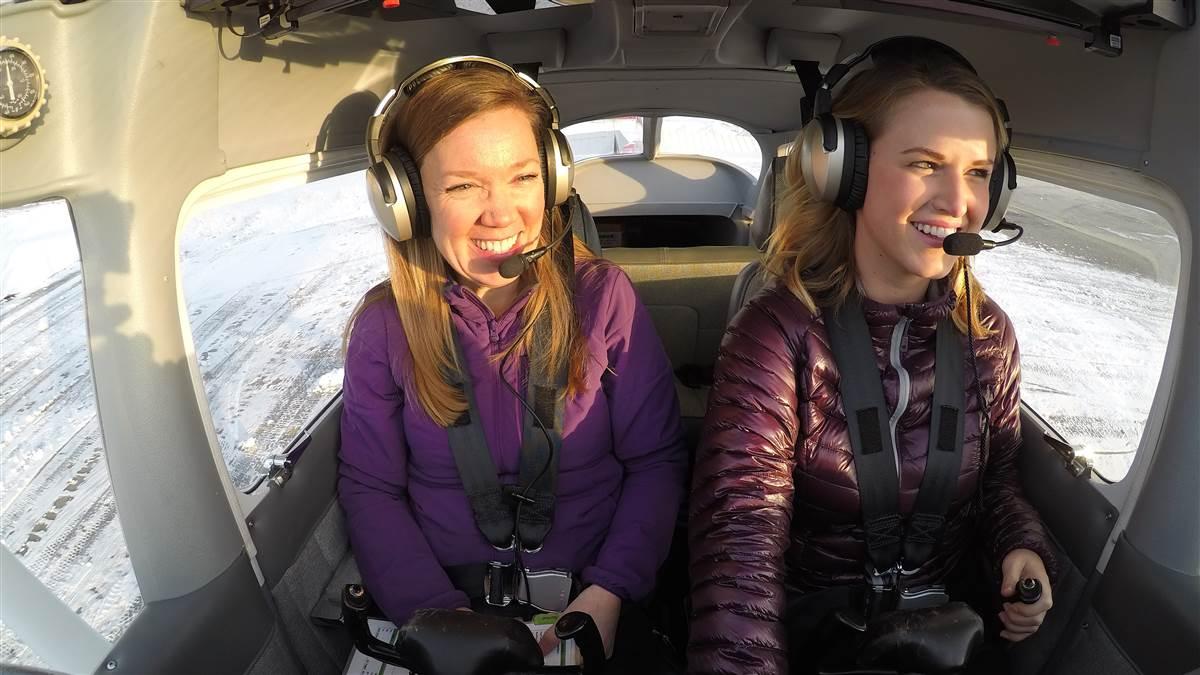 A fireplace and a flush toilet

When SkyTrek Alaska opened in 2014, it was the first flight school with a flush toilet on Merrill Field in Anchorage. That immediately set it apart from a competing flight school. The competitor eventually got a portable toilet after tower controllers complained that they were tired of seeing the school’s students urinating outside.

SkyTrek Alaska’s facility is both cozy and utilitarian. A wood-burning fireplace warms the classroom where owner Jamie Patterson-Simes conducts ground school and pre- and postflight briefings. She uses white-topped tables rather than white boards to draw diagrams, and keeps plenty of visual aids on hand. A kitchen is stocked with water, energy bars, fruit, and tea bags.

The 1957 building is a remnant of Alaska aviation history. The first-floor hallway contains long-ago scribbled four-digit phone numbers for Alaska Airlines and the local flight service station. The building’s former tenant, an 82-year-old nicknamed Frosty, kept a Piper Cub and window-washing equipment in the hangar.

“Nobody had been in the building in 25 years,” Patterson-Simes said. When the airport manager took her to see it, they discovered trash, dead animals, and rotted floors. The window overlooking Runway 16/34 was black with grime.

Patterson-Simes wiped a circle in the grime, looked outside at the Chugach mountain range, and told the airport manager, “I’ll take it.” —JWT 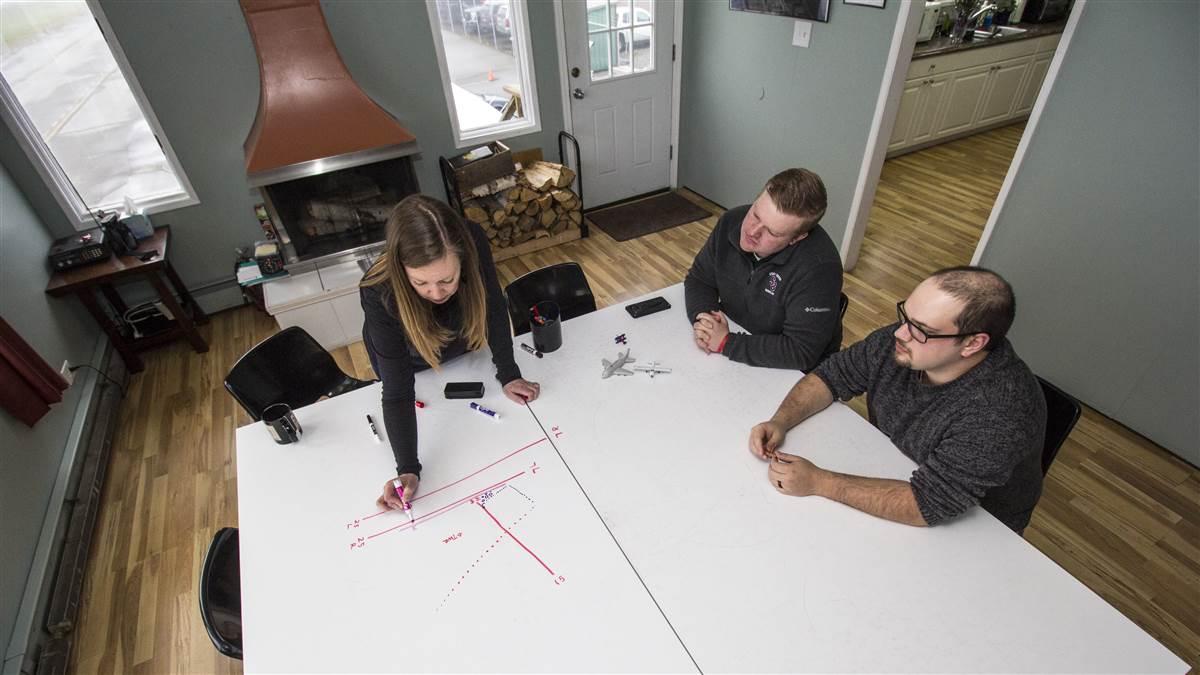 You’ve found SkyTrek Alaska Flight Training. And you’re most likely not here by accident. SkyTrek Alaska doesn’t cater to people wandering in off the street. It doesn’t advertise. Its business is primarily word-of-mouth—and its waiting list is three months long.

Not the biggest, just the best

With just two airplanes—a Cessna 150 and a Cessna 172—one full-time flight instructor, an assistant, and two part-time CFIs, SkyTrek Alaska proves that a flight school doesn’t have to be big to be the best.

The Part 61 school emphasizes the fundamentals—stick-and-rudder skills, analog “steam gauge” instruments. (There’s not a big demand for the digital screens of glass cockpits in Alaska.)

Students who begin their flight training odyssey at SkyTrek train with one instructor and generally take the checkride at 40 or 41 hours. They do everything—preflight, talk on the radio, and most of a landing—from the very first lesson. They calculate weight and balance and density altitude for every flight, using a worksheet that Patterson-Simes designed. She believes students should be held to high standards. She schedules three-hour lessons so that she can devote more time to pre- and postflight briefings.

“If you start off low, you’ve already failed as an instructor,” she said. “I have to sit next to them and watch them struggle. But once they get it, I don’t have to worry about it.”

Students who come to SkyTrek after initially training elsewhere soon learn what they’ve missed. Riley O’Connor, who earned his private pilot certificate in October 2017, was a refugee from a pilot mill—a flight school whose priority is to churn out pilots as quickly as possible, sometimes to the detriment of their knowledge base. He had logged 45 hours but hadn’t soloed, nor had he ever been shown how to file a flight plan.

“She’s been through the wringer so many times,” O’Connor said of Patterson-Simes. “She’s able to pound it into you the right way.” He said Patterson-Simes employs many different teaching methods to help students overcome learning plateaus.

“I had a hard time learning to fly, so I can completely empathize with people who have had difficulty,” said Patterson-Simes, who graduated from Embry-Riddle Aeronautical University in Prescott, Arizona. “I’m nice. I’m not a jerk. I’ll give ’em a hug and say, ‘You can do this.’”

“You can see the joy on her face when they figure out a maneuver,” said Brendan Doyle, a new private pilot.

SkyTrek Alaska clients say Patterson-Simes cares deeply about her customers, often acting as a surrogate mom or career counselor for the younger ones who know they want to be professional pilots but aren’t quite sure how to get there.

The parents of her younger clients seek her out. “Jamie’s the only instructor I would trust with my child’s life,” said Sven Lincke, president of the Alaska Airmen Association. His daughter, Anya, is a 16-year-old presolo student at SkyTrek Alaska.

So many students, so few CFIs 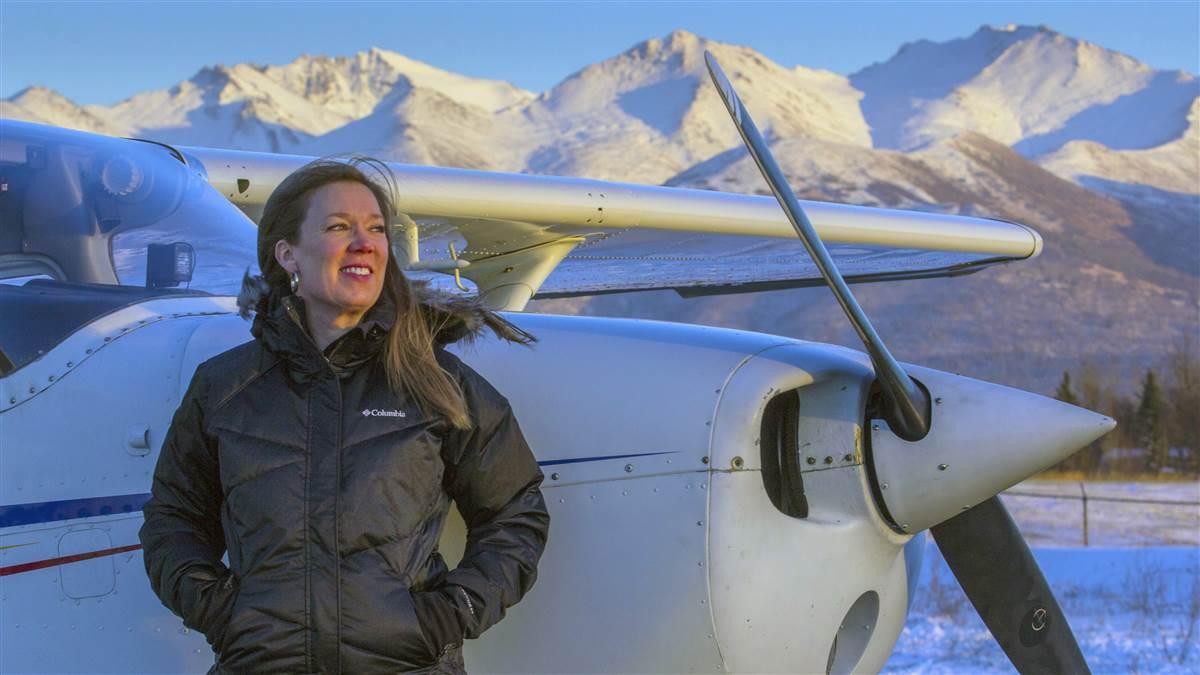 In spite of its success, SkyTrek Alaska deals with the same issue plaguing flight schools across the United States: a lack of CFIs. In Alaska, pilots with a commercial certificate from a Part 141 school and 190 hours can find immediate employment with a Part 135 cargo operator. There’s no need to immediately gain additional ratings and certificates to build hours, so there’s no incentive to teach flying before moving on.

Consequently, even with part-time CFIs, Patterson-Simes puts in long days—particularly between March and September, when Alaska gets more hours of daylight than anywhere else in the United States. She took off one day in April and May 2017, no days in June, and one day in July.

But Patterson-Simes will not hire just anyone. If you’re just racking up the hours on your way to the airlines, you can do that anywhere. But if you’re looking to become a career flight instructor in one of the most challenging locations in the world, you might send her a résumé.