Get the app Get the app
News & Media The common turn

The common turn has been slighted. Because it seems so simple, the turn gets brief coverage in ground school and seldom is discussed in detail. This basic maneuver is worth a closer look, however, to correct the mistakes a sizable portion of the flying public is most likely to make when making turns. 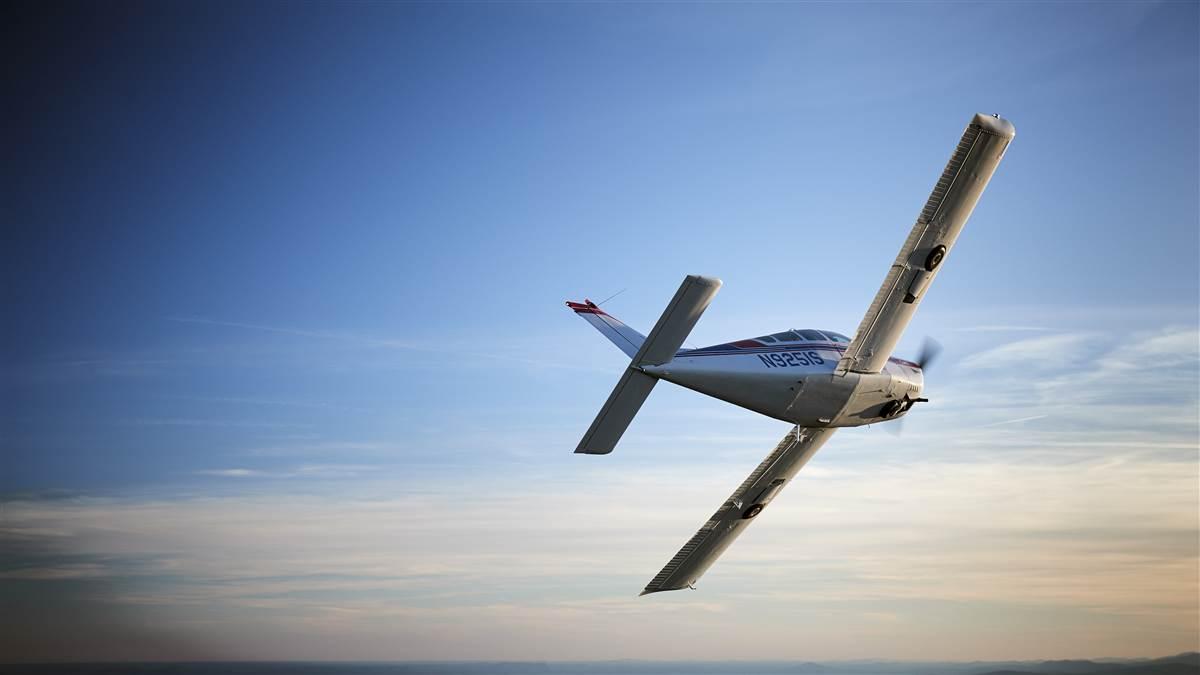 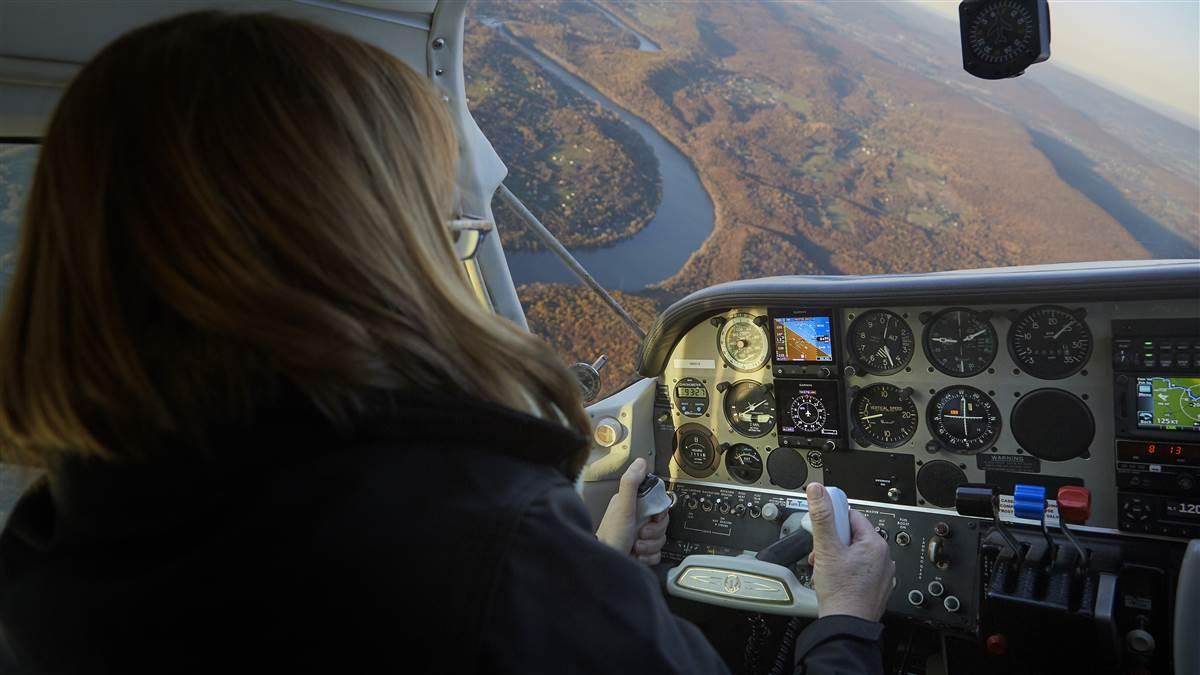 Once established in a turn, neutralize the ailerons and the airplane will continue turning. Back-pressure on the elevator should be maintained, however, to maintain altitude in the turn.

The common turn has been slighted. Because it seems so simple, the turn gets brief coverage in ground school and seldom is discussed in detail. This basic maneuver is worth a closer look, however, to correct the mistakes a sizable portion of the flying public is most likely to make when making turns.

The basis of most turn difficulties is the misunderstanding of the true purpose of the rudder—when and why it is to be used. The two most pervasive habits pilots exhibit are holding rudder and/or aileron through the turn, or not using rudder at all when entering or leaving turns. And then there’s the complexity involved in making climbing and gliding turns where p-factor jumps in to complicate things.

A pilot can fly for a lifetime making uncoordinated, sloppy turns and normally won’t endanger himself or his passengers. However, there’s a right and a wrong way to do everything, and charging around with the skid ball dancing back and forth across the inclinometer while turning is not the right way. Besides, knowing that you’re doing it right is reason enough to work at making your turns into works of art.

To put everything in context, let’s look at the way a wing develops lift. Weight points toward the center of the Earth. Lift generated by the wing counters weight by pushing the aircraft up. As the wing produces lift it incurs a penalty called induced drag.

Now let’s say we lower an aileron, which changes the curve of the wing. That generates more lift, which means the wing with the lowered aileron—the outside one going into a turn—has more lift than the inside wing, so it goes up. However, because it has more lift, it also has more drag than the inside wing. That drag pulls the wing back. This is adverse yaw—yaw in the wrong direction. So, when the ailerons are deflected and the airplane is rolling into a bank, rudder is applied in the direction of the turn to counteract the greater drag on the outside wing.

Rudder is needed only when the lift and drag are imbalanced between right and left. It is no longer needed as soon as the bank is established and the ailerons are neutral. 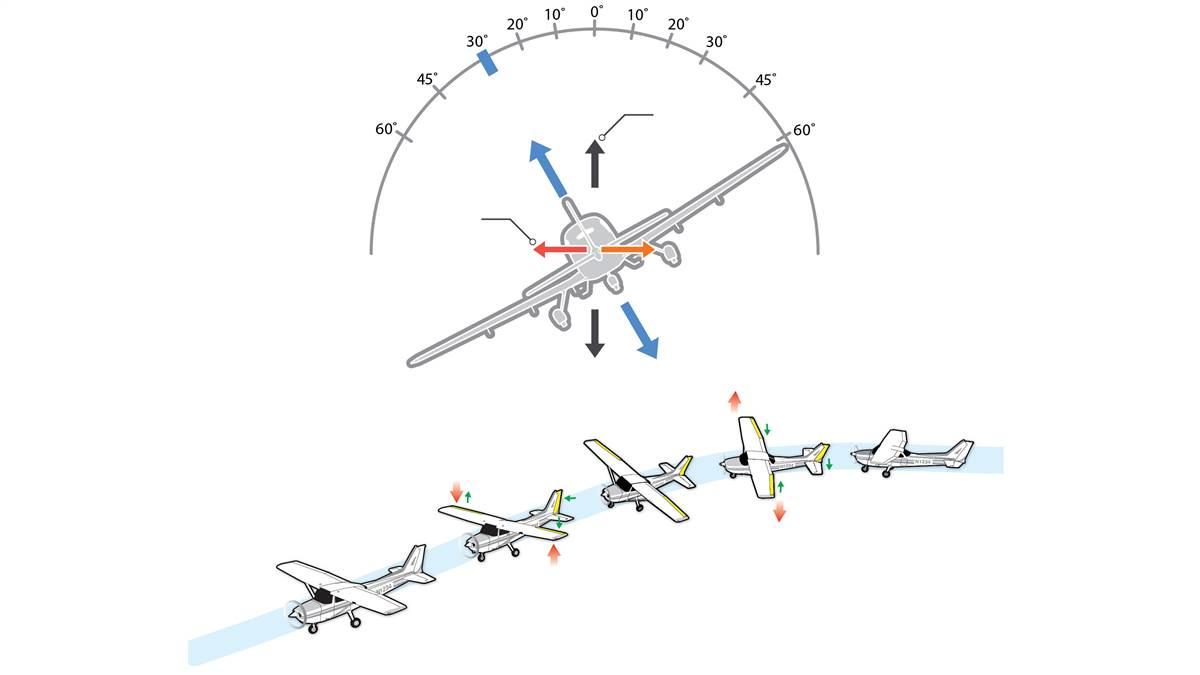 When an airplane is in a bank, its lift vector can be divided into the vertical component lifting up and the horizontal component causing the airplane to turn (at top). Rudder accompanies the aileron deflection that initiates a turn (bottom, green arrows). The ailerons cause an imbalance of lift that moves the wings in the opposite direction of the aileron deflection (bottom, red arrows). Rudder and ailerons are neutralized in an established turn until the pilot rolls out with aileron and rudder (green arrows).

Inside the turn coordinator

When your instructor admonishes you to “step on the ball” in climbs and turns, he or she is referring to the ball in an inclinometer in the airplane’s turn-and-slip indicator or turn coordinator. In coordinated flight, the ball settles at the center of the liquid-filled curved tube (or its digital equivalent). In a slip, it deflects to the inside of a turn. In a skid, it deflects to the outside. Either way, stepping on the ball is a reminder to press the rudder pedal on the same side as the deflection: If it’s deflected to the right, add right rudder, and vice versa. —Sarah Deener 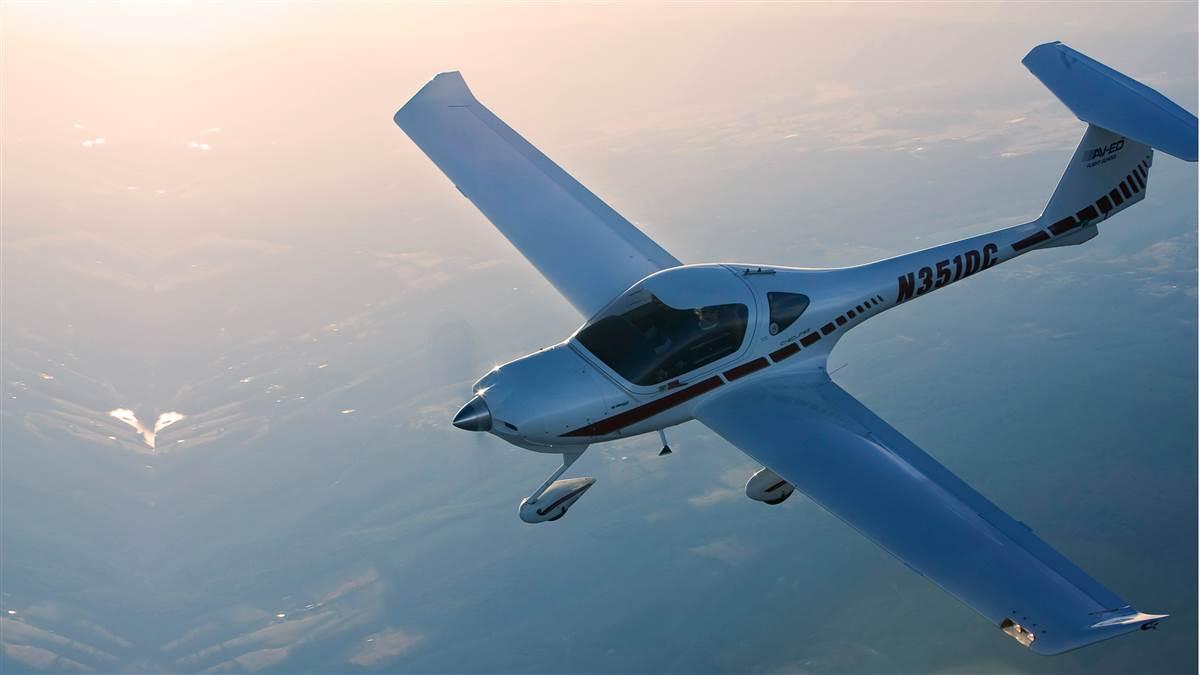 Rolling into the turn—Rolling into a bank to set up a turn isn’t complex. The goal is simply to establish a bank and keep the ball in the middle through the entire process. There are, however, subtleties of technique and aircraft design that offer pilots a number of opportunities to cause themselves problems. They’re minor problems, to be sure, but they are still problems.

Every airplane is different, which means each has a different rudder/aileron mix in both the amount of control deflection needed for a normal turn and the timing used between the rudder and aileron in applying those controls. Some older airplanes have so much adverse yaw that a pilot may need to lead with the rudder, meaning the rudder goes in faster than the aileron. Most airplanes like to have just a little rudder put in at the same rate as the aileron.

The newer the airplane, the more subtle the rudder deflection becomes until it’s more of a pressure than a movement. But, it’s still needed. Even in newer designs, if the aileron is displaced rapidly and almost to the limit, as when fighting gusts in approach, adverse yaw will pull the nose into a slip or skid unless there is rudder involved.

When rolling into the turn, the rudder and aileron should start the process by working together. Often, however, the pilot anticipates the roll-in and begins feeding in just a little aileron first; the wing starts up before the pilot gets his feet into the act, so the nose yaws ever so slightly outboard. This isn’t the end of the world—but, it’s not right, either. And it degrades the airplane’s in-flight efficiency.

In the stabilized turn—Once the amount of desired bank is established, the pilot should take all pressure off the rudder and ailerons (this assumes a normal, low-angle bank, and a properly rigged airplane). When he or she does this, the airplane will seek equilibrium and pretty much make the turn unassisted, centering the ball all by itself. That being said, a good percentage of the pilot population feels as if they have to be doing something to assist the turn. They can’t seem to leave the airplane alone, forgetting that airplanes always know more about flying than we do.

Go back up a couple of paragraphs and re-read the sentences that say the rudder is only needed to combat adverse yaw when the ailerons are deflected. There are two points here that pilots often forget while established in a turn: They hold a little aileron opposite to the turn, and hold a little rudder pressure in the direction of the turn. At that point, the skid ball is definitely unhappy.

Holding opposite aileron (outside aileron is up) while in the turn is common. It’s as if pilots are afraid the airplane is going to roll over on its back, which is just not the case. A few airplanes do have an overbanking tendency that must be fought with outside aileron, but not as many as you’d think. This dragging-aileron syndrome also is commonly seen while turning downwind to base and base to final, where p-factor is playing a role.

A good percentage of the pilot population feels as if they have to be doing something to assist the turn. They can’t seem to leave the airplane alone, forgetting that airplanes always know more about flying than we do.When aileron is held against the turn, the turn wants to slow down and the airplane wants to roll out of the turn, so invariably there’s rudder pressure in the direction of the turn to keep it going. This is common when the airplane is slow and turning onto final, a time when adverse yaw is higher than normal. This rudder-into-the-turn and aileron-out-of-the-turn combination not only makes the skid ball very unhappy but puts the pilot into seriously dangerous territory. If, at the same time, the pilot lets the airspeed deteriorate by not noticing that the nose is slowly coming up, he has created the perfect condition for stall/spin entry.

Returning to level gracefully—It’s when the turn is almost completed and we’re ready to level out that the rudder/aileron thing is most often confused. Rolling out of a turn should be as simple as rolling into it, but impatience on the part of the pilot often plays a role in screwing it up. He can’t wait to start the roll-out so, before the nose actually gets to where he knows it should be, he starts pressuring the opposite aileron, and the nose and skid ball start sliding sideways. Starting the roll-out early isn’t necessarily a mistake, assuming a little rudder pressure accompanies the aileron pressure—but, for some reason, it almost never does. In most cases, only the aileron is initially addressed, the rudder joining the fray a few seconds later. The result is a sliding, wobbly recovery that accomplishes the job at the expense of grace and efficiency.

P-factor presents its own challenges

P-factor, a turning tendency the airplane develops when at full power or in a glide, is mostly (but not entirely) the result of the center of thrust being shifted from the center of the propeller toward the blade with the greater angle of attack that is producing the most lift. That blade is pulling the nose off center. So, in a full-power climb the aircraft wants to turn left and in a glide it wants to turn right. Uncorrected, in a climb the ball will slide right (sometimes quite a bit) and in a glide the ball will slide left. In both cases, the bigger the engine and propeller in relation to the size of the airplane, the more noticeable the effect. In a Cessna 152, the effects are there, but minor. In a Pitts S–2B, p-factor defines much of the airplane’s handling. In all airplanes, it alters the coordination of turns when climbing or gliding.

With full power and the airplane at the lower climb speed, right rudder is needed to keep the ball in the center. In effect, p-factor has moved the neutral point of the rudder to the right. Now neutral is with right rudder depressed. That means the addition of rudder when rolling into turns is altered. In fact, if the airplane has enough power, when making a climbing left turn, no left rudder is needed with the left ailerons because the nose already wants to yaw left. So, while rolling into the bank, the already-present right rudder that is keeping the ball centered is relaxed enough that the p-factor cancels the adverse yaw and the ball stays centered. And, when the bank is established and the turn is in progress, the rudder isn’t completely released. It returns to the off-center, right-rudder-down position that is dictated by the p-factor. Turning right, the opposite is true. The already-present right rudder needs even more pressure.

In an approach, the nose wants to slide right (skid ball left) and “neutral” for the rudder moves left, because left rudder may be needed.

The interaction between all of the yaw-producing aerodynamic mechanisms (p-factor, torque, adverse yaw, spiraling slipstream, et cetera) and the different regimes of flight mean that there is no such thing as a “simple turn.” Some are more complex than others, but if the ball is centered, it means we’re doing it right.

That’s the pilot who is truly an aviator and is one with his airplane at all times. That can be us.