Get the app Get the app
Already a member? Please login below for an enhanced experience. Not a member? Join today
We are currently experiencing issues with our phone system. We apologize for the inconvenience.
News & Videos Budget Buy: Ercoupe 415-C

A postwar super-success with an enduring following 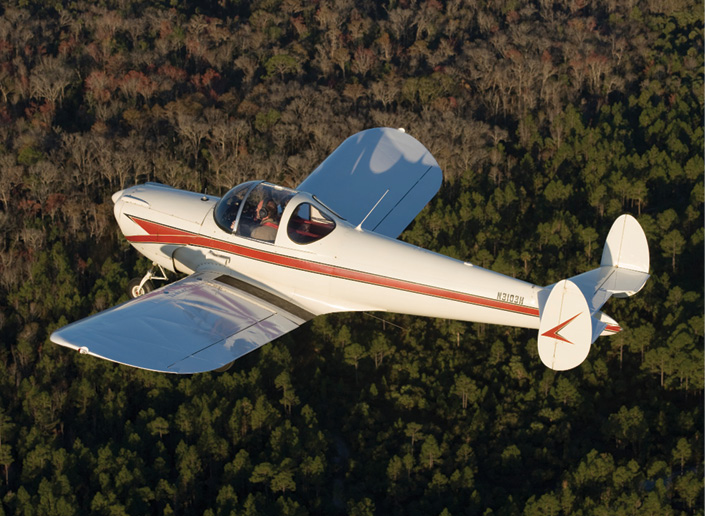 Vref value
Vref, which offers aircraft value for AOPA members, suggests a base value of the Ercoupe of between $18,000 and $25,000.

Insurance costs
AOPA Insurance Services estimates that insurance for an Ercoupe flown by a low-time pilot will cost between $550 and $600 per year.

Biggest plus: Fun to fly, draws a crowd.

Things to watch out for
Many Ercoupes have lived long, neglected lives, with some left tied down in the open. Corrosion, especially in the wing roots and center section, is rampant.

And one more thing...Some put the Ercoupe down precisely because it’s so well-mannered, and thus not a “pilot’s airplane.” But the design endures, partly because early model 415-Cs are light enough to qualify as Light Sport aircraft, but mainly because they are just plain fun to fly: You can slide down the canopy halves and cruise with the wind in your hair, your arm resting on the window sill.

The Ercoupe—so named because the first models were built by the Engineering and Research Corporation (ERCO) of Riverdale, Maryland—has a following of enthusiastic owners. It’s a two-seater built for simplicity, safety, and fun flying, and was technologically advanced in its day. It’s stall- and spin-resistant thanks to limited elevator travel, has excellent roll stability due to its large wing dihedral, has minimal left-turning tendency effects because its twin rudders are mounted out of the propeller’s blast, and has good landing traits because of its tricycle landing gear and trailing-link main gear. These all were firsts for a GA airplane in 1937, when the design debuted. Stalls and spins claimed many pilots’ lives back then, and the Ercoupe was engineered to counter the trend. Its designer was the legendary Fred Weick, who went on to craft Piper’s Pawnee agplane and Cherokee line of piston singles.

Flying an Ercoupe can be counterintuitive for the uninitiated. First there’s the taxi, which means you make turns using the control yoke, like a car—an intentional design element meant to ease the learning curve from car to Ercoupe. Early model 415-C Ercoupes came with no rudder pedals, just a single brake pedal. Rudder pedals were later offered as optional equipment, then as standard equipment in subsequent Ercoupes manufactured by a succession of firms—ending in 1970 with Mooney producing 104 Ercoupes dubbed M–10 Cadets, and featuring Mooney’s signature forward-swept vertical stabilizer.

High-speed cruise with the 75-horsepower Continental engine in the 415-C is around 110 mph on a good day, and fuel burn is a miserly five gallons per hour or so. The Ercoupe operating handbook doesn’t mention the word “stall,” but does say that buffeting can occur three miles per hour prior to reaching the ships’ “minimum” speed. Hold the yoke all the way back with power off and all you’ll experience is a pretty impressive mushing descent while still retaining roll control. The magic number for approach is 60 to 70 mph, and you can carry this speed right to touchdown. In strong winds, landings at faster airspeeds are recommended. Crosswind landings? Pilots are advised to land in a crab, as the tricycle gear’s geometry and directional stability will automatically straighten the airplane’s track during the ground roll.