Get the app Get the app
Already a member? Please login below for an enhanced experience. Not a member? Join today
News & Media Shannon's rebirth

Vestiges of aviation’s Golden Age—including a dozen historic aircraft—have returned to Shannon Airport in Spotsylvania County, Virginia, just outside of Fredericksburg. And the new owner of the storied privately owned, public-use airport is taking steps intended to not only sustain but enhance the facility. 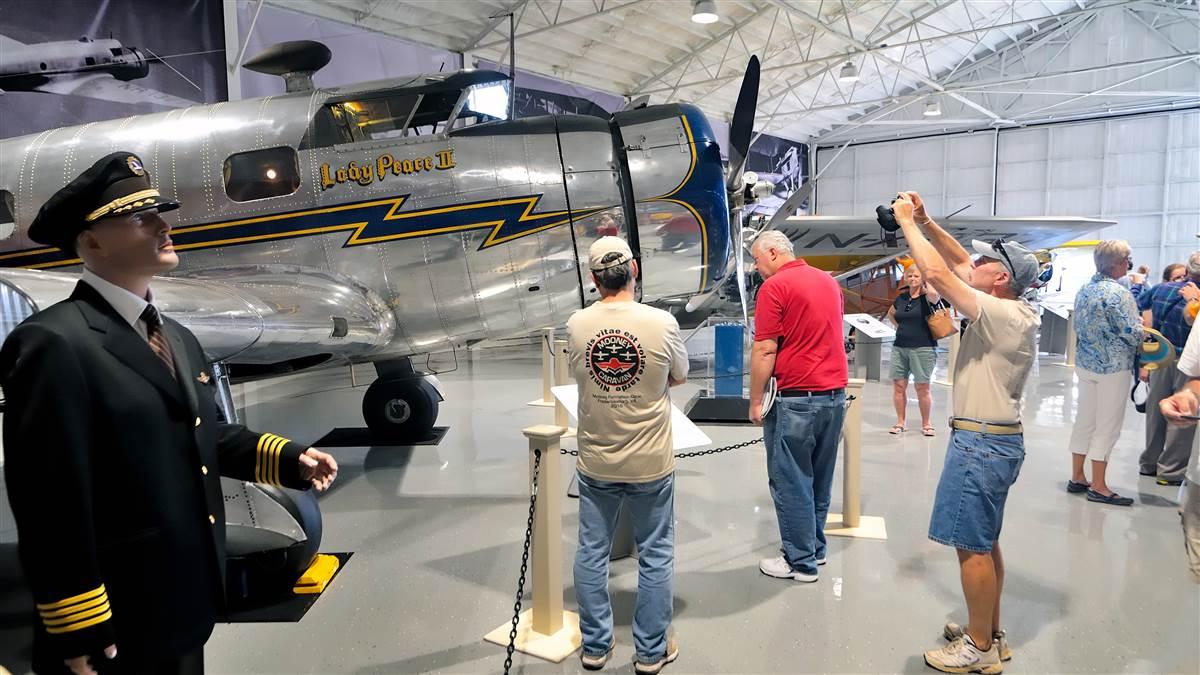 The Shannon Air Museum reopened at Shannon Airport in Fredericksburg, Virginia, in June 2017. It’s home to 20 rare aircraft from aviation’s Golden Age, dating from World War I through the 1940s. The June 3 event marked a homecoming for some of the aircraft, which were displayed at the airport before being trucked to Richmond more than 30 years ago.

Shannon Airport founder Sidney L. Shannon Jr. opened the museum in 1976, collecting 13 vintage aircraft and many artifacts from aviation’s early history—including the only known surviving Vultee V–1A; a very rare Standard E–1 biplane, a Spad VII built in 1917 for service in World War I; a 1927 Pitcairn PA–5 Mailwing; and a Bellanca CH–400 Skyrocket, originally built in 1928 as a CH–300 Pacemaker and converted to a CH–400 after being salvaged from a glacier.

After Shannon Jr.’s death in 1981, the aircraft became the core of the new Virginia Aviation Museum at Richmond International Airport, which was absorbed by the Science Museum of Virginia in 1990. But the aviation museum closed in June 2016 when its building developed significant problems, leaving the aircraft homeless.

Current airport owner Luke Curtas remembered the Shannon airplanes from a visit at age 18. “When I saw the artifacts that were still at the airport, like tool boxes from 1918, I said, ‘We need to get these planes back.’” But he never expected to receive the entire collection. A new nonprofit, Shannon Air Museum LLC, received the 12 original Shannon airplanes—and eight others. “We’d like to get some of these flying again,” added Curtas, a pilot who flies a Cirrus.

“What you see today is just a fraction of what we’re going to hope to build—a 25,000-square-foot museum,” said Gary Skinner, a Spotsylvania County district supervisor and the airport manager. The retired Marine Corps pilot, passionate about introducing young people to aviation, envisions a partnership between the county government and private sector to build a multiuse facility with a theater, simulators, and youth activities that also could host banquets and other events.

The museum is open to the public from 10 a.m. to 4 p.m. Thursdays, Fridays, and Saturdays, and can be seen Tuesdays and Wednesdays by appointment; call the airport office at 540-373-4431. Admission is free and donations are accepted.—MC

After Shannon Jr.’s death in 1981, Billie Toombs—who had worked with Shannon at the airport since 1968—managed the facility for the bank administering his estate. By 1997 she and partner Robert Stanley owned the airport. Nearly two decades later, however, pressure from developers was building, and in 2014 they sold the airport to Luke Curtas and his wife, Kim.

When Curtas started flying for business—he owns a Cirrus and a manufacturing company with key customers in New York and North Carolina—“I kept thinking, it would be a shame to lose this airport.” Curtas thought about buying the airport, and building a factory on its grass runway—until he realized how valuable that runway is to the airport, both operationally and for aircraft parking during events. He bought a nearby building for the manufacturing operation instead.

Kim Curtas initially thought her husband’s flying lessons were a fad. When he suggested they buy the airport, “I’d think, hopefully, this one will pass. But I’ve learned by now, since he’s done so many things, if it’s strong on his mind—I’d better figure out a way to accept it.

“The airport doesn’t seem to be a phase,” she added. “He definitely has a calling.”

With a little help from some friends

Paid staff operate the airport, but a crew of dedicated volunteers is primarily responsible for the museum, and they’re quick to help out elsewhere around the airport when needed.

Tom Doran of King George, Virginia, has flown out of the airport since 1980. “The airport went downhill and we worried about it closing,” he said. “This has always been a ‘homey’ airport—other airports are like a business. Billie and Stan kept it going, but Luke has turned it around.”

Ray Wiseman of Fredericksburg came to Shannon Airport in 1967, the same year he built his Pitts S1–S—which he flew in the last Sid Shannon-era airshow, in 1981. “He got the best in here—people like Bevo Howard,” he said. Wiseman flew airshows for about 15 years, and won the Canadian aerobatic championship in 1970. “When Luke came along, it was a real revelation. We didn’t have to taxi through the lakes on the taxiway. It’s made a huge difference.”

Retired airline pilot Don Serio of Irvington, Virginia, flies a Stearman. He first came to Shannon in 1957, at age 16, and worked for Sidney Shannon Jr. after school. “I was interested in flying, but I really was a gofer,” Serio said. “He was really generous in sharing information. I wish I’d paid more attention.”

Serio earned his certificate and ratings, leaving for the Army and then the airlines, but he returned often. “I flew what he had,” Serio said. “He wanted the Golden Age—flying—that was his pursuit.” The museum’s Bücker Jungmeister replicates Bevo Howard’s. “[Howard] was a good friend. He would come up here and do shows.”

While Shannon Jr. had a lot of favorites, “the Pitcairn was one that he really, really liked, because his father was associated with it,” Serio recalled. One day Shannon Sr. visited and saw the restored mail plane. “He said, ‘Son, you did a good job with that.’ I remember Mr. Shannon being really proud of that.”

The Vultee V–1A single-engine airliner was bought in April 1977, for $155,000, because of Shannon Jr.’s relationship with Dick Merrill. “It was the last one.”

Serio flew every airplane in the collection except the 1918 Standard E–1 biplane, which they decided not to fly because it was one of a kind. “The Vultee looks like a big monster, but you don’t want to do a three-point landing. The Pitcairn is very heavy on the controls—I wouldn’t call it a truck, but it’s approaching it. On grass it makes you look good, but on asphalt…. The Curtiss Robin was the easiest one to fly,” Serio said.

Learning that the collection would return to Shannon Airport “really was a dream come true. I couldn’t believe it at first,” Serio said. “Luke brought [the airport] back to what Sidney had at the time, and would have liked—he’s improved it. Sidney would be smiling down.”

“We’re trying to get some of these running, some of them flying,” Doran added. “It would be in the spirit of Sidney Shannon.” Except for the Cub, the aircraft were disassembled and trucked to Richmond; when the volunteers started disassembling them for the return to Fredericksburg they found the control surfaces had never been reconnected—which saved them time with the move.

A lot done, more to do

A hangar that the museum’s Curtiss Robin once called home is now the Robin’s Nest Café. An adjacent gift shop offers many rare model aircraft, among other items.

The airport trimmed trees on the runway approaches. There’s fuel, 100LL and Jet A—both self-serve and on trucks—and two courtesy cars. Although the airport doesn’t operate a shop, it does boast three airframe and powerplant mechanics with inspection authorization, and a thriving flight school. The IMC Club meets monthly except during the summer, drawing 15 to 30 pilots. And this has all been done without federal funds.

“On Saturdays this place is just jammed. The ramp fills up.” People bring their kids to sit on the deck and watch airplanes, Curtas said.

“People walk in and the word they say is ‘wow’—they don’t expect it to look like that,” said Gary Skinner, who recently became the airport manager. “Everyone you meet has a pleasant personality. That’s what I like about the airport nowadays.”

The airport’s fall festival drew 6,000 people and at least 60 airplanes. EAA Chapter 1099, based at Shannon, set an airport record with 135 Young Eagles flights during the airport’s grand reopening in November 2014; Chapter 189 in Manassas helped.

A reduction in Spotsylvania County’s personal property tax—which affects aircraft owners—helped aircraft to return. Today only one of Shannon’s hangars is being used for nonaeronautical purposes; at one point that number was as high as 40 percent of the hangars.

Part of the Battle of Fredericksburg, during the Civil War, was fought on the airport grounds in December 1862. A ditch near the end of today’s runway became a focal point in the battle, and hand-to-hand combat raged before federal troops retreated; artillery was sited near today’s terminal building. Curtas said that when a taxiway was replaced, a lot of artifacts were dug up—including buttons, Union shells, and Confederate musket balls.

Between the area’s Civil War history and the air museum, the airport “is a very valuable tourism attraction,” Skinner said. “There’s definitely an economic value in addition to the historic aspects.” So close to Fredericksburg, the airport is truly a regional asset, he added.

“If you’re going to make money, you have to invest. That’s what Luke has done here,” said Skinner, a Marine who flew the A–6 Intruder and EA–6 Prowler but didn’t know anything about World War I and Golden Age aircraft. “I can go [into the museum] five times a day, and I’m just as excited the fifth time as the first time.”

The airport is buying three times the fuel it used to. Tenants get hangar rent discounts based on fuel purchases to encourage flying. Similarly, the airport now buys engine oil in larger quantities, resulting in lower prices.

In exchange for a five-year lease, Curtas built a hangar for medevac operator Air Care, which bases a Bell 407 at Shannon Airport.

While the airport doesn’t make money on its lease to the restaurant, it brings in customers who buy fuel and oil, and visit the museum. “You’ve got to keep people flying,” Curtas said. “That means amenities and services.” The Virginia Aeronautical Historical Society recently moved to the airport; its Hall of Fame is displayed in the museum.

“The goal this year is to become an aviation campus,” Curtas added, with summer camps and other activities for young people that tie the museum into the community. “We’re going to create an atmosphere to get the next generation into aviation.”

Several events bring the public to the airport. It will host a cystic fibrosis walk on April 21, and a YMCA fun run on the runway June 2. The Harvest Festival Airshow and Fly-In is October 27. The Navion owners’ group had a fly-in at Shannon in 2015, and Curtas said another group is interested in having an event at the airport. “We are a great place to have a regional convention,” he said.

Curtas recently bought three small houses on the southeast corner of the airport, and plans to convert them into an airport inn where pilots can taxi in and stay overnight. Privately owned airports tend to reflect their owners, and Curtas has put his mark on Shannon.

“It’s truly amazing. I didn’t think airports grew that fast,” Skinner said. “It’s got a great future. This is just the beginning.”