Get the app Get the app
AOPA will be closed July 4th, in observance of the Independence Day holiday. We will reopen at 8:30 am ET on Tuesday, July 5.
News & Media Five Questions: Shaesta Waiz 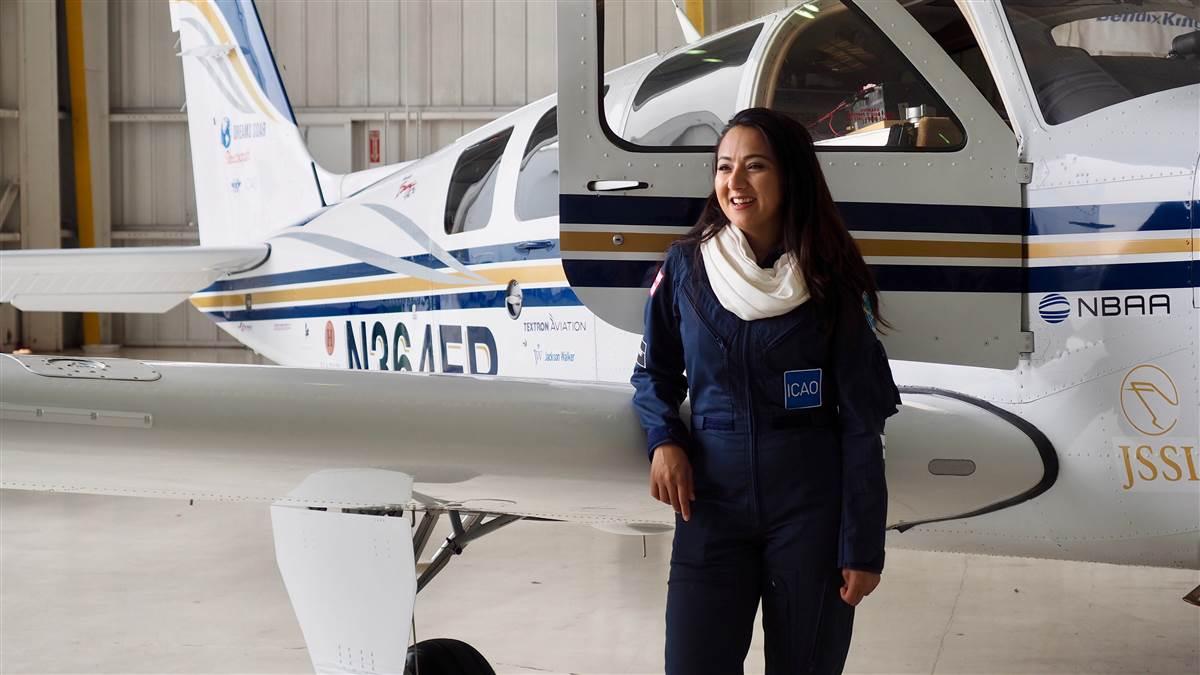 Shaesta Waiz completed an around-the-world flight in 2017 to promote STEM (science, technology, engineering, and math) and aviation education for women. Waiz, 30, launched on her global odyssey May 13, 2017, in a single-engine Beechcraft Bonanza A36. The route took her to 20 countries, across five continents, and more than 22,500 nautical miles. Born in a refugee camp in Afghanistan, Waiz fled with her family to the United States to escape the Soviet-Afghan war. She studied at Embry-
Riddle Aeronautical University in Daytona Beach, Florida.

How did you get started in aviation? Growing up, I believed my future consisted of getting married at a young age and starting a family. It wasn’t until I found aviation that I started thinking about having a career and going to college. I had the opportunity to fly on a commercial flight at the age of 18. Sitting in the back of a Delta jet aircraft, I was expecting the flight to launch into the sky like a rocket. I was very nervous. When the aircraft finally took off and gracefully soared through the sky, I felt a powerful sensation. I realized I could maybe travel the world. I often tell children that your biggest fear in life can be your biggest passion.

What was it like being one of the only women in a flight training program? Coming from a family of five sisters, being surrounded in a male-dominated environment was an adjustment. I did feel like I had to prove myself as a proficient pilot on several occasions. When my male classmates would make a mistake, it was often passed along with a laugh. When my fellow female classmates or I would make a mistake, we would never hear the end of it.

What was your biggest challenge on your global flight? As the pilot in command and the only pilot on board, I had to ensure I was well rested, hydrated, mentally prepared for the flight. In preparation, I spent about three years researching climatology, oceanic operations, and the international air traffic system. I figured if I could learn about international navigation for small GA aircraft, I could eliminate the unknown and flying around the world wouldn’t be as scary as it seemed.

What advice to you have for women in flight training? Amelia Earhart said, “The best way to do it, is to do it!” Get started. There will be many things you will not know or be sure about. The greatest pilots in the world once walked in your shoes. It is because they kept walking that they became the greatest.

What was the purpose of this flight? The goal of the flight was to inspire the next generation of STEM and aviation professionals, globally. How Dreams Soar is accomplishing this goal is by partnering with ICAO [the International Civil Aviation Organization] and hosting outreach events, 32 in total to be exact. Our goal was 15. Through the global flight, I engaged with more than 3,000 children.