Get the app Get the app
Get the latest news on coronavirus impacts on general aviation, including what AOPA is doing to protect GA, event cancellations, advice for pilots to protect themselves, and more. Read More
Already a member? Please login below for an enhanced experience. Not a member? Join today
News & Videos Feel the heat

It’s unseasonably warm at 82 degrees Fahrenheit as you preflight your fully loaded 1965 Cessna 172 Skyhawk. At 9,927 feet above sea level, the field is the highest in North America. You know the heat and altitude will affect the Skyhawk’s takeoff roll. But how much more runway do you think you’ll need, in percentage terms, than you’d use at sea level on a normal day?

Whatever number you chose, you’re wrong. 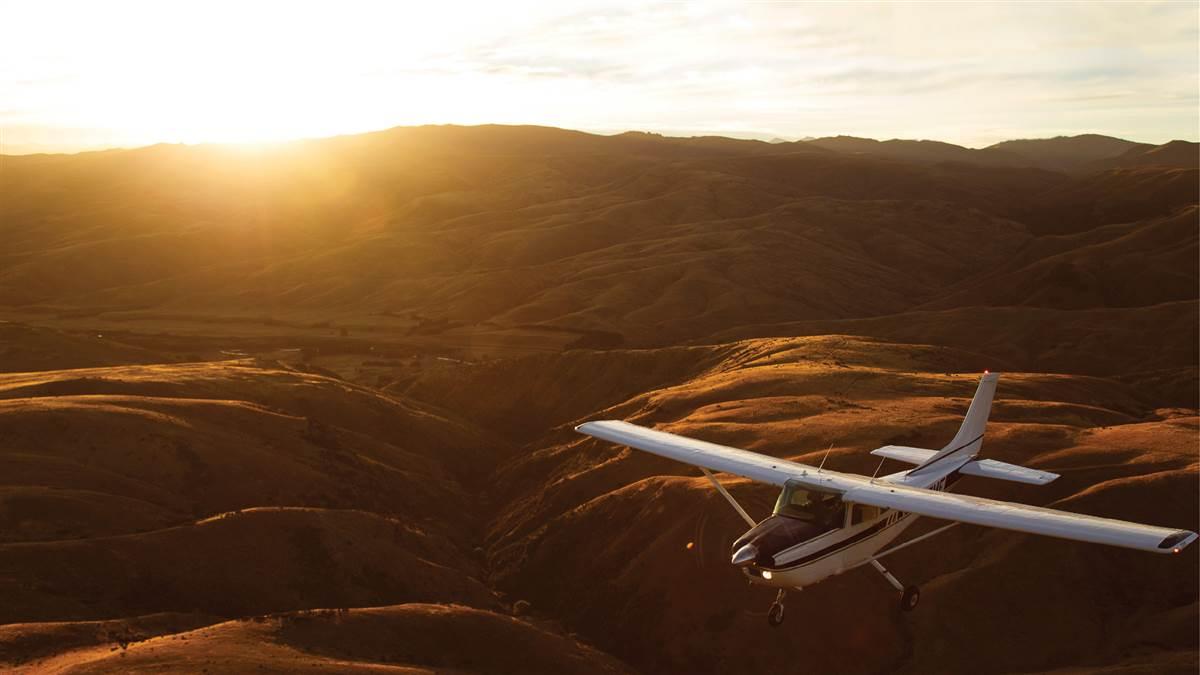 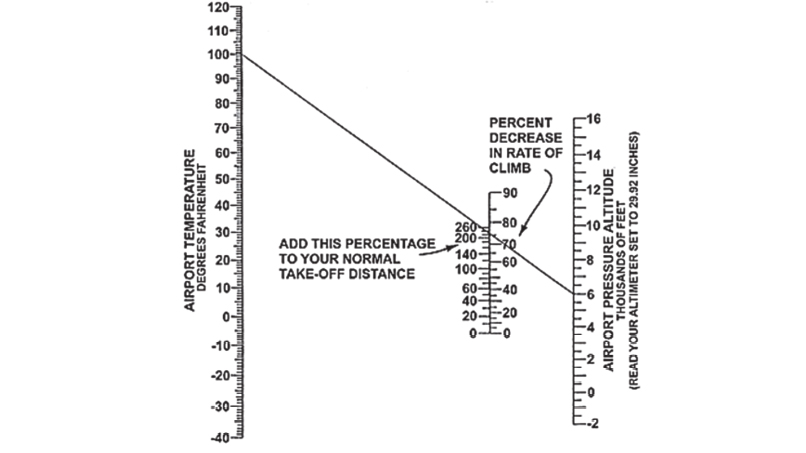 The E6B flight computer, sometimes called a “whiz wheel,” is so named for its original part number for the U.S. Army Air Corps. The circular slide rule, used for calculating such important figures as groundspeed and fuel burn, has changed little since it was developed by U.S. Navy Lt. Philip Dalton in the late 1930s—although now many apps offer digital E6B capability.

But don’t feel bad; it’s a trick question. On our 82-degree summer day, if we assume standard pressure and a humidity of, say 40 percent, we get a density altitude of 13,767 feet. In fact, on any warm day at Lake County, you can expect a density altitude of more than 13,000 feet. But if you look at the Skyhawk’s pilot’s operating handbook (POH), there’s no data for a nearly 14,000-foot pressure altitude in the takeoff distance chart. Why? Because this Skyhawk’s service ceiling is only 13,000 feet. No amount of runway will guarantee you can get off the ground.

That might be an overly dramatic example of the effects of density altitude, but it’s instructive. “Hot and high” conditions can have a significant effect on your aircraft’s performance even in more realistic scenarios. The Skyhawk’s ground roll more than doubles between sea level and a pressure altitude of 8,000 feet. And a hot day at 1,000 feet above sea level can trick your airplane into thinking it’s at 4,000 feet, which can easily add 25 percent to your takeoff roll. The effect of air temperature on aircraft performance is not subtle, and not limited to high-altitude mountain airports.

The science behind density altitude

The higher you go in the atmosphere, the less dense the air becomes. Plus, the hotter the air is, the more it expands. Or, in the vernacular, air gets “thinner” at high altitude and hot temperatures. The thinner the air is, the less effective your various airfoils are. That means less lift from your wings and less thrust from your propeller, which is just a sideways wing.

Imagine lying on one of those expensive memory foam mattresses. It conforms to your back and holds you firmly but comfortably above the box springs. Now move to a feather bed. You sink to your pancreas. Air under the wing is the same: A dense mattress of air lifts and supports better than a soft, thin layer of air. So, on a hot day, as air expands and thins, it’s as if you are flying from a higher altitude than you really are. Your airplane will perform as if it were higher, taking longer to get off the ground and climbing more slowly. 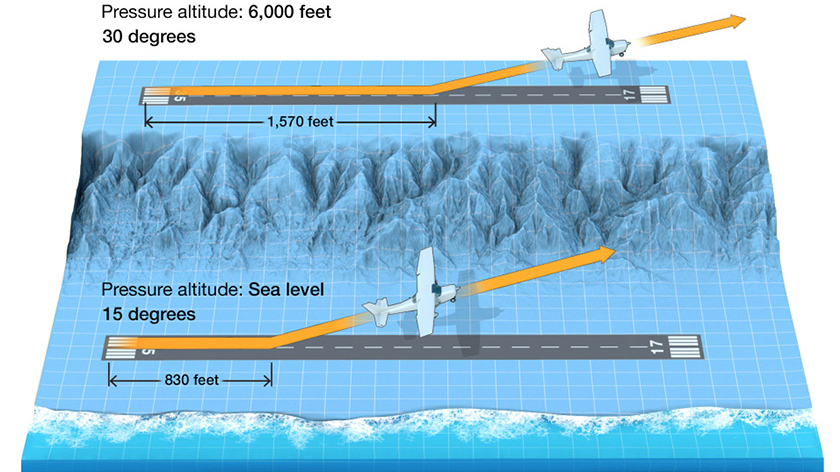 This Cessna 172 has a takeoff ground roll of 830 feet in standard conditions at sea level. At a pressure altitude of 6,000 feet and a temperature of 30 degrees Celsius, however, the airplane “feels” as if it is higher than 9,000 feet. With less dense air, it uses up almost twice the runway.

How high are you? It depends on what you’re measuring.

Indicated altitude. The altitude read directly from the altimeter when it is set to the current altimeter setting.

Pressure altitude. Altitude above the standard 29.92 inches of mercury plane.

True altitude. The vertical distance of the airplane above sea level—the actual altitude. It is often expressed as feet above mean sea level (msl). Airport, terrain, and obstacle elevations on aeronautical charts are true altitudes.

Absolute altitude. The actual distance between an aircraft and the terrain over which it is flying—usually measured in feet above ground level (agl).

A supercharger is an air compressor used to increase the pressure of air taken into the cylinders of a reciprocating engine. Superchargers are driven directly from the engine.

A turbocharger is an air compressor driven by exhaust gas that increases the pressure of air going into the engine.

Both super- and turbochargers mitigate the effects of altitude on engine performance.

You can determine—in advance—just how badly the cards are stacked against you, and what that means to the airplane you are flying.

How is density altitude calculated?

There are a number of different formulas to use to calculate density altitude, some of which are mind-bogglingly complex, that include such factors as the gas constant, gravity, static air temperature in kelvins, and the molar mass of dry air.

Luckily for you, there’s an app for that. Electronic flight bag apps, such as ForeFlight Mobile and Garmin Pilot, have built-in density altitude features, and other, dedicated apps also will calculate density altitude for a given location.

Or, if you are a Luddite like some of us, vintage metal E6B flight computers let you easily calculate density altitude without even needing a charge. And, because ATIS and AWOS stations at higher altitude fields often include density altitude, there’s no excuse for not knowing what the density altitude is. If you’re a glutton for punishment, the “simple” formula to calculate it manually is: Density altitude = pressure altitude + 120 x (outside temp in degrees C – standard temp at altitude).

Sharp eyes might have noticed that humidity is not in this formula. That’s because atmospheric humidity’s role in density altitude is small enough to be left out of simple formulas altogether. But don’t count out humidity entirely. High humidity can add 10 percent to the takeoff run, and make climbs yet more sluggish.

The best place to learn how density altitude will affect your aircraft’s performance is in the aircraft’s POH, which includes performance charts showing the effect of density altitude on that particular airplane make and model. For vintage airplanes lacking those charts, a Koch chart (p. 38) can be used to ballpark the increase in takeoff roll and the reduction in climb rate that are the price to pay for playing in the heat.

In thin air, in technical terms, your aerodynamics stink. You’ll need more room and more time to get to cruise. Takeoff rolls increase and climb rates shrink. At the other end of the flight, high density altitude increases true airspeed while the indicated airspeed stays the same. Landing hot leads to landing hot: You’ll touch down moving faster than your airspeed indicator indicates, and that means you’ll eat up more runway slowing the beast down.

And there’s more going on than just your airfoils. Thinner air also has a negative impact on the normally aspirated engines common in the general aviation fleet, causing them to generate less power—in addition to the loss of thrust that comes from the thin air. And if the humidity is high, these same engines perform even worse.

Feeling the heat without breaking a sweat

So, it’s hot, high, and humid. You’ve run the numbers, and things just don’t look too good for the home team. Now what? You have options.

The simplest thing, of course, is to wait for a cooler part of the day. Normally, the lowest temperature of the day is the first hour after sunrise. Late afternoon is your next best bet, and don’t rule out taking a night flight to get out of a hot, high area.

When it comes time for takeoff at any density altitude above 5,000 feet (unless your engine is turbo- or supercharged), maximize your engine’s performance by leaning properly; and review your maximum takeoff performance checklist. Some airplanes climb better with one notch of flaps, but others pay a high drag penalty and do worse high and hot with flaps. Consult your POH.

In addition to heat and altitude, your other performance enemy is weight. Can you lighten the load? Reduce your ramp weight with less fuel, less baggage, or leave a passenger behind. Aerodynamics experts recommend keeping the airplane below 90 percent of gross weight when operating in high density altitude.

But what if, despite your best efforts, something goes wrong? What if you punched the wrong button on the iPad, read the E6B incorrectly, or underestimated the weight of the suitcases in the back? How do you tell the difference between density altitude performance that’s merely white-knuckle sluggish from the makings of an NTSB accident report?

The rule of thumb is if you reach the midway mark of the runway and don’t have 70 percent of your takeoff speed: Abort.

Cool as a cucumber

If it’s freezing cold at a 4,000-foot-elevation airport, your airplane will perform as if it were flying from 1,000 feet lower. Airplanes don’t know how to read their altimeters; they just feel the wind in their wings—be it thick or be it thin.