Get the app Get the app
Get the latest news on coronavirus impacts on general aviation, including what AOPA is doing to protect GA, event cancellations, advice for pilots to protect themselves, and more. Read More
Already a member? Please login below for an enhanced experience. Not a member? Join today
News & Videos Mecca

Connect with the spirit of aviation in Oshkosh

Say “Oshkosh” to someone on the street and they’ll most likely think of overalls and cute kids’ clothes. But say it to a pilot and one thought comes to mind: aviation’s mecca. 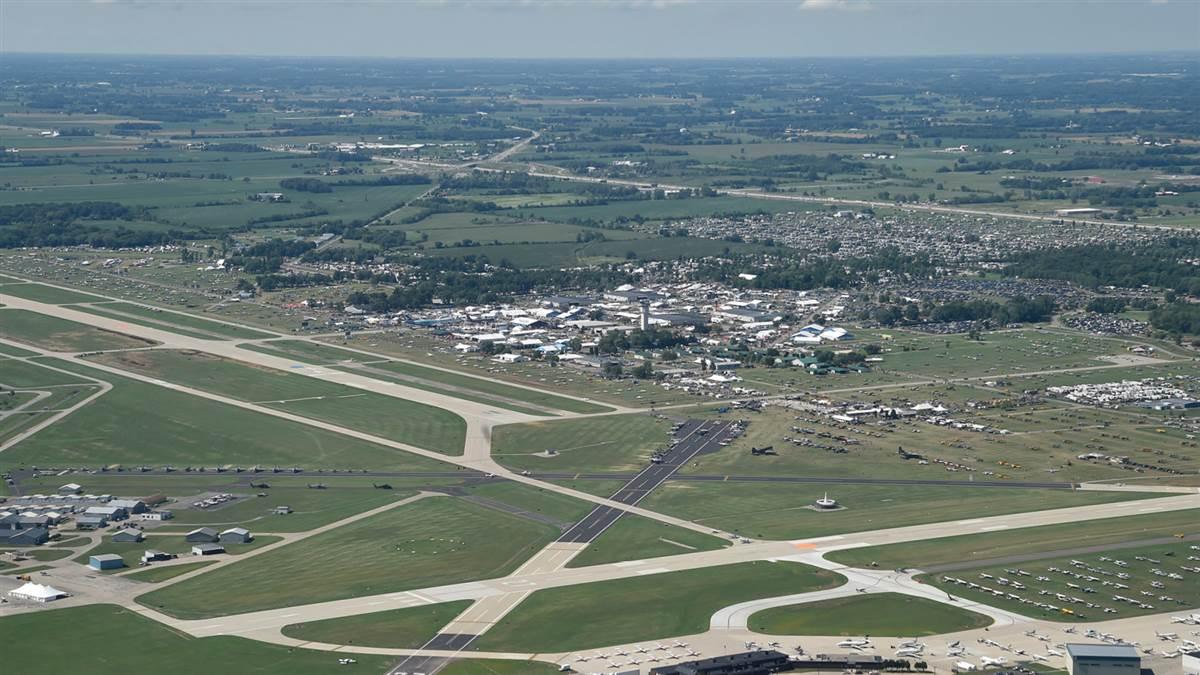 Plan for hot, cold, and stormy weather. Most weeks have a bit of each.

Bring two pairs of shoes. One will get muddy or make your feet sore. A backup helps.

Make a plan. Study EAA’s website for a list of exhibitors and a schedule before you leave. Then make a plan for what you want to see each day. The show is too big to see in one, or even two days.

Prepare family. Coming to Oshkosh with family can be great, but nonpilot spouses and kids can and do get bored and tired. Plan accordingly.

Bring sunscreen. Other than airplane wings and the exhibit hangars, there’s little shade on the grounds.

Read the notice to airmen. When you’re ready to fly in, study the notam booklet (available on the EAA website) and bring it with you. It has information on the procedures for flying and parking.

Bring a water bottle. Water is expensive at the show, and you’re going to need it.

Plan to shop. You will buy something. It’s inevitable. If you flew in, that’s a weight and balance consideration, although many sellers will help you ship your purchases home.

Be flexible. Don’t be surprised if you arrive on Monday or Tuesday and the airport is closed to general aviation parking. You’ll hear it on the ATIS before you get to the city of Ripon. In that case, be ready with a Plan B for Fond du Lac or Appleton.

Oshkosh has its own language. Here are a few key terms to know:

Brat—Short for bratwurst, this spicy sausage is served by the truckload during the show. Pair with roasted corn and you have haute cuisine.

North 40—Generally speaking, the aircraft parking area that lines both sides of Runway 9/27.

Rock your wings—Bank back and forth without changing direction in order to acknowledge an air traffic controller’s instructions.

Camp Scholler—General camping area open to tents, RVs, and so on.

Fly Market—Yes, basically a flea market for pilots and aircraft owners, this area of cheap and fun finds is on the southwest corner of the exhibit area.

Experimental— The FAA issues Experimental airworthiness certificates in several categories, including for air racing and research and development. But the most common type of Experimental aircraft isn’t the product of some top-secret skunkworks. Experimental amateur-built aircraft encompass the many types of homebuilt aircraft constructed in garages across the country. Amateur builders have a lot more freedom (and lower costs!) than traditional manufacturers, so many technologies enter the general aviation market through the Experimental world first.

Seaplane base—Probably because it’s so far from the show, the seaplane base on Lake Winnebago remains a well-kept secret, and it is a must-see venue while you’re at the show. Hop on a shuttle bus and plan to spend an evening enjoying the water, slower pace, and frequent seaplanes taxiing in and out of the cove.

Ultralight landing strip—On the far south end of the airport there’s a small grass strip where ultralights fly in the early morning and before sunset. A great place to go and relax.

EAA Aviation Museum—EAA has a great museum adjacent to its headquarters. Set far to the west side of the airport, the museum is worth a few hours while you’re in town. Plus, there’s air conditioning!

Warbird Alley—If you never venture out of the main show area it’s easy to miss Warbird Alley, the parking area for warbirds that have attended. You can stroll among dozens of T–6 Texans, P–51 Mustangs, and more. Volunteers dress in period garb and tootle around in old Jeeps.

AOPA Tent—OK, so it’s not a secret, but we’d be remiss not to invite you to the AOPA Tent the week of Oshkosh. You can renew your membership, take in a seminar, buy some swag, meet your favorite writer or photographer, gawk at the Sweepstakes Super Cub, or just lounge in one of our chairs. 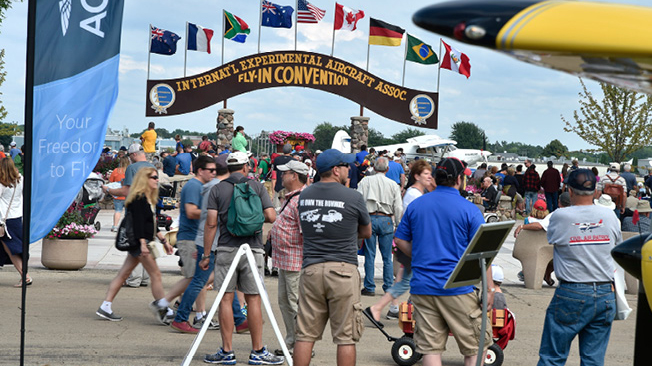 Every year around the last week of July, hundreds of thousands of pilots and aviation enthusiasts descend on otherwise sleepy Oshkosh, Wisconsin, for the world’s largest annual gathering of pilots. Officially known as EAA AirVenture Oshkosh, the show most longtime pilots still call “Oshkosh” isn’t easy to put into one box. To some it’s an airshow, to others a fly-in. Over time it becomes less about the cool hardware, and more about reconnecting with friends and your aviation family.

Started as a small gathering of aircraft in Milwaukee in 1953, the show moved to Rockford, Illinois, during the 1960s, and eventually to Oshkosh in the 1970s. The small midwestern city now houses the Experimental Aircraft Association’s headquarters and hosts the annual fly-in.

Because of EAA’s Experimental aircraft focus, the show has always had held a special place for homebuilders and kit manufacturers. Certificated aircraft manufacturers, warbirds, and current military and even commercial aircraft have become an integral part of the show in more recent years. And now that aerospace turns to the twenty-first century, drones, commercial space travel, and electric aircraft have a presence as well.

With such a big show it can be daunting to know how to navigate the challenges of flying in, finding a place to stay, and getting around once there.

Of course, no aviation life would be complete without flying into OSH during the week of the show. Typically held the last week of July between Monday and Sunday, the 2018 show is July 23 to 29. Arrivals begin the weekend before, and if the weather is nice, on-airport parking can close because there is literally nowhere left to park airplanes. If that happens, or if you’re not ready for the challenge of Wittman Regional Airport (OSH), Appleton (ATW) and Fond du Lac (FLD) are both good alternatives. 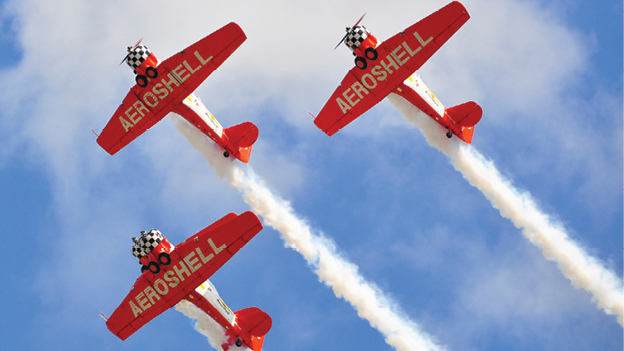 Deciding where to stay is a crucial choice. The options range from relatively inexpensive to absurdly overpriced. For the former, break out the tent and camp either with your airplane or in one of the designated campgrounds. Both options have well-kept bathhouses. Moving up the scale, the next option is the dorms at the University of Wisconsin, Oshkosh. Or, if you have a load of friends or a large family, thousands of Oshkosh residents take the opportunity to get out of Dodge, and rent their houses. Finally, hotel rooms are available if booked well in advance, but be prepared to be gouged.

Trams and shuttle buses make getting around the grounds free and easy. Some even run to town or to stores and restaurants. The main show area is entirely walkable, although you’ll be sore by the end of the day. Getting from the warbirds to vintage aircraft is made much easier with a quick tram ride. To get from camping to the show, a bicycle is a great way to go.

If you must fly the airlines, Appleton and Milwaukee both have rental cars available, and if the flights are purchased and rental cars reserved well in advance, rates are very reasonable. 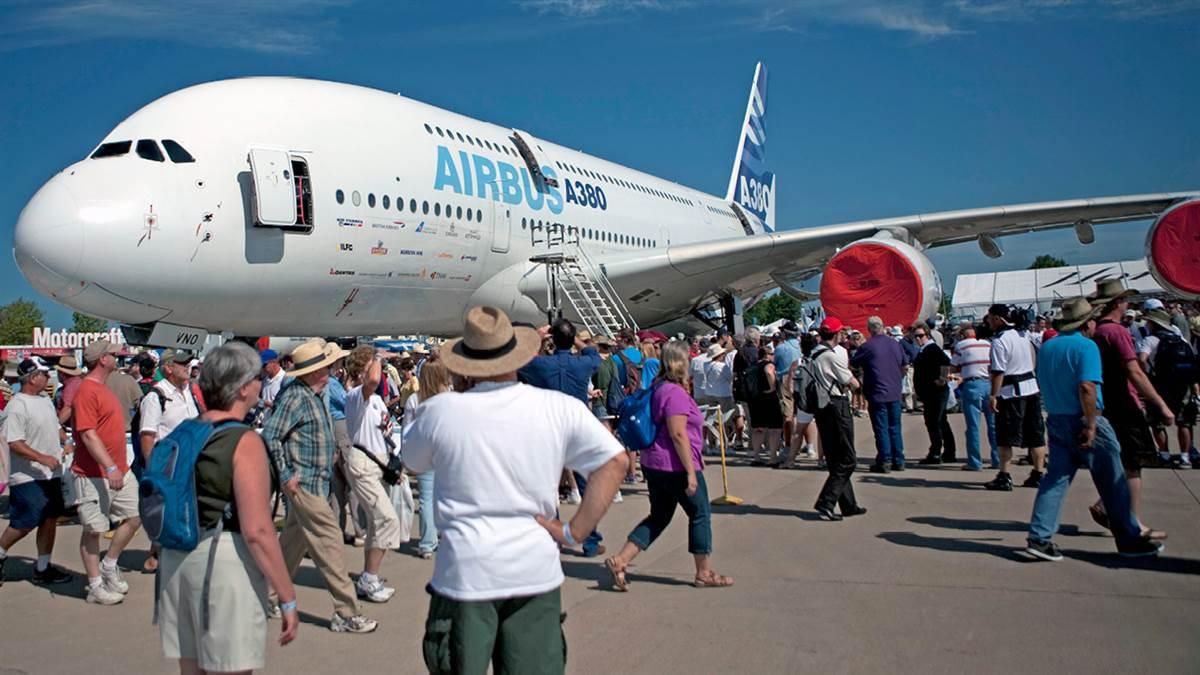 If we’re being honest, the first time you go to Oshkosh, assuming you aren’t experienced at mass aircraft arrivals, you probably shouldn’t fly in. The reason will be obvious when you safely walk into the show for the first time and see a giant banner hanging from the imposing air traffic control tower that reads, “World’s busiest control tower.” During the show, controllers typically direct more than 3,000 aircraft operations in a 10-hour span, more than major international airports handle in 24 hours. Because the airport is closed at night and during the airshow, everyone is trying to fly in within a short period.

What makes the chaos possible is not unlike what happens at those major international hubs. A closely followed, repeatable procedure enables an orderly flow of traffic, setting up every airplane to arrive and land safely. The official notice to airmen (notam) procedure begins in Ripon, Wisconsin, 15 miles from Oshkosh. From there airplanes form a conga line 10 miles north to Fisk. Here, controllers spot airplanes visually and give individual runway assignments. Verification isn’t the back and forth on the radio you’re used to. Instead, the controller will tell you to “rock your wings” as an acknowledgement. From there you’ll monitor tower and be cleared to land on the designated runway. Don’t be surprised to be asked to land halfway down the runway on a certain bright dot, only to hear another airplane directly behind you be cleared to land on another dot. Separation standards are reduced for the show to accommodate all the traffic.

It sounds straightforward, and it generally is. But with dozens of airplanes flying in at the same time, runway changes, IFR arrival delays, and all kinds of other kinks that can be thrown into the operation, flying into OSH during the show can be challenging. (Unless you’re in a helicopter. Then you can fly right to your landing spot without talking to anyone. I highly recommend it.) 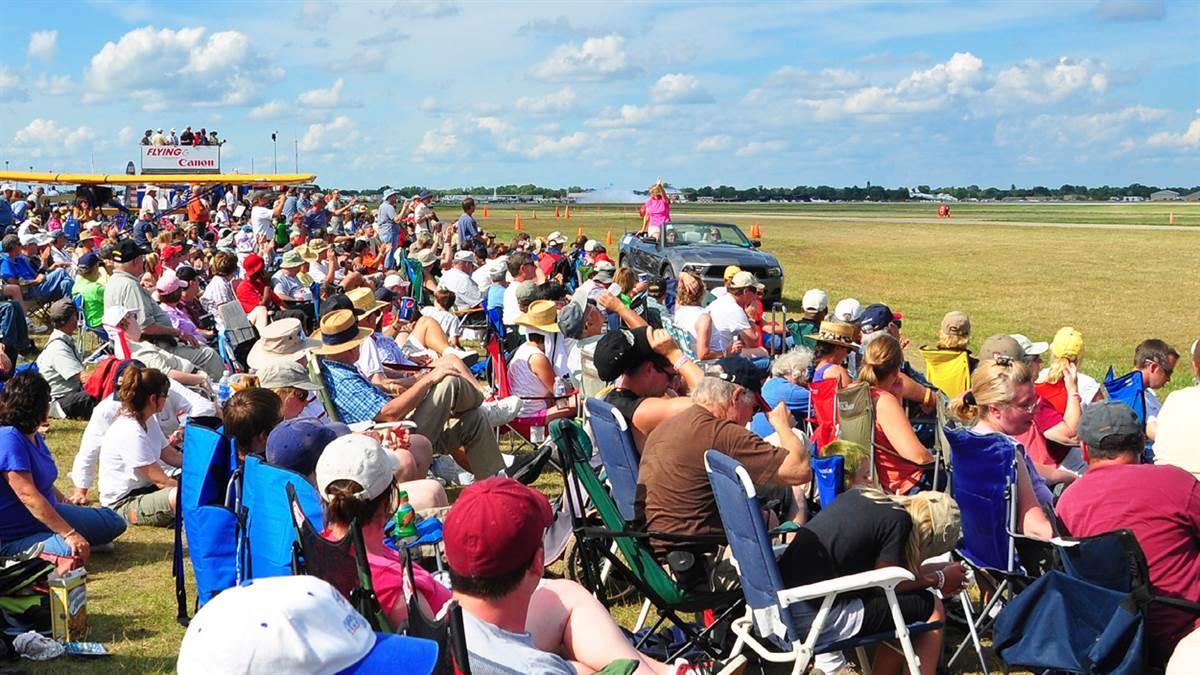 After you attend EAA AirVenture once and feel like you’re ready to try flying in, print and read the notam, grab a friend as another pair of eyes and emotional support, and go for it. You’ll read that sign on the control tower with a new appreciation.

The fact that an Oshkosh show guide runs hundreds of pages should tell you how much there is to see and do at the show. Some people only come to watch the airshow, others come to buy something from the more than 500 exhibitors. Others come to learn during one of the show’s seminars. Or they come simply to walk around, be around, and talk about airplanes. Much like a car show, part of the fun is hanging out and looking at what others have flown in. At the show you’ll find warbirds, vintage aircraft, Experimentals, Spam cans, seaplanes, jets, ultralights, helicopters, military hardware, and an occasional commercial jet. Seeing all this will take a few days. Plan to stay a bit, have a brat, and enjoy the days with hundreds of thousands of your closest friends.