Get the app Get the app
Get the latest news on coronavirus impacts on general aviation, including what AOPA is doing to protect GA, event cancellations, advice for pilots to protect themselves, and more. Read More
Already a member? Please login below for an enhanced experience. Not a member? Join today
News & Videos Flying them home

Living on an island sounds like a dream. The sea surrounds you, the vistas are incredible, the pace is slow, and your neighbors are friends. Just one thing could mar that idyllic situation: illness. If your island community has limited medical resources, getting to treatment can be challenging at best—and devastating at worst.

The song “Silver Eagles” was written by patient Teddy Deane about his cancer treatment flights with the San Juan Eagles.

“Life is such a mystery, sometimes painful, sometimes grand.
When the cards you’re dealt with ain’t winners, you need a helping hand.
Eagles take you up there, across the water blue.
Every day they lift their wings. They fly for me and you.”

“The Eagles don’t want money or fame or all their due.
They only live for gratitude, they want the best for you.
They take their mission seriously, but they surely love to fly.
While helping folks who need to feel the wonder of the sky.”

“When the treatment’s over and doubt’s still laced with fear.
Look back upon the friends you made, high in the atmosphere.
Feel the wings above you, be strong, be sure, be proud.
Be grateful for those precious trips, you made up through the clouds.” 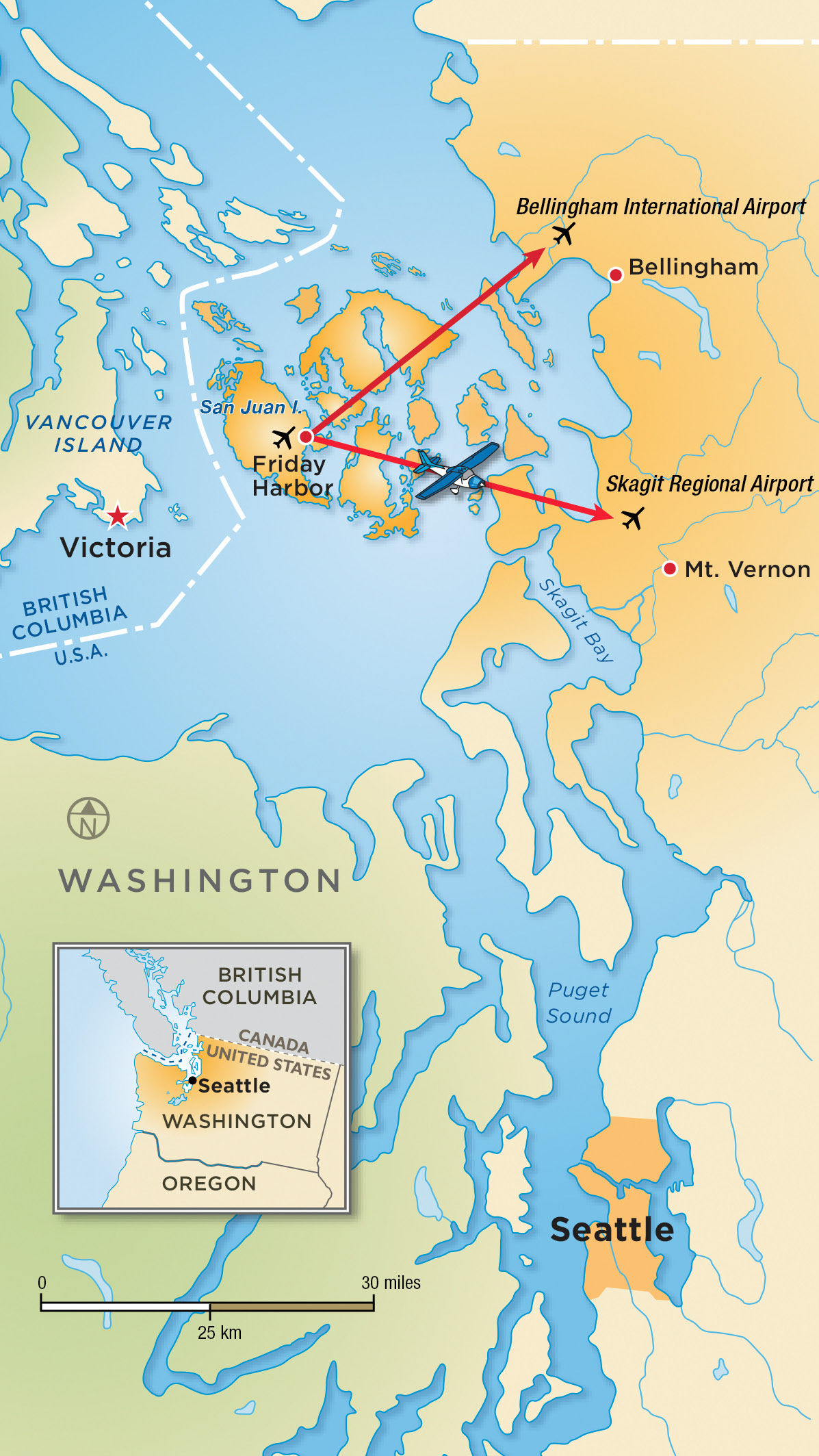 Friday Harbor, Washington, is the largest town on San Juan Island and is an approximately 20-minute flight to Bellingham or Skagit Valley.
Map: Small World Maps

Pilot Vicky Thalacker saw that firsthand when a friend in Friday Harbor, Washington, a town on San Juan Island off the coast of Seattle, was diagnosed with lung cancer. Friday Harbor is the largest town in the San Juan Island chain, comprising 172 named islands and reefs in the Salish Sea. The population of the islands was 15,769 as of the last census, and while the islands range in population from one (on Yellow Island) to 2,500 (Friday Harbor is the county seat), only four have public transportation facilities. San Juan, Orcas, Lopez, and Shaw are supported by the Washington State ferries, and Friday Harbor, Orcas, and Lopez have public airports. There are also many private airstrips throughout the archipelago. In fact, the island has a remarkable number of pilots—more than 200—and novelist Ernest K. Gann made his home in Friday Harbor (he was the author of Fate Is the Hunter and other aviation-themed books).

“This is an aviation mecca,” said Dan Schwartz, president of the San Juan Pilots Association. “We have a tremendous pilot population here and a very active aviation community with more than 100 in our association.”

Thalacker started flying in the late 1970s. She brought her Cessna 172 to San Juan Island when she and her husband, John, a surveyor, moved there. Island hopping and offering scenic flights were her favorite pastimes. When her friend Connie was diagnosed with lung cancer, Thalacker saw the difficulty Connie faced when traveling to her multiple treatments on the mainland. Driving to the ferry, traveling on the ferry (a two-hour sail), driving to the hospital, and coming back ate up nearly a full day.With so many treatments, her friend was doing more traveling than healing, so Thalacker offered to fly Connie in her 172. Later, another friend also was battling cancer and although she did not want to fly, she accepted Thalacker’s offer to drive her for treatments.

“We had a lot of time to talk so I saw how hard it was. The cost was terrible. We live on a beautiful island, but we have no way to do what we have to do to be healthy,” said Thalacker. “She was my inspiration. She helped me see what I should do.”

What Thalacker did was organize—through the local Soroptimist Club and the San Juan Pilots Association—the San Juan Eagles, pilots who volunteer their aircraft, time, fuel, and skills to transport island patients to oncology treatments at medical centers in Bellingham and Mount Vernon, across Puget Sound. At Skagit Regional Airport she enlisted the aid of Corporate Air, and the FBO provided fuel discounts and brought in a new car from Foothills Toyota for patients to use. The courtesy car is always available for either the pilot to drive the patient or the patient to drive him- or herself.

“My husband became a patient. He had 42 treatments [for prostate cancer] and the Eagles flew him for 38 of his treatments,” Thalacker said. “He would leave at noon and be home by two instead of a whole day of travel.”

Although many patients are retired, Thalacker says the experience really helps working people, too. “They can get back and be able to work,” she said. “It’s not just retired people who get cancer.”

Flying in the San Juan islands offers more than beautiful views. The changeable weather, winds, low visibility, and other challenges are tests of the pilot’s skills, but they are tests these local pilots like to take. Thalacker laughed as she said, “These pilots just love to fly.”

Bob Tauscher has been both pilot and patient. He remembers one flight when, as pilot, he told the patient she’d be home within an hour. He calls that the “28-hour” flight.

“I had been flying Joan-Ruth—‘JR’—for the past few weeks to Skagit. It was February 21 and a nice clear morning. This was her last treatment,” Tauscher recalled. “The weatherman called for snow flurries and I looked forward to that because we usually get rain that time of year.”

After her treatment, which lasted about an hour, Tauscher and JR took off and halfway to Friday Harbor met a wall of heavy black overcast down to the ground. They turned back to Skagit, where he had a car, and they drove to the ferry. Because of the weather, the ferry was delayed, and they did not return to Friday Harbor until after 9 p.m. Tauscher made sure JR got to her home but learned from his wife that his home was covered by snow and the hill to his house impassable. So, he rented a motel room in town.

That night he tripped in the room and landed hard on his side. By morning he was in a lot of pain but drove home. Several neighbors came and helped get the car up the drive, but he still had to walk half a mile to his house. He got into his home at 3 p.m.

When the snow cleared, and he was able to get to the clinic, he found he had broken a rib. He was already scheduled to start radiation for prostate cancer but with his broken rib, he couldn’t fly himself. “So, I became the next San Juan Eagles patient,” he said.

Most days are flyable, but if poor weather does cancel a flight, the Soroptimist Club provides backup vouchers for ferry travel.

In the 16 years since Thalacker flew the first flight of the San Juan Eagles, more than 1,400 flights have been made across Puget Sound. Of the 30 pilots who volunteer for the San Juan Eagles, four have made more than 100 flights each. The Eagles average about 200 flights per year. With some radiation and chemotherapy treatments occurring five times a week for several weeks at a time, pilots can get to know their patients/passengers well.

“My most moving memory was the patient I had flown several years ago in late spring. On her last flight home, the sun started to come out and we had a fairly calm, late afternoon, so I asked her if she wanted to circle the island. She said no, but she said she had never seen her house from the air,” said pilot Mike Taylor. “We made maybe three turns over the house, and she just watched it from above…never took her eyes off it. She had the most serene expression, looking down at their family house from above. No outward sign of fear, or of being distraught; she knew the score. After about the third turn she said ‘I’m ready, you can take me home.’ She passed about a week later.

“That single last flight taught me a lot about the dignity of life, was an incredible privilege, and is painted into my memory,” he said. AOPA