Get the app Get the app
We will be performing maintenance on our systems Sunday, 8/21, beginning at 12:00 A.M. ET and ending at 6:00 A.M. ET. During this time, you may experience intermittent service outages. We appreciate your patience.
News & Media Snapped Up

Airlines look to grab pilots from anywhere they can

What do a corporate pilot, flight school owner, and stay-at-home mom all have in common? They are three of the thousands of pilots who have decided to leave the stability of their lives and careers to catch the unprecedented airline hiring wave. 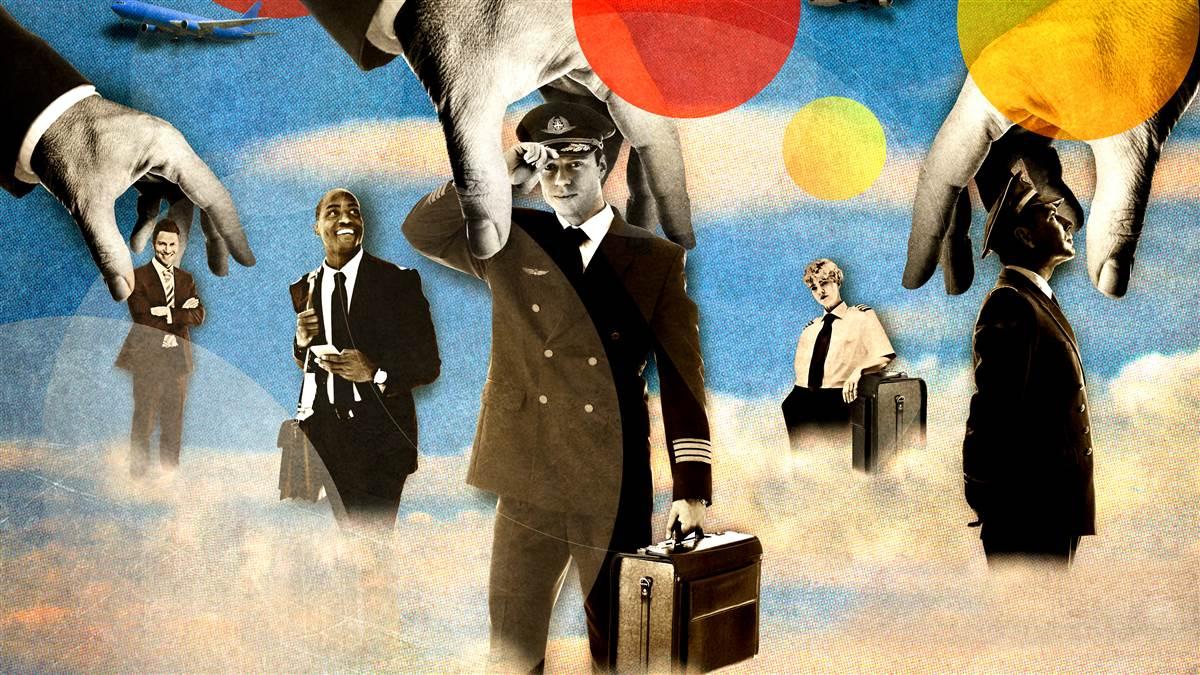 Naysayers immediately disregard talk of massive hiring waves and pilot shortages, but the data is undeniable—airline hiring is occurring at a pace many experts say has never happened in their lifetimes, and its impacts are being felt throughout the world of aviation.

14,000 Estimated shortage of airline pilots by 2026, according to a University of North Dakota studyBoeing estimates that more than 600,000 new professional pilots will be needed worldwide over the next 20 years, including 117,000 in North America. Louis Smith, president of career and financial advisory service Future and Active Pilot Advisors, says that 29,000 pilots at the 11 major U.S. airlines will reach age 65 in the next 10 years—indicating that the major airlines will need nearly 3,000 pilots a year even if the industry doesn’t grow, and not accounting for natural attrition. Of course, the industry is expected to grow, and there is attrition, so the actual number required will be much higher. Add in the regional airlines, corporate flight departments, fractionals, and charter operators, and it’s clear that the help wanted sign will be hanging for years to come. But with fewer than 6,000 new airline transport pilots certificated on average each year, there’s clearly a supply problem. Who will fill the cockpits? 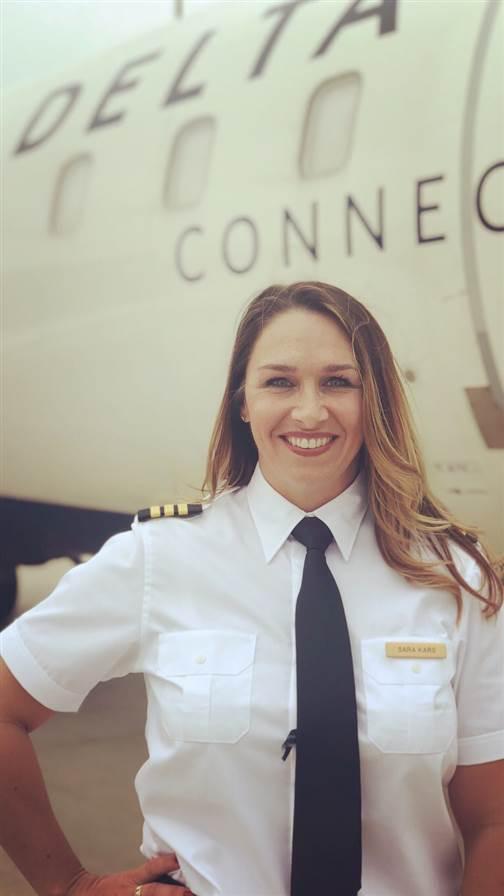 A dream to fly

Sara Karg’s longtime dream of flying isn’t that unusual, but in the world of professional flying, her background is. Karg met her husband in college, had a career as a security analyst, and then decided to stay home and raise their three children. Although at 39 she was not exactly looking for a career outside the home or to make a change, that dream of flight popped up unexpectedly as her kids started to become teenagers. She met a new friend who said he trained people to fly. Researching the hobby she realized it was probably too expensive to be viable, so she looked at flying as a career instead. With no prior training, and without a clear plan as to what type of flying she wanted to do, she launched into the unknown and started training at ATP Flight School in Arizona. A year later she was an instrument flight instructor, and 13 months after that she became a first officer at SkyWest Airlines.

“It was really intense,” Karg said. “It took a lot of sacrifices.” She faced a revolving series of checkrides, and then 13 months of nonstop instructing, some days starting at 3 a.m. to avoid the Arizona heat. Today she’s in training at SkyWest’s facility in Salt Lake City, her first taste of life away from home as an airline pilot.

“As a mom and a female I have a lot of guilt about not being around my kids,” she said. “But I’m also showing them some great life lessons, like going after your dreams.”

Although most people talk about the airline pilot shortage, there are indications that corporate operators are suffering just as badly.

29,000 Pilots who will retire from cockpits at major airlines within the next 10 yearsOne former corporate pilot we spoke to—let’s call him Jim because he asked to remain anonymous—left the glamorous life of flying a Gulfstream G–IV around the world to go work for a small regional airline based in the Northeast. It seems odd to consider an airline pilot job as having more stability and offering more time at home, but to Jim these draws proved more enticing than flying charter. After three years on the Gulfstream flying trips that were generally about three weeks long, and having recently gotten married, he’s looking forward to a predictable schedule and living close to his base. “Airlines are run more efficiently,” he said. “Career progression, pay scale, and benefits are all transparent in the airline. And I like that.” 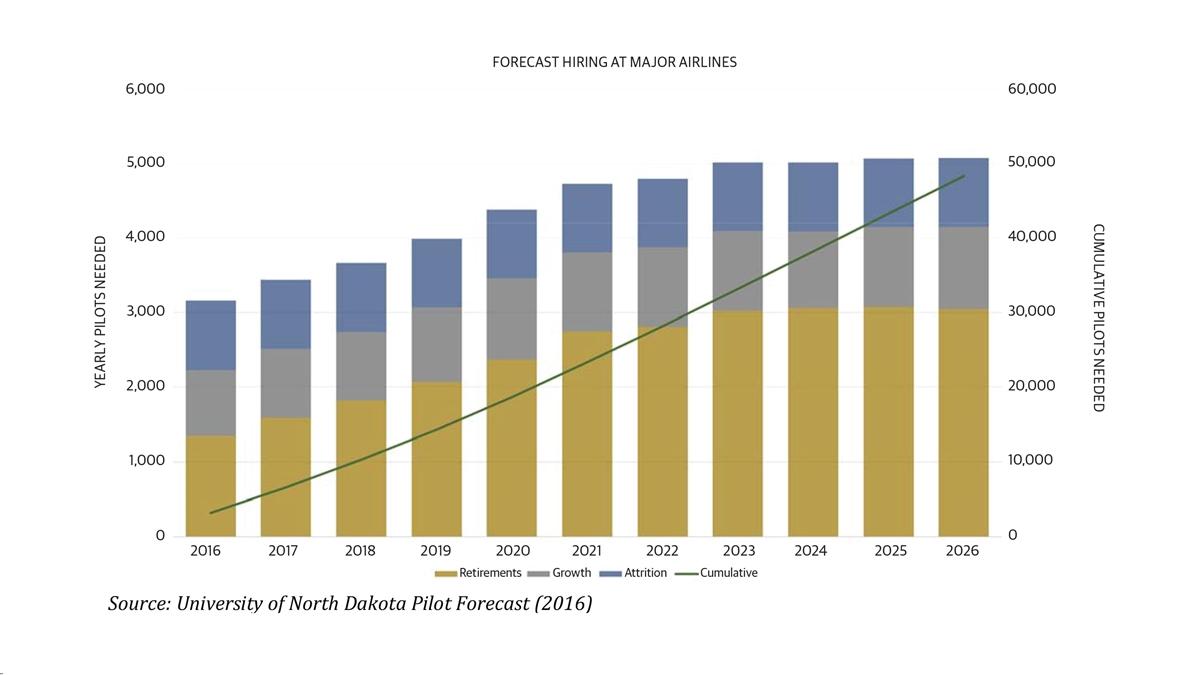 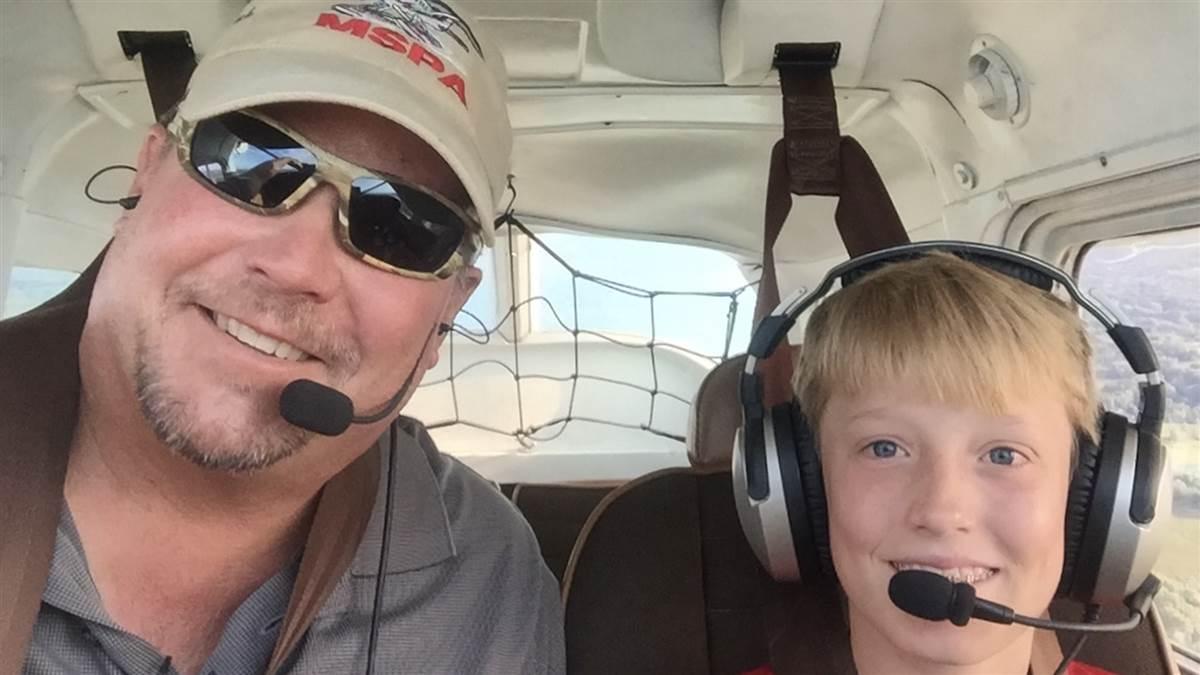 Randy Schoephoerster’s story is remarkable today because it illustrates something that has become so unremarkable. Schoephoerster started at regional carrier Endeavour Air after turning 50. After a long car

eer first as an engineer and then in management, Schoephoerster said he was tired of working nights and weekends, so he quit and started a flight school. Ten years of flying racetracks around the traffic pattern finally got to him, so he was looking for a new challenge. The airlines offered a decent schedule, a stable environment, and challenging flying. “It’s interesting, it’s challenging, and it’s something new for me,” he said.

Just a few short years ago, dropping tens of thousands of dollars on flight training as an investment for an airline career seemed like a risky proposition. College aviation programs were closing because they couldn’t place graduates, the airlines were furloughing, and the increase in the mandatory retirement age to 65 in 2007 had effectively shut off hiring at the major airlines for five years. Now those pilots are starting to age out again, the economy is growing, and the 1,500-hour rule requiring an airline transport pilot certificate for airline first officers has slowed the candidate pool. The result is stories about airlines parking airplanes for lack of crews, rising wages, and signs of a true labor shortage.

111 Airports that have lost at least 50 percent of their airline service level since 2013FAPA’s Smith has been tracking hiring at the major airlines for more than 40 years, and although he sees a rapid pace of hiring, he cautions against using the “S” word. “It’s important to define a labor shortage. FAPA considers it a shortage when employers pay for training to help applicants become minimally qualified. The major airlines are developing programs providing a path, but so far the applicant pays the fees, indicating no shortage in that sector,” he said.

Yet everywhere you look, the signs of a strong job market are there. Most regionals are offering some sort of signing bonus or incentive. SkyWest helped pay Karg’s loan while she was instructing, for example. Jim’s experience with the interview and selection process is a clear indicator of how competitive the market has become—for the airlines. He received a phone call to schedule an interview mere hours after submitting his résumé. The next call was a phone interview, and many pilots are hired soon after a few other screenings. “The floodgates are open to the major airlines right now,” he said.

117,000 New pilots who will be required in North America over the next 20 years, according to BoeingDespite the persistent talk of wage growth being a key factor for increasing regional airline recruitment, none of the pilots we spoke to for this story listed pay as a primary consideration in choosing their airline. Karg didn’t know exactly what she was going to be paid, and Schoephoerster said it was simply enough to pay his bills. So long as the pay was livable and fair, the most important for each was quality of life and upgrade time.

Karg wanted to be close to home, and although she’ll have to commute to either Detroit or Minneapolis for a few months, her home base of Phoenix should be available soon. Jim should be based at home soon, and Schoephoerster said he had no interest in the crash-pad life The draw of being close to home is so big for each that even a quick path to the major airlines was less important than base selection.

When companies compete, you win

By some estimates the airlines are hiring more pilots today than are being generated through career-track programs. And that means poaching.

Despite good money, incredible equipment, and the prospect of living close to home, many corporate flight departments and charter operators are struggling to find pilots. Jim is a prime example. The gig he landed flying right seat in a G–IV was his first professional flying job, something that would have been unheard of just a few years ago. One charter company in Maryland has taken the airline model and is offering $80,000 recruitment and retention bonuses for pilots to fly Embraer Phenom 300s.

If corporate flight departments are hurting so badly it makes sense that flight schools are feeling the pain the most. The Government Accountability Office recently released a report that said 16 of 18 collegiate aviation programs interviewed noted a lack of qualified flight instructors as their biggest challenge. The industry is quickly hurtling toward a perfect storm where the airlines need more pilots, so they take CFIs, and their need for pilots creates a need to train more people off the street, which requires...more CFIs. —IJT

Staying close to home and avoiding a commute can be a good decision, especially for those with a family. Often requiring an additional period of time at the front and back of a trip, commuting also relies on airlines having available seats, something that has become harder to find in recent years. Smith said load factors have gone from 55 percent to 85 percent over the past 40 years, making the bet of finding an open seat that much more risky.

For the airlines to remain solvent and retain the ability to serve smaller communities, they will have to increase pay and benefits, as well as support the development of training. If the makeup of Jim’s class is any indication, airlines will draw from several sources, including active general aviation pilots. “It’s a very eclectic bunch in these classes right now,” he said. “There are young CFIs, but also charter captains and pilots from other airlines making a lateral move.”

Airline members of the Regional Airline Association are most at risk. By their estimate, nearly three-quarters of their aircraft could be without crews within the next eight years if the population of professional pilots doesn’t grow. The group’s president, Faye Malarkey Black, thinks her members have been on the “leading edge” of partnerships with universities to provide a clear path to the cockpit, but that the challenge is simply too big for the airlines to solve by themselves. “These market-based solutions are compelling and help to spark interest, but cannot alone resolve what is fundamentally an underlying policy problem where the career path is inaccessible for most Americans. With tuition and hours-building requirements reaching $200,000, most Americans cannot access this lucrative career,” she said. Black said proposals offering a more direct investment in training, combined with a restricted ATP that focuses on quality of experience, have been met with political resistance and claims of unsae practices.

How long the boom times for pilots will continue is at this point still a guess. Airlines have for decades had a cyclical ebb and flow of hiring, and many argue this time is no different. Black said she doesn’t see an end to the shortage in part because, “we’ll need thousands of new pilots every year for the foreseeable future just to tread water.” And even Smith, who has a pilot’s skeptical eye on the market, agrees that things look good for someone coming into the profession today. “An economic recession would certainly reduce the hiring, but it would be difficult for the airlines to furlough off the bottom with so many leaving at the top of the seniority list,” he said.

If they can entice a stay-at-home mom to jump into a new career, a happy corporate pilot to leave a lavish life, and a successful flight school owner to step out, it’s clear the airlines have retaken their place at the pinnacle of professional flying.