Remarking that Robert J. Collier bought the first personal aircraft from the Wright brothers, Dale Klapmeier accepted the trophy in his name honoring the Cirrus Vision Jet as the first personal jet at the Ritz-Carlton in Washington, D.C., June 14. “The Collier award is more than just aviation history, it’s American history,” said Klapmeier, co-founder and CEO of Cirrus Aircraft. 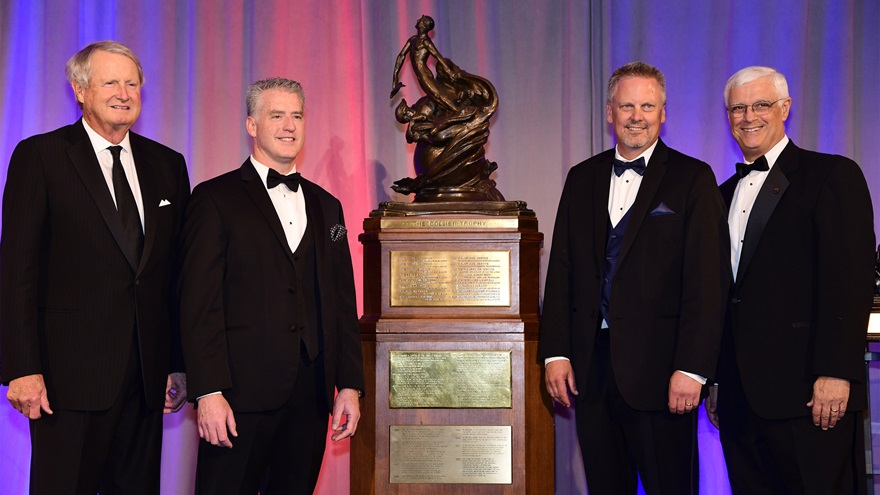 The Collier trophy is awarded annually “for the greatest achievement in aeronautics or astronautics in America, with respect to improving the performance, efficiency, and safety of air or space vehicles, the value of which has been thoroughly demonstrated by actual use during the preceding year.” Robert J. Collier was an aviator, humanitarian, and sportsman who commissioned the trophy in 1910 to encourage aviation in America. He was the first person to purchase an airplane for personal use. His family created the Collier's Weekly magazine.

National Aeronautic Association (NAA) President Greg Principato quipped that Klapmeier could not take the Collier trophy through Washington, D.C., on a victory tour much like the Washington Capitals, winners of the Stanley Cup, had done earlier in June. Klapmeier brought many of the Cirrus staff from Duluth, Minnesota, to the Washington, D.C. gala. The 525-pound trophy is on permanent display at the Smithsonian Institution’s National Air and Space Museum and is taken out only for this event. Recipients are given a miniature version of the trophy.

Cirrus was chosen for the 2017 Robert J. Collier Trophy for “designing, certifying, and entering into service the Vision Jet, the world’s first single-engine general aviation personal jet, and implementing a whole airframe parachute system for the aircraft.”

“This is a big deal,” said Jim Albaugh, chairman of NAA. “Getting things flying seems like magic, but it’s just plain hard work. With respect to the astronauts in the room, certifying an airplane is harder than getting to space.”

The Vision Jet received FAA certification in 2016 and “ushered in a new era of personal aviation.” Founded in 1984 by brothers Dale and Alan Klapmeier, the company is noted for safety and innovation, including the first FAA-certified whole-frame parachute safety system as standard equipment on an aircraft. To date, the Cirrus Airframe Parachute System (CAPS) has passed 9 million hours, and 153 people have been saved using the system.

“We call it the Vision Jet because it truly is visionary,” said Klapmeier, thanking his brother Alan for being a “true visionary.” He also acknowledged the work of the entire team at Cirrus, especially Scott D. Anderson, the late CAPS test pilot who “grabbed that handle and pulled the chute for the first time.”