Get the app Get the app
Get the latest news on coronavirus impacts on general aviation, including what AOPA is doing to protect GA, event cancellations, advice for pilots to protect themselves, and more. Read More
Already a member? Please login below for an enhanced experience. Not a member? Join today
News & Videos Rotorcraft pilot, mechanic shortfalls quantified

Who’s forecasting the supply of future helicopter pilots and mechanics? “There’s a large focus around the world on the pilot shortage issue—there’s very little talk on the mechanic shortages,” said Dr. Beth Bjerke of the University of North Dakota. And there’s been little attention specifically on the rotorcraft segment, she added. “We have a helicopter program at UND and want to understand where the market is going.” 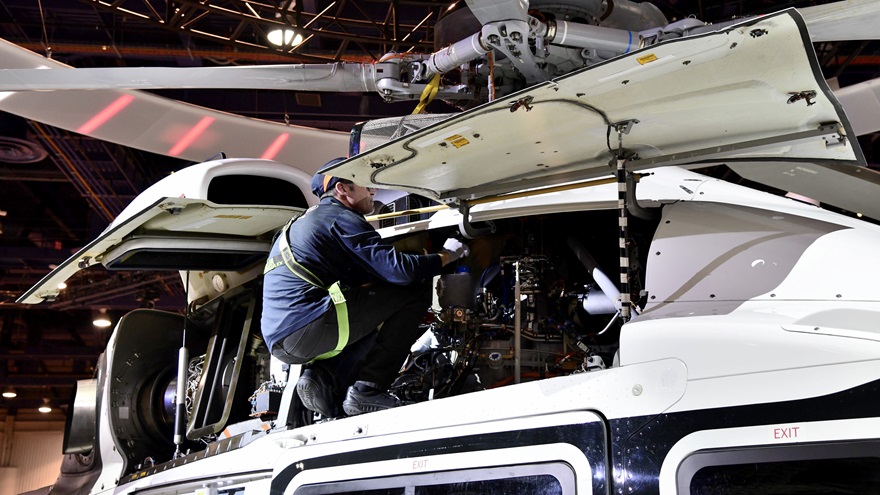 An Airbus Helicopters technician demonstrates how easily maintenance can be performed on the company's new H160. Demonstrations were conducted daily at HAI Heli-Expo 2018. Photo by Mike Collins.

“On the mechanic side, it’s much more concerning,” she said. Their research projects a shortage of 40,613 certificated aviation mechanics over the 18-year period. “Sixty-seven percent of operators are reporting that it’s more difficult to hire mechanics today.” This portion of the research looked at A&P mechanics overall, because the certificate does not provide a means to differentiate between rotorcraft and fixed-wing airplanes, or other specializations. Similar trends are reported internationally, Bjerke said, and the anticipated aggressive expansion of aviation in China—which operates only about 1,000 helicopters today—could seriously exacerbate the situation.

Although pilot and mechanic shortages have been discussed, and the aviation industry has taken steps to improve pilot recruitment and retention, little is being done about the mechanic shortage, she said.

The “poaching” of pilots—in the same way that major airlines recruit pilots from regional carriers—is an issue within the helicopter industry. “A lot of helicopter operators that have a need for high levels of experience have been ‘poaching’ from smaller operators,” Bjerke explained. Larger companies might offer higher salaries or better incentive packages. And one of the industry’s real challenges is that there are a lot of jobs that require a high level of experience—but a major deficit of jobs in which pilots can build that experience, she added.

Companies should do what Part 121 carriers are doing. “Invest in training and retraining of experienced helicopter pilots and mechanics,” she said.

“Our industry needs to take a hard look at how we do things,” said HAI President Matt Zuccaro. “We really don’t have a choice. These numbers show a future where the growth of our industry will be curtailed because operators won’t have the workforce they need. But we have the option to change that future by acting proactively now to recruit the next generation of pilots and maintainers.”

Helicopter Foundation International, which funded the study, is sharing an executive summary and the study results.