Guessing when your drone will die

Every unmanned aircraft contains several mission-critical parts and components, the failure of any one of which would likely cause a crash. Predicting and preventing such failure with proactive maintenance depends on data, and a former U.S. Navy pilot and engineer has created a tool to compile the numbers and found that the actual longevity of some parts might surprise you (not in a good way). 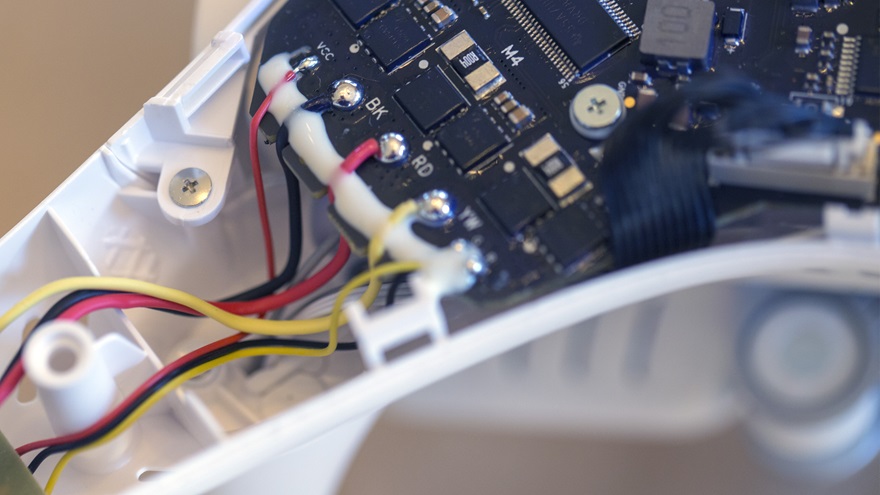 Drones contain many parts and components that are critical to flight, and the failure of any of these could bring down the aircraft. The wires connecting each motor are one example of a single point of failure, along with the motors, electronic speed controllers, and propellers. Jim Moore photo.

For one example, the DJI Inspire 1 remains one of the most popular unmanned aircraft systems on the market for photography and videography, and, like all quadcopters, it relies on four motors, each with its own electronic speed controller, wiring to connect those components to the rest of the system, and a propeller, all of which represent single points of potential failure. Each electric motor is indispensable—the aircraft will fall out of control if any motor fails in flight—and few of the many such motors tracked to date have demonstrated longevity beyond 200 hours, on average requiring replacement after about 30 or 40 hours of flight time, said Tony Pucciarella, director of operations at the University of Maryland’s UAS Test Site and the founder of AlarisPro, an online service for unmanned aircraft fleet management and predictive maintenance.

Over the past four years, AlarisPro has accumulated data from users that offers insight into how long critical components can be expected to last, about 100,000 hours of component flight time and counting across a range of brands and models.

“We have seen a lot of motors fail,” Pucciarella said.

AlarisPro is in essence a database management tool, but the value to users goes beyond the simple, easy-to-use interface (which Pucciarella demonstrated in an online presentation for AOPA) with which a pilot can log a flight in a few seconds. By tracking the time clocked on each component in the system, and when each component fails, or is replaced for other reasons, AlarisPro has created a tool that mimics many of the practices that have for decades enhanced safety in manned aviation by offering aircraft owners, maintainers, and pilots insight into the life limits of key components. What takes the system created by Pucciarella and a small staff of about half a dozen beyond simple maintenance tracking and flight logging is the crowdsourcing element: Customer-reported issues with particular systems or components may reveal maintenance issues relevant to all operators of a particular model, and that information can be shared among all users, as well as with manufacturers to drive recommendations and, in some cases, design changes to improve reliability. 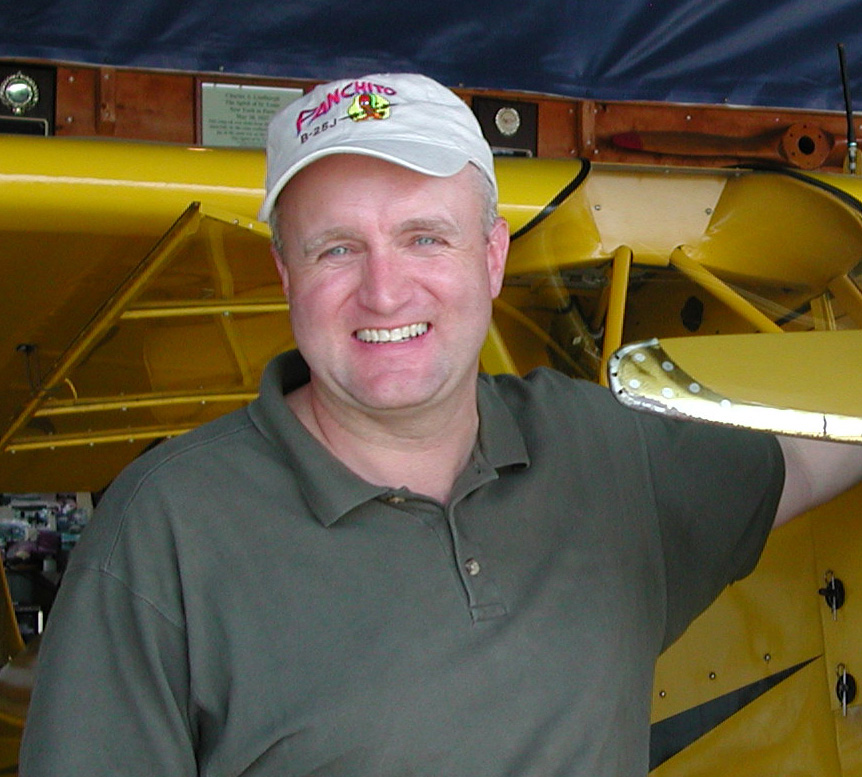 Manufacturer-recommended maintenance intervals and estimates have been integrated, though many unknowns remain about just when particular components might be expected to fail over time. It remains to be demonstrated just how many of the electric motors used by the Inspire (and other multirotor systems) will reach 200 hours of service life, or beyond.

“We’re in the data collection mode right now,” Pucciarella said, noting that the data collected so far suggests that the motors used by one of DJI’s larger systems, the S1000, may last longer. “Those numbers are coming in really good… some close to the 200-hour mark.”

Manned aircraft powerplants are tested much more extensively before an aircraft can be certified, and there is a much larger data set from which to determine mean time between failures, a concept well understood in traditional aviation. Pucciarella said that when a piston engine reaches its time between overhaul interval, that does not mean it has to immediately be taken out of service. He has owned such aircraft, and coaxed additional hours out of them with careful monitoring of engine oil analyses, and internal inspections with a borescope to confirm that failure was not, in fact, imminent. Unmanned aircraft owners can take similar action, visually inspecting high-time motors, looking carefully for signs of discoloration in the copper windings, and also giving the motors a good, old-fashioned sniff before flight.

“If a motor is starting to burn, you’ll start to smell it,” Pucciarella said.

With log entries following each flight, and each maintenance activity, details and expectations begin to become clear, both for the history of a particular aircraft and system, and for all aircraft of a given model flown by AlarisPro users. AlarisPro is manufacturer-agnostic, in that while it offers a number of pre-configured aircraft templates, including dozens of components for each system, users also can create their own. Over time, a detailed maintenance history emerges that can give individual pilots, flight departments, and the wider community of users insight into which components might be causing issues, and when components or systems might be expected to fail. It’s an approach very familiar to Pucciarella, who, as a Navy engineer and pilot, served as fleet production lead delivering the Gulfstream V to the Navy for VIP transport, and also served as the airspace certification lead for the MQ-4C Triton unmanned aircraft.

Pucciarella said he founded AlarisPro in part to bring the disciplined and meticulously documented approach to aviation maintenance long since established in manned aviation to the unmanned world, along with the safety culture. He looks at unmanned aircraft, particularly multirotor platforms, and sees a collection of vulnerabilities. A quadcopter (of any brand) has “basically got a flying mess of single-point failures. The more we can understand where the single-point failures are… the better we can break the chain. The problem is, in the unmanned industry, people aren’t thinking like that.”

Pucciarella said it does not take long for those without prior aviation experience to appreciate the value of detailed maintenance tracking and flight logging, and those who come to unmanned aircraft from a manned aviation background already understand the value of this data-driven approach.

Alaris Pro offers service plans starting at $15.99 per month (discounted with a one-year subscription), offering flight and maintenance logging, alerts and reminders, a personalized dashboard, and the ability to export and back up data. Additional features come with the premium plan ($59.99 per month, also discounted with an annual subscription), including advanced reports and eligibility for AlarisPro certification.

While data collection is not automated, Pucciarella and his team have refined the interface so it takes “about six seconds to log a flight,” and over time that adds up to a great deal of insight, particularly when anonymized data is shared with the rest of the community. 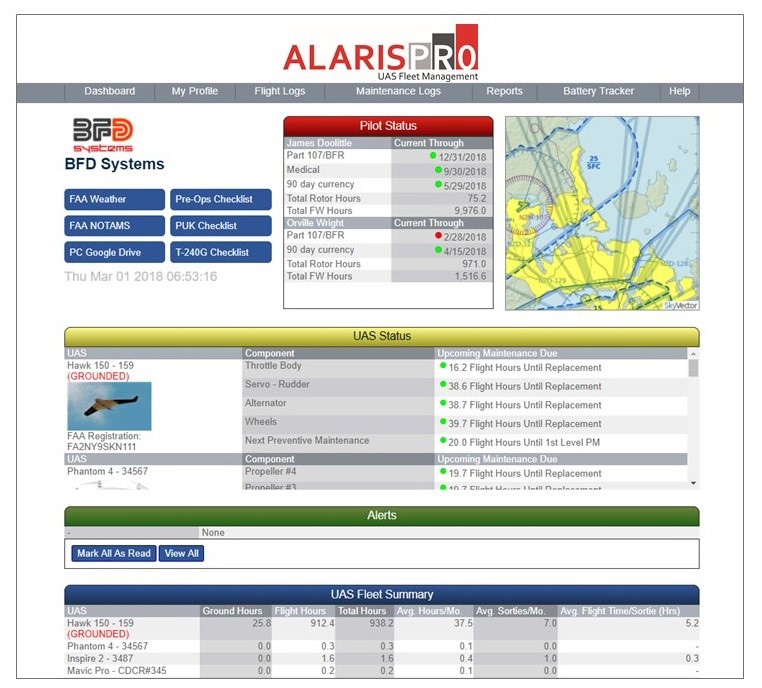 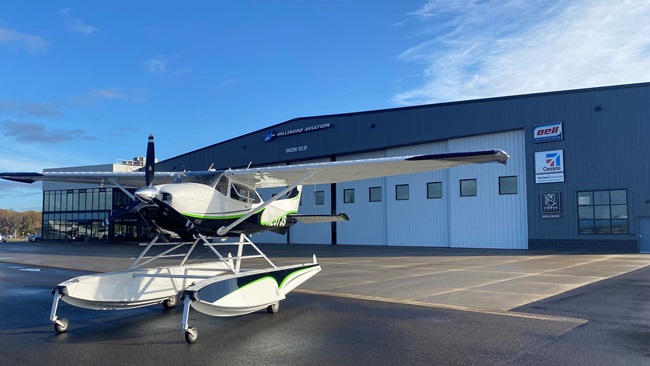