Get the app Get the app
Already a member? Please login below for an enhanced experience. Not a member? Join today
News & Media Pilot, actor Harrison Ford ‘humbled’ by Hoover Trophy

AOPA President Mark Baker noted that the trophy is presented to an “aviator who exhibits the airmanship, leadership, and passion for aviation and life demonstrated by Bob Hoover.”

The Hollywood fixture and Golden Globe winner was lauded for his unwavering enthusiasm and dedication to aviation. Ford has rescued a stranded hiker with his helicopter, flown the 2 millionth EAA Young Eagle in his yellow-and-green de Havilland Beaver, and testified before Congress on behalf of airports. He was also one of the key figures in AOPA's GA Serves America campaign.

The instrument-rated fixed-wing and helicopter pilot, aircraft owner, and longtime AOPA member said the recognition was a “great honor, but it’s embarrassing to be here” surrounded by other aviation luminaries, including Tucker, who founded the Bob Hoover Academy in Salinas, California, an after-school program that teaches disadvantaged youth about aviation.

Ford’s acceptance speech was a platform that highlighted the “metaphor of flight to create social justice” through the Hoover Academy, and he expressed admiration for Tucker’s program that was established in an area known for a high percentage of youth homicides. 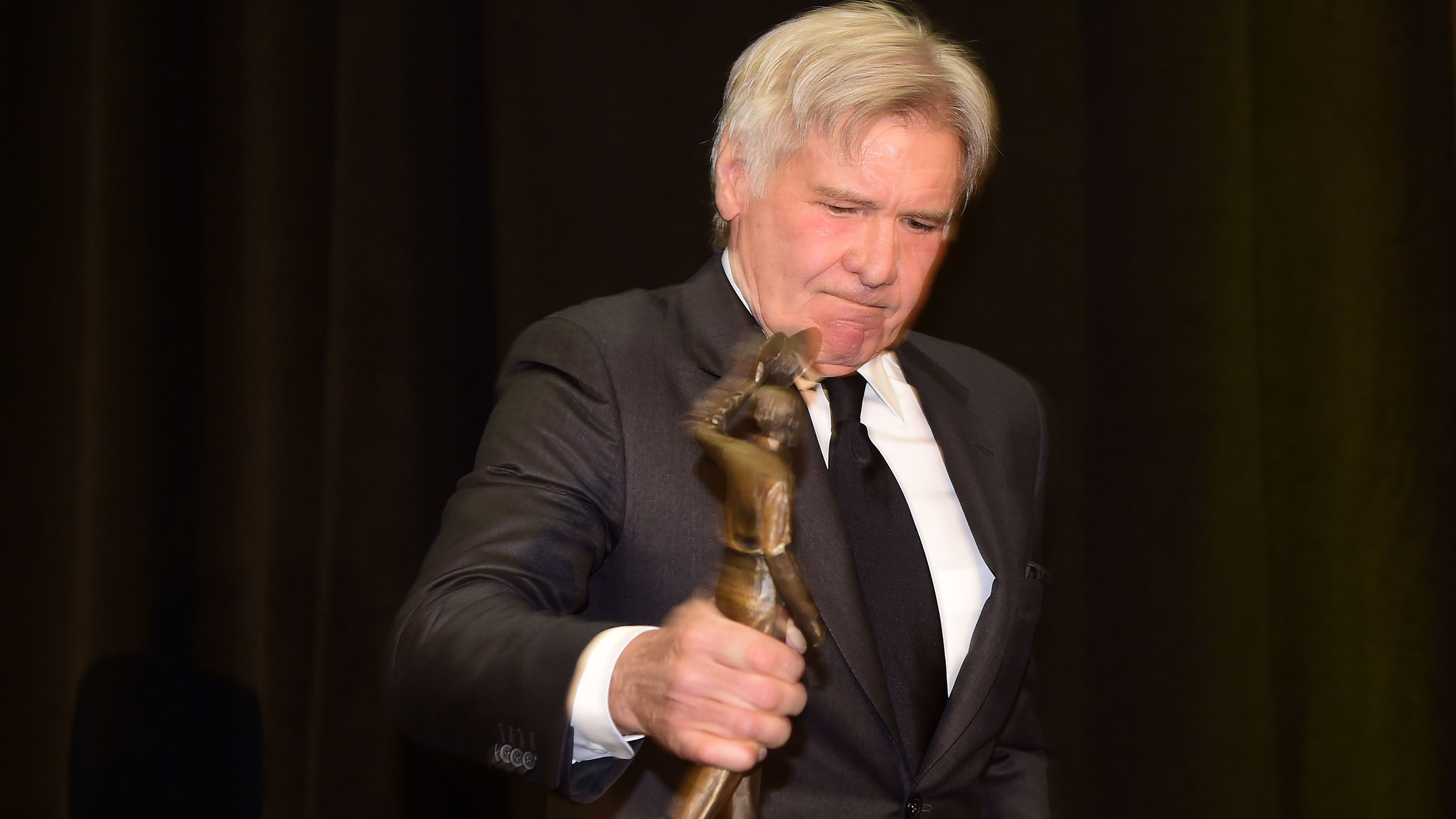 The academy introduces aviation careers to youth who might not have considered it as a career path. “It’s an amazing thing to see,” said Ford. He added that “aviation can be used to save lives.”

An equally impassioned Tucker recalled “how much Bob loved and respected you, Harrison.”

Hoover agreed in 2016 to have his name memorialized as a tribute to those whose airmanship, leadership, mentorship, and passion for aviation inspires a love of flight. The showman died in 2016 at age 94 after an illustrious aviation career, and his videotaped message to introduce the honorees appeared to be an emotional moment for both Ford and Tucker. 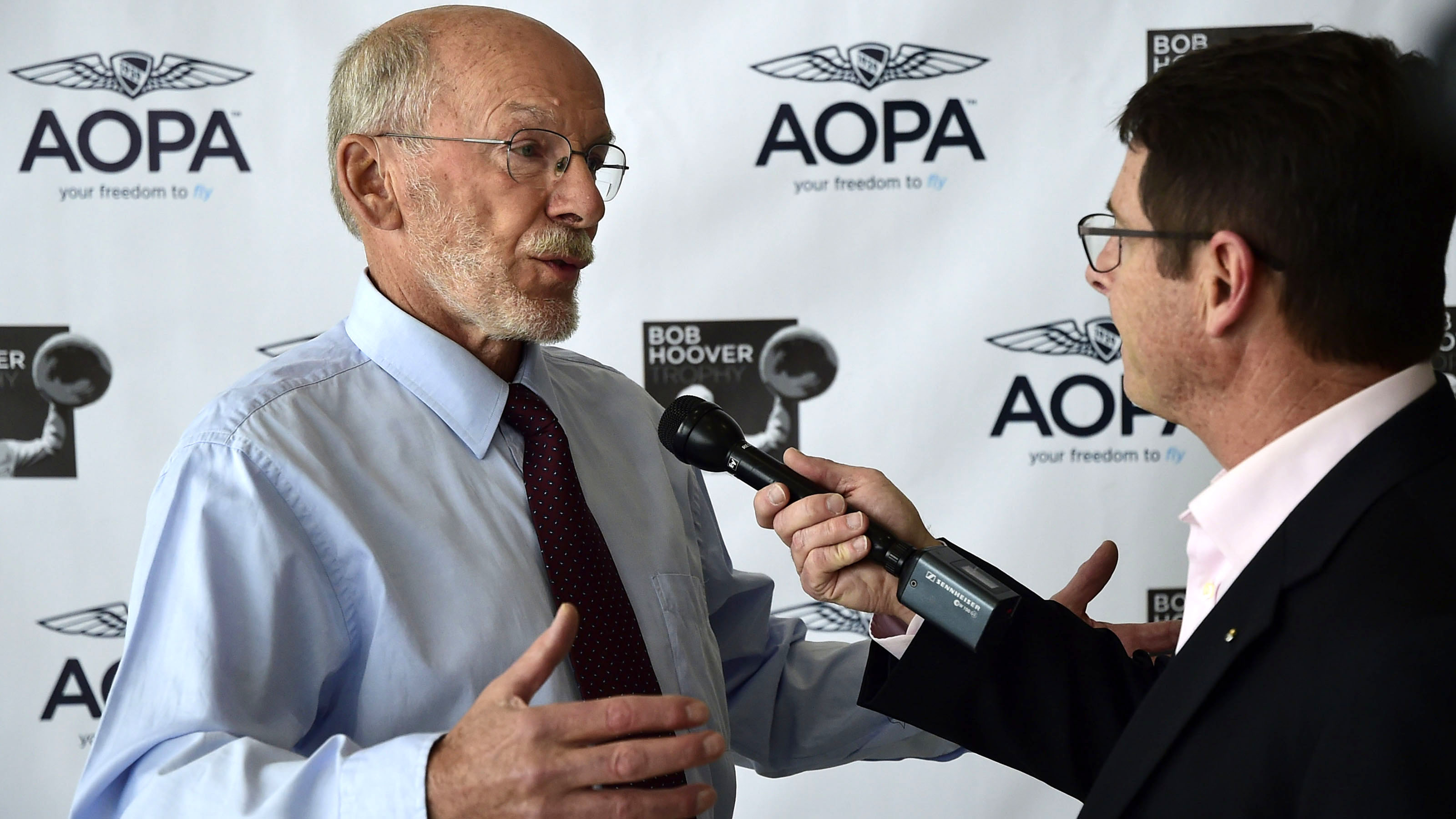 Dearborn explained that the “Sharples Award recognizes many partnerships” including building relationships with the airport and with the FAA. “All of our successes have been based on relationships,” he added. The award was named for AOPA’s first chairman of the board, Laurence P. Sharples, and recognizes those who don’t work directly in aviation but have made “extraordinary contributions” to GA.

AOPA presented additional awards to lawmakers and individuals who have contributed to the aviation community.

The Joseph B. “Doc” Hartranft Jr. Award, named for AOPA’s first president, was presented to Reps. Steve Russell (R-Okla.) and Ralph Abraham (R-La.) for their leadership and support of GA in Congress. Baker thanked the representatives who “spoke out on behalf of general aviation in the fight against so-called privatization when it mattered most.”

Russell said he began his “journey to fly” a year and a half ago and quickly realized the challenges of an aviation industry that served all types of aviators—both GA and commercial pilots. “Airspace belongs to ‘We, the people’—it doesn’t belong to anybody else,” he said.

Abraham concurred, adding, “It takes a village and Steve and I are proud to be part of that village.” He was referring to the battle to divest air traffic control from the FAA, which failed on Capitol Hill. He said, “It was a fight and thankfully, we prevailed.”

AOPA also presented Freedom to Fly Awards to four dozen members of Congress for their dedication to preserving GA.

During his remarks, Ford summed up the freedom of flight in the United States as “a legacy” that was “particularly American.” He closed by saying, “We have a responsibility to provide safe aviation for all future aviators. God bless America.”