Get the app Get the app
Get the latest news on coronavirus impacts on general aviation, including what AOPA is doing to protect GA, event cancellations, advice for pilots to protect themselves, and more. Read More
Already a member? Please login below for an enhanced experience. Not a member? Join today
News & Videos Cirrus transition training: Jumping from the SR22 to the Vision Jet

Jay Jolley waited 5,003 days to get his new Cirrus SF50 Vision Jet, and it might take him longer than that, if ever, to quit grinning every time he talks about his transition to the revolutionary personal jet. 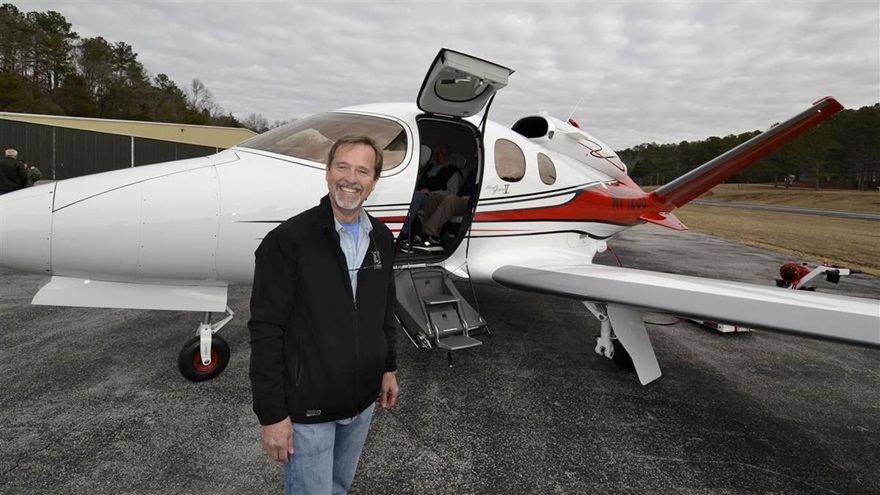 "It was worth the wait, and I’ve probably developed a few new wrinkles from smiling so much," Jolley said.

Jolley, 57, could be a poster child for Cirrus aircraft ownership. Over a period of 14 years, he has owned a series of four piston-powered Cirrus SR22s; when he placed a deposit for the jet in October 2006, he had confidence in the company’s ability to successfully certify the new aircraft from scratch.

However, his patience was tested by a 10-year wait, and he said learning to fly the jet would have been easier at a younger age. "It helped my transition that the position of many of the controls in the jet are similar to my piston-engine Cirrus," added Jolley.

The revolutionary new single-engine, V-tail Cirrus Jet was certified on Oct. 31, 2016, 10 years after Jolley placed his order for the clean-sheet design, and he took delivery of serial number 29 in December 2017.

Although many new owners continue to employ a mentor pilot after earning their type rating, Jolley had the distinction of being the first private owner to fly home solo after taking delivery of a Cirrus Jet from the Duluth factory.

Based at the Collegedale Municipal Airport in Tennessee near Chattanooga, Jolley recently spoke to EAA Chapter 150's regular monthly meeting about his journey to becoming a jet pilot. A record crowd came to hear Jolley’s presentation, which concluded with a demo flight for three lucky chapter members. 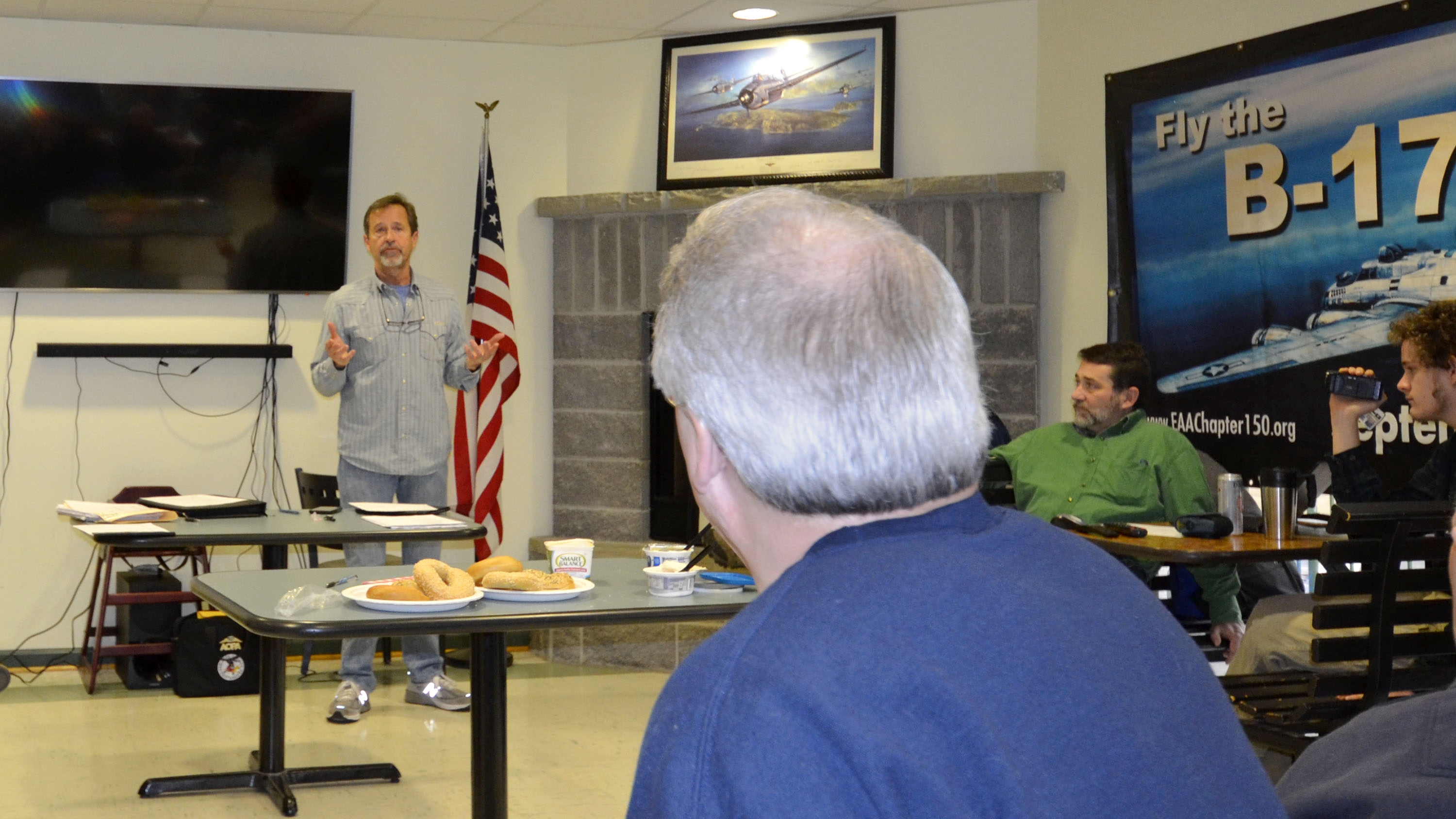 His presentation started with a couple of videos provided by the factory. Although not required for FAA certification, Cirrus chose to conduct an actual flight test of its unique whole-plane parachute system. After the chute was successfully deployed, the factory test pilot activated a system to cut it away so he could land normally.

If the jet is going too fast when the pilot activates the system, the autopilot takes over and slows the aircraft to the appropriate airspeed (below the lesser of 135 KIAS or 145 KTAS) for a successful deployment from a nose compartment. The parachute answers most concerns about the Cirrus being a single-engine design, as does the realization that the jet can glide 56 miles if the engine is lost during the cruise phase at Fight Level 280.

"Although Cirrus advertises the Vision Jet as easy to fly, the systems are complex and extensive ground training and flight experience are required prior to an FAA checkride," said Jolley.

"The factory starts the transition process with a flight in an SR22 to assess the skills of the prospective jet pilot, followed by training in the Garmin Perspective Touch avionics, a week of ground school, experience in a simulator and, finally, five days in the Vision Jet with a Cirrus instructor," said Jolley.

After his training was complete, another Cirrus factory instructor flew with Jolley to confirm his readiness for the FAA checkride, which is conducted to ATP standards.

He was required to hold altitude within 100 feet and airspeed within 5 knots, plus or minus. A two-hour oral was followed by a flight that included maneuvers, emergency procedures, and numerous precision and nonprecision approaches flown both by hand and with the autopilot.

"I passed the ride, but it took me three to four weeks to decompress," said Jolley, obviously relieved to have that hurdle behind him.

After a successful checkride, Cirrus requires that every new jet pilot complete real-world training with a mentor pilot, which typically takes an entire week for the syllabus of exercises, environments, situations, and events. “We flew all over the country,” added Jolley, “including a trip to California, and Cirrus calls this the Victory Tour.”

"Although Cirrus makes the slowest jet on the market, learning to fly the plane is all about speed management. I began writing down my errors during the transition, and the only error I've repeated relates to speed in the descent," he added. "At a typical cruise altitude of 27,000 feet or 28,000 feet, true airspeed will average 305 to 310 knots (Mach .51) and you’d better pull the power off before pointing the nose down for descent or you’ll bust the 250 KIAS VMO limitation and will certainly exceed the 200 KIAS speed limit below airspace layers."

It helps that the trailing link landing gear can be extended at 210 knots and approaches can be flown comfortably at 180 knots if needed by ATC.

With a full-fuel range of 1,300 miles, the jet has a zero-fuel weight limit of 1,165 pounds of passengers and luggage, double that of an SR22.

Jolley demonstrated the jet's capabilities with a quick (under four hours total flight time) round trip from Chattanooga to the recent Sport Aviation Expo in Sebring, Florida.  With four adults on board, light luggage, and plenty of fuel, we were safely within the loading envelope that Jolley pulled up on one of the large screens of the Garmin avionics suite.

An iPad Vision Pro Flite Jet flight planning app is also available to easily figure weight-and-balance scenarios and takeoff distances at various weights and temperatures. Lightly loaded on a cool day, Jolley figured he needs at least 1,800 feet of runway, whereas hot and heavy can require well over 3,000 feet. Rotation speed is 90 knots.

The cabin is extremely roomy, with lots of leg room, and the large windshield and side windows allow a panoramic view. One of my fellow passengers commented that it's like riding in a large SUV. Cirrus designed the Vision Jet with flexible seating configurations, which the pilot can easily optimize for each mission.

It's said that you will never want to go back to a piston-engine airplane once you experience a smooth, vibration-free flight in a jet, and I can confirm that sentiment. 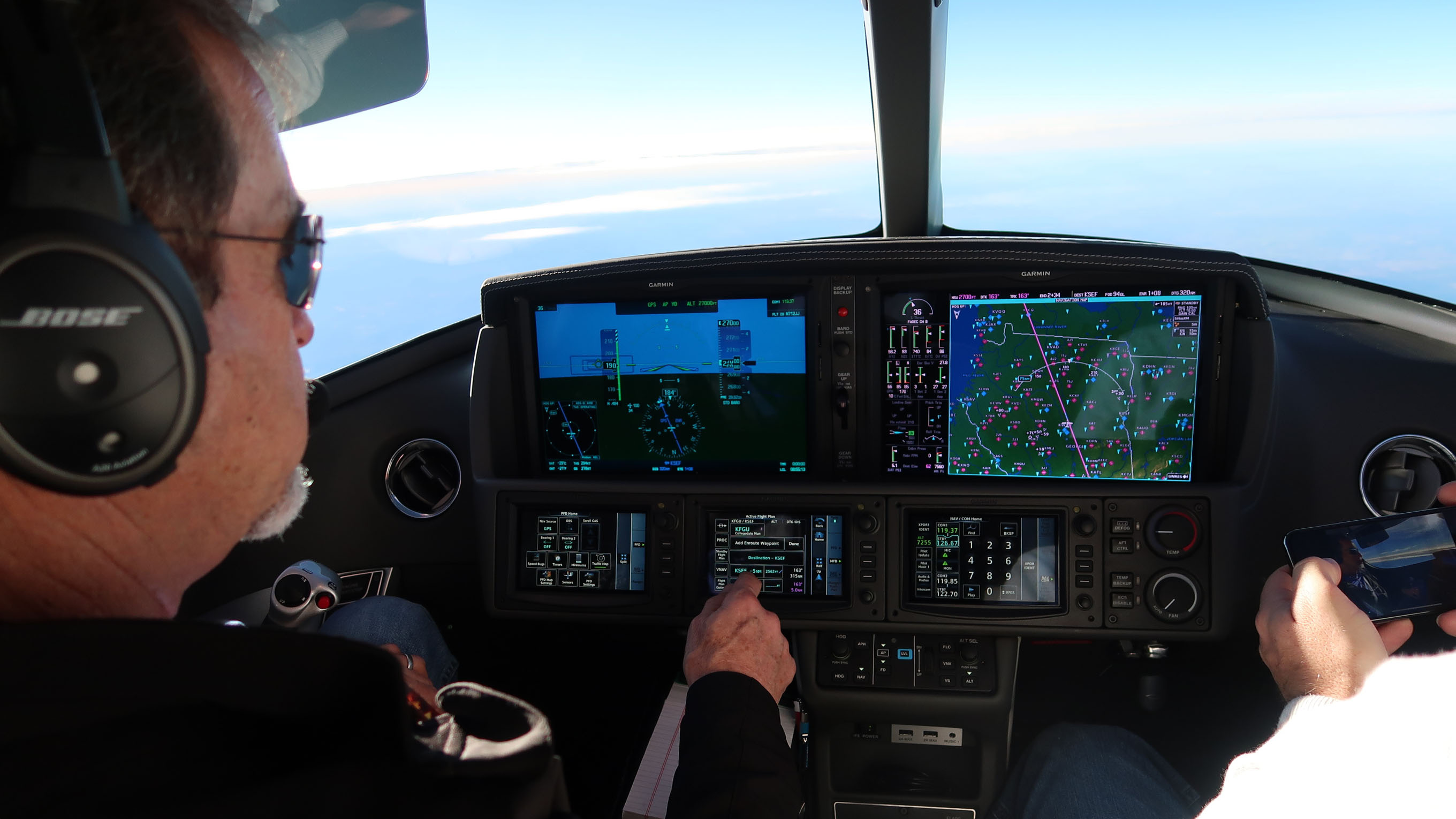 Certified for flight into known ice, the wings of the Cirrus Vision Jet are equipped with pneumatic deice boots, whereas the nose and windshield have TKS anti-ice protection.

With a branch office in Dallas and a daughter at Baylor University in Waco, the Lone Star state is a regular destination for Jolley, who heads a large construction company. To complete the round trip, the jet typically takes one-third less time than the turbonormalized SR22T he traded in.

The quiet, roomy, pressurized cabin allows everyone to arrive with a fresh state of mind. Monster tailwinds at the flight levels can make a huge difference in flight times, and Jolley is proud to report that he holds the Cirrus Jet speed record of 418 knots across the ground in level flight.

With about 600 customers in line to get a Cirrus Jet, Jolley says there is an active market in delivery positions now that the aircraft is certified and proven successful. "I was offered a good sum of money for my early delivery position, which was 24. The lowest position currently for sale is 61."

To enhance future resale value, Jolley ordered almost every option Cirrus offers, including an extended baggage compartment perfect for skis or golf clubs, and he expects the optional flip-down 19-inch video screen to be popular with rear seat passengers.

When the subject of ownership cost comes up, Jolley says owning a jet is a "fast way spend a lot of money." To nail down his operating costs, he opted for the Concierge Package offered by Cirrus, which covers all maintenance and wear items.

He has found the factory to be very responsive to the maintenance squawks that are always part of owning a new aircraft. As an example, a sensor malfunctioned during our Florida flight and the factory fixed it the next morning. "It's great that the new Cirrus delivery and service center is nearby in Knoxville, Tennessee," Jolley added.

The Cirrus' Williams engine burns between 70 and 75 gph of Jet A, and Jolley said fuel prices vary greatly across the country. "I paid anywhere from $2.50 to $7 per gallon during my training flights, and I figure the plane costs $1,000 to $1,400 per hour to operate, depending upon what is included."

A Cirrus Jet is obviously not the most economical choice for a Saturday fly-in breakfast, but Jolley has that covered well, since an AirCam on amphibious floats and a restored Piper J–3 Cub share his new hangar. In addition, he has a Carbon Cub kit waiting to be put together as a retirement project.

As he carefully positioned his jet in the hangar after our trip to Florida, Jolley commented on Cirrus as a company and the experience of owning one of their jets: "Although Cirrus is a small company, they are extremely committed to doing things right. I can’t say enough good things about them, and I believe their new jet will change aviation." —By Tom Snow