Get the app Get the app
Already a member? Please login below for an enhanced experience. Not a member? Join today
We will be performing maintenance on our systems Sunday, 10/17/2021, beginning at 12:00 A.M. ET and ending at 6:00 A.M. ET. During this time, you may experience intermittent service outages. We appreciate your patience.
News & Media Ownership: The big hop

Coast to coast and across the pond on UL94 unleaded avgas

In May 1927, Charles Lindbergh launched from Roosevelt Field on Long Island, New York. Thirty-three and a half hours later he, in an aviation first, landed in Paris. In May 2017, Espen Jakobsen took off from the Purdue University airport in Lafayette, Indiana, en route to Zweibrücken, Germany, in a 1950 Beechcraft Bonanza. He landed 33 and a half hours later. The Jakobsen flight was also an aviation first, because the airplane’s six-cylinder Continental E-225 engine burned only UL94 unleaded avgas from Swift Fuels. 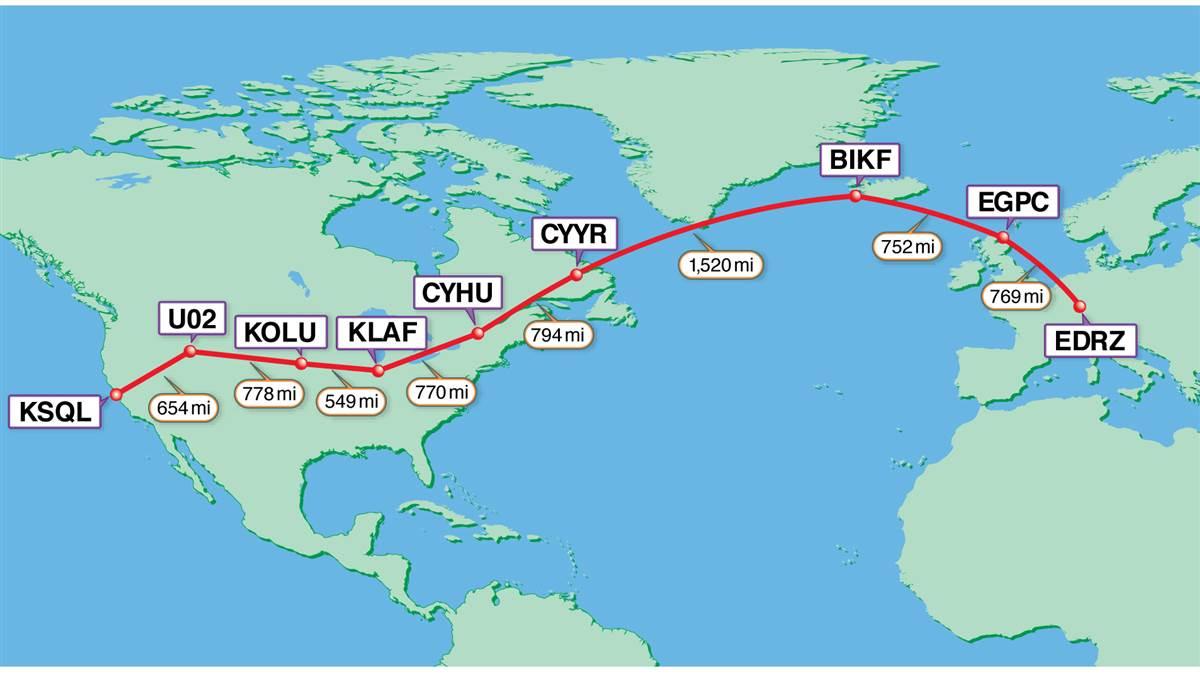 UL94 is Swift Fuels’ step toward a hopeful fleet solution

Swift Fuels’ UL102 is one of two finalists in the FAA’s Piston Aviation Fuels Initiative process, designed to select an unleaded replacement for 100LL. But the company isn’t waiting for fleetwide approval of a replacement to bring an unleaded fuel to market; Swift Fuels has been expanding its distribution network for UL94, a 94-octane fuel designed for lower-compression engines. It can be used in airframe/engine combinations type-certificated to operate on Grade 80 avgas, Grade UL91 avgas, or minimum 80 octane or lower; with an auto fuel supplemental type certificate or OEM-approved for auto fuel; or which have an avgas STC from Swift Fuels.

“It was really fun doing this flight, and it was great to meet the Swift guys and to try out their 94-octane fuel,” said Jakobsen, who added that he didn’t perceive any difference from the 100LL he was used to.

Swift Fuels of Lafayette, Indiana, has been producing and distributing its FAA-approved UL94 unleaded avgas for more than three years. It’s not yet widely available, even though it’s less expensive than 100LL and is an unleaded drop-in replacement fuel for most GA piston-engine aircraft.

It started when Andreas Penner bought a 1950 Beechcraft Bonanza. There was just one problem—Penner lived in Germany, and the airplane he bought was in Lincoln, California. Penner is familiar with Swift Fuels and suggested the company deposit caches of its unleaded UL94 avgas at a series of stops along the route of the coast-to-coast-to-Germany flight. Swift agreed and set forth to address the logistical and operational challenges.

Thomas Albuzat of Swift Fuels Europe picked up Penner’s 1950 B35 Bonanza, N8858A, in Lincoln and flew it to Rabbit Aviation Services on the San Carlos airport to defuel the remaining 100LL before topping the tanks with UL94. Although UL94 is approved for use in more than 65 percent of the general aviation fleet, Rabbit is the only UL94 vendor west of the Rockies. Albuzat’s planned route meant that UL94 had to be shipped to Blackfoot, Idaho, and to Columbus, Nebraska, for the flight to Lafayette to equip it for “the big hop” from Newfoundland to Iceland. Two 55-gallon drums of Swift UL94 were shipped to Goose Bay. Smaller 16-gallon drums were also shipped to Iceland by air freight from the Swift GmbH warehouse in the Netherlands.

The Bonanza carried 64 gallons of usable fuel, including its pair of D’Shannon wingtip tanks. That’s enough fuel for each portion of the trip except one—the “big hop.” An aluminum “box” was built and installed to support the bladder-type fuel tank needed to increase the capacity to 135 gallons.

Jakobsen, a 43-year-old Norwegian living in Switzerland, flies a VIP Boeing BBJ and a Global Express for a living and has experience with transatlantic flight. “I’m not really a ferry pilot, but love doing these flights now and then. My wife, not so much,” Jakobsen said. He would take the airplane on from Indiana.

A couple of weather windows came and went because the modifications to the airplane weren’t yet finished. But by May 24, 2017, at 9:40 a.m. local time, Jakobsen was on his way. He launched from Purdue into three days of forecast good weather.

During the first leg to the Montréal airport, Jakobsen tested his homemade rudder trim device—a one-inch by two-inch board that was just the right length to add a little right rudder. “What a relief to not have to sit with my foot on the right pedal for the next 30-plus hours,” he said.

The two hops from Lafayette to Goose Bay took 10 hours and 50 minutes. He landed at the Happy Valley-Goose Bay airport with 18 gallons remaining.

On the morning of May 25, the weather prediction from the Canadian meteorology office looked good. In addition to favorable weather along the route, his en route alternate—Narsasuaq, Greenland (BGBW)—also was predicted to stay open. The aircraft had been refueled from Swift barrels the night before, with some help from Woodward Aviation.

Flight planning predicted an eight-hour-and-27-minute flight. The fuel load was sufficient for 12 hours.

“After getting all the stuff packed back into the aircraft, myself in the survival suit, and the raft to my right, there wasn’t much more space left in the aircraft. With the PLB [personal locator beacon] stuffed inside the suit, I was ready to go,” said Jakobsen.

“About an hour south of Greenland, the headwind started to increase, and I could see the ETA starting to slide away into the future. Was the fuel sufficient with this wind? Was it stronger ahead?” said Jakobsen.

He used a Golze Engineering ADL 140 Iridium datalink weather receiver with an integrated satellite antenna, and Wi-Fi interface to an iPad. This tool gave him the ability to view weather depictions, and wind velocity and direction along the route. The ADL140 also sent position pings every 10 minutes, and enabled him to send and receive text messages.

Despite the headwinds and altitude deviations for ice, the flight went well until he was within minutes of landing after more than 10 hours aloft. Reykjavik ATC directed him to hold for one turn for spacing behind arriving airliners before shooting a WAAS GPS approach into Reykjavik. The ILS was out of service for maintenance. “I was super happy having the WAAS capability, but it did feel crazy having to hold after such a long flight,” said Jakobsen.

The Big Hop took 10 hours and 25 minutes—98 minutes longer than planned. He had burned 111 gallons of fuel before touching down with 16 gallons of fuel remaining in the tanks.

On May 26, after an hour and a half of pumping fuel from the distinctive green 16-gallon cans of Swift UL94, Jakobsen firewalled the throttle at 10 a.m. Next checkpoint? Wick (EGPC) in Scotland.

He again encountered strong headwinds from the east, which reduced groundspeed. Jakobsen descended to 5,000 feet for relief from the headwinds. After being aloft for five hours and 34 minutes he touched down and wiggled out of his exposure suit for the final time.

After a 45-minute refueling stop in Wick to add 31 more gallons of UL94, Jakobsen turned to a southeast heading direct to the airport at Zweibrücken. As the sun set over his shoulder he touched down in Germany, concluding a 49-hour, 33-minute flight across the North Atlantic in a 67-year-old airplane burning nothing but unleaded 94-octane avgas.AOPA

Steve Ells is an aircraft owner, A&P, and aviation writer.