Get the app Get the app
Already a member? Please login below for an enhanced experience. Not a member? Join today
News & Media Kittyhawk teams with Jeppesen

One of the most recognizable names in manned aviation navigation has teamed up with Kittyhawk, a drone services provider, to hasten access to controlled airspace under Part 107. 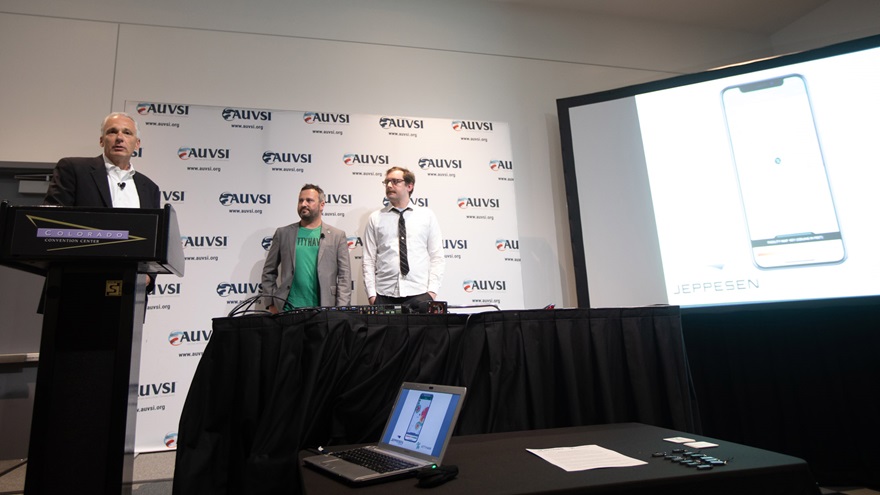 Boeing subsidiary Jeppesen is among the mainstays of general aviation, producing charts and other navigation products for pilots, and Kittyhawk has been striving to become much the same thing for drone pilots, providing a range of services including real-time video streaming, automated flight logging, fleet management, crowdsourced checklists, and related services through its online platform.

“We’re building products that let those operators be aviators without even knowing it,” said Kittyhawk CEO Jon Hegranes during a press conference May 1 at the Association for Unmanned Vehicle Systems International Xponential convention in Denver. “It won’t be too long in the future that we don’t differentiate between manned and unmanned.”

“We really like where they’re headed on the commercial side,” Abbott said of Kittyhawk.

The collaboration will allow Kittyhawk customers to quickly access controlled airspace flight authorization through the FAA Low Altitude Authorization and Notification (LAANC) program, which is coming online at selected airports across the country this year. The FAA plans to allow certificated remote pilots to obtain permission to fly within defined limits inside of Class B, C, D, or E airspace by securing permission in a matter of minutes, a process that previously required weeks—or longer.

Abbott said that Jeppesen is interested in gaining a foothold in the fast-growing unmanned aviation sector, and particularly supporting and serving safe, responsible drone operations. The FAA—and others—believes that allowing access to controlled airspace in a reasonable amount of time will encourage all drone pilots to follow the rules.

“I certainly think that if there’s a perception of unsafe operations, one of the things you don’t want to do is ignore it,” Abbott said, adding that Jeppesen hopes to “bring everybody together, be there for pilots whether they be flying manned aircraft, or unmanned.”

Hegranes said the LAANC collaboration with Jeppesen is expected to be the first of many such efforts, and Kittyhawk looks to become for drone pilots what Jeppesen has long been for manned-aircraft pilots.

“Jepp charts for Kittyhawk drone pilots is a great way to think about it,” Hegranes said. “We see this as a first step toward a lot of capability.”