Get the app Get the app
Already a member? Please login below for an enhanced experience. Not a member? Join today
News & Media short work

Nobody knows exactly when and where the first short takeoff and landing (STOL) competition took place. Alaskan pilots talk of landing contests on the beach in Kenai during the 1970s. An annual competition was held in Gulkana from the 1980s to about 1993. The Valdez Fly-In and Airshow—considered by many to be the grandfather of today’s STOL events—did not start until 2003.

If you’re thinking about attending the 2018 Valdez Fly-In and Air Show, May 11 to 13 at Valdez Pioneer Field in Valdez, make hotel reservations now—or plan to camp under wing on the ramp (air mattress recommended). Frank Knapp is returning to defend his title. Schedules and information may be found online (www.valdezflyin.com).

Flying from the Anchorage area, head southeast through the Portage Pass, and follow Prince William Sound to Valdez. From the north or west, go to Gulkana and follow the Richardson Highway—and the Trans-Alaska Pipeline, which ends in Valdez—south to Thompson Pass, and then west. Weather can be tricky, particularly in the coastal environment, and pilot reports are appreciated.

It’s not certain that STOL competitions even started in Alaska, although it’s a good bet they did. While most of the forty-ninth state’s airports have adequate runways, a 400-foot-long beach might be the easiest access to a prime hunting range, or the fishing is best beside that short gravel bar. Alaska arguably is home to more real-world short takeoffs and landings than anywhere else in the world, and flying guides have only a brief window to hone their skills between winter’s end and hunting season.

And the Valdez event has a lot more to offer than STOL takeoffs and landings, although they garner most of the attention. For many Alaskan pilots, the three-day fly-in marks the end of winter and beginning of a short summer season.

Friday is arrival day, sunny and clear, and Valdez Pioneer Field takes on the vibe of a scaled-down EAA AirVenture—except for the Chugach Mountains towering just to the north. Stacy Young, who flew to Valdez with her husband, Rich; two daughters; and a friend, is pitching a tent beside their Cessna 185. They’ve never been to Oshkosh but would like to go, she says. “That’s in the summer. But it’s summer here, and we don’t want to leave.”

Nearby, friends Pete Van De Hei and Jeff Harrison of Fairbanks sit in folding chairs in front of their Piper Super Cubs. Harrison got back into flying last May, with Van De Hei’s encouragement, Harrison explained.

Chris Larsen offloads fuel from his Cessna 180 to reduce weight for the competition. “I’ve never competed here before,” says Larson, who’s had his airplane for four years and finds it indispensable. “In Alaska there’s the road system, and there’s everything else.”

A 1945 Curtiss C–46 Commando operated by Everts Air Fuels arrives from Fairbanks for display. The company uses four to fly gasoline, diesel, and fuel oil into remote villages—2,000 gallons at a time—and has several others for parts.

Friday’s chamber of commerce weather is gone by Saturday morning, though, replaced by a low marine layer that cuts off late arrivals. It forced cancellation of the poker run fly-out, with its popular landing at Hook Point Beach, a long, sandy intertidal beach. But the clouds lift above VFR minimums for the afternoon STOL competition, which uses a 500-foot pattern.

Fifty aircraft register for the five STOL classes, and are divided into flights of no more than five. Scoring is based on the best takeoff and landing pair; under the Valdez STOL rules, takeoff begins from the starting line, and judges measure where the main wheels leave the ground; on landing, mains cannot touch down before the line, and distance is measured to where the mains stop. The competition is tight; in the Light Touring class, a distance of only 13 feet separates first and third places.

But it is a diminutive, highly modified Piper Cub that captures the attention of 2,500 people braving steady 15-knot winds, temperatures in the low 40s—and, late in the day, a cold drizzle. Flying slowly in ground effect along the taxiway parallel to Runway 24, toward a white chalk line bracketed by bright orange cones, one wing tip dips, then the other. The nose rises, then starts down. Its tundra tires plant firmly just beyond the line, and the airplane stops 10 feet 5 inches from the mark—setting a new short-field landing record for the event. 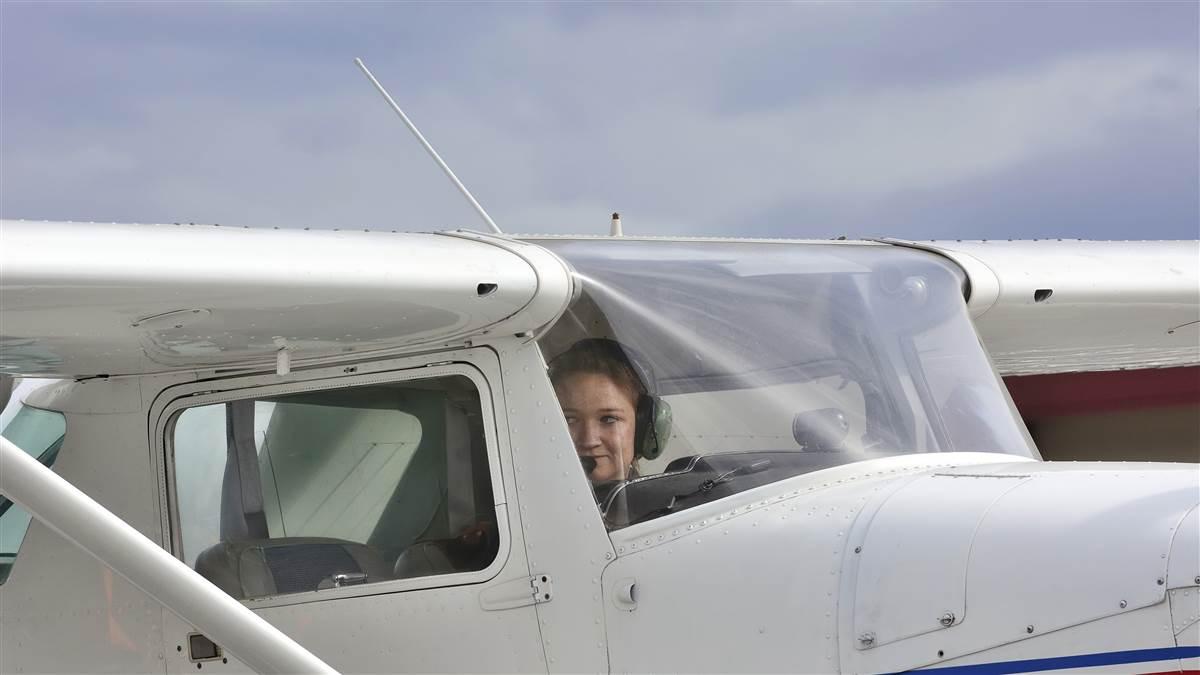 Lydia Jacobs, 19, flew her Cessna 150 to Valdez from Corinth, Maine. The trip took Jacobs, who began the trip as a 450-hour private pilot, 60 flight hours over 17 days. She sold her car for gas money. Since then, she has completed her commercial certificate.

Jacobs said she had to power through a lot of adversity on the journey, and that many people she met were skeptical she could get to Alaska—skepticism that didn’t diminish until she got much closer to her destination.

She competed in the STOL contest’s Light Touring class. Her score of 277 feet (takeoff, 126 feet; landing, 151 feet) placed her 118 feet behind third place, but she was happy with her performance. “Both of them are a personal best,” she said. She also was commended for going around when airplanes in her heat bunched up.

Jacobs spent the summer in Anchorage, working on the dock for a Lake Hood seaplane operator, and then headed south in her 150, where she toured the lower 48—including a visit to the site of the Wrights’ first flights at Kill Devil Hills, North Carolina. “You’ve got to be grateful for what they accomplished,” she said. Her parents accompanied her across the country in their RV. “It was a lot of fun.”

After that, Jacobs landed a job flying a Piper Cherokee Six in Kodiak, Alaska. “I’ve been flying almost every day. It’s awesome,” she said. “I’ve more than doubled my flight time since I got up here.”

Flying to Valdez was a huge milestone in her career, she said. “And getting there has helped me. The reason they hired me was that I’d flown across the country. They said they’d take a chance on me, and it’s worked out.”

She probably won’t make it to Valdez this year, but hopes to return next year with a Cessna 170 or 180. Her trusty 150? It’s in Tennessee right now, where her father is using it to earn his private pilot certificate.—MC

Frank Knapp’s Little Cub, competing in the Light Sport class, had taken off in 14 feet 7 inches for a total score of 25 feet—winning both the class and the event. The overall second-place combined distance was 75 feet.

On Knapp’s first attempt, he took off in 17 feet and landed in 13 feet 8 inches, for a slightly higher score of 30 feet.

It was a long journey to the fourteenth annual Valdez Fly-In for Knapp and his wife, Kristine, of Palmer, Alaska. They built the airplane in 2012, and first competed in 2013. That December they had a hangar fire. “It took out our 60-by-60 hangar and three airplanes, one of which was Little Cub,” Knapp said. “We spent a month on the hangar. Not really rebuilding—it was 17 below—but we had to recoup things. Then the next three months we spent together, 15-hour days, rebuilding Little Cub. It was a total mess.”

The couple completed the rebuild, came back to Valdez, and won the overall competition. But they skipped the 2016 event. “We did five mods. [My wife] reminded me that you only do one at a time. A couple of them didn’t work out very well. I couldn’t get it rebuilt enough to get it here. We put a lot of mods into it, and ultimately we threw a lot of mods away.”

Knapp has stuck with the leading-edge slats, and custom flaps. Special landing gear makes a huge difference. “Being able to land now and just drop it on—you know, we stabbed it onto one gear—and have no rebound, that was the TK 1 [Racing’s landing gear]. They just did an awesome job with that.” The Little Cub’s fuselage originally is from a 1939 Piper J–3 Cub. “It started out at 685 pounds with an 85-horse [engine], and it was a well-balanced machine. But you can’t have too much horsepower, so now it’s got an O-320 with about 180 horses, and with the different mods that we’ve put into it, we’re running about 800 pounds.”

What has enabled Knapp to win every time he’s competed at Valdez? “I’ve got a wonderful wife that helps me at every step of the way,” he said.

The 2017 event saw exceptional attendance, said Joe Prax, president of the fly-in. “We had 157 airplanes on the ground Friday night, which is a record for us,” he said. “We had an awesome short takeoff and landing competition. That’s what we’re known for.”

Visitors came from Denmark; Cape Town, South Africa; Tennessee; and Georgia. Pilots flew in from across Alaska and as far away as North Carolina—a pressurized Cessna 210—and Maine, a Cessna 150.

Valdez is well suited to the STOL contest. “We have a steady sea breeze, we’re obviously at sea level, and it’s a little cooler than some other places,” Prax explained. “All of that is conducive to great airplane performance. The biggest thing may be that steady sea breeze—that’s just constant wind that you can fly in.” What’s the secret to winning? “Taking off can be about horsepower, and landing is about pilot technique,” he said.

And if other STOL events are imitation, they’re the sincerest form of flattery. “The STOL competition is getting more popular. It’s been done in Oshkosh, it’s been done in Texas at the [Texas] STOL Roundup, there are getting to be several other places up here that run it as well. I’m all for it—the more the merrier,” Prax said. “Let’s expand this and get more people into flying.” Many use the Valdez rules or a variant, he added. “We’re always happy to help with that.”