Get the app Get the app
Already a member? Please login below for an enhanced experience. Not a member? Join today
News & Media Technique: The last flight to glory

Technique: The last flight to glory

There’s a scene in the movie The Big Lebowski in which Walter Sobchak, portrayed by John Goodman, stands on an oceanfront cliff with Jeff “The Dude” Lebowski and gives a heartfelt, rambling eulogy for his departed friend, Donny. Then, as Walter shakes Donny’s ashes from a Chock full o’Nuts coffee can, the ocean breeze whips them upward and all over The Dude. 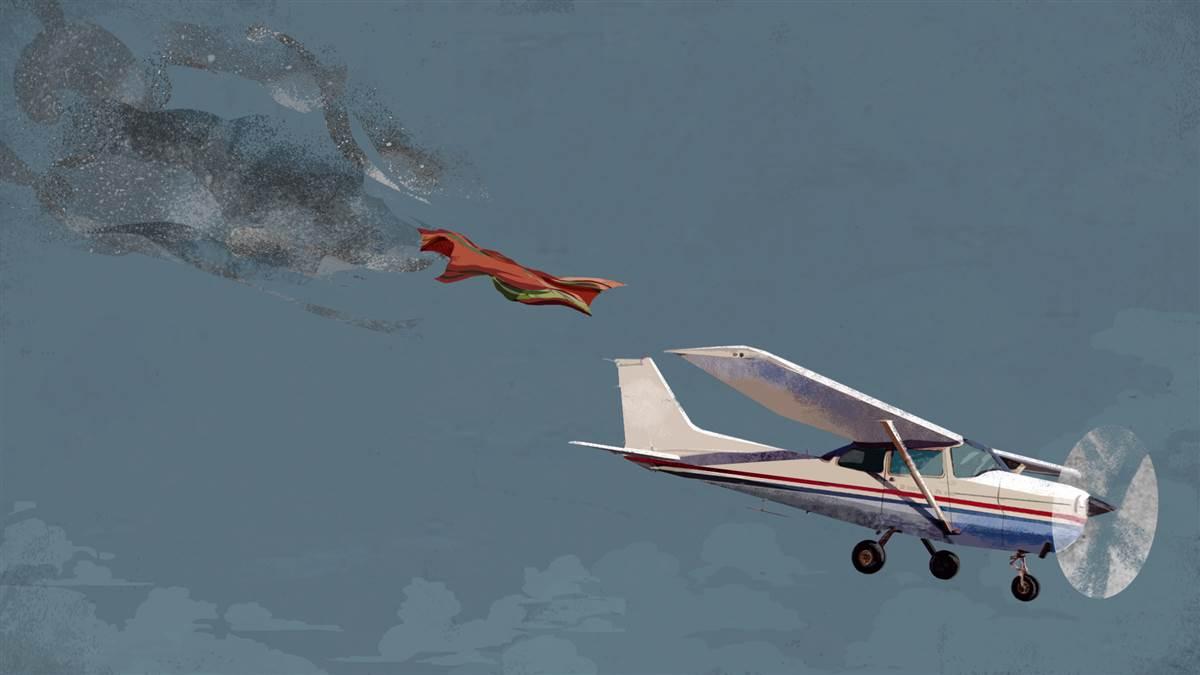 DIY or hire a pro?

Many pilots would like to personally perform this service for a pilot who has “gone West,” but others may want to hire a professional. Don’t assume that all cremated remains disposers know what to do or will treat your loved one’s remains with respect. Certainly, there are good pilots who make a business of scattering ashes from airplanes, are respectful, and know what they’re doing. But, there have been legal actions against some cremated remains disposers who failed to spread ashes as agreed, or just dumped them out in a parking lot.

A sampling of aerial ash-scattering services advertising online charge $500 or more, and often an extra $100 to film the dispersal. This is for a basic service in which they’ll scatter the ashes on their schedule and usually scatter many remains during one flight, although each is done separately and over different spots.

Prices can go into the thousands if the pilot has to fly some distance to a particular place, or if the scattering is to be “witnessed,” meaning that the pilot will arrange to fly over a spot where the family can observe the dispersal from the ground. For more money, family members can fly along and release the ashes themselves.

A professional is often hired when the deceased requested his or her ashes be spread over a special location, such as the Grand Canyon. If the family cannot travel there, the ashes can be sent by mail and the dispersal done by a professional who will video or photograph the dispersal, and usually provide a certificate of the burial and the GPS coordinates where the ashes were released.  —DKJ

This scene illustrates the problem of respectfully spreading ashes when there’s a breeze. Similar problems can occur when pilots attempt to disperse ashes from an airplane into a slipstream. Spreading the ashes of a loved one from the air can be a meaningful and honorable experience, but successfully doing so requires planning.

I imagine many pilots would wish to have their ashes spread over a favorite backcountry landing site, a scenic lake, or local airport. But, these locations have restrictions.

If that backwoods landing spot is on federally controlled public land, you’re required to get permission from the controlling authority. That may be the National Park Service, Bureau of Land Management, or some other agency.

If your chosen site is a lake, river, or ocean, you must follow the regulations of the Environmental Protection Agency. Under the Clean Water Act, to scatter ashes at sea, boats and airplanes must be at least three nautical miles from shore. Only biodegradable items—such as the ashes, flowers, and natural wreaths—are permitted in the ocean. You’re also required to submit a completed Burial at Sea Reporting Form within 30 days.

Local regulations also may apply when scattering ashes on inland rivers and lakes, and you may be required to obtain a permit from whichever agency manages that body of water. Check with your local government.

Every state has some sort of board of funeral directing, and you may be able to find your state’s regulations online.

Spreading ashes at your local airport should be simple: Just notify the management beforehand, walk out to a nice grassy spot, avoiding any moving aircraft, and sprinkle away. As on any private property, get permission from the owner (airport manager) first. And, no one should walk around an airport unless there’s a pilot along who knows the hazards. If it’s a municipal airport you should discuss the dispersal with the management to agree on an appropriate and safe spot on the airport grounds—if it’s even allowed. That may depend on how busy the airport is, the number of people attending the dispersal, and how cooperative the manager is.

If the surviving relatives request an aerial dispersal, then more planning will be involved. The federal aviation regulations do not prohibit dropping items from an airplane, including ashes. FAR 91.15, Dropping Objects, says that no pilot in command of a civil aircraft may allow any object to be dropped from that aircraft in flight that creates a hazard to persons or property. However, this section does not prohibit the dropping of any object if reasonable precautions are taken to avoid injury or damage to persons or property. Pilots may also want to re-familiarize themselves with FAR 91.119 relating to minimum safe flying altitudes.

Blowin’ in the wind

It may seem simple to spread ashes from an aircraft, but this type of mission requires preparation and practice. The most frequent problem is that the swirling breeze blows the ashes around the cockpit and not out a window. One pilot who had assisted a family by spreading the remains of their father from his airplane said, “I was vacuuming his ashes out of my Cessna 172 for years.”

The ashes need to be well away from the aircraft before they’re released into the slipstream. Many people try using a funnel with a plastic tube snaked out a window. This might work in your living room, but not a moving cockpit. While pouring the ashes from a container into the funnel, the breeze catches the ashes and away they go. A better way is to tape a hose to a flexible plastic or nylon bag. After pouring the ashes through the tube into the bag, twist it shut (or use a twist tie) until ready to disperse. Once the tube is well outside the airplane, untwist the bag and shake out the ashes.

Some pilots have made boxes that they’ve mounted under the fuselage, with a cable-operated door, which can be opened in flight. That’s a suitable way to disperse ashes if you want to take the trouble to design and mount such a device. Another pilot mounted a plastic pipe on the strut of his airplane with “doors” on each end that he could open in flight. The ashes were quickly blown from the tube when the doors were opened.

One group in the United Kingdom fills a small parachute with the ashes, rolls up the chute and lines, and then tosses it from an airplane. As the chute opens, it throws the ashes into the wind and settles to the ground. Any ashes clinging to the chute when it is recovered are shaken into the breeze.

I tested two methods that seemed simplest and with the fewest chances to go wrong, using a plain paper bag or a piece of cloth. I cut strips into the top edge of a paper bag so it opens easily, and loaded it with sand as a substitute for cremains. Then, I folded it shut and sealed it with a rubber band until we were at altitude. At 500 feet agl, my passenger removed the bands and threw it downward from the open door of my Super Cub As it fell, it opened and the sand was ejected. When empty, the bag floated gently to the ground. We tried this over our airport runway so we could recover the bag to see if the job was done completely. It was. Do not use a plastic bag unless you are certain you can recover and dispose of it properly.

The second method utilized a piece of cloth. We placed the sand in the center of a one-yard square, folded the cloth tightly, and used rubber bands to keep it closed. We also placed it in a plastic bag until we were well into the flight, just in case. After removing the rubber bands, we dropped it. It fell a few feet before opening and spreading the ashes, then floated to the ground. To be environmentally friendly we used an organic cotton cloth that had not been bleached or dyed. Both the paper bag and cloth method were easy enough to do as a solo job.

Ash dispersal missions have ended in fatal spins into the ground and other less-serious accidents, especially when flying at low levels. In December 2017, a pilot was spreading ashes at the airport in Reidsville, North Carolina. At 50 feet above the runway, the bag containing the ashes broke and the pilot “momentarily let go of the flight controls.” The airplane hit the runway hard and bounced into the air before the pilot took the controls again and landed. On the second touchdown, the landing gear collapsed and the airplane swerved off the runway with substantial damage.

It’s an honor for pilots to give other pilots their last flight, and a touching ceremony and memory for the family members, but make sure your good intentions are accompanied by good planning and good sense.