Get the app Get the app
Get the latest news on coronavirus impacts on general aviation, including what AOPA is doing to protect GA, event cancellations, advice for pilots to protect themselves, and more. Read More
Already a member? Please login below for an enhanced experience. Not a member? Join today
News & Videos Aircraft Maintenance: Top tips to prepare your airplane for winter
Sponsored by Aircraft Spruce

As the days get shorter and the temperatures drop, now is the perfect opportunity for those of us in the northern climates to get prepared for the arrival of Old Man Winter. The colder temperatures bring with them both inconveniences and risks that it’s best to get ahead of before winter arrives in full force. Check out these seven tips for preparing your aircraft. 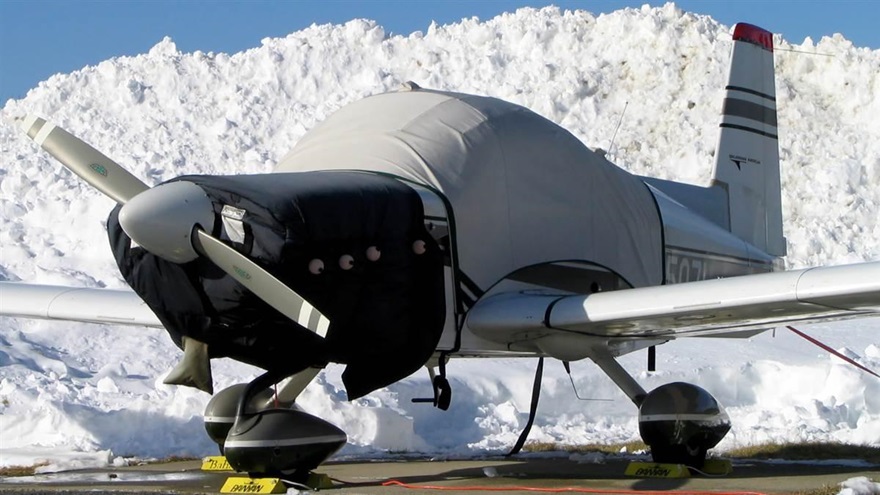 Wash, wax, and detail the exterior

This may be your last comfortable opportunity to clean and protect the paint and windows of your aircraft. Cleaning off all of the residual bugs, dirt, and oxidation has benefits beyond the smile it will put on your face every time that you look at your airplane. Snow and ice readily cling to contaminants on your aircraft’s exterior. A freshly waxed exterior, in contrast, readily sheds ice and snow…at least on the ground during preflight. Don’t forget the windows. Using an aircraft-specific window cleaner and polish helps protect and seal those as well.

Changing your engine’s oil removes harmful acids and contaminants and, with them, any water that is in the mix (at least until your next flight). The oil is doing its job by collecting these contaminants, but it pays to go into the winter with a clean slate. It will also get this task out of the way early in the season so you don’t have to deal with blue fingers while trying to do the job later. If you use straight weight oil, this is your opportunity to switch to a thinner oil for the cold temperatures. Since cold temperatures and winter weather often mean less flying, consider an anti-corrosion additive such as Camguard. I use Camguard regularly and have been very satisfied with the results. Don’t forget to do oil sampling and trend analysis with every oil change.

Most aircraft maintenance manuals include a lubrication schedule and chart. Most aircraft owners have never seen it. Take the time to find yours, obtain the lubricants listed, and apply them according to the instructions. Grease, oil, and other prescribed lubricants are your best protection against excessive wear and corrosion for every mechanism on the aircraft. Lubrication also helps avoid putting unnecessary strain on components that become stiffer to operate in the cold.

Batteries don’t perform well in low temperatures, so it’s important to ensure they are in top condition as the temperatures drop. Beginning with the aircraft’s main battery, have it tested to ensure it is still performing at the required capacity. If it fails a capacity check, replace it. Consider a sealed AGM battery such as the ones made by Concorde. They reduce battery maintenance because they don’t have to be topped off with water. I also recommend using a high-quality, aircraft-specific trickle charger such as a Battery Minder. And, don’t stop at the aircraft’s main battery. Replace every other battery you can think of, including headset batteries, flashlight batteries, and carbon monoxide detector batteries.

Chances are you’ll be using your aircraft’s heating system for the first time in many months. Most single-engine aircraft derive their heat from the exhaust system, so inspect it carefully to ensure that carbon monoxide cannot infiltrate your breathing air in flight. If you have a twin, now is the time to make sure that combustion heater is safe and ready for use.

If you already have an installed engine preheater, test and inspect it to make sure it is working properly. If you don’t have one, consider the convenience one of these systems might provide. If you use a portable preheater, get that ready for use as well. Finally, consider an in-cabin heater. I have a small, fire-safe ceramic heater on a special thermostat that I use in the cabin to keep the interior temps above freezing and reduce the expansion/contraction cycling on the interior plastics and avionics.

Inevitably, we gather all sorts of items in the cabin of our aircraft throughout the year: extra batteries, oil, flashlights, notepads, water bottles, and other extraneous items. This is a great opportunity to take every single portable object out of the aircraft, evaluate it, and re-load the aircraft with the items most important to winter flying. Be sure to include cold-weather survival gear such as an emergency blanket, lighter, and other items. Be prepared for an off-field landing and a potentially cold night in the wilderness.

Preparing for winter is a great excuse for a day at the airport bonding with your airplane. With a little preparation, your winter time aloft will be fun, efficient, and enjoyable. Until next time…happy flying!